I’m not encouraging you to do this trip. It’s probably not entirely safe under any conditions, and if the idea that this trip is “no big deal” gets around, it could have potentially fatal consequences for unprepared hikers. With all of this in mind, you’re probably here because you’re already curious (this page isn’t accessible from the menus on my site, meaning you found it directly or otherwise via a web search), and there’s already some information out there on how to make the crossing. The information on this page is my best effort to make sure that those who have already decided to walk or run to Fire Island do so as safely as possible. 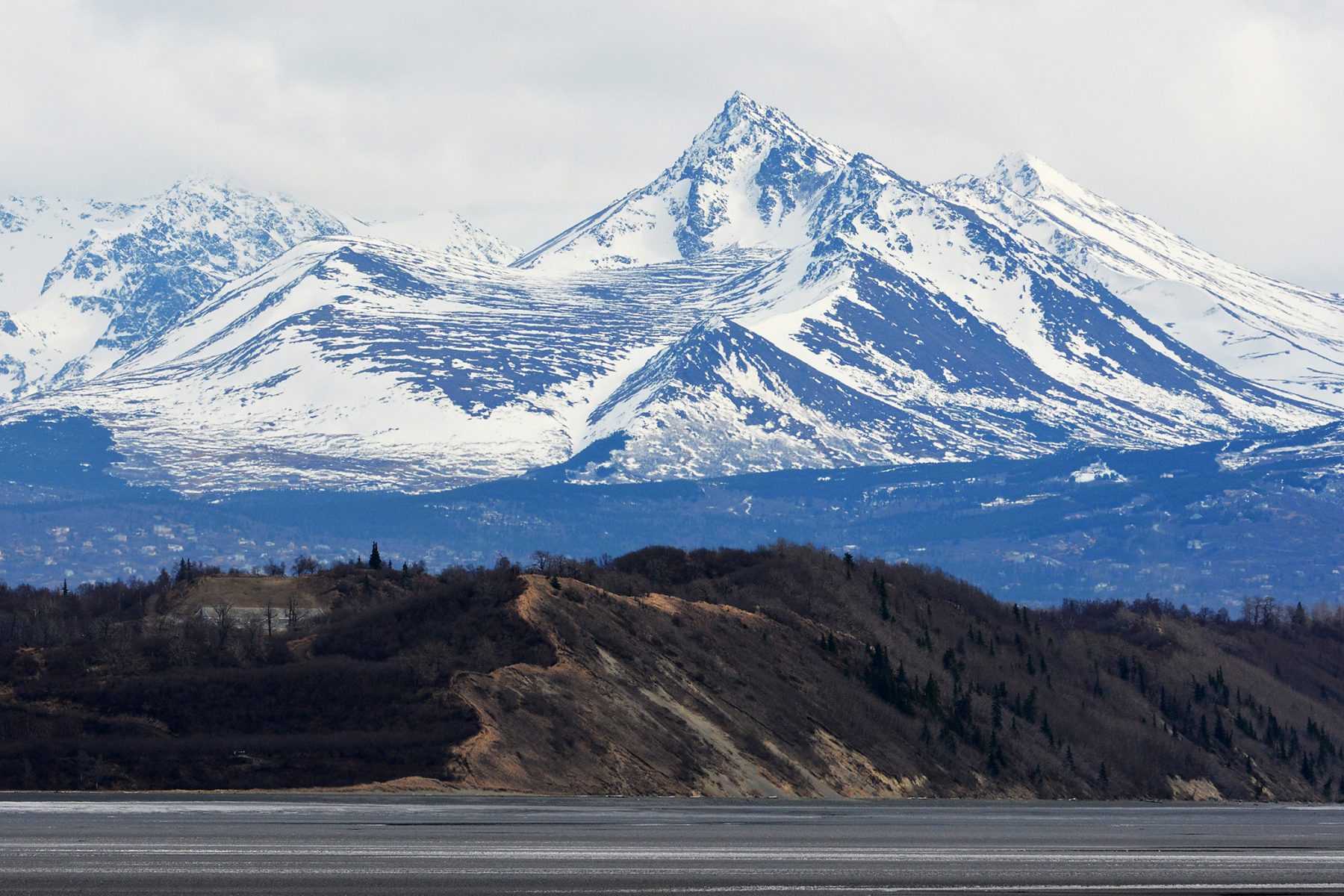 The view of the Kincaid Beach from Fire Island, with the mudflats in the foreground.

When to do the trip

The #1 consideration for doing the trip is the tides. The entire channel may be exposed briefly during normal low tides, but to maximize safety it should only be done when tides are -3 feet (that is negative three) or lower. A -4 or -5 is preferable. These conditions occur for approximately 2-3 days once a month during the summer months. The tide between Fire Island and Kincaid is slightly offset from the official tide predictions at the Port of Anchorage (the tide at the head of Turnagain Arm can deviate from the Anchorage tide by up to +2 hours), and tides can be affected by wind. Check multiple tide tables to make sure that you know exactly when the tides are occurring.

The primary hazard in making the trek to Fire Island is getting stuck—but not in the way you might imagine.

Popular wisdom holds that the mudflats are a form of quicksand, and that wayward thrill-seekers will be sucked into them and trapped without warning. However, anyone who has ventured out onto the flats near Kincaid knows that this really isn’t true. The vast majority of the terrain between Kincaid Park and Fire Island at low tide is firm rippled sand and silt with virtually no give, and provides an excellent platform for walking, running, or even fattire biking. Photos from the construction of the Fire Island Wind Farm [backup] show construction workers and heavy equipment crossing the flats. According to Anchorage soil scientist Keith Mobley, “it’s not any different than walking on a beach in California. If you keep moving, I don’t think you’d have a problem.” In my opinion this may be overstating the safety of the mudflats, but only slightly.

Avoid the sloping sides of V-shaped channels, which predominantly exist adjacent to shore where there is a gradient to the flats. Avoid “eddies” in channels, and avoid “deltas” where one channel spills into another. In these places the water slows down and sediment settles out into a quasi-liquefied muck. Crossing the many shallow channels in the middle of the flats is not an issue, and the footing under moving water in wide channels is usually excellent.

There are two consistently “sloppy” areas of mud on the trip, both of which occur immediately adjacent to the shorelines on either side of the channel. The first is adjacent to the beach at Kincaid Park. This sloppy mud often rises up to about your ankle. The other is adjacent to Fire Island itself. There, the sloppy mud can rise up to your knees, and is underlaid by sand and rock. In neither place is the soft mud grippy or suck-y, but it can be disconcerting.

A quick survey of the literature, including newsworthy rescues and fatalities, suggests overwhelmingly that the primary risk in the trek to Fire Island is not getting stuck in the mud, but getting “stuck” offshore by the returning tide. These tragedies (and near-misses) occur because people attempt to make the crossing at the wrong time, spend too much time on Fire Island or on the flats, or conditions (such as wind) make the return of the tide unpredictable. Of particular concern is the fact that, contrary to intuition, the flats actually fill up from the channels along either shoreline inward, rather than from the middle. It is possible to be in the middle of the crossing and not realize that the channels along the shore are already beginning to refill. 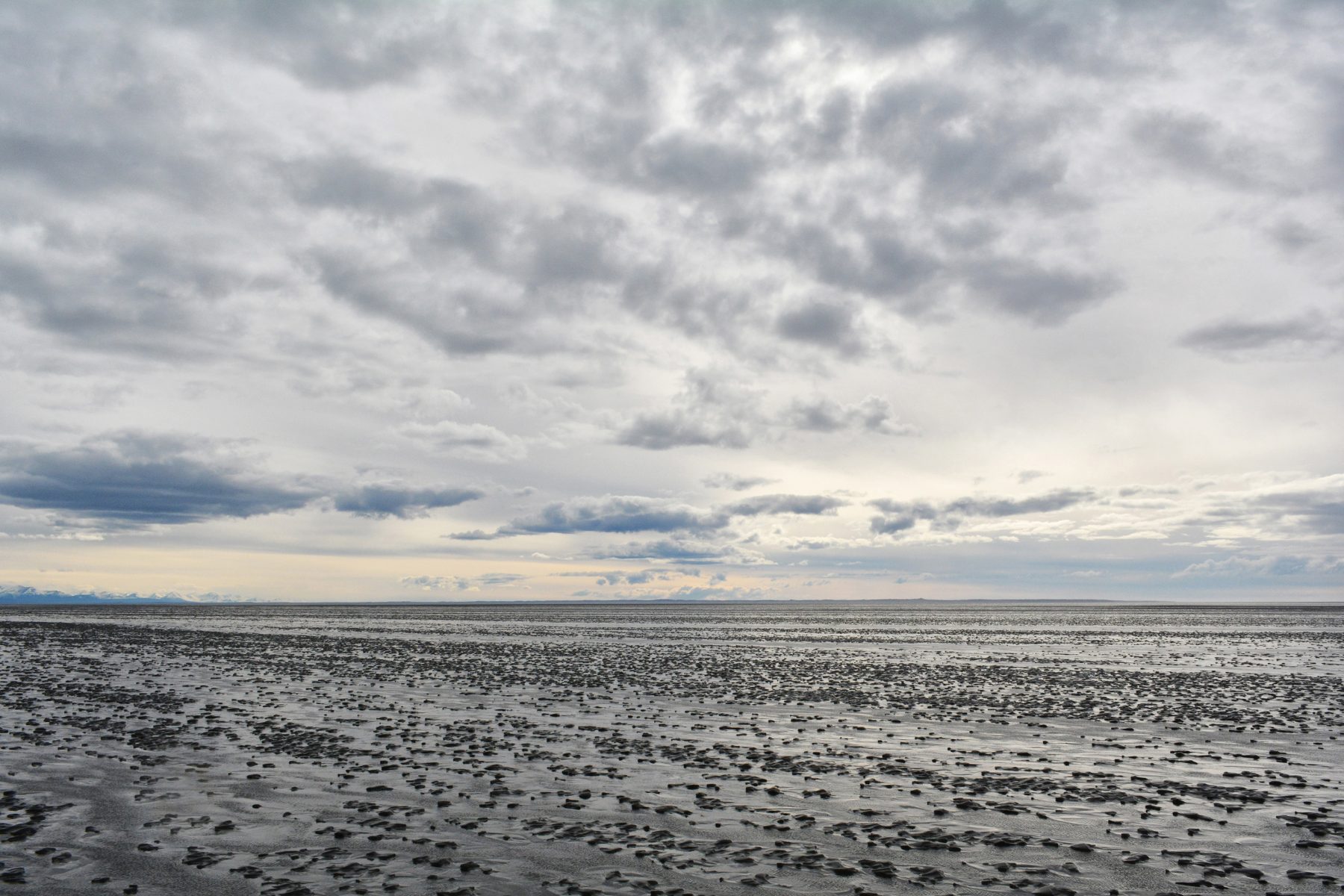 The mud flats between Kincaid Beach and Fire Island can have an abstract and surreal quality, but don’t spend too long taking photos. You need to move steadily to avoid becoming stranded by the incoming tide.

I recommend walking the 50 to 100 feet adjacent to either shore, and running/jogging/trotting/biking during the expanse in the middle. While it is possible to walk there and back, going quickly will maximize your safety. It is important to keep moving the entire time you are on the flats, partly to keep from sinking into liquefied mud but mostly to make sure that you make it back with plenty of time to spare. Fattire biking seems like a reasonable way to cross the flats, though it may be awkward to carry a bike through the soft mud immediately adjacent to Fire Island. If a bike gets stuck in soft mud, do not work yourself into the mud attempting to pull it out. Leave the bike and get to shore.

I would recommend a walking/trekking pole to test the mud in softer areas, and would recommend doing the trip in either light running shoes or (preferably) barefoot. You may want to have sandals for the beaches, which are rocky and unpleasant to walk on in bare feet. I would highly recommend bringing along at least one packraft (including paddle and life jackets) for every two people, in case you are caught out on the flats when the tide comes in.

Plan for Making the Crossing

Again, please keep in mind that this is my best advice for safely making the crossing based on limited experience, and that the mudflats are always changing. This is what I would do if I were making the crossing again, not what you should necessarily do if you want to stay 100% safe. 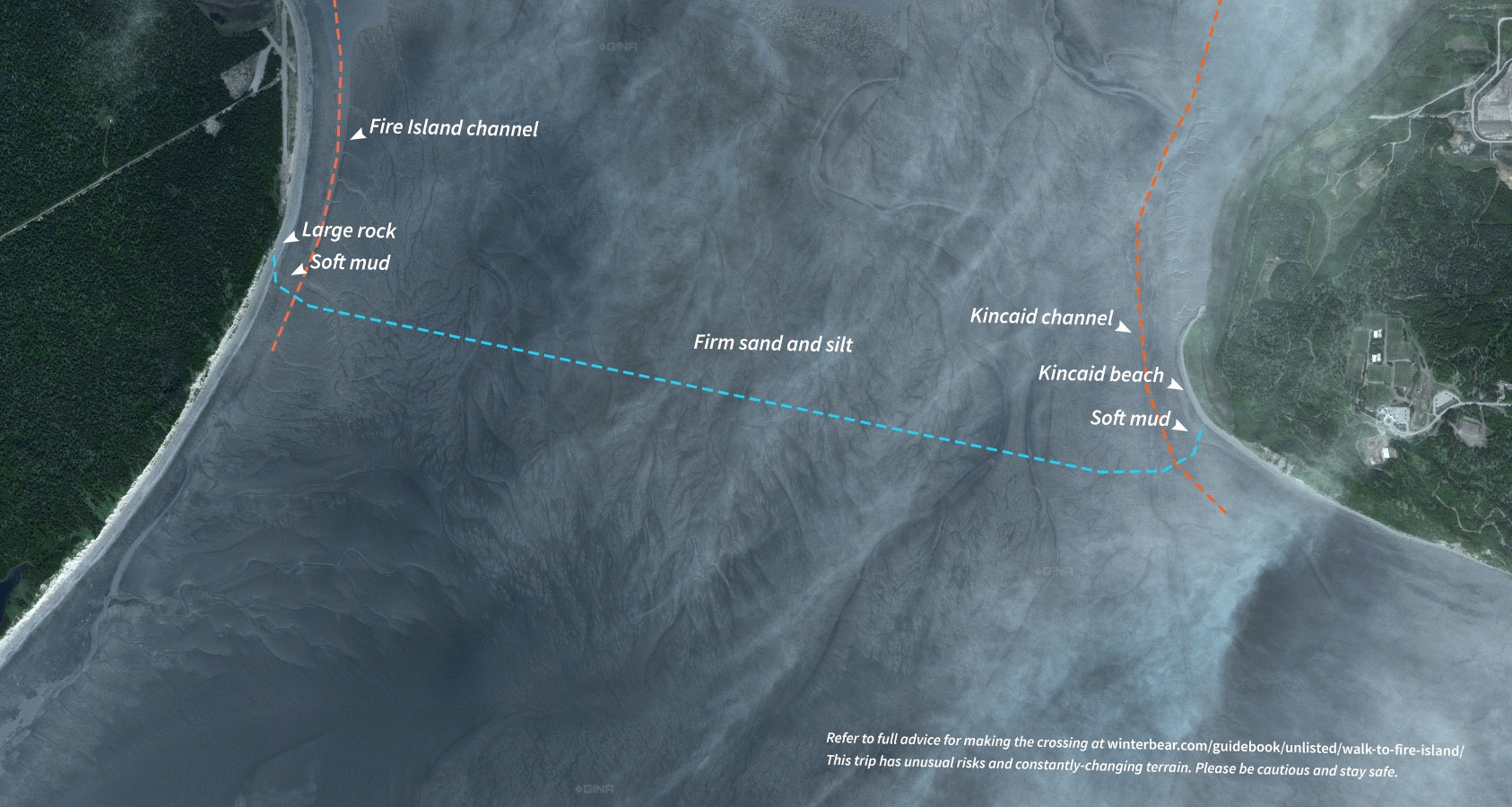 Map of the walk to Fire Island, showing the general route.

There are more rewarding trips than this in the Anchorage area. Whether justified or not, many people will consider you reckless for doing this trip. If you do decide to make the crossing, please stay safe.

Didn’t a girl die in the mud flats several years ago?