A variation on the Bomber Traverse route through the Talkeetna Mountains

Another August rolls around, which means it’s time for blueberry picking, avoiding the State Fair, and heading out on the Bomber Traverse. The snow on the glaciers is usually at its lowest point this time of year, and the days are still long enough that you don’t have to race the sun. True, August weather can be iffy, but these are the Talkeetna Mountains and iffy is as good as it gets.

On August 17, 2017, Brett Frazer, Tim Treuer, Cori Graves and I headed out for a four-day, three-night variation of the Traverse. We planned to meet up with my brother and his friends at the Snowbird Hut the first night, and then head to the Bomber Hut for the next two nights. Normally the Bomber Traverse would include a last night at the Mint Hut instead of a second night at the Bomber, but I thought it’d be great to have a “down day” to explore the backcountry around the Traverse’s remotest hut. Then, on the fourth day instead of pounding out the miles on the Gold Mint Trail, we’d scramble over Bomber Pass and head back to the car via the Reed Lakes trail. This plan would concentrate our time at the ‘Birds (Snowbird Glacier, Snowbird Hut, Snowbird Lake) and the Bombers (Bomber Hut, Bomber Glacier, Bomber Pass), hence: The Birds and the Bombers Traverse.

Map of our Birds and Bombers Traverse route.

We started out on the Reed Lakes Trail in a short-lived spray of semi-sunlight.

Tim Treuer and Brett Frazer moseying up the Reed Lakes trail, just before the cutoff up Glacier Creek.

The scenery in the Glacier Creek drainage is beautiful but shy. This time, the craggy mountains mostly stayed hidden.

At Glacier Pass (also called Snowbird Pass), we were relieved to see the glacier free of snow. Cori and I had headed out to the Snowbird earlier this summer with two friends, on the advice that the snow covering the glacier wasn’t too bad. It was. It had taken us nearly three hours to cross the glacier, postholing up to our waists. This would be much easier.

Cori showing Tim and Brett the route over Snowbird Glacier.

Tim carried out a laminated copy of the Bomber Traverse Map, a project I’ve been talking about for years and finally finished up. The map overlays the Bomber Traverse route, local names, and historic glacier boundaries onto the 2016 USGS topo maps. I’d just gotten the first edition of the map printed and laminated in Anchorage (thank you Service Printing!), and planned to drop off a copy at the Snowbird and Bomber Huts.

Carrying the Bomber Traverse Map to the Snowbird Hut.

As we neared the big red arrow on the moraine below the Snowbird Hut, we had to start weaving across the ice to avoid moulins. Every year we spot new ones, and smaller ones can be hard to see from above. There’s something uniquely ominous about these glacial wells, with their little streams tumbling down into total darkness. They are easily avoided when there’s no snow cover on the glacier, but are nonetheless unnerving.

I got on my stomach, downhill from the moulin, to take this photo.

We woke to find termination dust on the mountains, and dressed for rain. 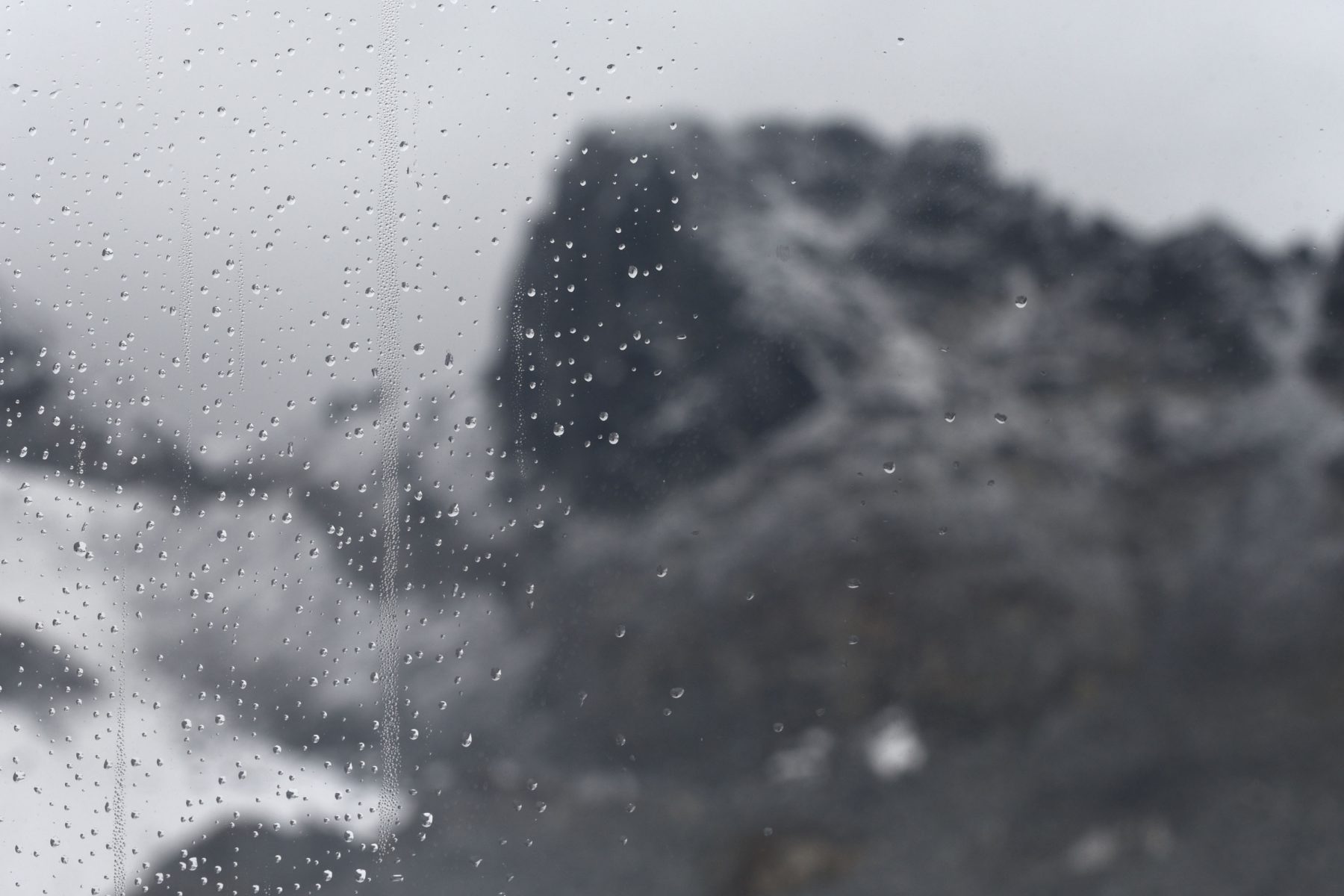 Rain on the window of the Snowbird Glacier Hut.

Before heading out, we assembled everyone for a few group photos. No matter how many times I come up here, this backdrop never gets old.

Cori on a low ridge below the Bomber Hut, with the crags of Parliamint in the background.

We stayed up late playing cards and sipping hot spiced rum. Cori broke out her solar-powered LED lights and we hung a headlamp off the roof next to the old kerosene lamp.

I still don’t know how to play poker.

Brett had lugged out his new DSLR and tripod, and we’d planned on staying up to practice night photography. But outside it was cold, drizzly, and inky dark. The worse it is outside, the more inviting it is inside. Neither of us lasted outside for long.

The Bomber Hut, surrounded by the uninterrupted dark of the Talkeetna Mountains.

After sleeping longer than intended, Tim, Brett and I headed out to explore the backcountry around the Bomber Hut. I was especially curious to scope out the Wintergreen Glacier area, since it seems to have been poorly mapped. The 1950s USGS glacier data (used on USGS maps up to 1994) is now very outdated due to deglaciation, and the 2016 USGS maps don’t show this glacier at all– even though its big blue crevasses are clearly visible in recent satellite photos. There aren’t really any unmapped places anymore, but there are some poorly mapped places, and for someone interested in mapmaking the next best thing.

We sidehilled across the tundra behind the Bomber Hut and made our way up into the vast glacial graveyard below Montana Peak.

Brett and Tim standing above an unnamed glacial lake below Montana Peak.

We worked our way up the boulder field slowly and carefully. A sprained ankle or broken bone back here would be much worse than losing a little time.

Eventually we reached the toe of Wintergreen Glacier, where it spills almost vertically off of the side of Montana Peak and spreads out in a big lobe. Wintergreen Glacier is in rapid retreat, but contrary to the 2016 USGS maps it’s still very much here.

View from the base of Wintergreen Glacier. I can’t imagine that tongue of ice spilling down the front of the glacier will last much longer.

We’d planned to walk the big bench over to Rainy Day Knoll if the weather looked bad, but for now it was holding and we decided to take a chance at our “stretch goal”–the ~6000-foot summit of Ozone, a ridgeline peak north of Wintergreen Glacier. We scrambled into a rocky cirque full of loose boulders and then straight up the side of Ozone, aiming for the western point on its summit crest.

Sitting near the summit of Ozone, with Montana Peak in the background. Photo: Brett Frazer.

Just below the summit of Ozone we found ourselves cliffed out on the ridge. We could have probably figured out a way to weave around the scree and cliffs on the south face of the peak and make the summit, but it would have taken more time than we had. We spun around and headed for home.

Brett and Tim head down the bright green vale between Nelteni and Ozone.

We expected to find at least one other group at the hut by the time we returned. But for the second night in a row, it was just us. Iffy weather has its benefits.

Ending the night with a game of Kings Corner.

Another identical morning: termination dust on the mountains, overcast skies, a bit of sprinkle. We brewed coffee, poured boiling water into pouches of dehydrated food, and made our marks in the hut logbook.

My favorite entry in the Bomber Hut logbook. The entry ends with Chris and Gustav lying in the loft of the hut, where Chris apologizes for leading them up into the wrong cirque in search of the bomber. I tried to look up the illustrator when I got home but he shares a name with a hip-hop producer–the ultimate guarantee of online anonymity.

Before leaving we swept the entire hut clean with a broom so fantastically ragged that it looked like a Tim Burton movie prop. Through the Bomber Hut window we could just make out Bomber Pass, looking craggy and uninviting. It was hard to leave the cozy hut, but the visibility was good and over that pass, the real world was demanding that we return. Before leaving Cori said “I wish we could spend just one more day here..”

Bomber Pass is the low point in the ridge above the glacier.

We crossed the creek below the Bomber Hut and picked our way up the loose moraine below Bomber Glacier, clomped across a pool of wet glacial silt, and finally set foot on hard glacier ice overlaid with a couple inches of crusty wind-blown snow. Ice cleats weren’t necessary but we pulled them on anyway, and trudged up to the twisted wreckage of the B-29 that crashed here in 1957.

Approaching the wreckage of the B-29 bomber on Bomber Glacier.

I remember feeling excited the first couple times I made it to this spot. A bomber! On a glacier! But this time, standing in the drizzle with clouds churning around the snow-laced cliffs, it felt quiet and somber. Six people died here, and for the survivors this place must have felt bitterly cold and hostile.

Twisted propeller on an engine from the crashed B-29.

We traversed down the glacier, hopped over a couple wiggles (shallow S-shaped channels on the surface of the ice), and climbed up to Bomber Pass. Bomber Pass is hard to judge–even after crossing it several times, I can’t decide whether it’s easier or worse than it looks. There are really two low points on the ridgeline, and Tim, Brett and Cori headed up the one on the left. I took the slightly lower pass on the right. I skirted around the edge of the big rubble fans spilling off of the pass, which are very loose because they’re resting on the top of a rapidly shrinking glacier, and then carefully climbed the twenty feet or so to the pass itself. From a purely technical standpoint the climbing probably ranks at Class 4. Tricky, but doable for most fit people comfortable using their hands. Tim reported that their route was no better. 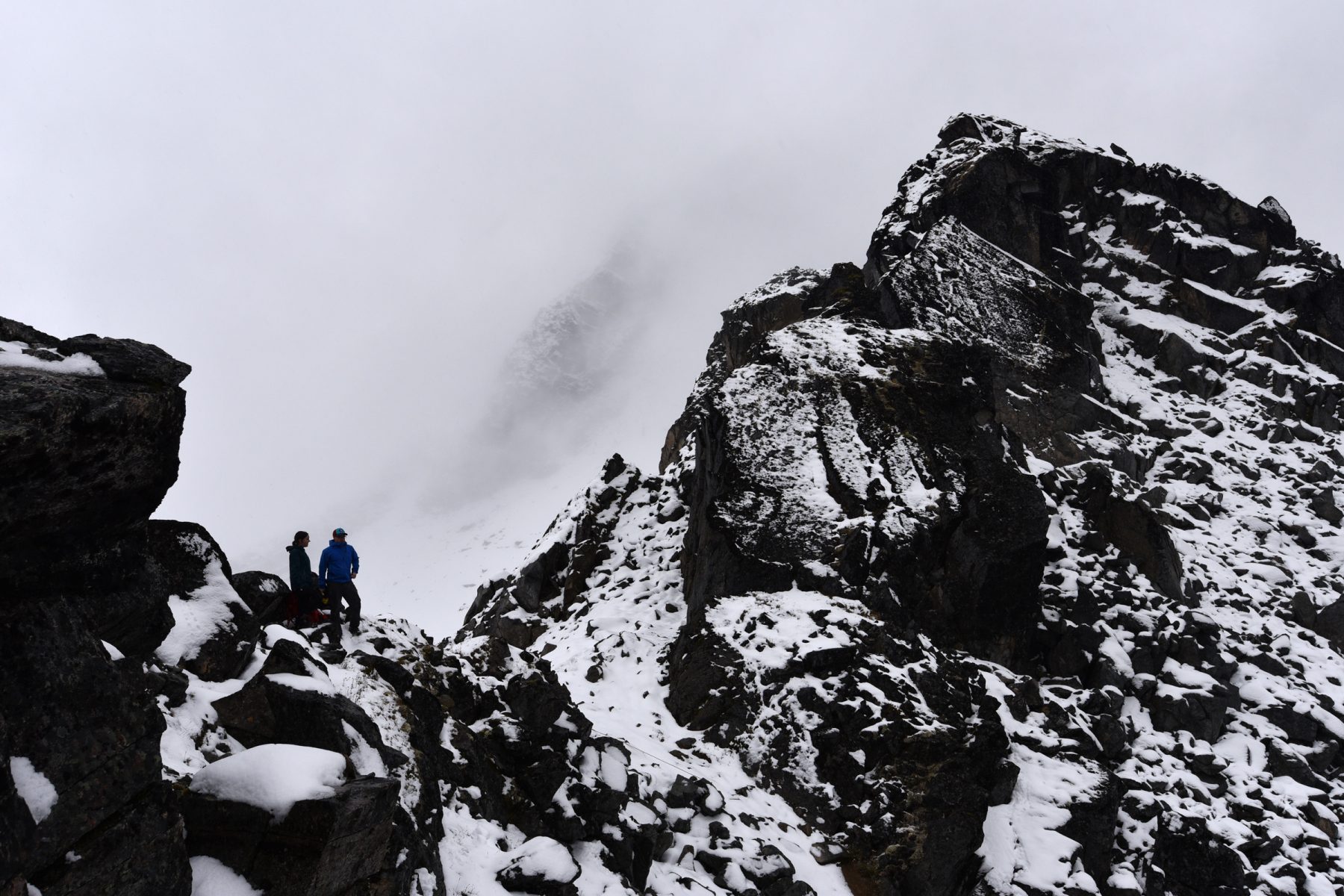 Cori and Brett on Bomber Pass, looking down toward Upper Reed Lake.

Brett, Cori and I scrambled down the large boulder field below the pass, aiming directly for the close end of Upper Reed Lake. The boulders here have had a decent amount of time to settle, but there were still loose ones and the lingering snow slowed us down. Tim traversed around the north of the boulder field and descended on steep tundra. He made much faster progress than us and I made a mental note to test out that route next time.

Dropping down onto Upper Reed Lake.

We regrouped at the edge of Upper Reed Lake, on a zen-looking delta of neon moss and sand interspersed with large rocks. As much as I love tromping through the Talkeetnas, it was great to finally see a trail.

From here, all we had to do was stomp out the last four or five miles to the parking lot on the well-worn Reed Lakes Trail. But man, what a scenic stomp. By any measure the Reed Lakes Trail must be one of the most beautiful day hikes in the state. The drizzle had evidently scared off most of the day-hikers, and we had the upper few miles to ourselves.

Back at the car, we peeled off backpack rain covers, changed socks, and plugged in phones. Even after just a few days, it can be a strange experience getting back into a car. The road keeps looking like a trail and the trees and bushes on the roadsides keep turning into tundra, as if part of your mind has gone feral and isn’t ready to let go of the wilderness.