The September 2018 heatwave was so intense that Alaskans started referring to it as a new season: Second Summer. High-temperature records across the state were shattered, and re-shattered. Outdoorspeople dug gear back out of closets, frantically calculated leave time from work, and headed to the mountains with plans more fitting for July.

On September 8, Greg Martin, Meghan McClelland, Ben Sullender and I set out on a 20-mile hike and packraft loop around Cantata Peak. Since their earliest days packrafts have been used as logistical aids, turning remote bodies of water from obstacles to routes. More recently, packrafters have pushed the limits of these ultralight inflatable boats on big, remote whitewater. But our goal today was a little different: we would use our fleet of Alpacka packrafts to string together a sort of jerry-rigged “lake chain” around Cantata Peak. We’d start with Symphony Lake and Mirror Lake, climb a tall rocky pass between Cantata and Calliope, float an unnamed new lake forming off the toe of Flute Glacier, and end by paddling across Eagle Lake. From a logistical standpoint the plan was a little absurd, as it would probably be faster to leave the boats at home and walk around the lakes. And the flatwater wasn’t exactly a technical challenge. But this was a strange season, and it called for a strange adventure. 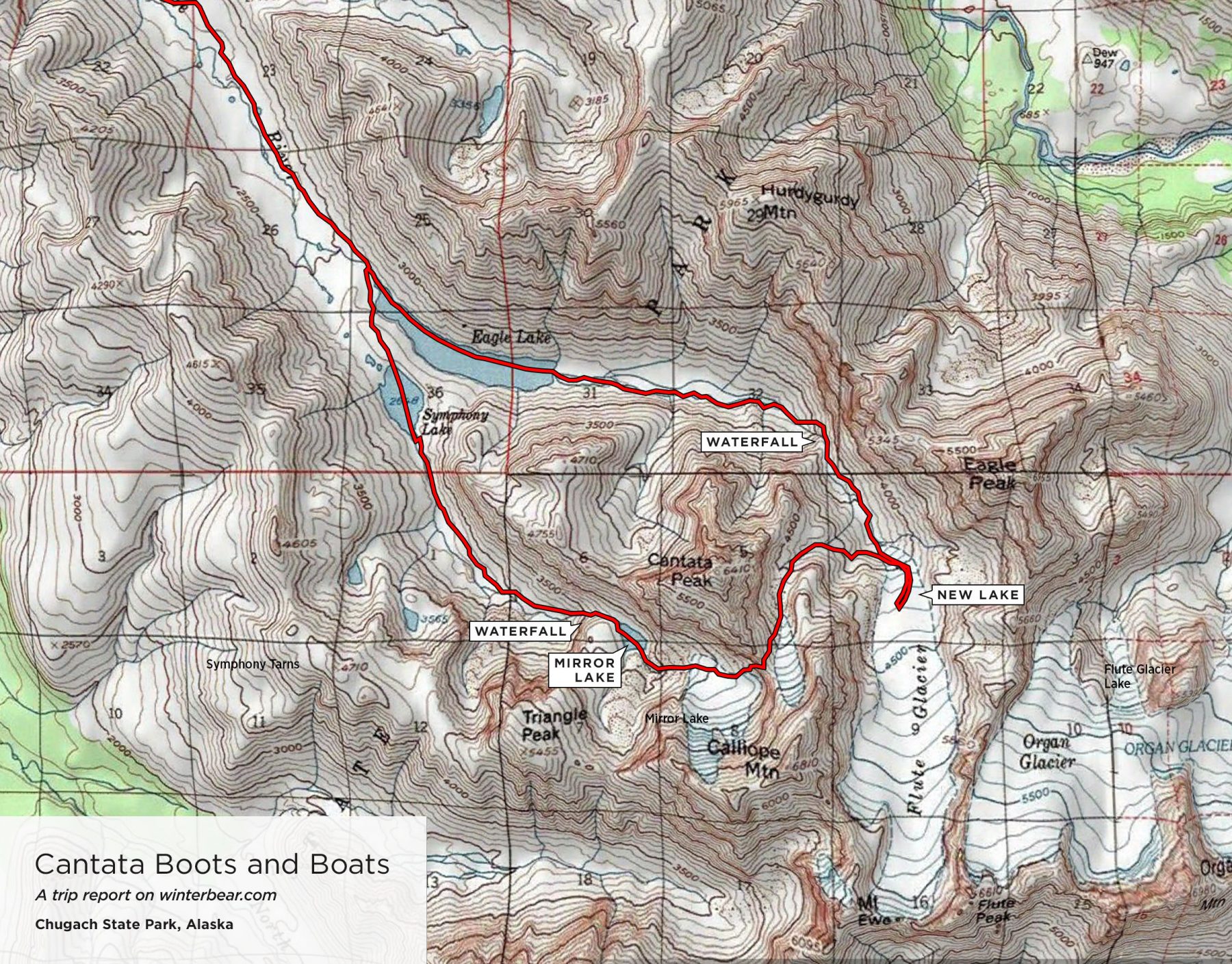 We met at a Carrs parking lot before dawn, our breath misting in the cool air and the black silhouettes of the mountains looming on the horizon. After grabbing coffee and snacks we drove north out of Anchorage and up the switchbacking roads to the South Fork Eagle River trailhead.

The South Fork trail feels more like a highway for the first few miles, and usually I just put my head down and power through it. But this time it was hard not to appreciate the backlit fall foliage, which filled the valley with glittering reds, greens, oranges, and golds. 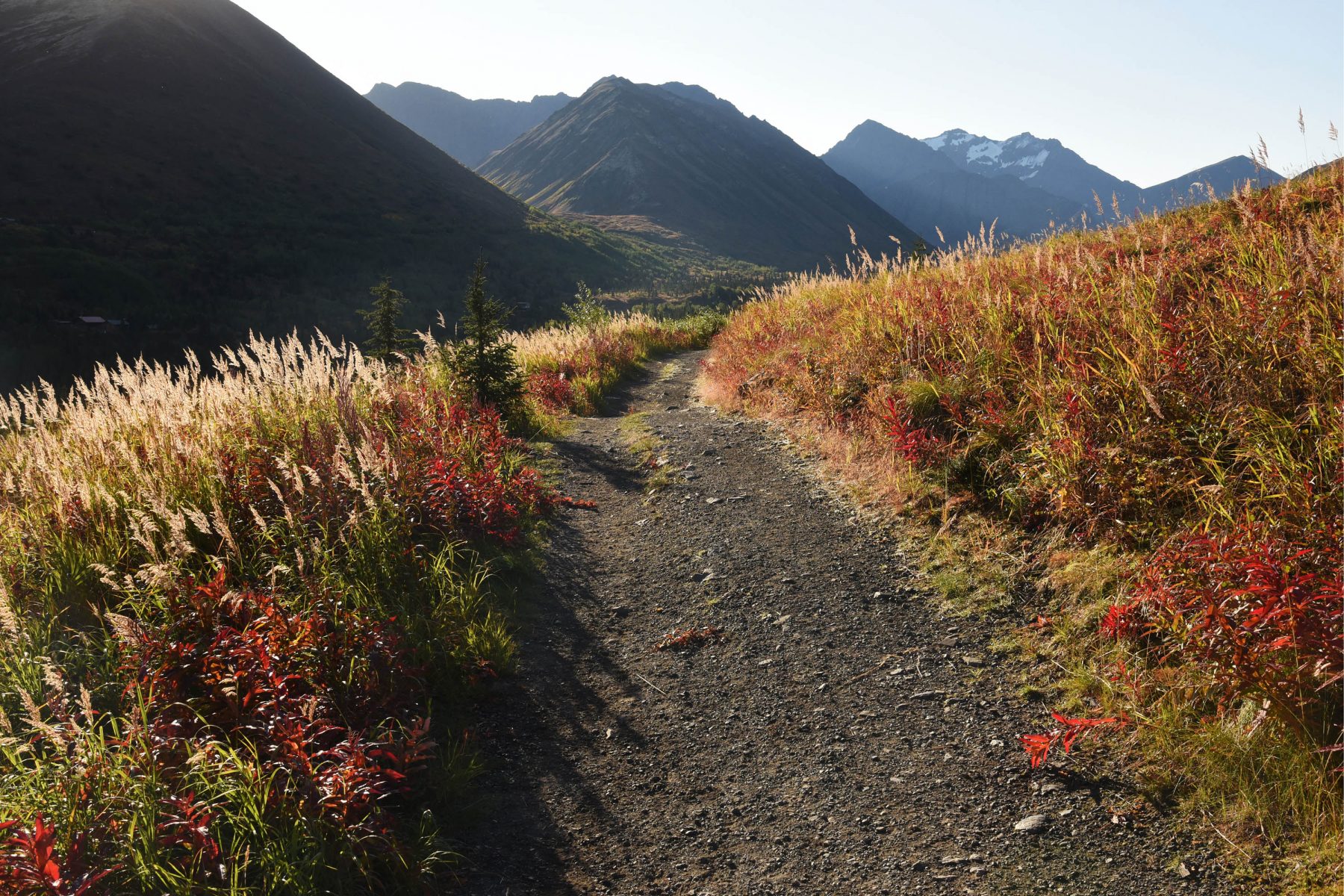 Past the bridge, the trail chokes down to singletrack width as it winds over old glacial moraines and past small stands of pioneering birch trees. With every step the temperature climbed and the day became brighter and brighter. 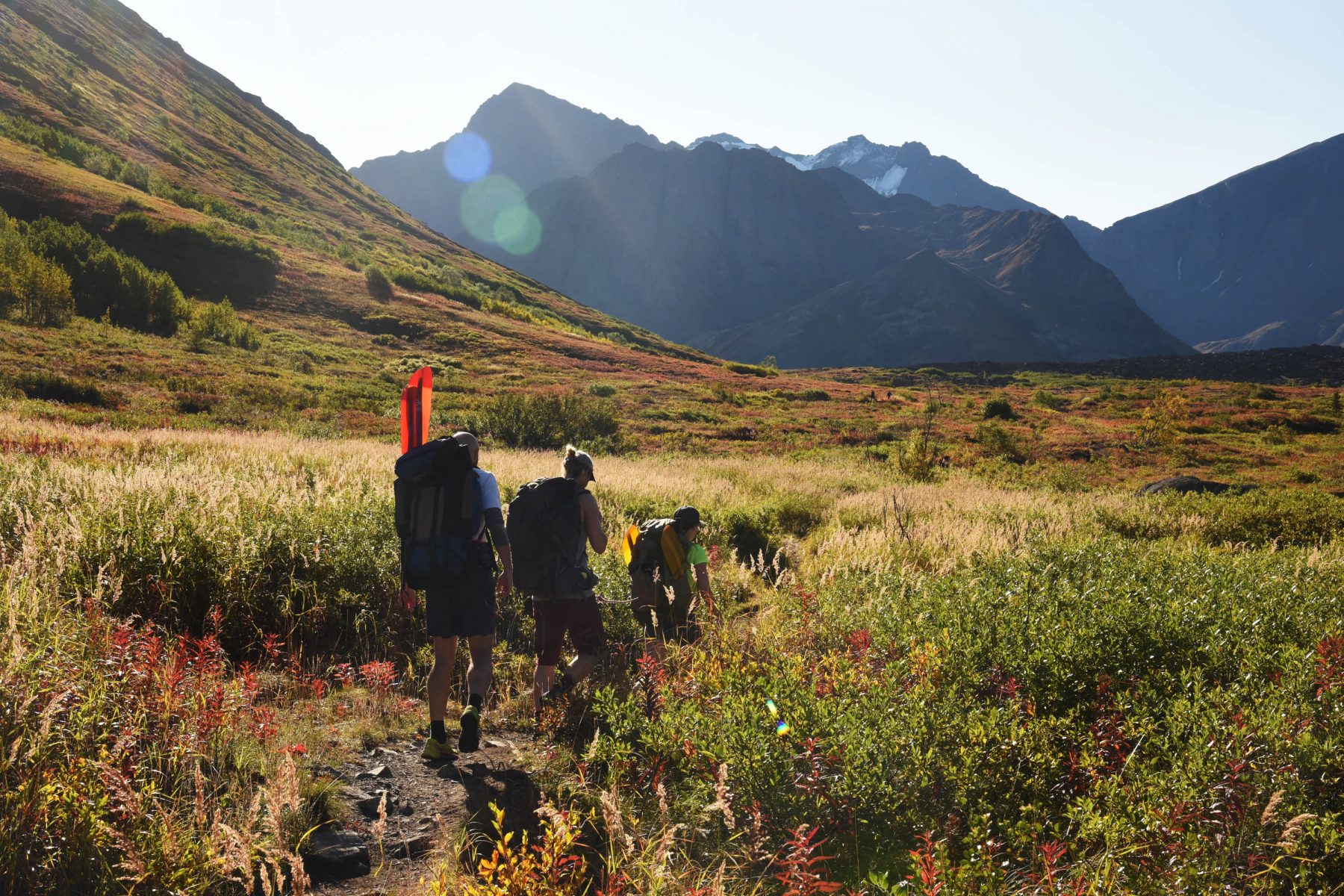 Greg Martin, Ben Sullender and Meghan McClelland on the South Fork trail, with Cantata Peak in the background

Show up and blow up

At the edge of Symphony Lake we dropped our packs for the first “blow-up” of the trip. 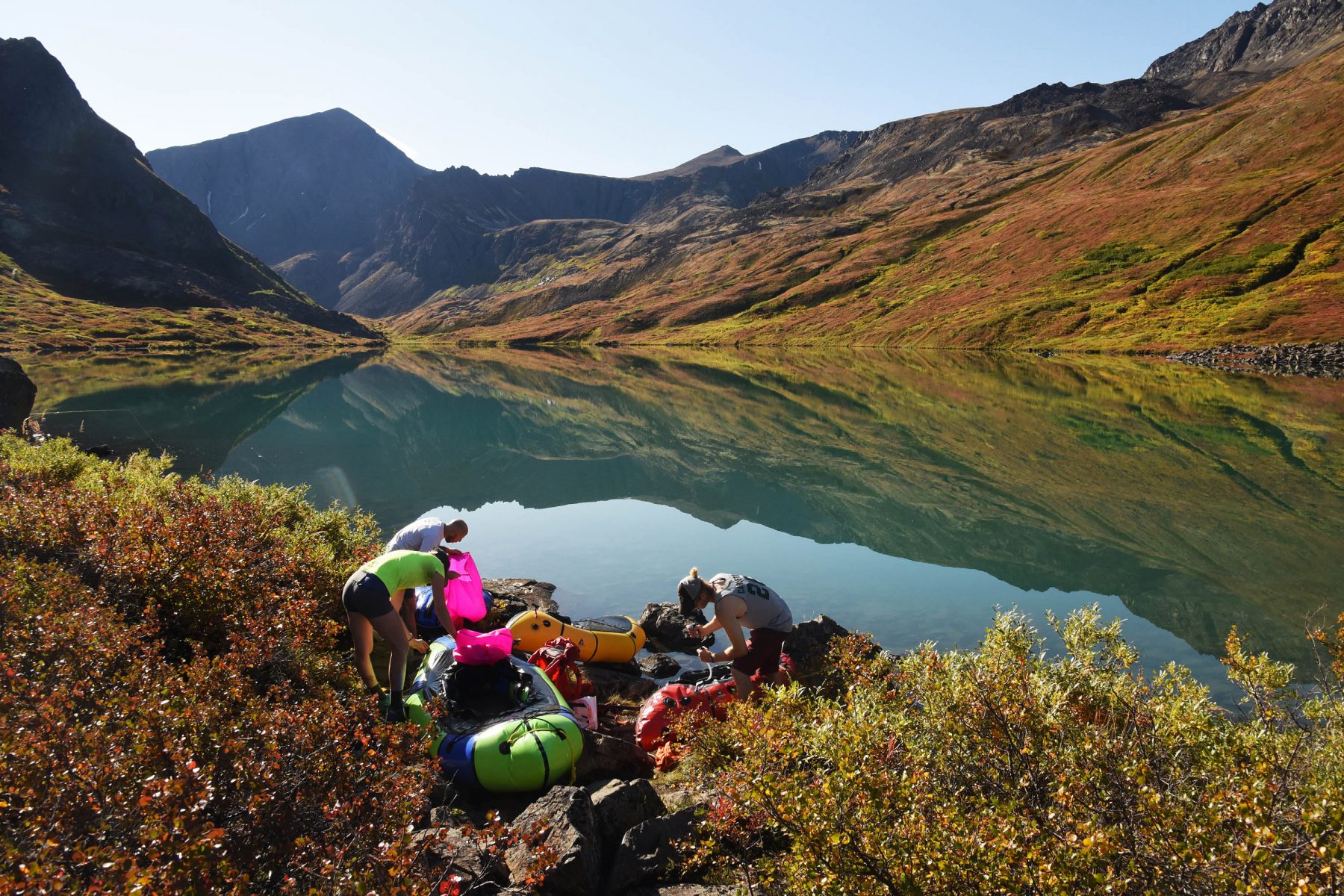 Inflating Alpacka packrafts at the edge of Symphony Lake

It was almost a shame to shatter the perfect mirrored surface of Smyphony Lake with our paddles, but we had lakes to float and passes to climb. 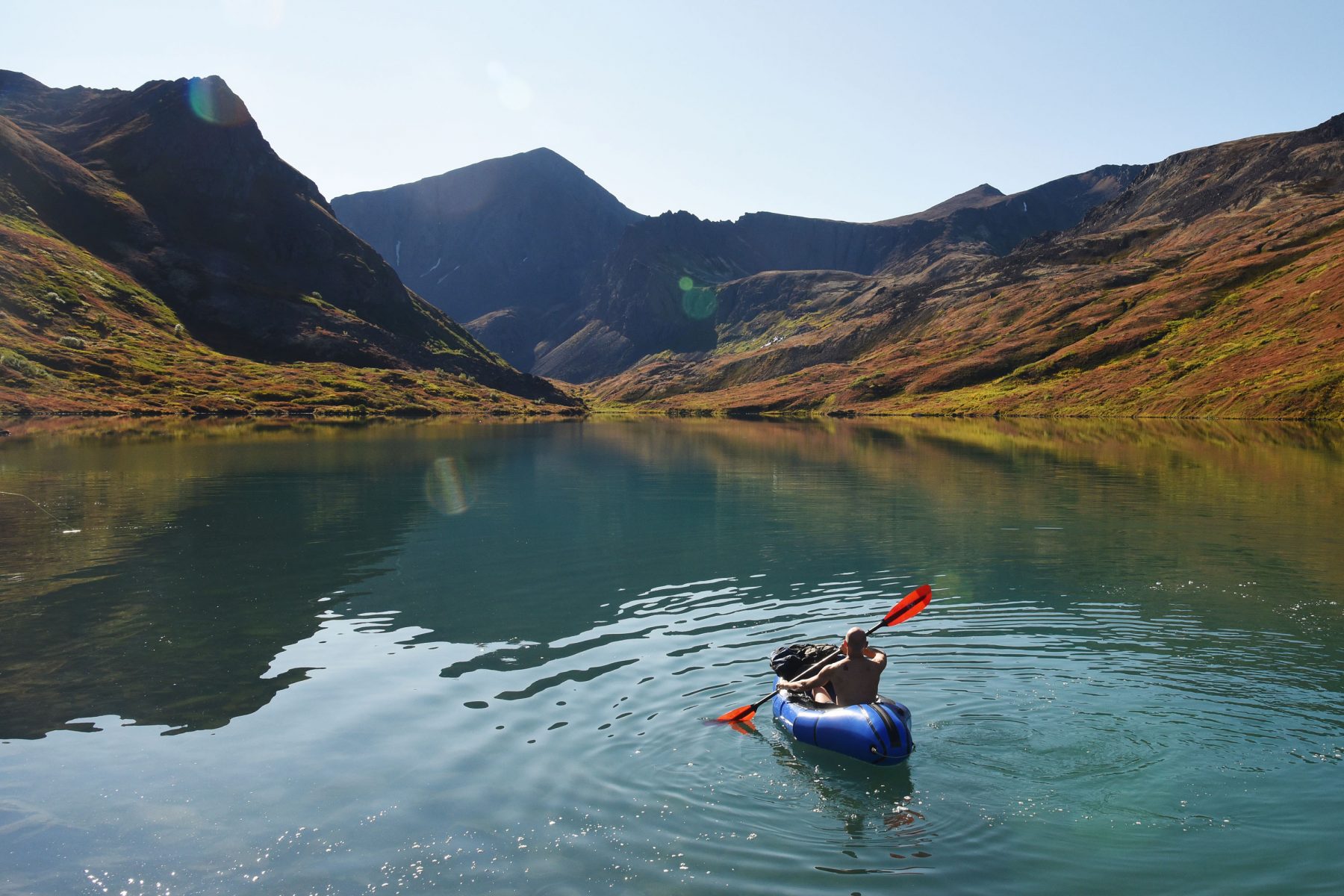 Greg paddling across Symphony Lake in an Alpacka Gnarwhal. A small, superlight boat like the Alpacka Scout would have been ideal for this traverse, but our bigger, heavier boats worked just as well. A good packraft is a very versatile tool.

At the far end of Symphony Lake we deflated our boats and headed upvalley on light game trails. 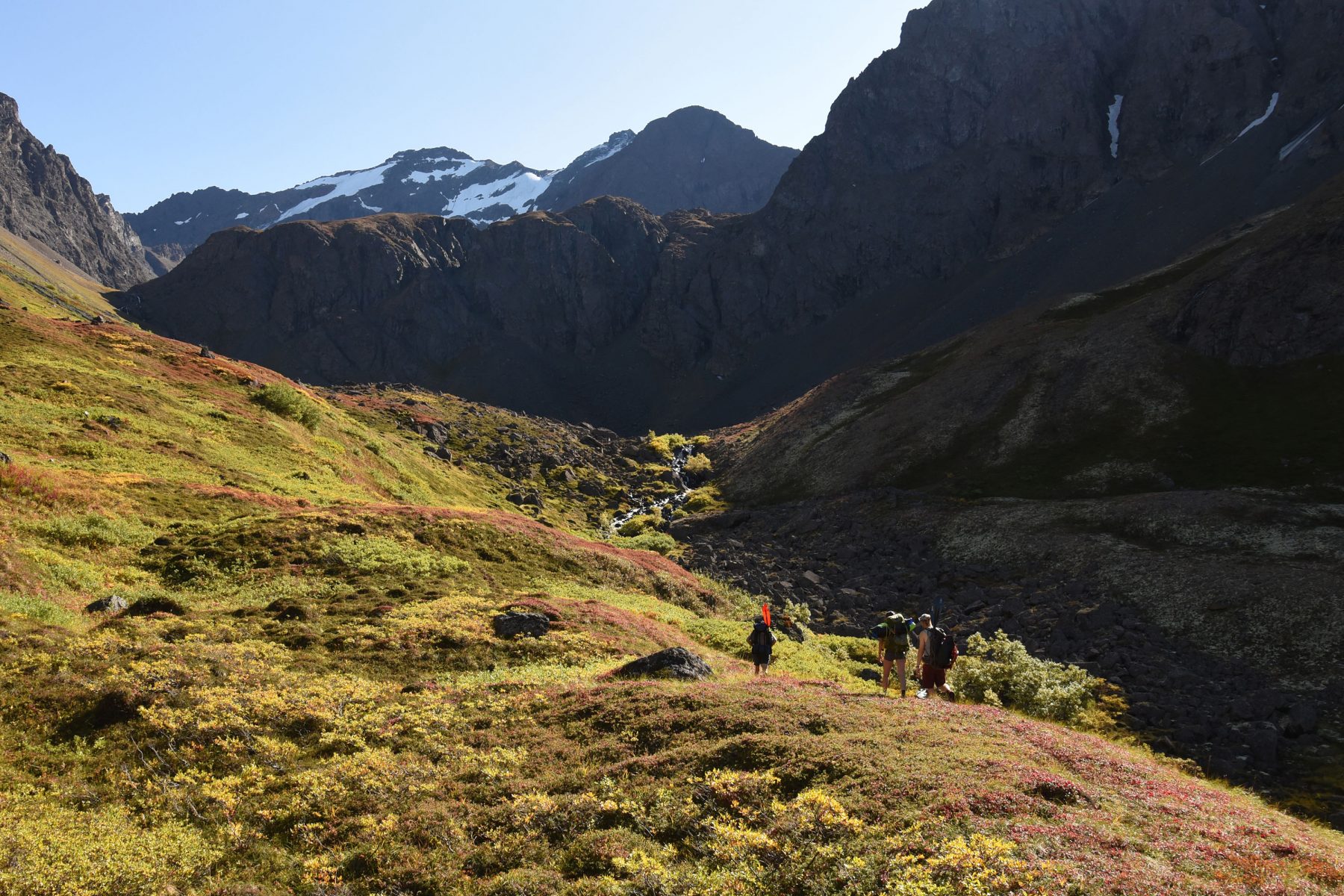 Fall colors in the tundra between Symphony Lake and Mirror Lake

Just before Mirror Lake, we sidehilled around a line of cliffs draped in waterfalls. 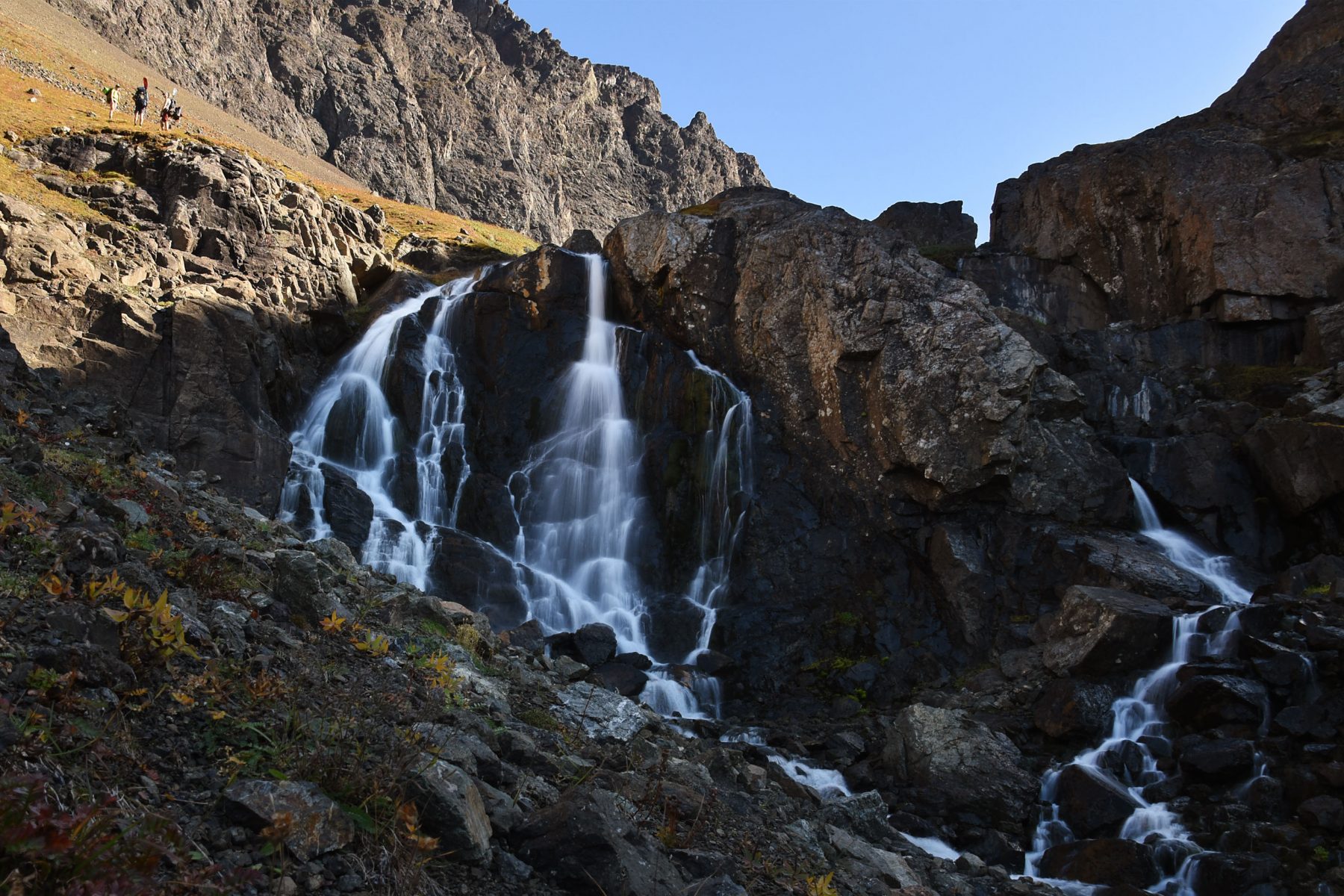 Above the waterfalls we reached the blue-green edge of Mirror Lake, nestled between Cantata Peak and the toe of a rock glacier below Calliope. By now the sun was as overhead as a September sun can be, and Greg, Ben, and Meghan stripped down to their “birthday drysuits” for the paddle across the lake. I took a few photos, peeled off my hiking gear and joined them. I don’t know whether we made the first float on Mirror Lake, but I bet we can claim the first naked crossing. 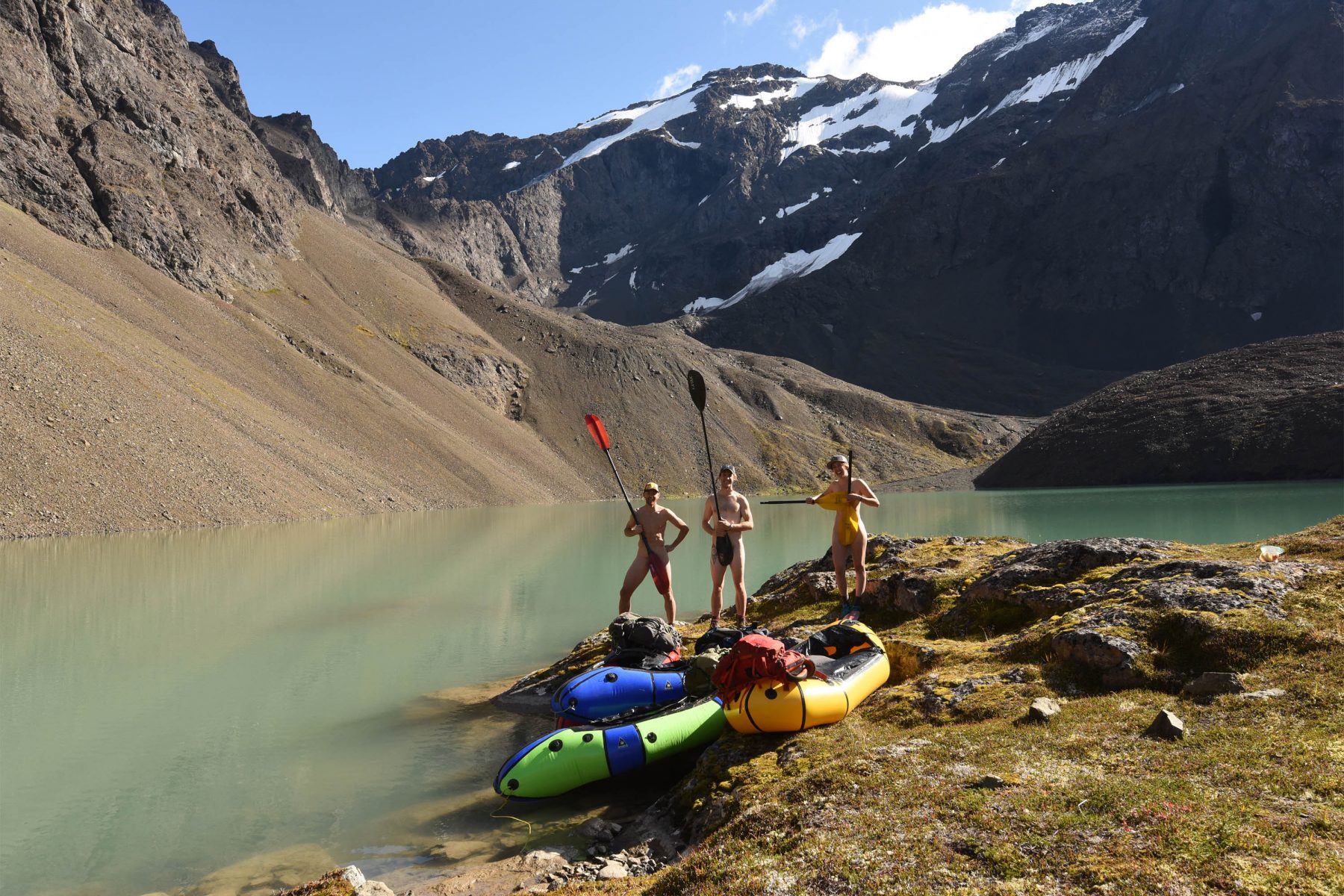 Into the high country

We pulled out at the far end of the lake next to the toe of the rock glacier and deflated our boats. Looming above us was the biggest unknown of the trip: a wall of craggy cliffs that pinched together right at the pass between Cantata and Calliope. For days I’d been studying the maps and looking at trip reports to see whether this pass would go. I hadn’t found any writeups, but the slope angle shading layer on CalTopo suggested that there was a narrow bench on the northwest corner of the pass that we could follow. It looked bad, though, and the rest of the group was understandably reluctant. I started to feel a little defensive, and insisted–and told myself–that I wouldn’t push it if it got sketchy. Everyone agreed to give it a shot, and we headed up.

We picked our way over loose moraines and past the terminus of a rock glacier clinging the northwest face of Calliope. As we approached the pass, the scree became steep and unstable. We fanned out, moving back and forth looking for productive footing. One step forward, one step forward, one step back… it was slow progress, but progress nonetheless. 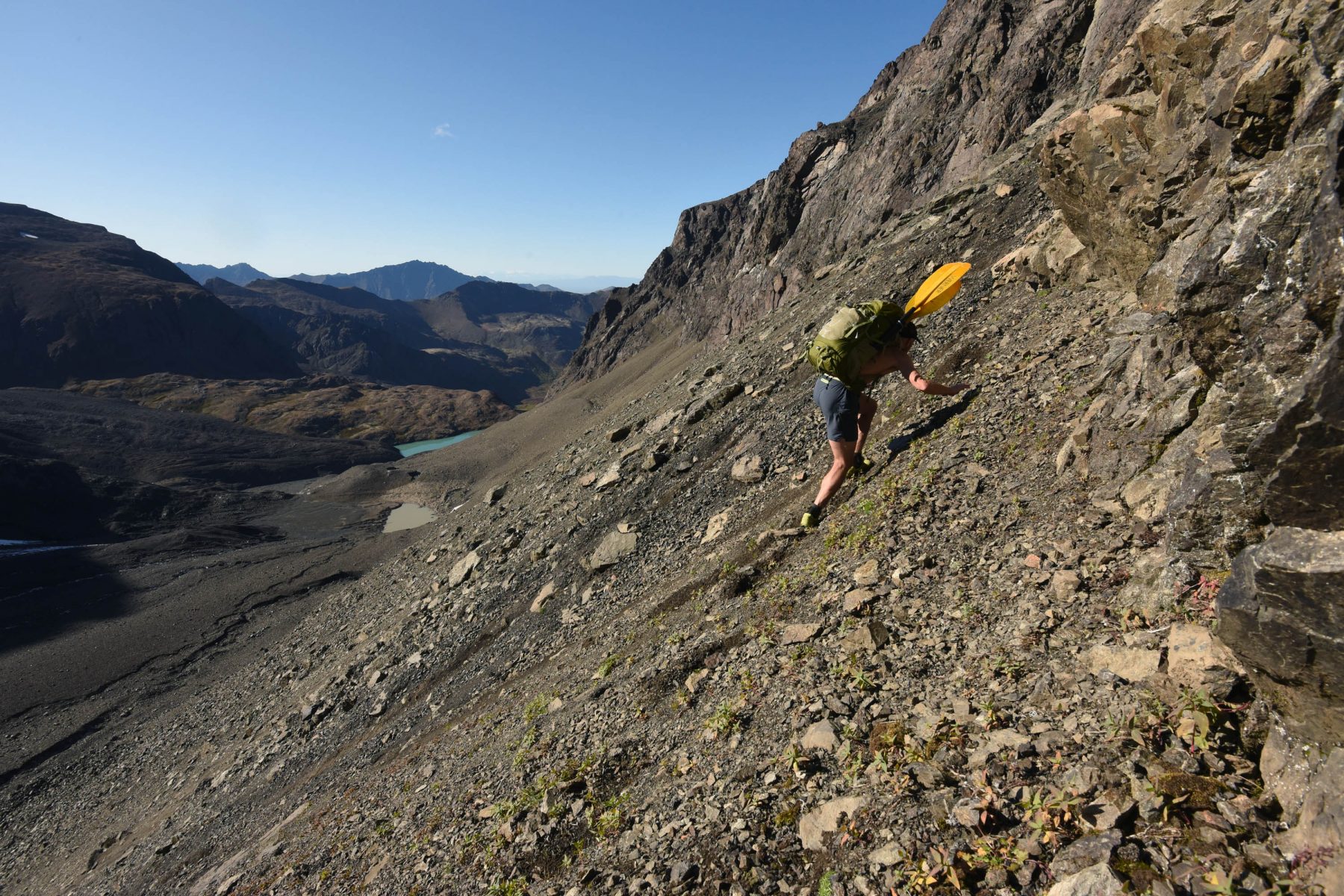 Greg Martin climbing toward the pass between Cantata and Calliope

Greg reached the chokepoint first, and to my relief he called down that it would work. What I had been thinking of as a “bench” was really more of a steep, dusty gully but we were able to climb it one-by-one without trouble. 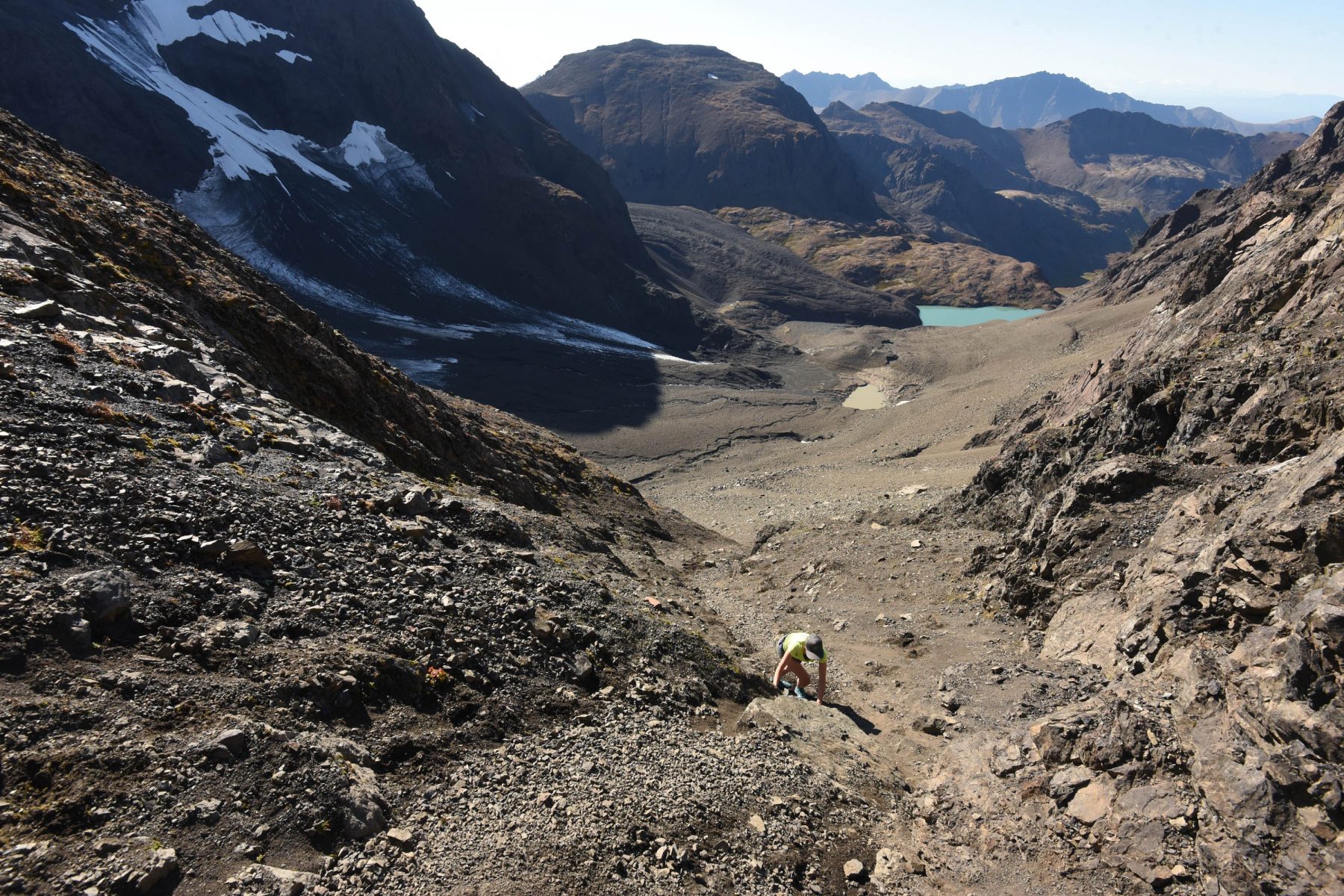 Just after 4pm we reached the 5,280-foot pass between Cantata and Calliope and dropped our packs. This pass was higher than many Chugach front range summits, and making it here with our paddling gear felt like an accomplishment in and of itself. 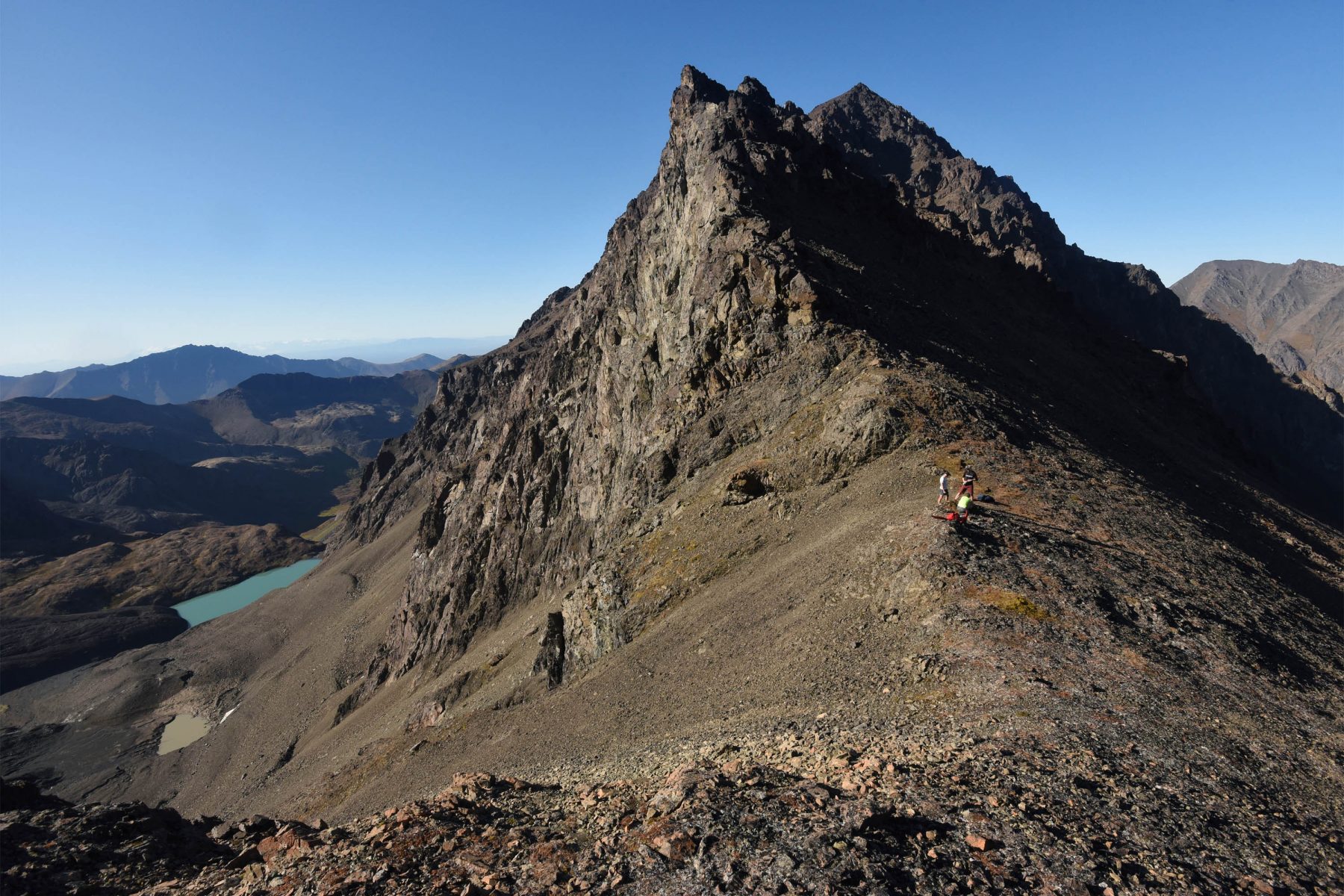 Taking a break in the 5,280-foot pass between Cantata and Calliope

Beyond the pass we dropped into a deep, U-shaped valley betweeen Cantata and the north ridge of Calliope. Recent glaciation here had littered the valley floor with loose, haphazard piles of scree. 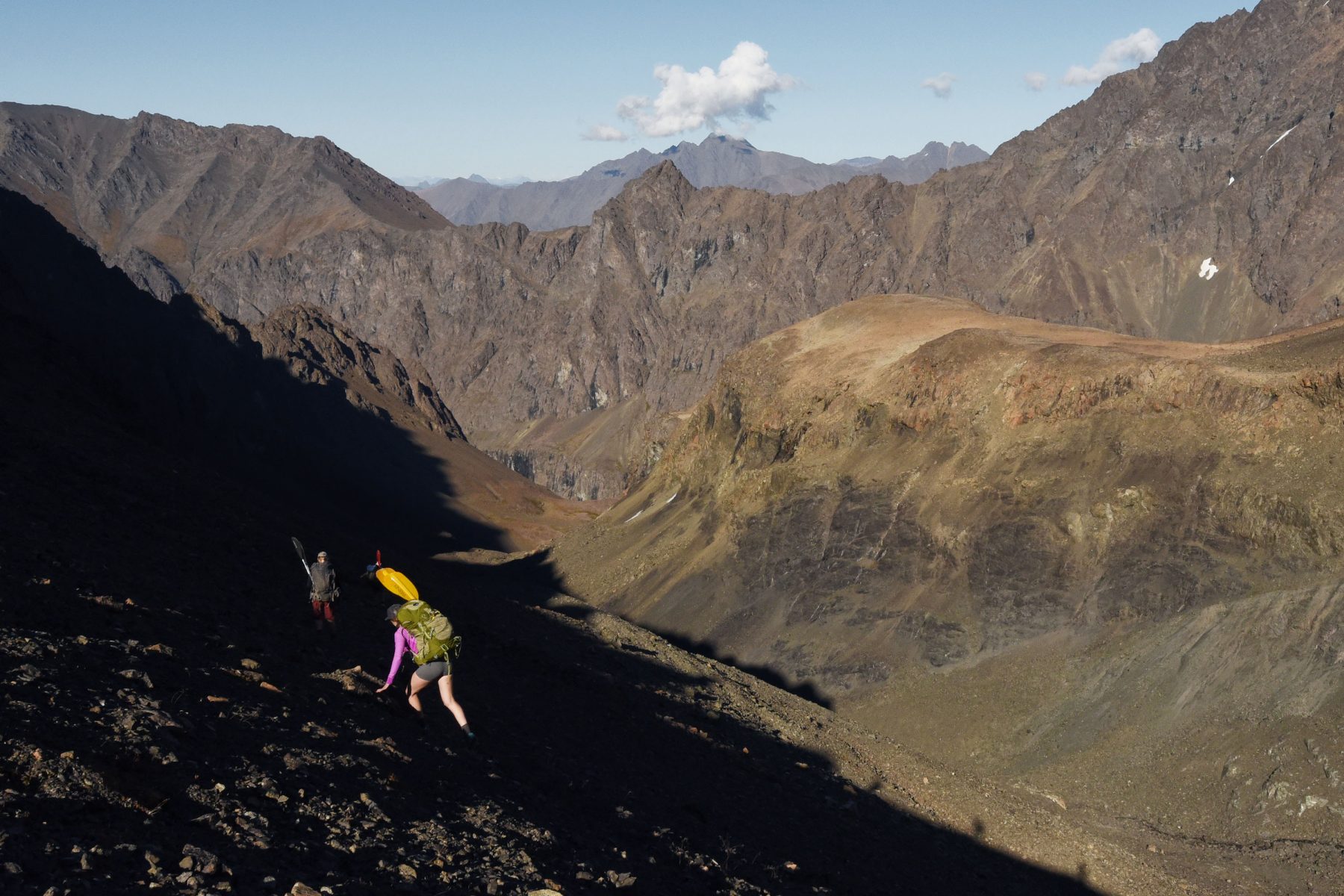 Descending from the pass between Cantata and Calliope toward Eagle Peak

As we reached the mouth of the valley the western faces of Eagle Peak came into view, lit up with warm early evening light. 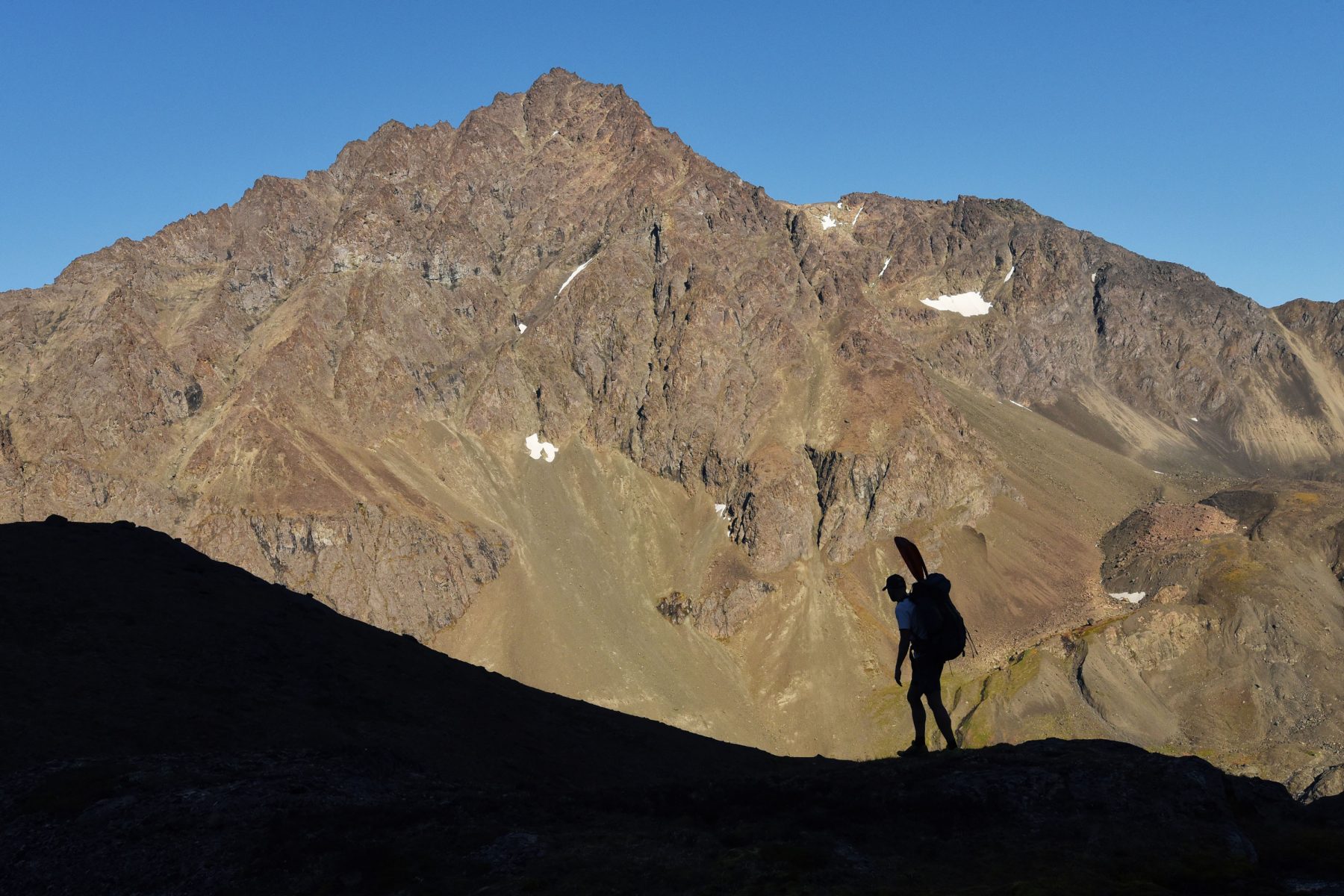 Meghan decided to take a break on by the creek between Eagle and Cantata, while Ben, Greg and I scrambled up glacier-polished bedrock to the toe of Flute Glacier. Of all the lakes on this trip, this is the one I was looking forward to paddling the most. This lake doesn’t have an established name. In fact, it’s only existed for about a decade and a half due to the rapid recession of Flute Glacier. 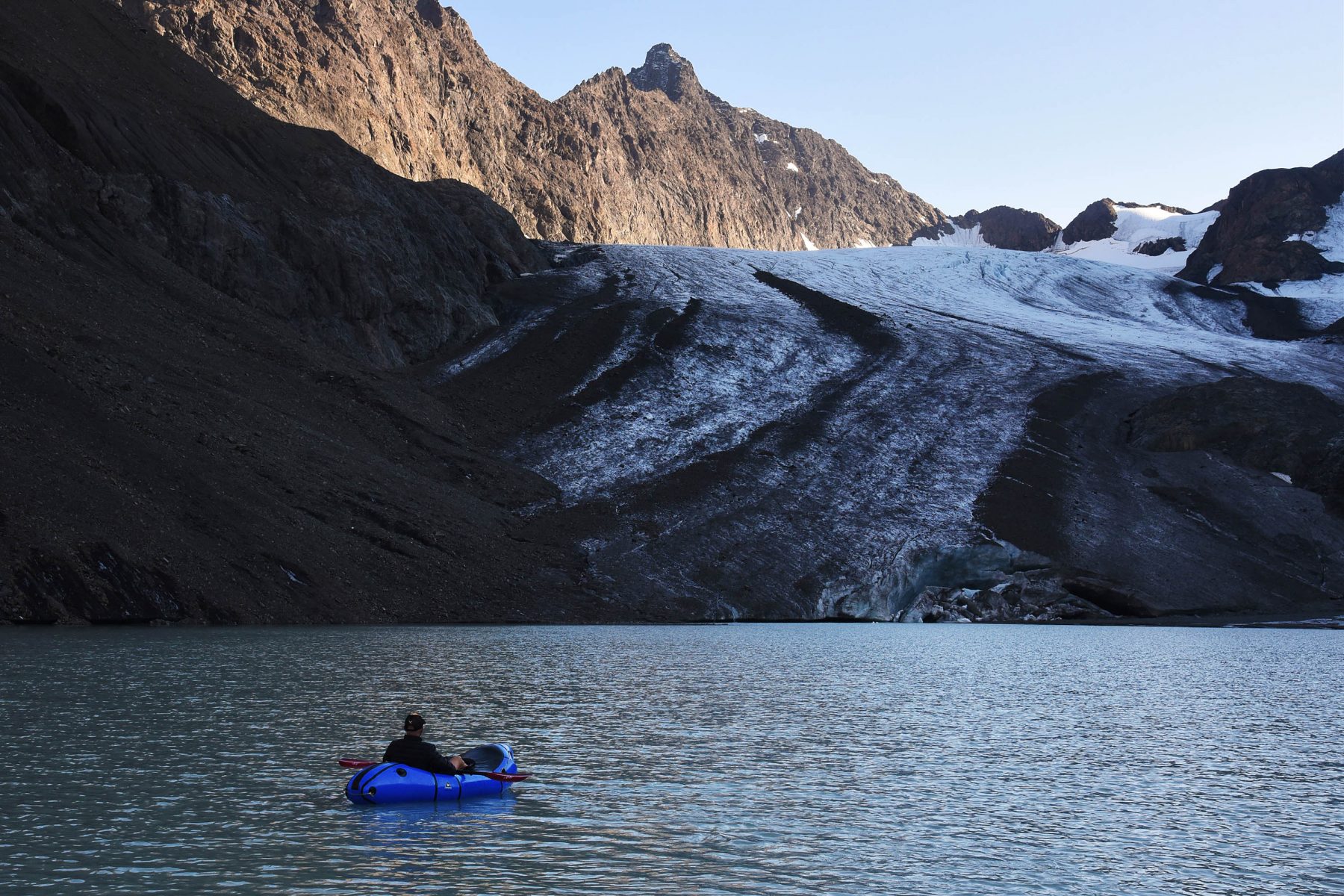 Greg Martin paddling an Alpacka Gnarwhal on the newly-formed lake below Flute Glacier. It’s likely that this is the first time this lake has been floated, but it’s nearly impossible to know for sure.

The ampitheater of craggy peaks around us glowed with sunlight, and above us the sky was a pale, almost tropical blue. We were at the toe of an alpine glacier, in Alaska, in September, still wearing shorts. All across Alaska, people were enjoying the beautiful weather. But the conditions today could also be seen in a darker light, as an especially alarming data point in the longer-term story of climate change in Alaska. In recent years, Alaska has warmed at a far faster rate than the global average. Alaska has experienced record-setting tundra fires, vanishing glaciers, eroding coastlines and ecological disruption on a wide scale. Floating a lake so new that it hasn’t even made it onto the maps yet was exciting, but also alarming.

Three digital topo maps showing the toe of Flute Glacier, with the GPS track of our route overlaid. All three maps show us packrafting on the surface of the glacier, and none show the lake. Glacial recession in Alaska is so rapid that maps frequently struggle to catch up.

From the glacial lake we scrambled back down the middle of the valley, past the cascades below Eagle Peak. 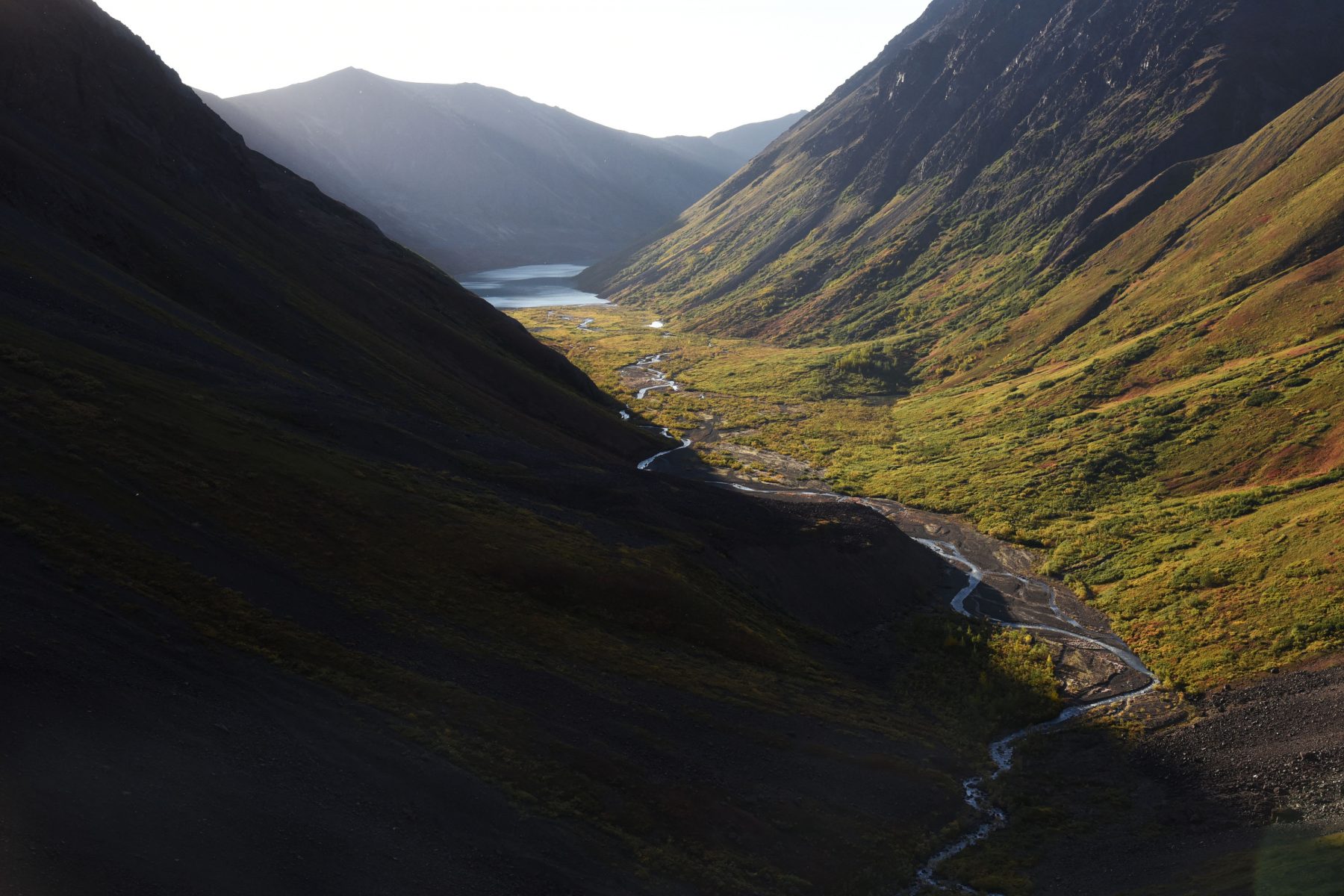 Looking down onto the drainage above Eagle Lake

By early evening we reached the flat floor of the valley above Eagle Lake. This is one of my favorite places in Chugach State Park. The gravel bars make for breezy walking between the towering walls of Eagle, Cantata, and Hurdygurdy. 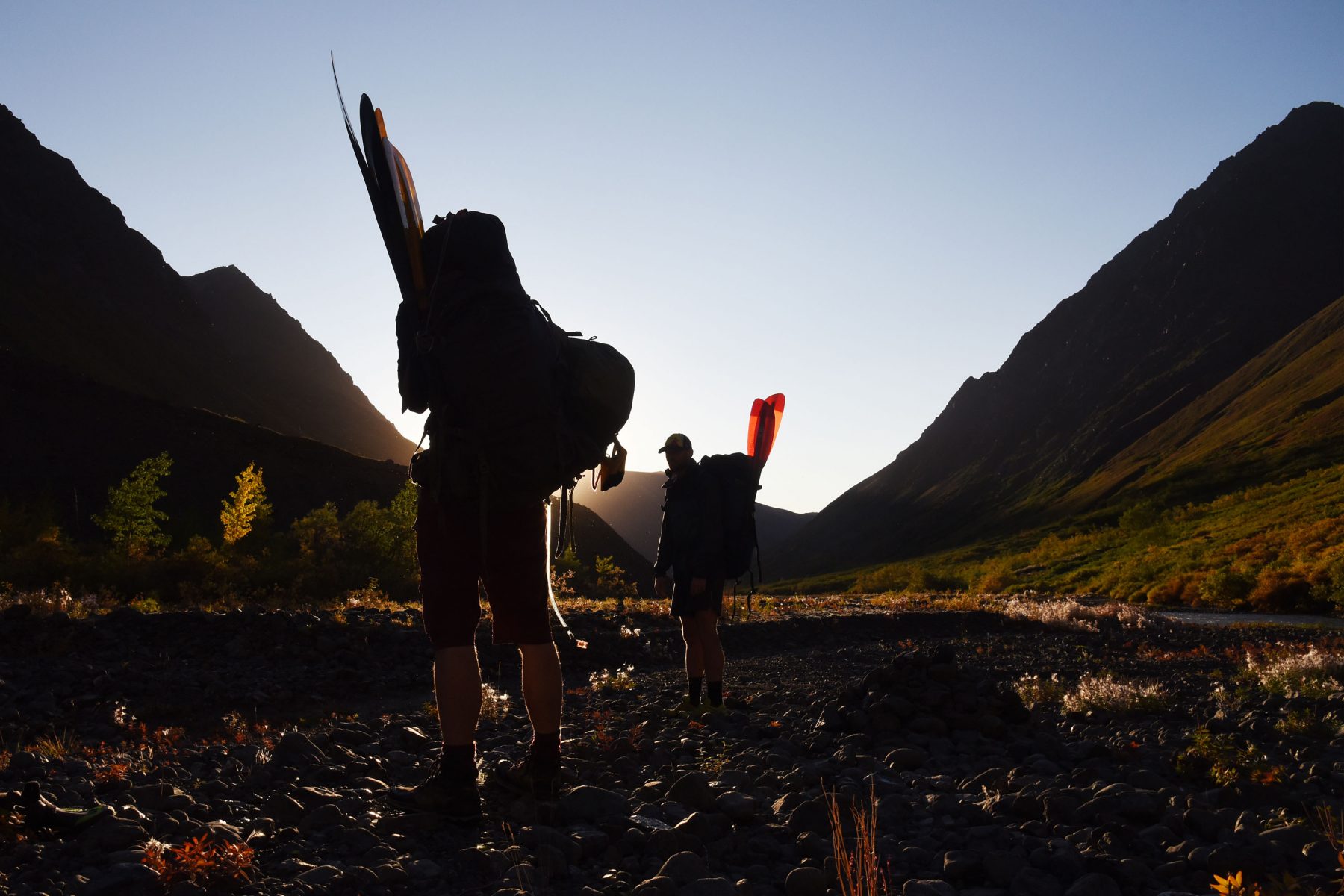 Just above Eagle Lake we decided to give the creek a shot. We inflated our boats and headed down the shallow waterway, half paddling and half butt-sliding over sandbars. 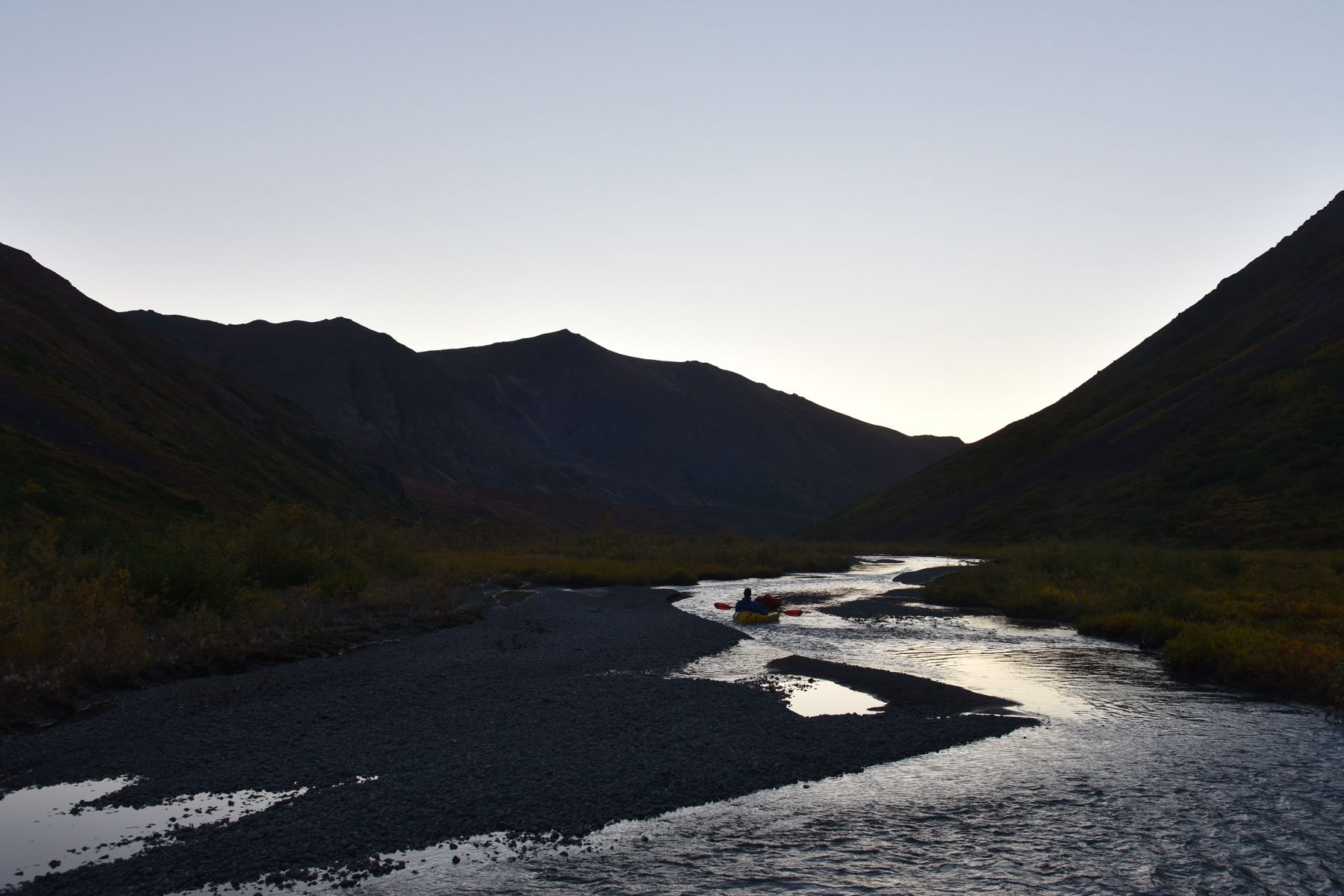 Attempting to paddle the creek leading into Eagle Lake

Eventually we gave up and dragged our boats the last couple hundred feet to the edge of Eagle Lake. 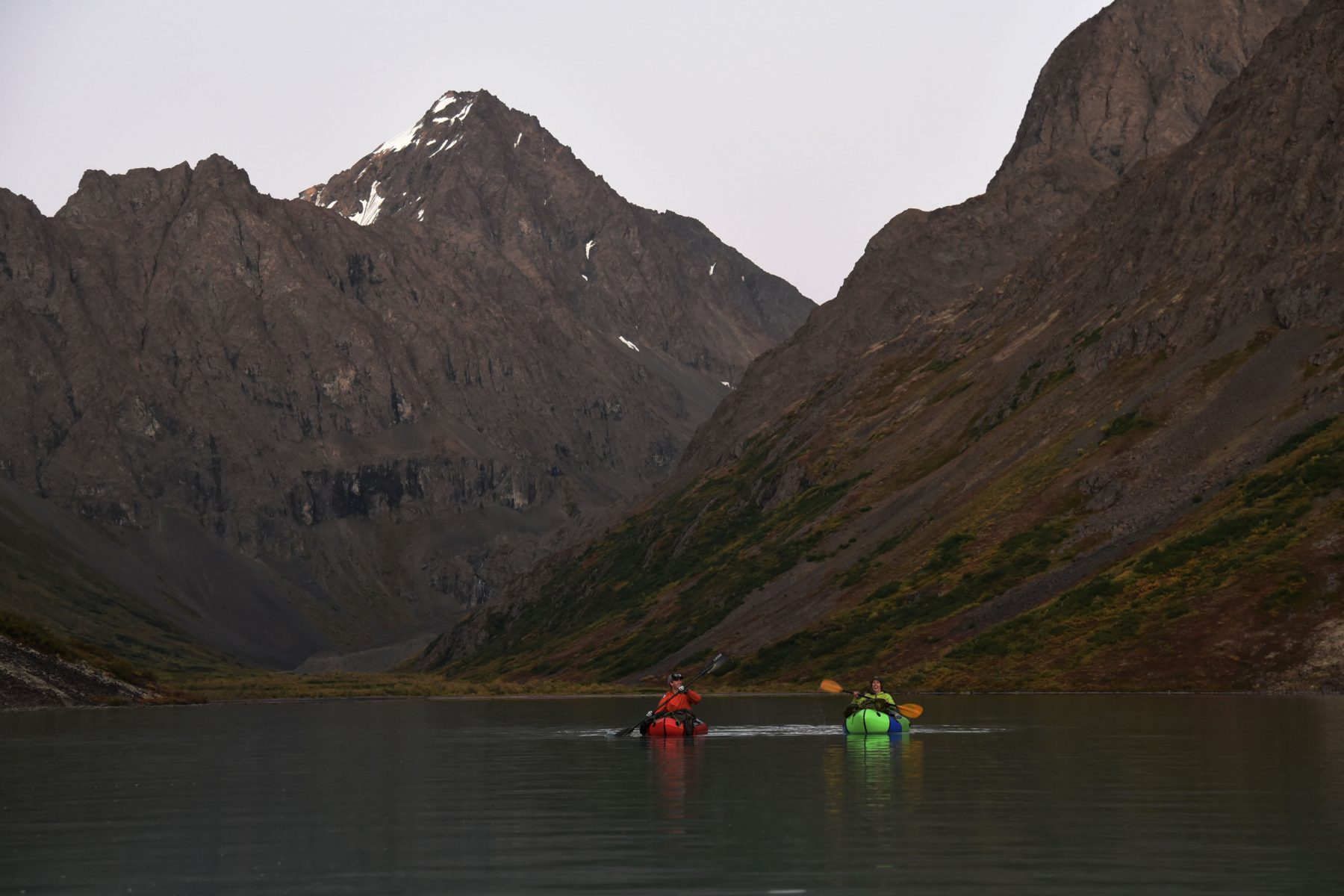 Ben Sullender and Meghan McClelland paddling across Eagle Lake, with Eagle Peak in the background

Eagle Lake at sunset was sublime, but by now we were eager to make it home. 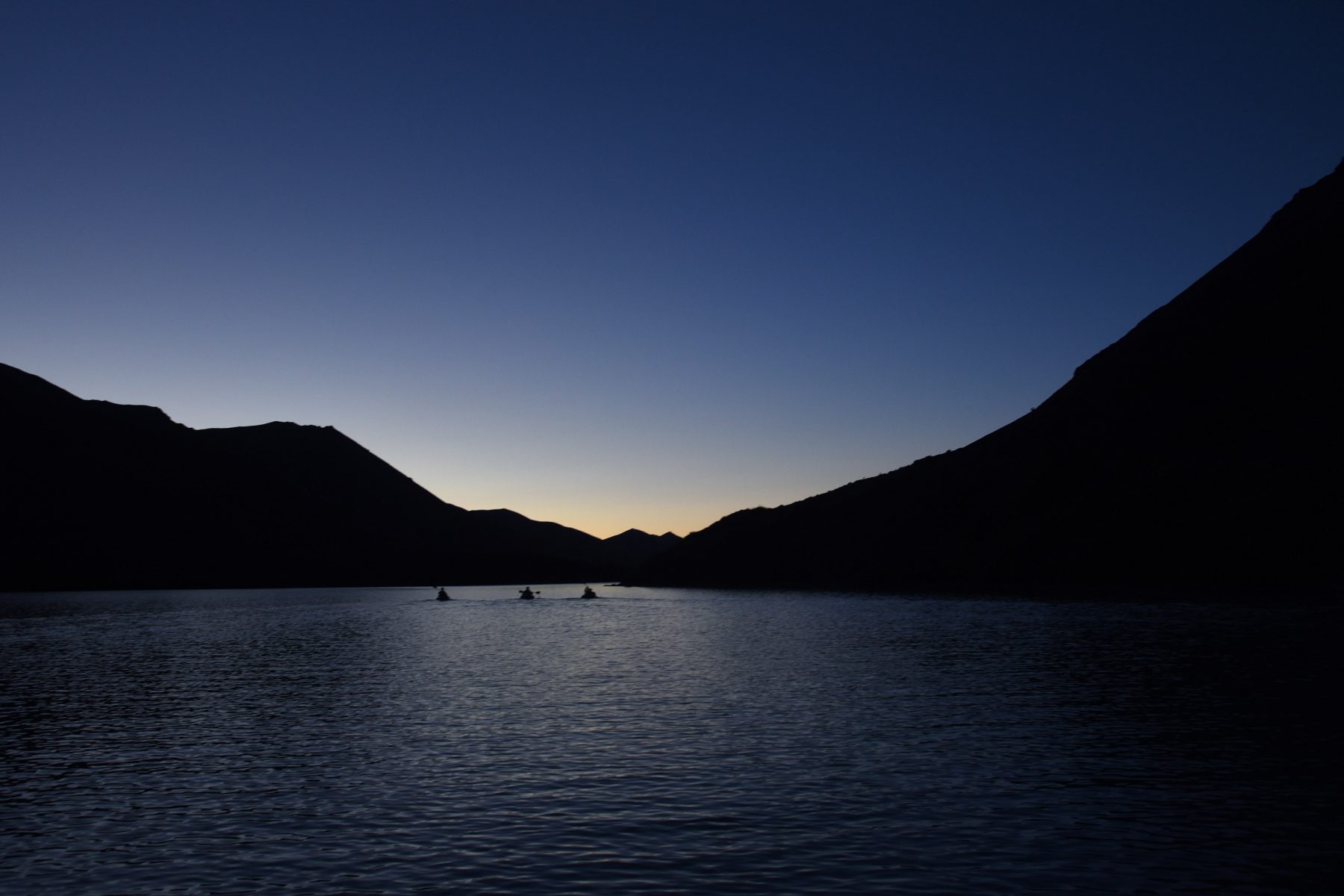 As soon as the sun dipped behind the mountains the impending winter reasserted itself, and temperatures quickly dipped. We packed our boats for the last time today with cold, wet fingers, pulled on fleece jackets, and fished headlamps from the bottom of our packs.

We tromped back to the parking lot in the dark, tired but not so tired that we couldn’t admire the immense splash of stars overhead. 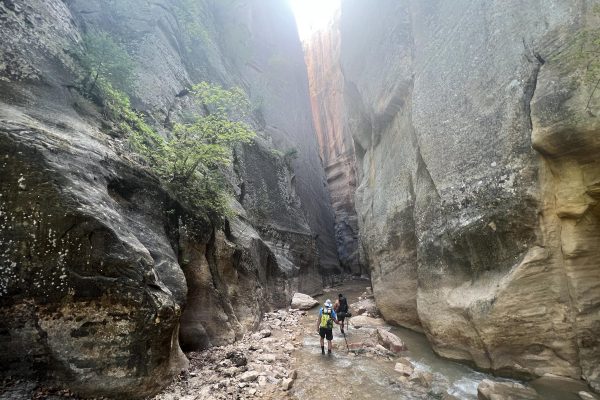 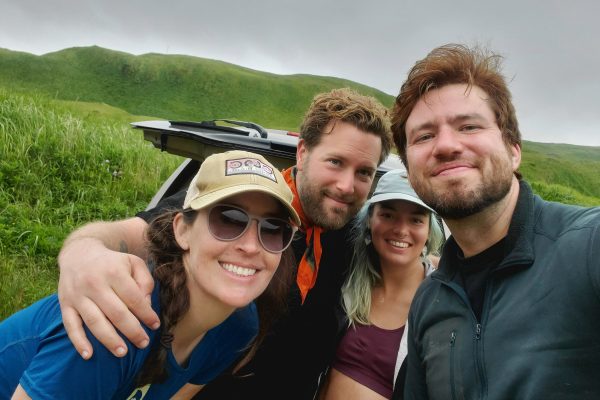 Just stumbled onto your website while researching some Thunder Gorge and Upper Eagle River info. I’ve only read this one write up so far and I am already a fan. What a great site you have here. Thanks for being so open with your write ups and info about your trips. You are a great ambassador to the outdoors of Alaska. I live just before the Nature Center and spend as much time in the mountains/outdoors as possible. Keep my email handy and if you ever find yourself needing any sort of help or info with any trips up the… Read more »