25.3-mile variation on the Bomber Traverse backpacking route, in the Talkeetna Mountains of Alaska

In early August I found myself at the Snowbird Glacier Hut, poring over the Bomber Traverse Map with three Canadian women who had just made it to the hut in the middle of a storm. Wind shook the hut and rain pelted the windows so hard it looked like we were in a car wash.

“What’s your favorite place back here?” one of them asked. I thought for a few seconds, and sheepishly gestured at some lakes around one of the huts. The truth was that even after years tromping in the Talkeetnas, I’d almost never left the comfort and safety of the hut system. But the more I looked at the map the more I realized there is a lot of terrain back here, and a lot of it sits right at tundra line. The huts are cozy and social, but they can also be a logistical crutch. Surely there must be some amazing trips lurking just beyond the edges of the hut system.

In late August, Tony Lewkowski and I hatched a plan for a three-day, two-night traverse across the Talkeetna Mountains. We would spend our first night at the Snowbird Glacier Hut. But instead of heading to the Bomber Hut on the second day we’d peel off the opposite direction and traverse into the Hobbit Creek drainage, climb over one of several high passes into the upper Peters Creek drainage, thread passes to the Black Prospect mine site, and eventually walk out to the Hatcher Pass road and thumb a ride back to our car. The meat of this traverse would be the seldom-traveled (but remarkably accessible) tundra wilderness between the Snowbird Hut and Black Prospect mine site. And so the Blackbird was hatched. I pushed Tony to take off work early on Friday. He did, and of course I ended up being late. But we did eventually make it to the Reed Lakes trailhead right around 5pm, and parked in the boulder-strewn badland that passes for a parking lot. Not far from the trailhead, we pulled on rain gear. 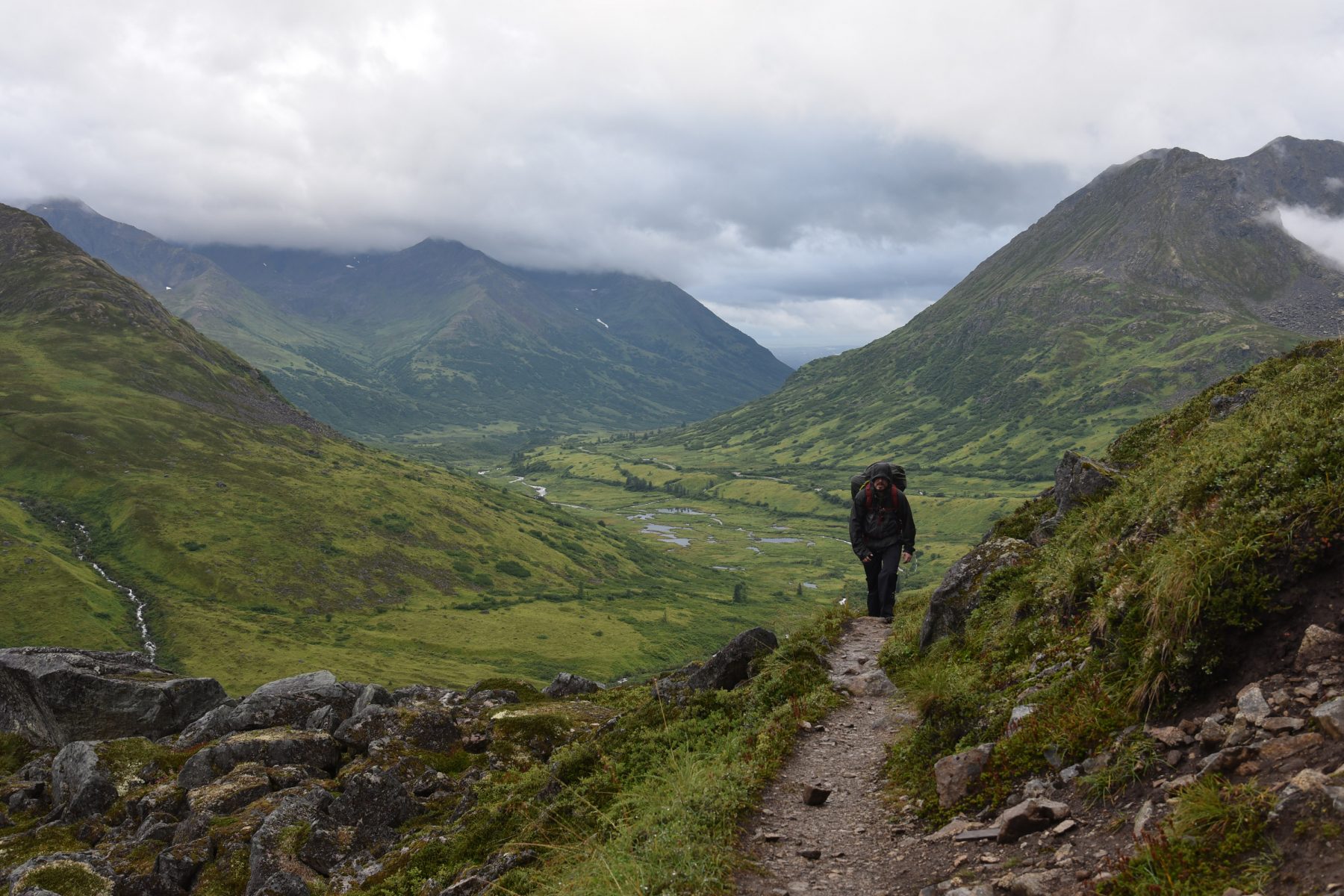 Luckily the cloud ceiling rose as we climbed. A drizzle isn’t such a big deal, but low visibility on a backcountry route (even a familiar one) can be frustrating. 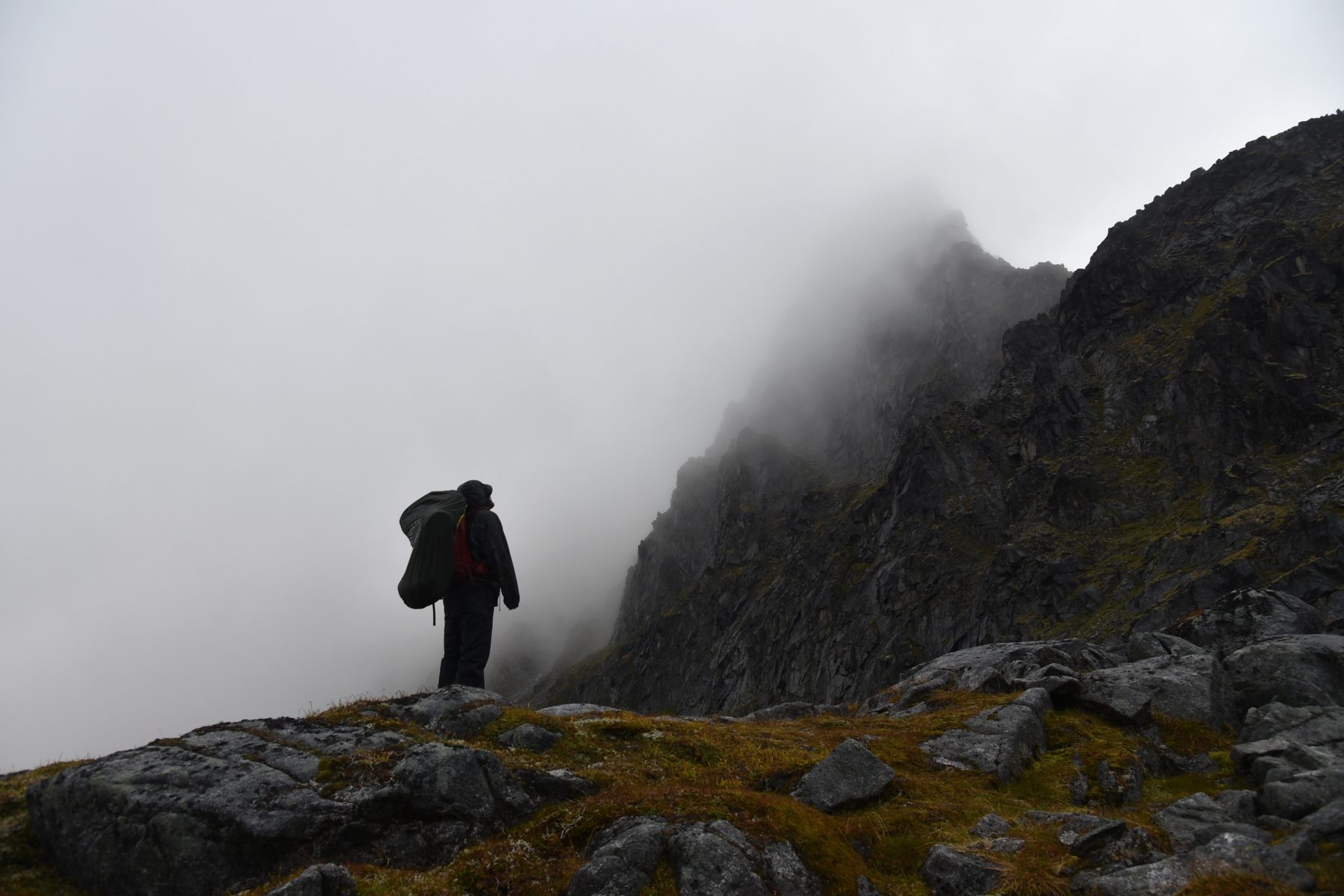 We made good time to the pass, and I was relieved to find that we had good visibility and plenty of light for the glacier crossing. I’ve crossed the glacier several times in whiteout or dark (and once, both) and don’t recommend it. The surface hazards on Snowbird Glacier are easily avoided–but only if you can see them. In bad conditions it’s easy to become disoriented and you can’t see moulins until you’re right on top of them. 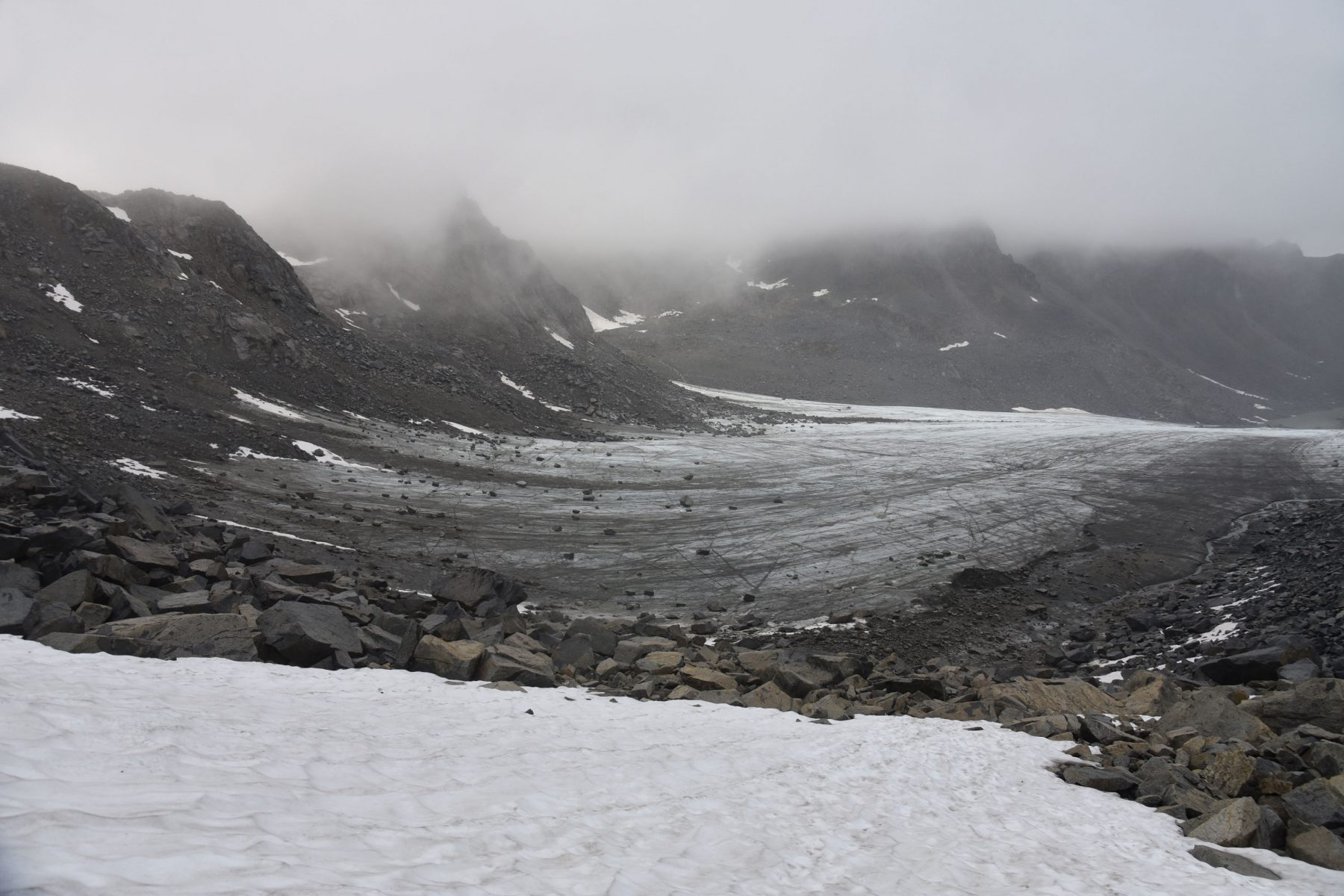 In good weather the walk across Snowbird Glacier is a scenic breeze, but tonight it felt hostile and alien. There is almost no visible life here, for good reason. 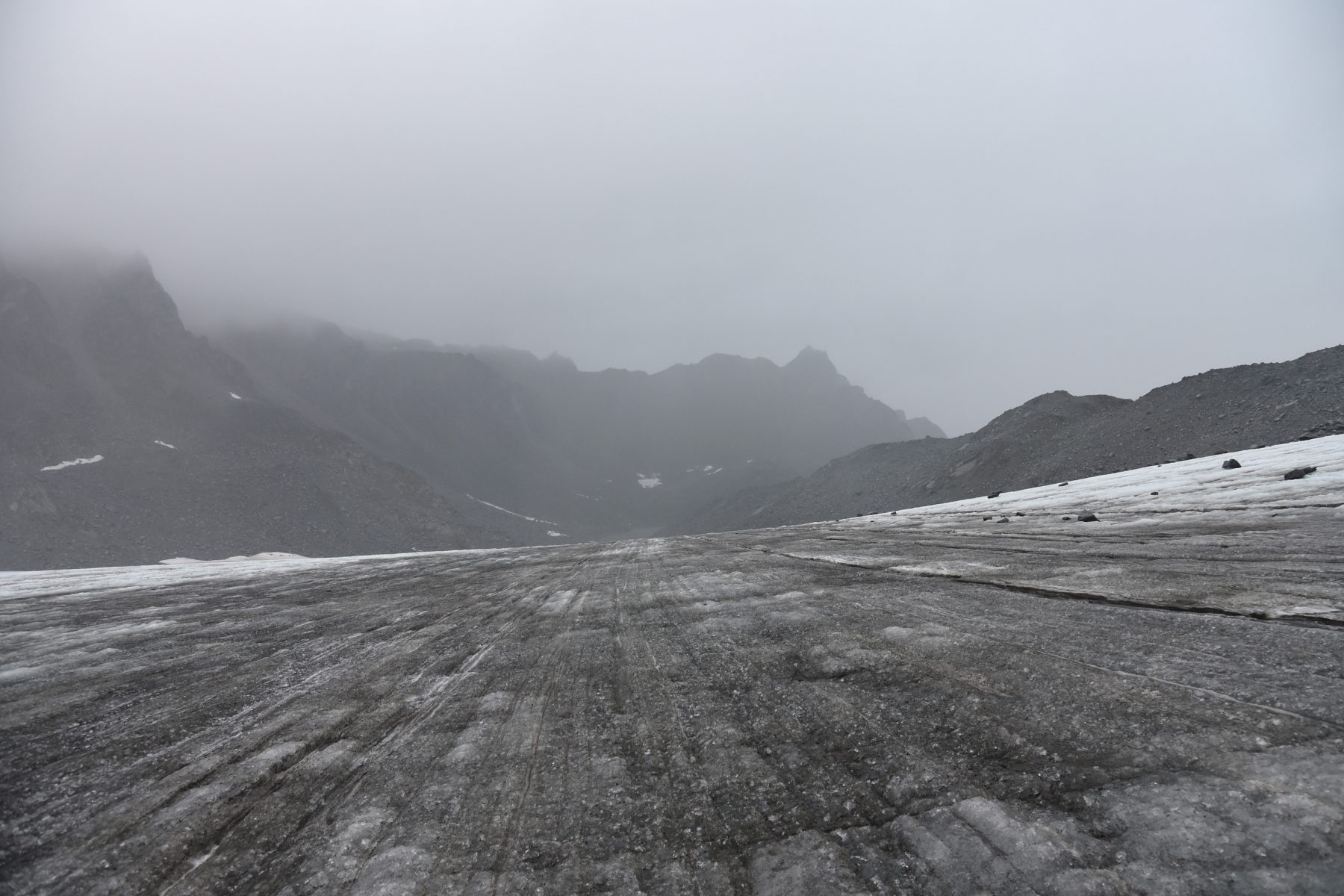 Walking across the surface of Snowbird Glacier

The forecast must have scared everyone else off, because we had the hut to ourselves. We peeled off wet clothing, made dinner, crawled into our sleeping bags and fell asleep to the sound of rain on the windows.

We woke to bluebird skies and peaks tipped with warm sunrise light. 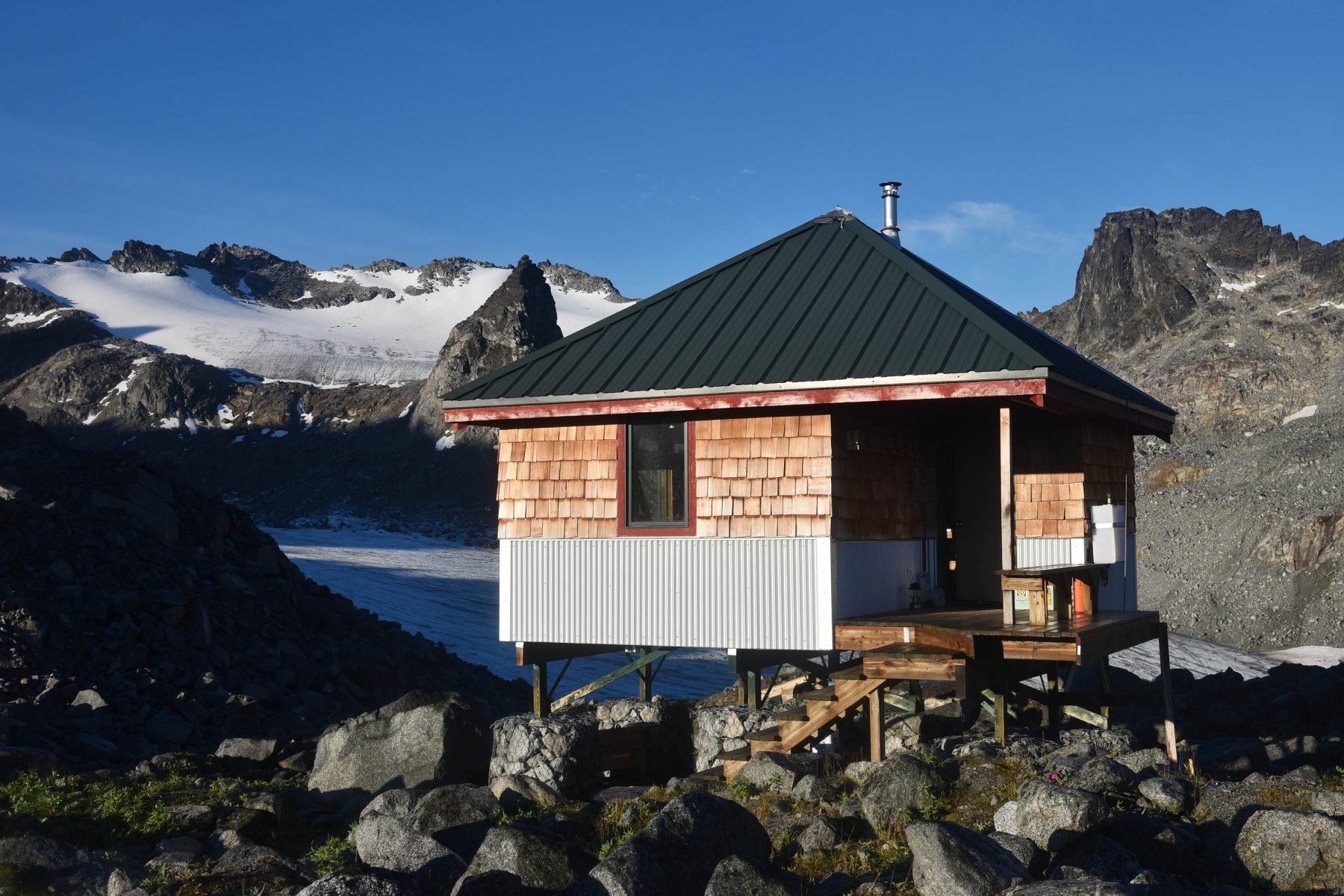 After a quick breakfast we packed, cleaned the hut and headed out into the sunshine. We scrambled down the moraine past the waterfall, and crossed Snowbird Creek where it fans out and enters Snowbird Lake.

We stopped on a tundra knoll below the lake to scout out our first move. Below us, the familiar Bomber Traverse route continued down into the head of the Bartholf Creek drainage before wrapping around the mountains toward the Bomber Hut. But that wasn’t our destination today. From here on out, both Tony and I would stomping out miles in new territory. 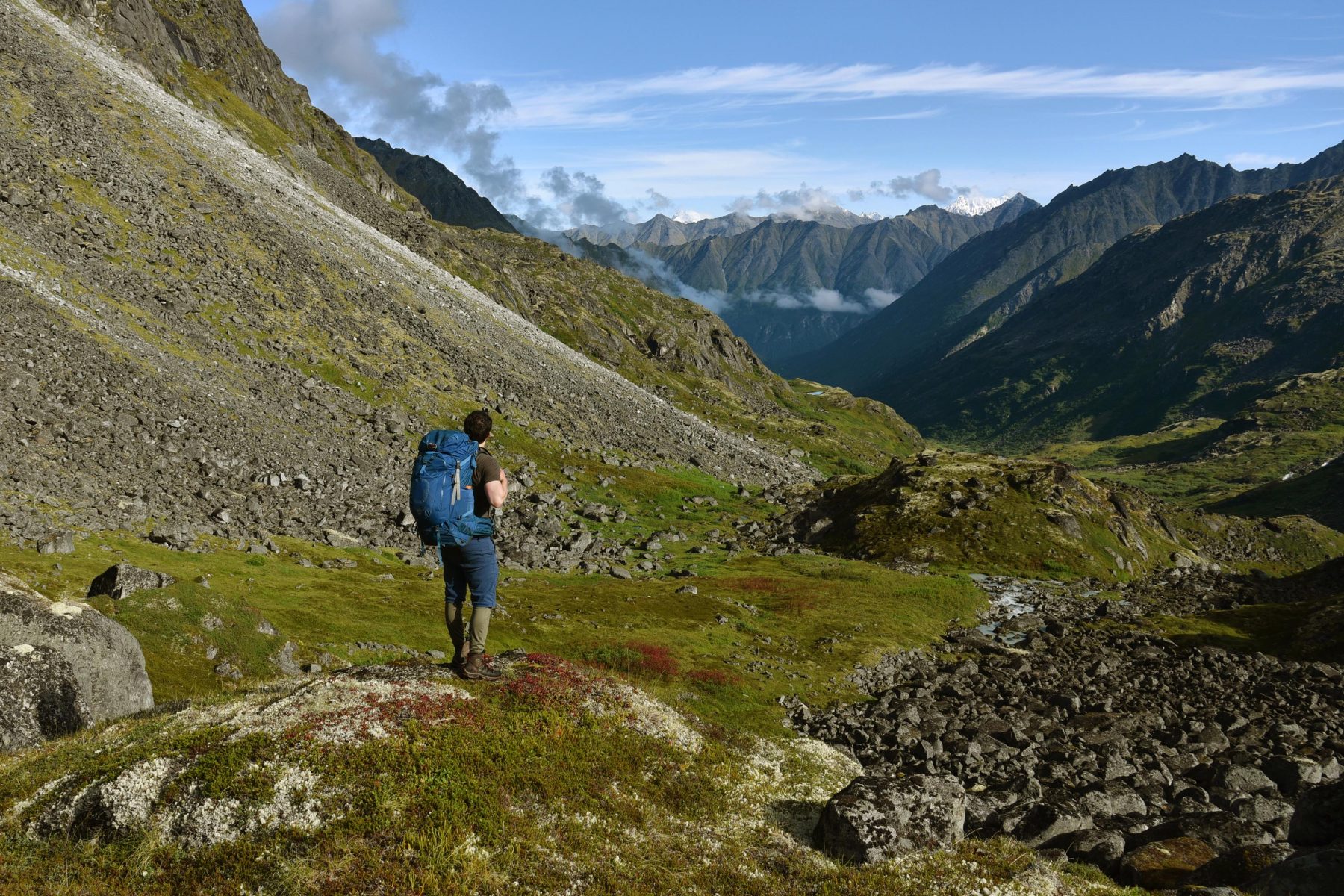 Scoping our route out of the Bartholf Creek drainage

We veered northwest onto a series of ledges that appeared to hug the 5200′ peak directly north of Snowbird Glacier. We didn’t know if this route would actually work–the Talkeetnas are riddled with granite cliffs and slabs, many of which are too small to show up on topo maps but too big to climb safely. But sure enough it went, and we soon found ourselves on a sprawling tundra bench covered in boulders, small lakes and splashes of red dogwood.

Panorama of the Talkeetna Mountains, including the Hobbit Creek (bottom left), Bartholf Creek (left), Wintergreen Creek (center), and East Fork Bartholf Creek (right) drainages. Snowbird Glacier is out of view to the right.

The view back toward Montana Peak was glorious. Far away we could see the the silver Bomber Hut, shining in the sun. 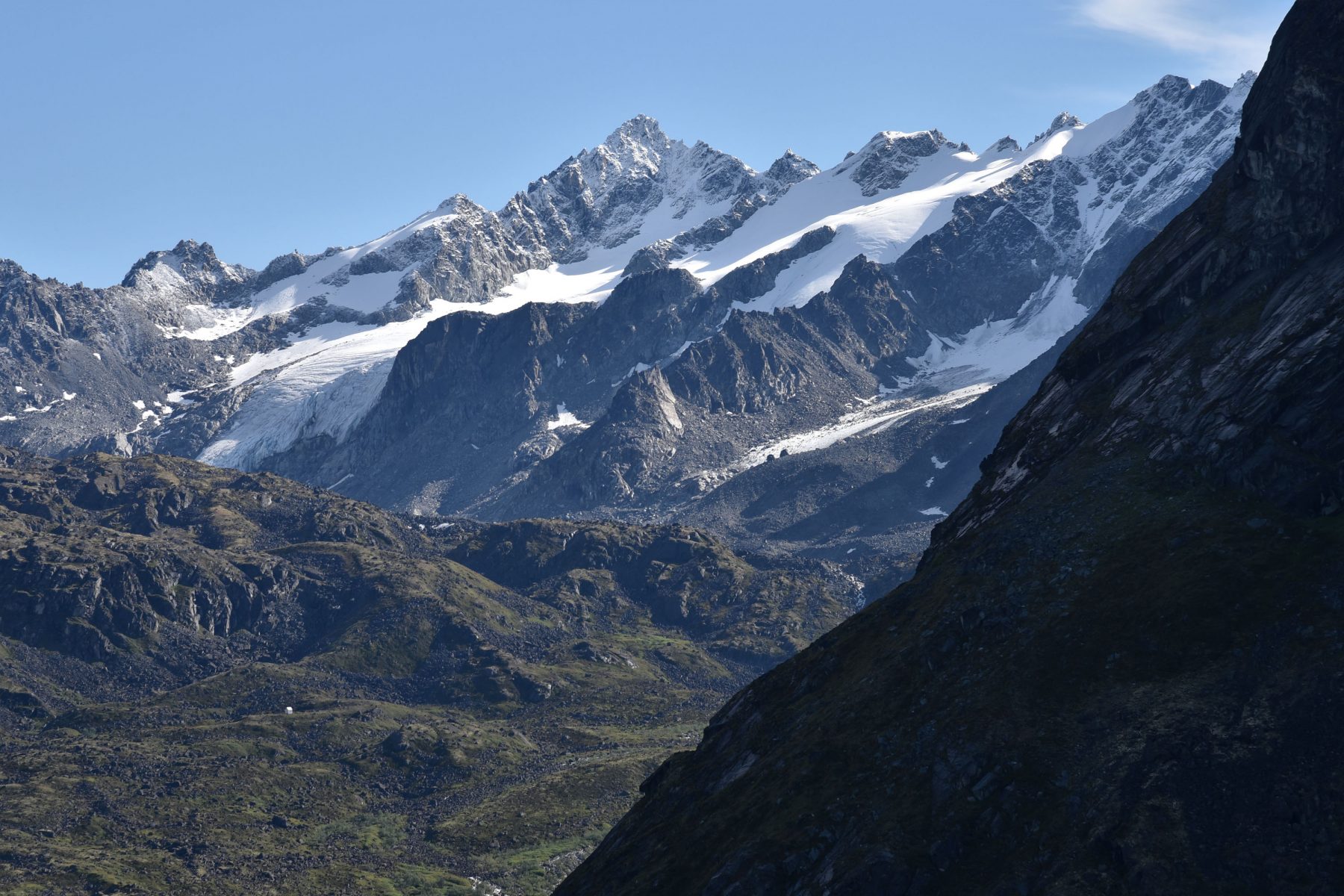 Montana Peak. The Bomber Hut is visible as a bright white point in the bottom left

We continued bench-hopping into the upper Hobbit Creek drainage, a cliff-walled tundra cirque strewn with rocks and blue tarns. From here we had our choice of several passes leading over the next ridgeline into the Peters Creek drainage. I had originally wanted to meander all the way to Gnome Lake, but we knew the weather was forecast to turn and a bank of clouds was already creeping up from the Bartholf. We opted for the nearest pass, a tundra ramp leading nearly to the top of a 5600′ peak. 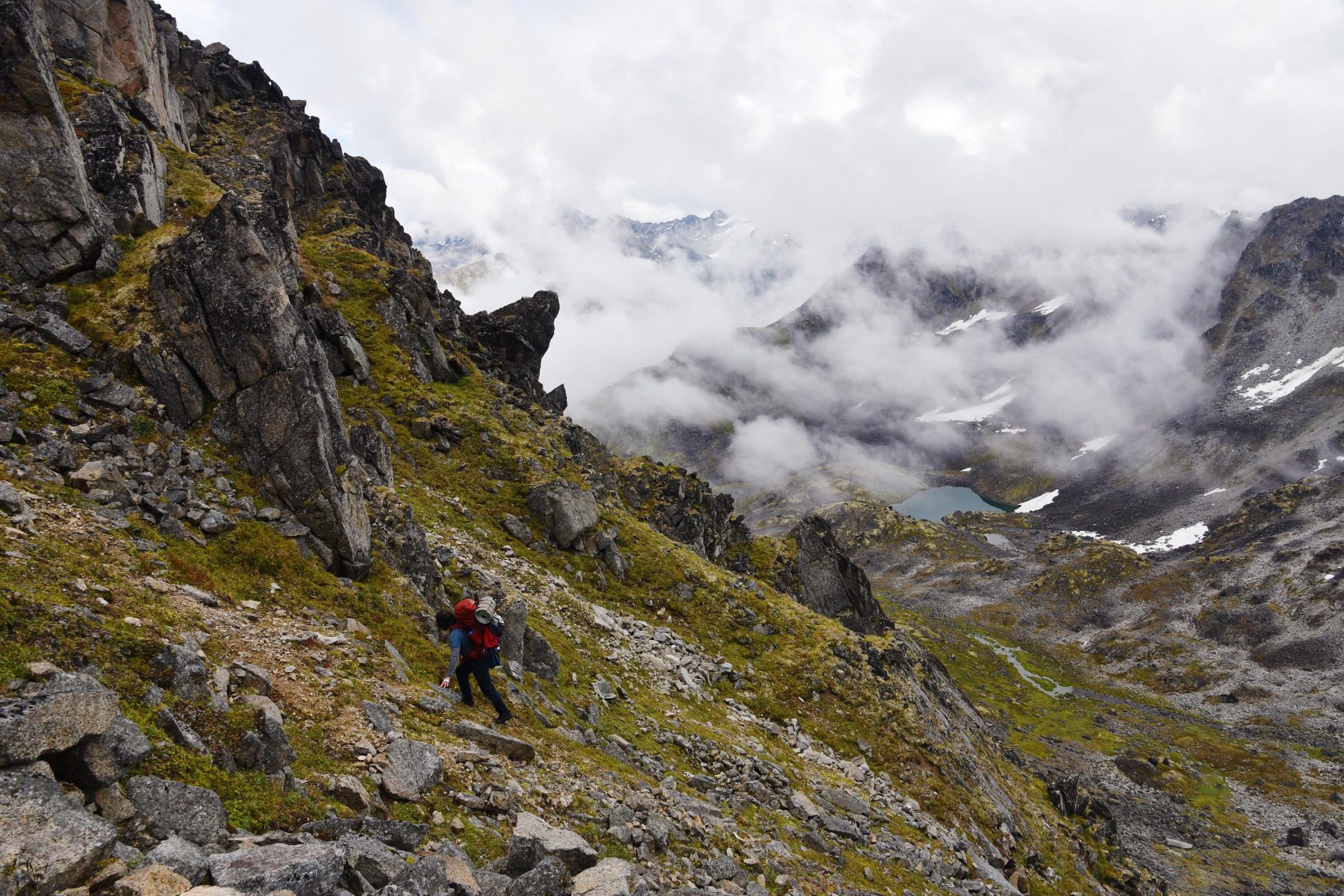 Tony climbing toward the pass

We were greeted at the pass by a wall of clouds streaming up vertically from the other side. 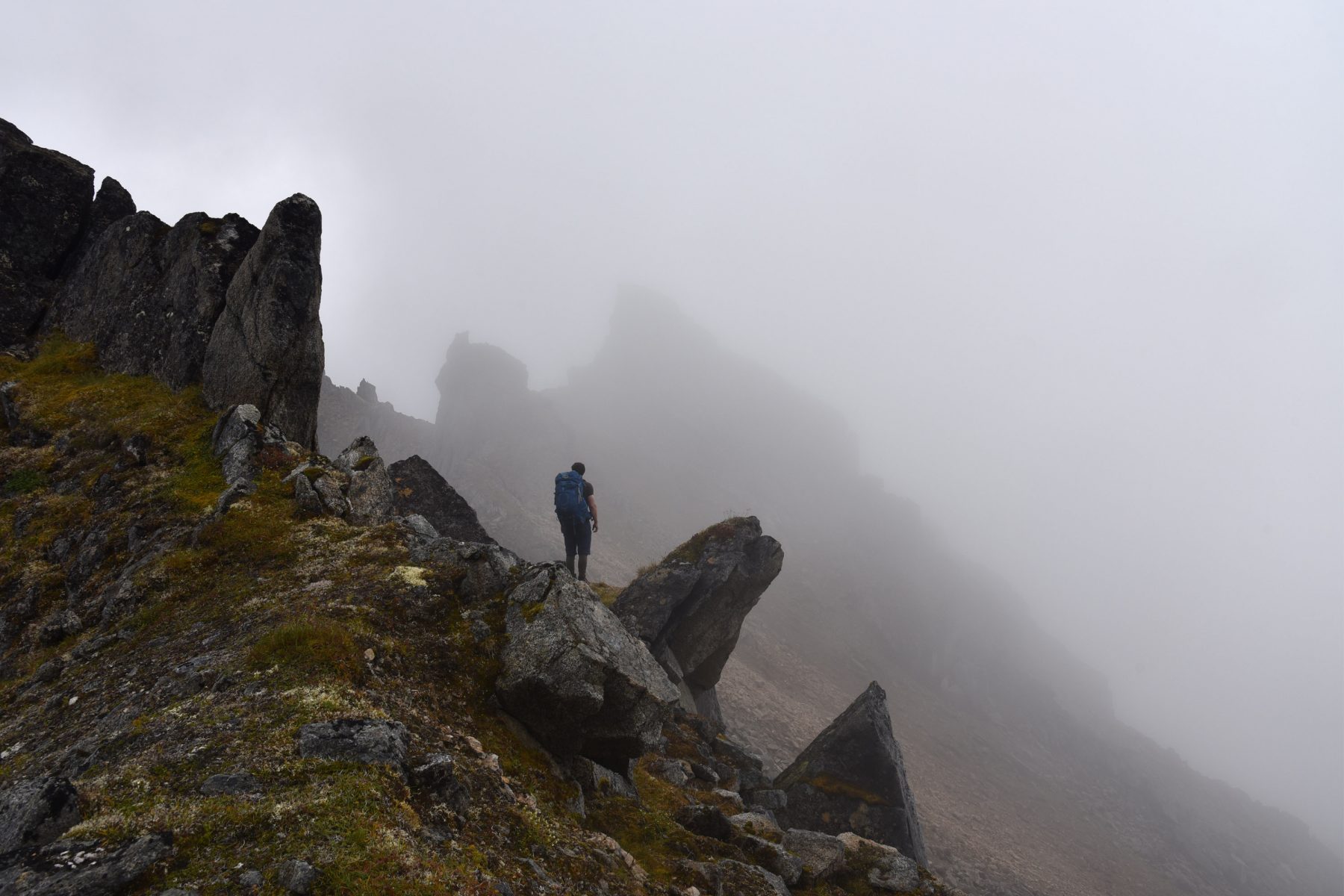 Our unnamed pass out of the Hobbit Creek drainage, just below the summit of Peak 5600

We scrambled down loose shale and down into the tundra of the upper Peters Creek drainage. The landscape below us appeared vast and primordial. Black and white faces of raw granite loomed above boulder fields laced with brilliant green moss and clear gurgling creeks. There were no leafy plants, no big animals in sight, and the only sound was our voices. I’ve heard the Talkeetnas described as “God’s Country,” and it is impossible not to appreciate this description, metaphorically or otherwise. High tundra in the Talkeetnas evokes a sense of the world in the slow process of creating itself. 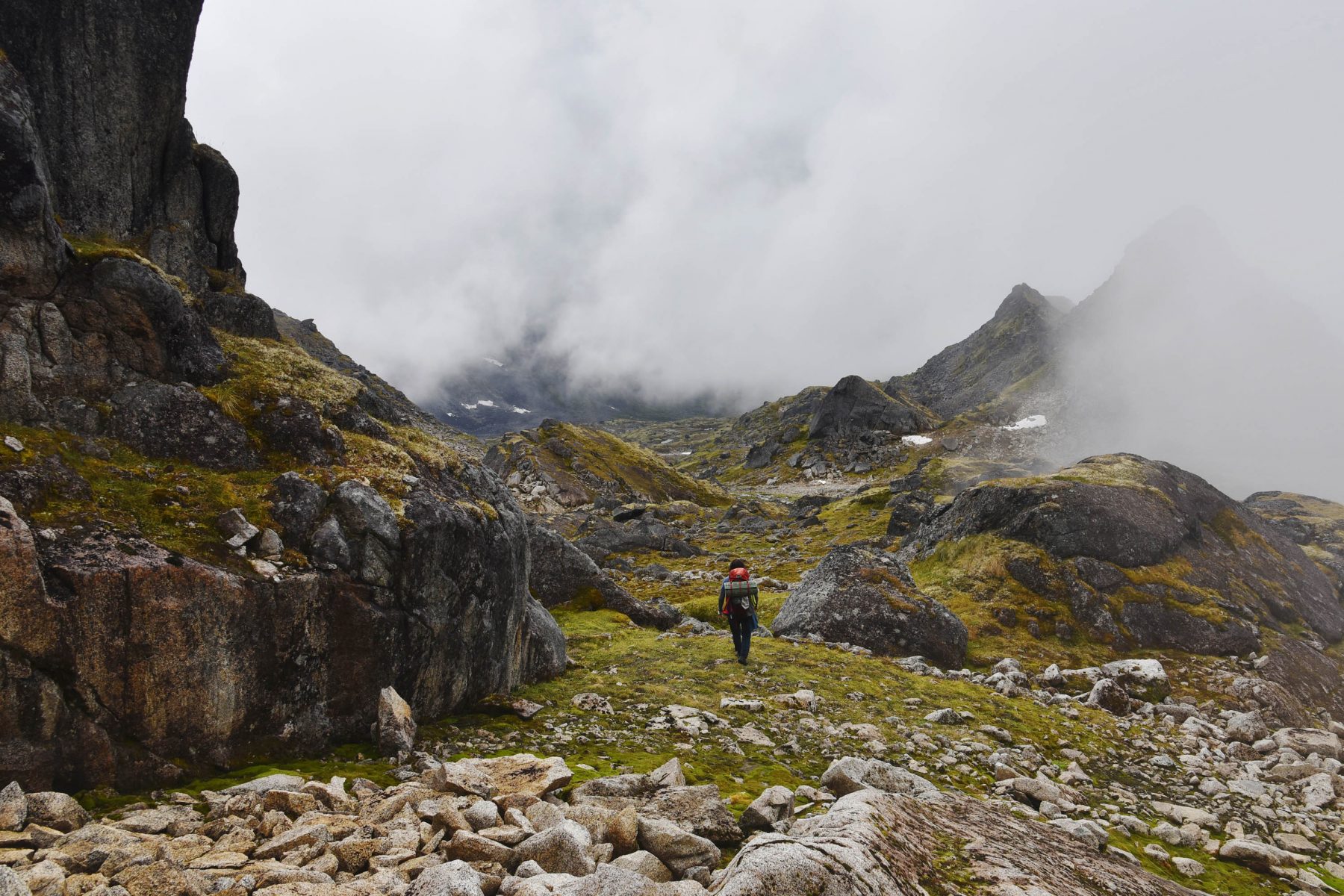 The clouds lifted to reveal Hatchethead Pass, which looked much farther away than it really was. Without familiar reference points like trees, judging distance here was difficult. 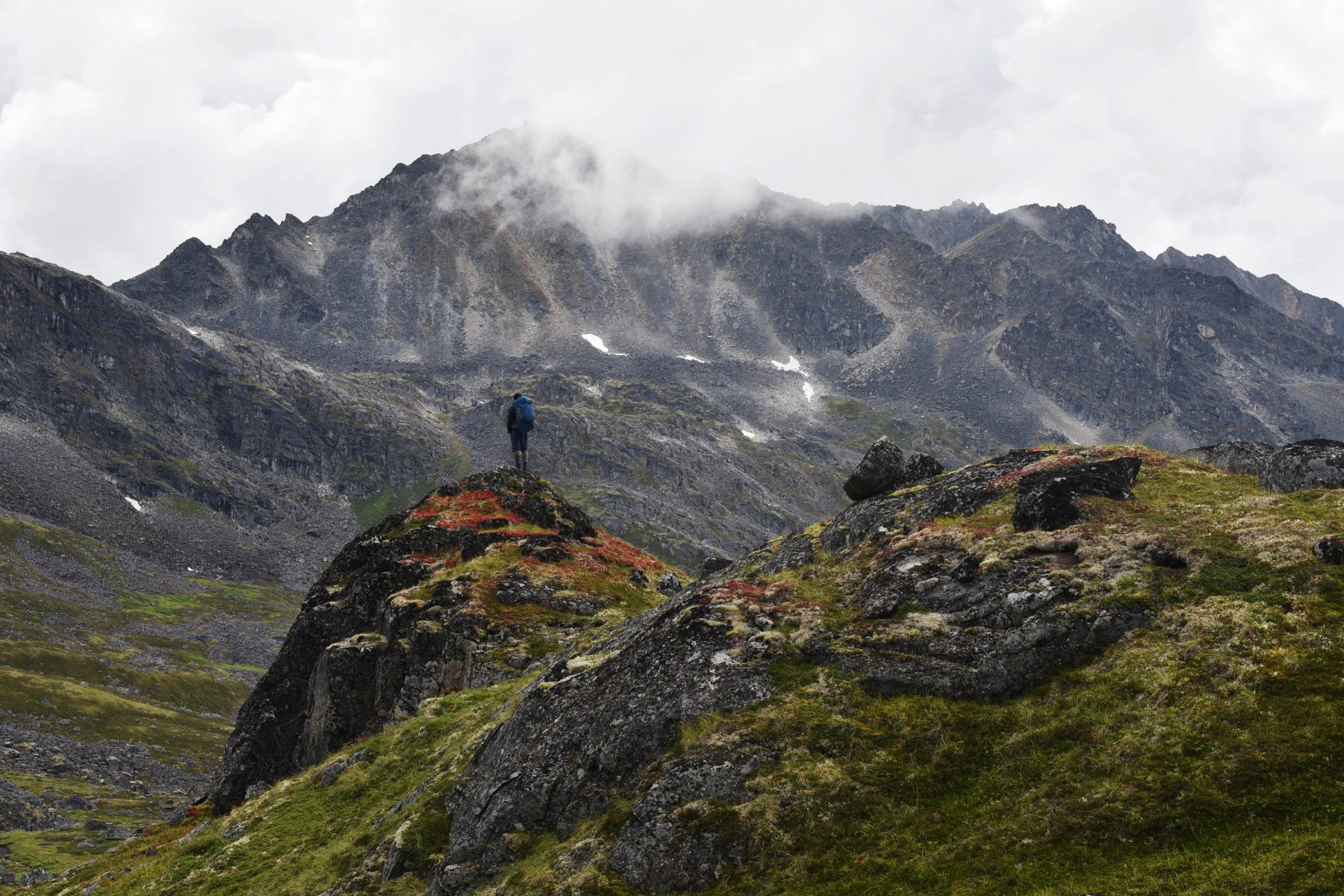 Standing on a knoll in the upper Peters Creek drainage, looking toward Hatchethead Pass (top left)

Suddenly Tony whispered loudly and ducked. Thinking he’d spotted a bear I reached for my spray, but when I looked up I saw the bright white rear end of a caribou flitting over a knoll before it disappeared downvalley. This was the first time I’d ever seen caribou in the Talkeetnas, and I hope it isn’t the last.

The clouds continued to churn and lift, and as we climbed toward Hatchethead we caught glimses of Saxifrage, Salix, and the many unnamed peaks in this corner of the Talkeetna Mountains. 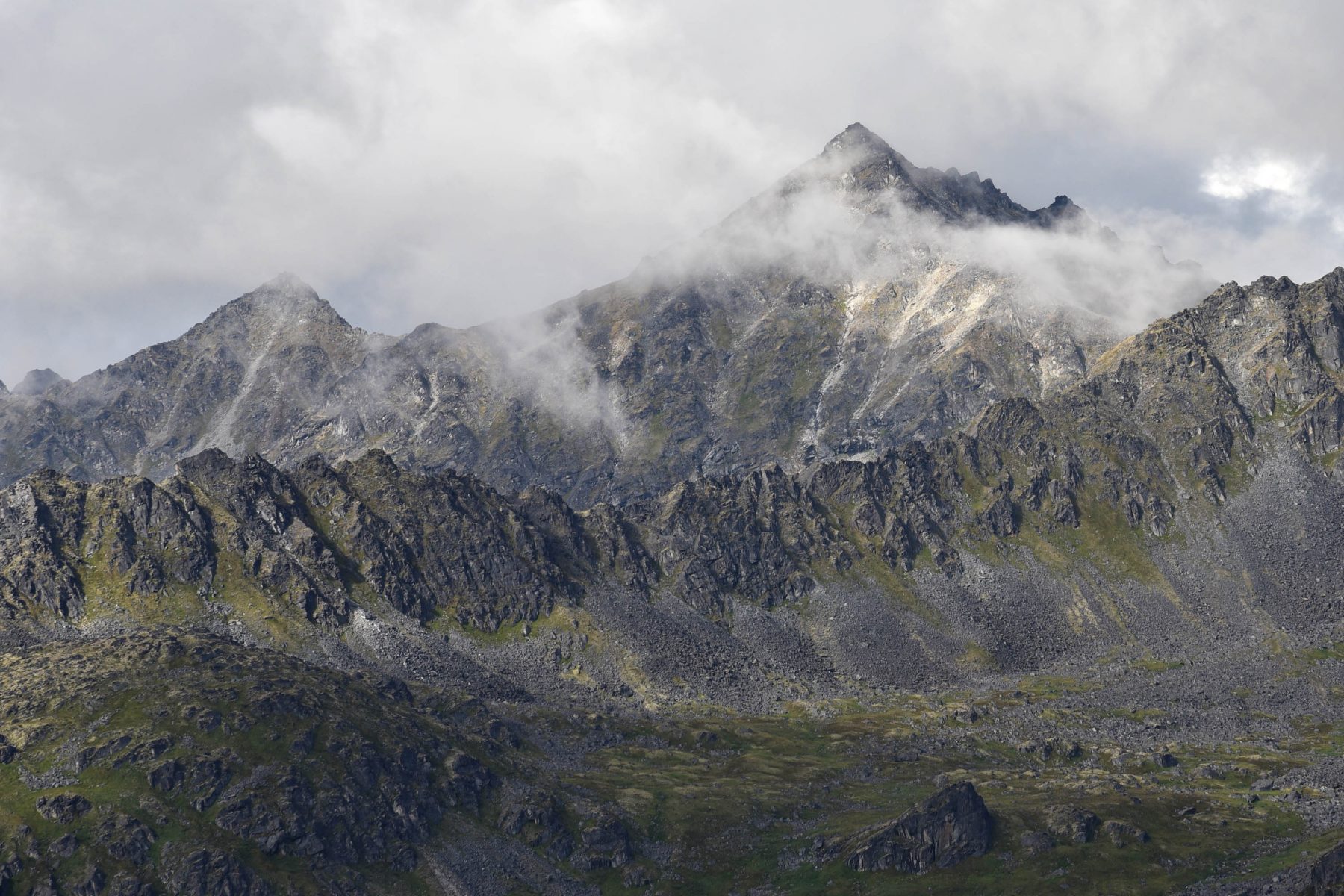 Saxifrage. According to Tom Choate (who I believe named it), it is just “Saxifrage,” not “Saxifrage Peak” or “Saxifrage Mountain.”

In Hatchethead Pass we spotted a few footprints in the dirt–the first sign of other people since we’d left the Bomber Traverse in the early morning. Spotting bootmarks here was fitting, as the tundra bowl between Hatchethead Pass and Dogsled Pass looked like fantastic walking.

Sure enough, the head of the Purches Creek drainage was like a lawn. These may well be the easiest two miles of backcountry in all of southcentral Alaska. 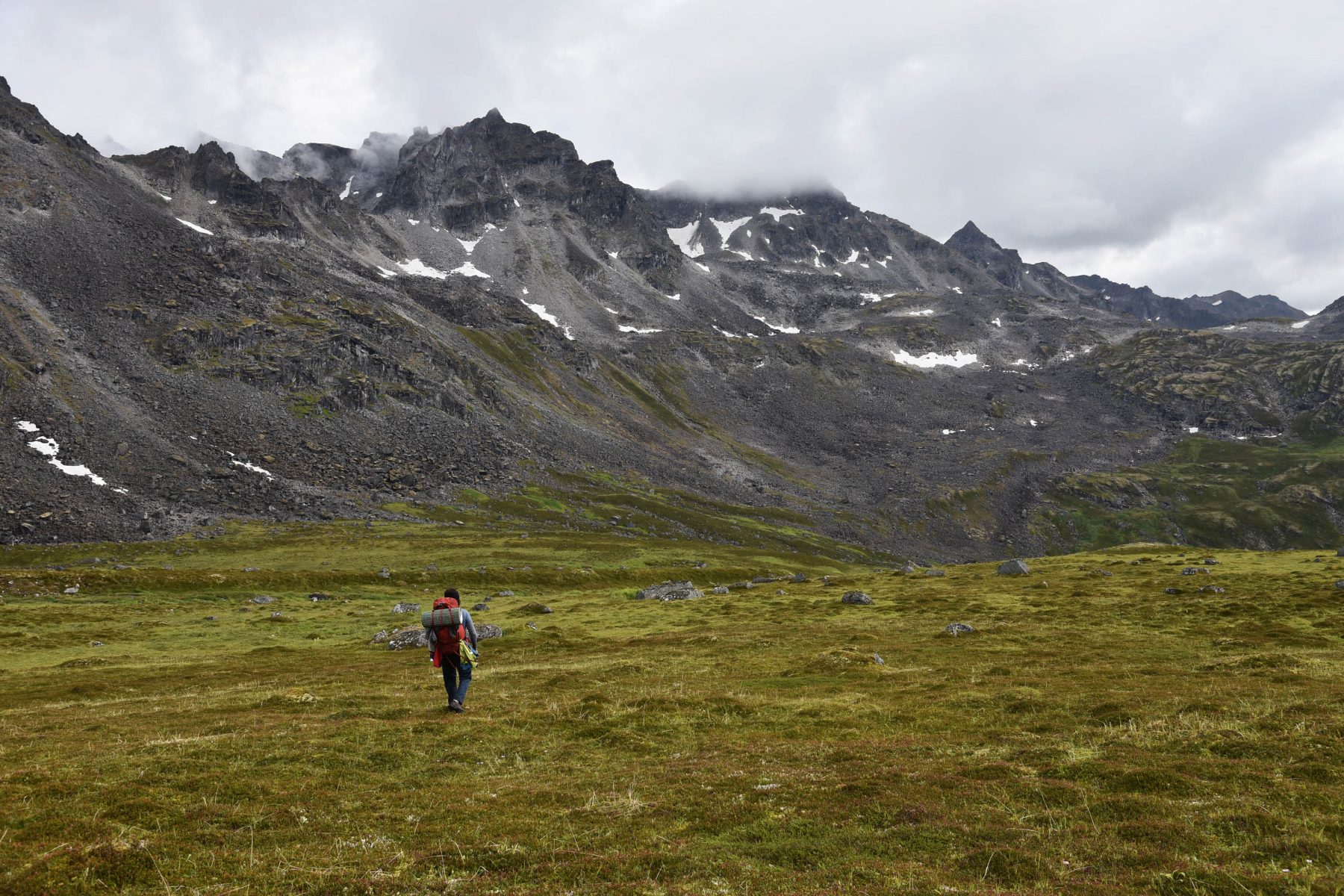 As we climbed toward Dogsled Pass we passed a platform covered in rusted metal and old lumber. The USGS maps suggested that these were the remnants of the Holland Prospect mining site.

Toward the broad pass we lost the tundra and found ourselves poking through a small boulderfield.

We reached Schroff Lake with plenty of light left, but it had already been a long day and this spot was too good to walk past. We set up the tent, peeled off still-wet shoes and watched the sun slide up the mountains while eating hot dinner. 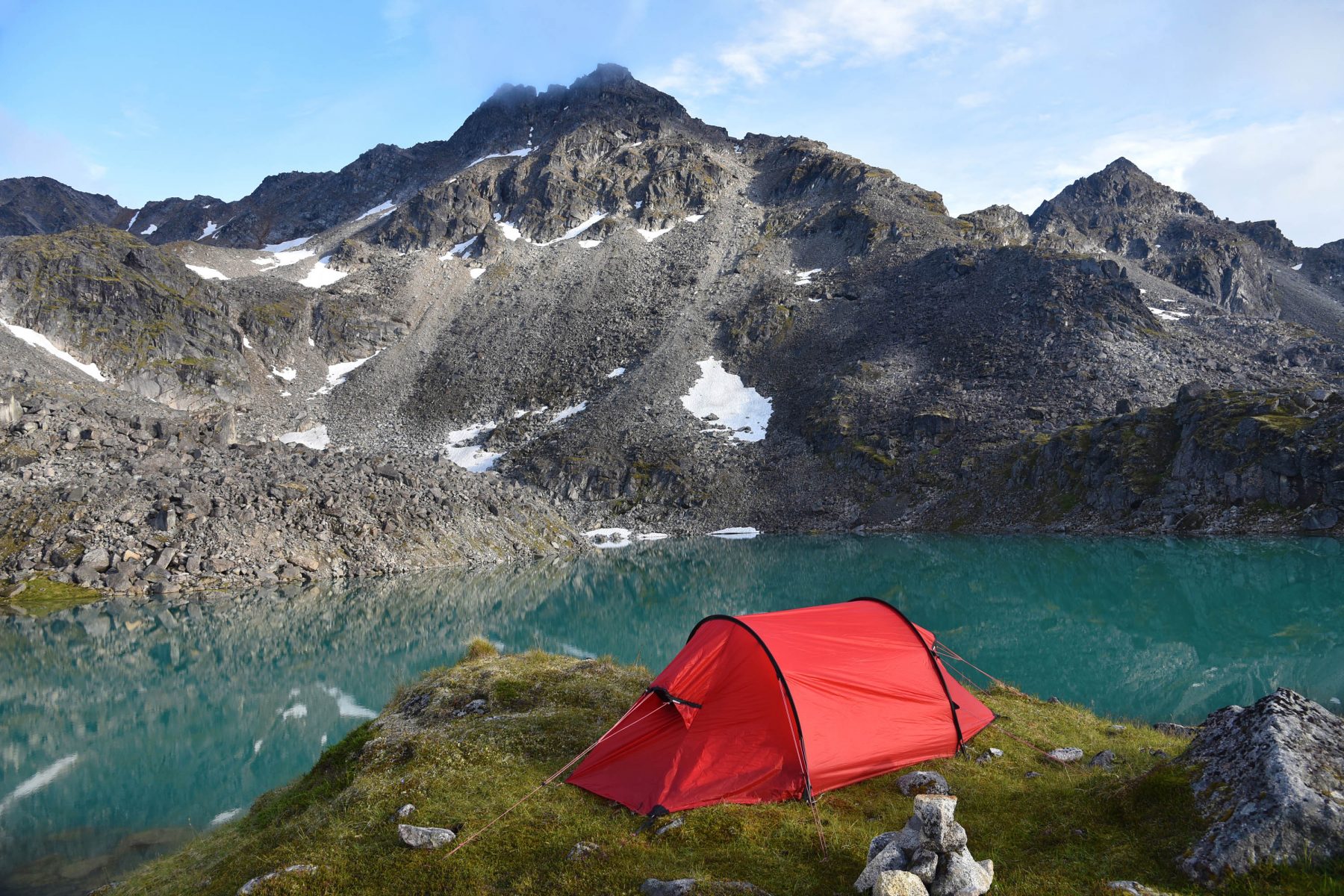 Camp at Schroff Lake, with Gold Cord Peak in the background. The tent is my Nammatj 2.

At this point we were only two miles as the crow flies from the parking lot at Hatcher, and we had our choice of two passes to cross in the morning. Friendship Pass was closer and more direct, but much taller, while Birthday Pass was lower and farther. Before heading to bed I wandered to the far edge of Schroff Lake to do some scouting. To my surprise I found that we were camped right beyond the end of a dirt four-wheeler track leading down a long, brushy tundra valley. According to the maps, we were at the end of Craigie Creek Road. Maybe this would be a third option if the weather turned? 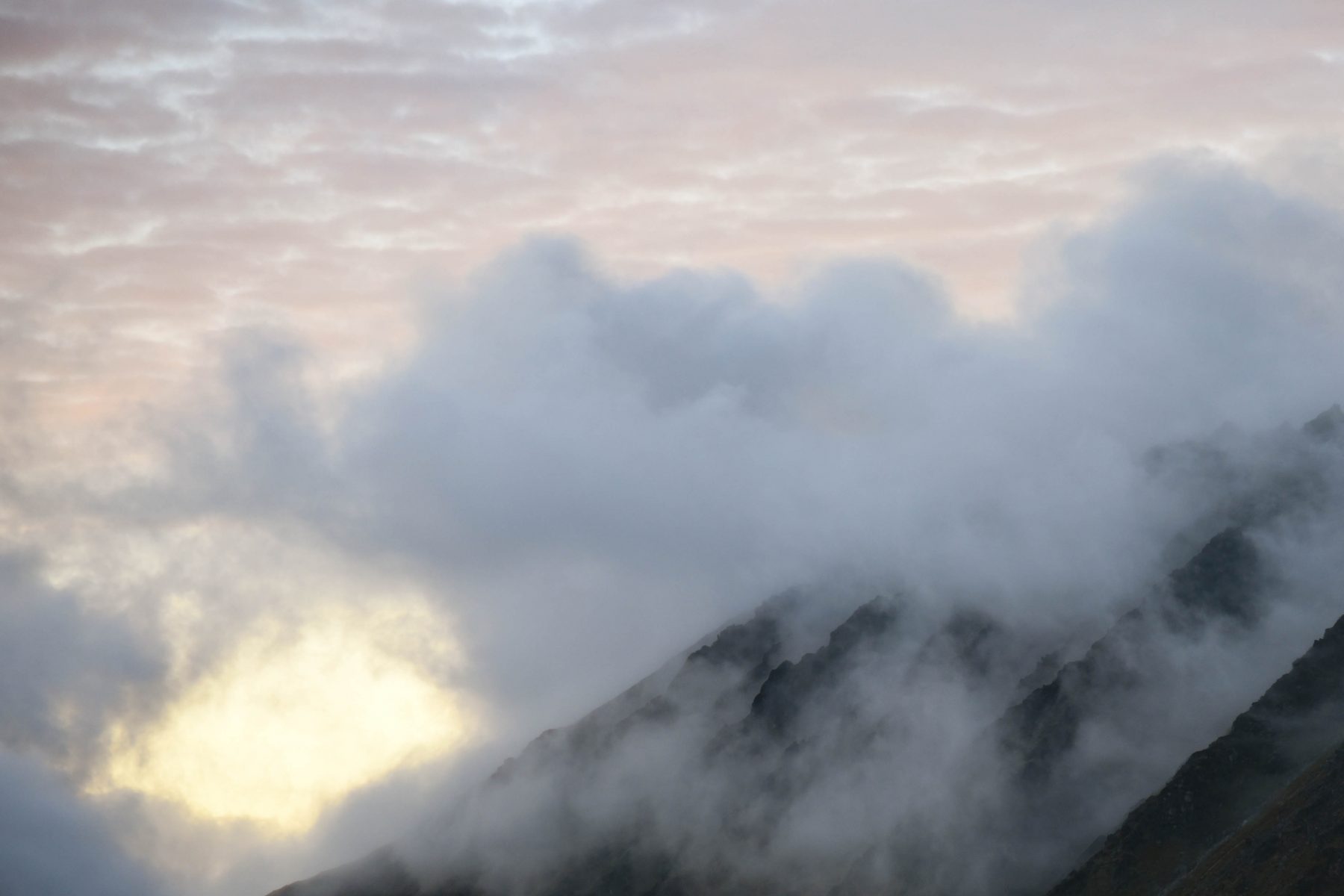 Cotton-candy sunset in the Talkeetna Mountains

During the night the rain returned, and gusts of wind shook the tent. In the morning we reluctantly pulled on our still-damp rain gear, made hot breakfast, and quickly packed up.

Both passes to Hatcher were barely visible through the rain and churning clouds. After a few uninspired minutes standing in the drizzle, we decided to walk Craigie Creek Road out to Hatcher Pass Road instead, and then thumb a ride back to our car. 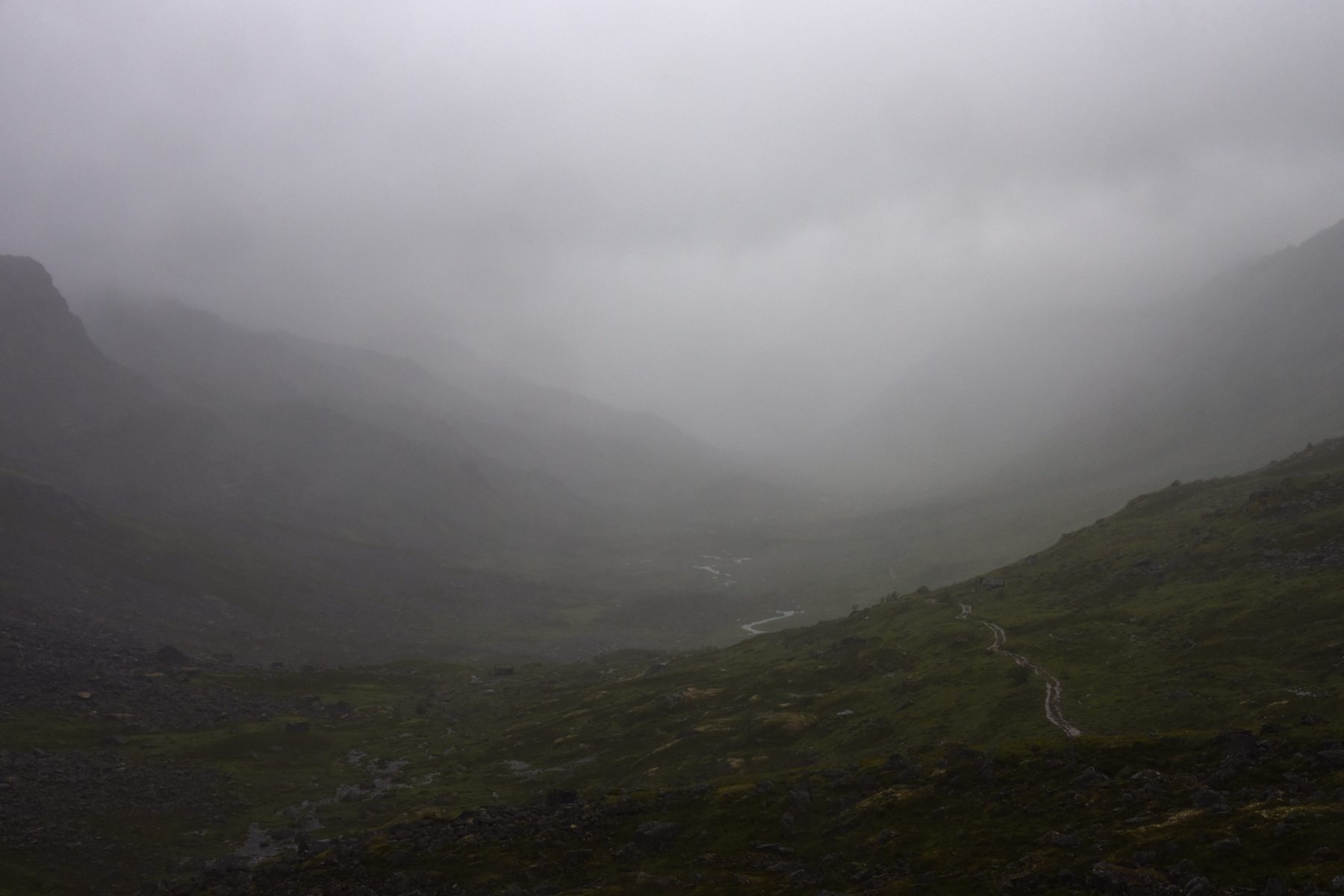 Looking down the Craigie Creek drainage from just below Schroff Lake

Aside from a few oceanic puddles, the Craigie Creek road was smooth and mellow. After yesterday’s zig-zaggy backcountry travel, walking a quiet dirt road below the cloud ceiling was peaceful and almost meditative. 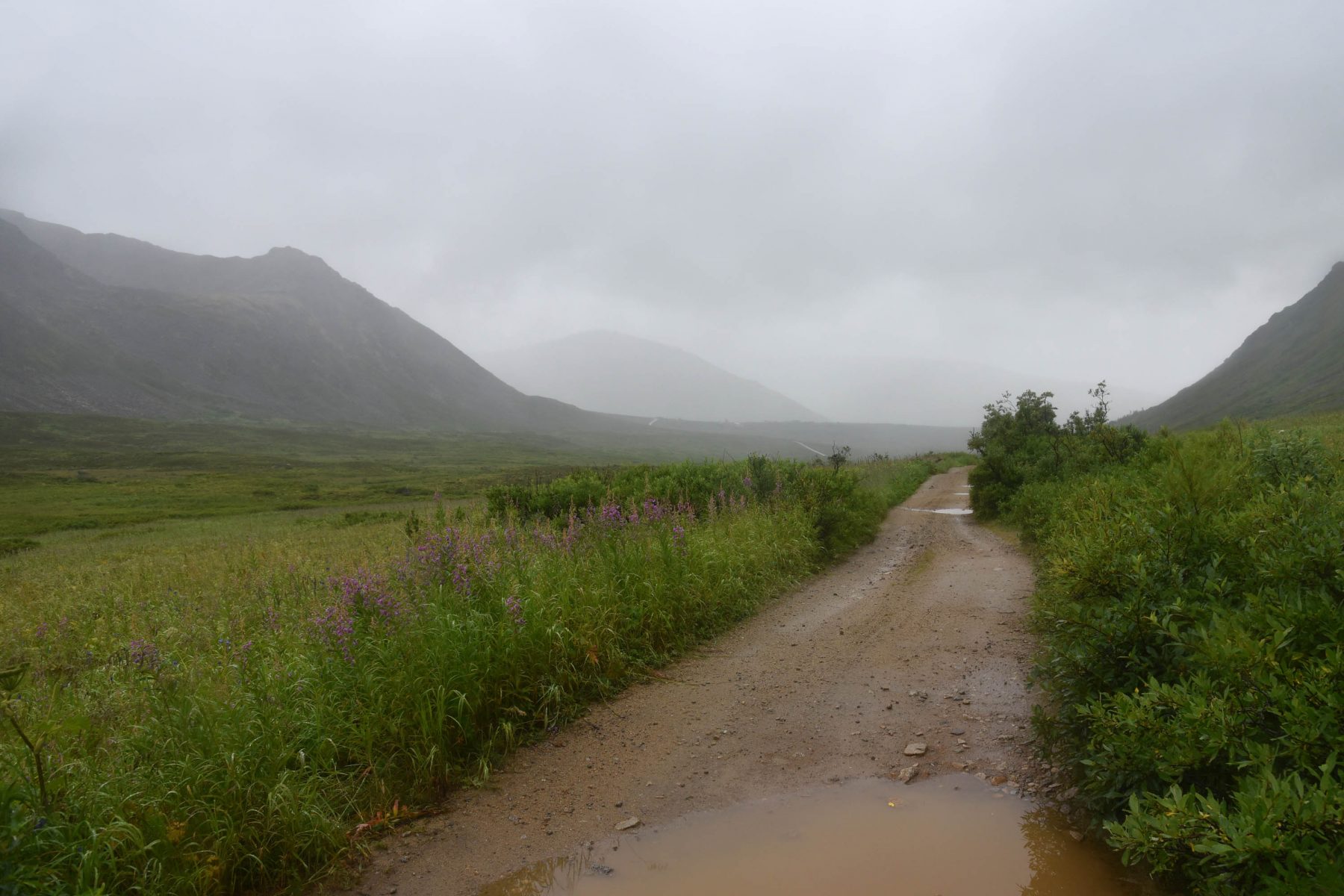 A welcome route for a rainy day

After a couple hours we reached the Hatcher Pass Road, but we weren’t done yet. As it turns out, not many people drive the road in foul weather, and fewer still are willing to pick up a couple soaked backpackers plodding through the rain. Tony and I ended up walking the road all the way over the pass and then stumbled, dripping wet, into the Hatcher Pass Lodge. After filling up on hot food, I asked our server if anyone would be willing to drive us to the Reed Lakes trailhead for some cash. He said he could take his break any time.

Dewey, your driving is a little loose but you and your early 90’s pickup earned every last penny. 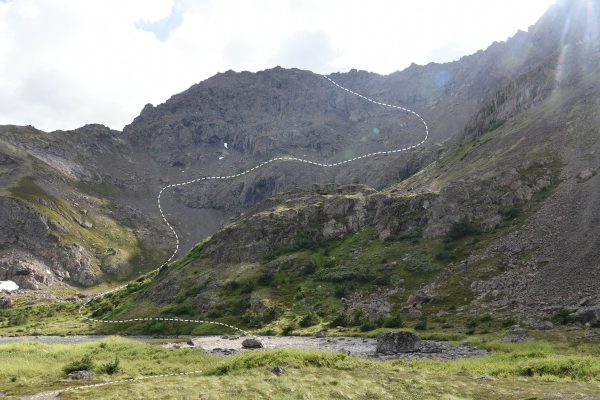 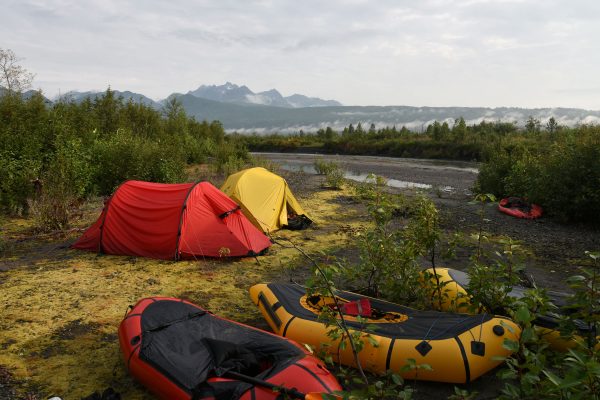 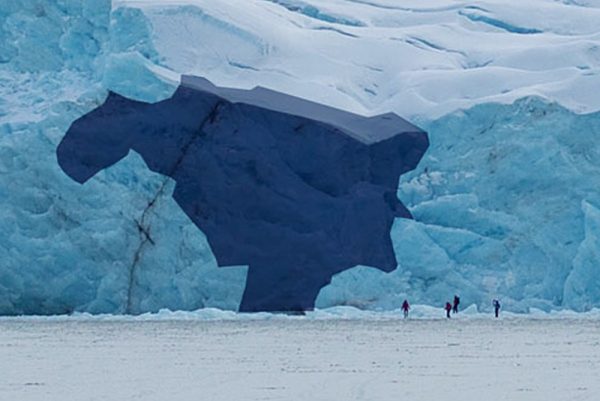 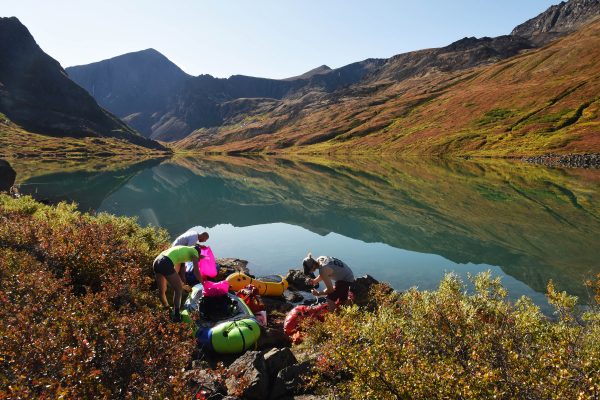 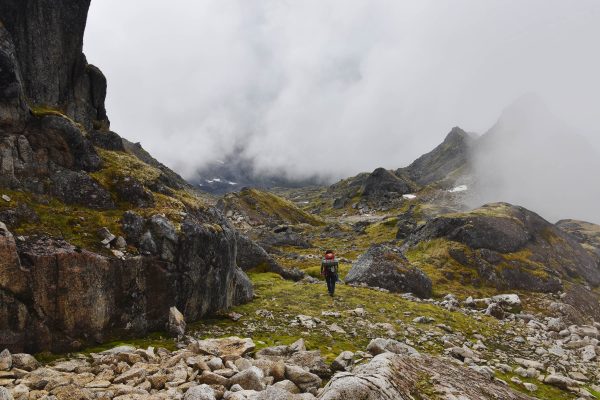 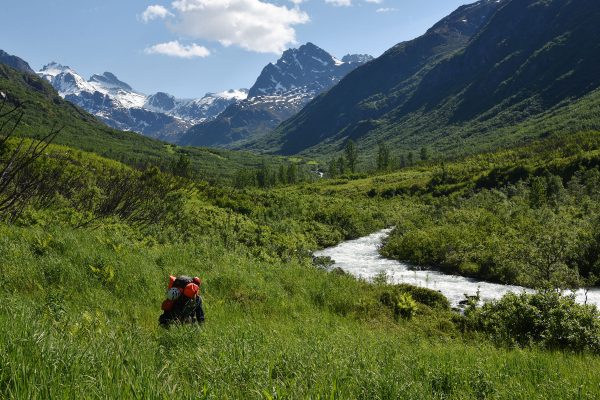 A friend and I were actually looking to do a reverse of this. Go up Craigie, over Dogsled, skirt the one edge past Schroff, over to the pass (Hatchet Head??) that drops into Peters Creek, then maybe towards Bartholf Creek, and out towards Bomber, and possibly onto Mint (basically the tail end of the Bomber Traverse). Then said friend found this post. Too awesome! Great into that helps confirm what we were looking at. And gives us different routes to look at and explore. Thank you for posting this!!

Awesome, glad it’s helpful. The terrain back there is awesome. Just try to stay above brushline where possible.. once you drop below about 3300 feet things start to get pretty schwacky. Happy exploring!

We just got done doing this over the weekend, today (8/15/20) but in reverse (Craigie to Snowbird/Reed Lakes TH). And we got back to Gnome Lake as well! EPIC shit back there, and yeah, we found out the hard way how schwacky some of that is. We had camped out just above the drop to Gnome Lake, and the next day we dropped straight into the Hobbit Creek Drainage from one of the smaller Hobbit Lakes, and totally across from the nice access to the nice grass shelves and ramps onto the Snowbird Trail. But, by doing the schwack central… Read more »