The DMOS Stealth is a blingy backcountry shovel introduced as the ideal tool to build ski and snowboard jumps (called “kickers”). The Stealth’s serrated blade is made from 2.5mm 6061 aluminum, and its 56.5-inch shaft can telescope down to 18 inches and then slide into the blade for easy transport or storage.

The Wyoming-based DMOS (“Do-My-Own-Stuff”) launched the Stealth in October 2015 with a successful Kickstarter campaign, and racked up publicity on GearPatrol, Teton Gravity Research, and Freeskier. Today DMOS offers the Stealth in a range of creative anodized colorways with names like “Moonstone,” “Distressed Logo Lime,” and the 1980’s tropical “Orange Fade.” DMOS doesn’t just want to engineer a more practical tool, they want to make shoveling cool.

Building a tent site on the side of Wolverine Peak with the DMOS shovel. While an avalanche shovel would have worked here (and saved a significant amount of weight on the climb up), the DMOS Stealth made the project a lot more fun.

You’d think that a tool as simple and universal as a shovel should have been perfected thousands of years ago. But the Stealth’s design team would like you to reconsider. The Stealth blade is made from a single sheet of 2.5mm thick aluminum bent along the blade base and folded up on the sides. This eliminates welds or seams on the blade, and also leaves a gap between the sides and base of the blade that allows water to run out. The most unusual element of the design, however, is that the shaft runs through the back of the blade and connects to a socket on the blade’s cutting edge. This reduces the shovel’s carrying capacity slightly (especially its ability to hold larger, irregulary-shaped objects) but the structural advantages are obvious.

When it’s fully packed, the Stealth Shovel’s handle telescopes into itself and then slides horizontally into the trough of the blade. To extend the shovel, depress a series of push-button spring clips to remove the collapsed shaft from the blade and then extend the shaft to its full length. Like the blade, the shaft of the Stealth is made from anodized aluminum. 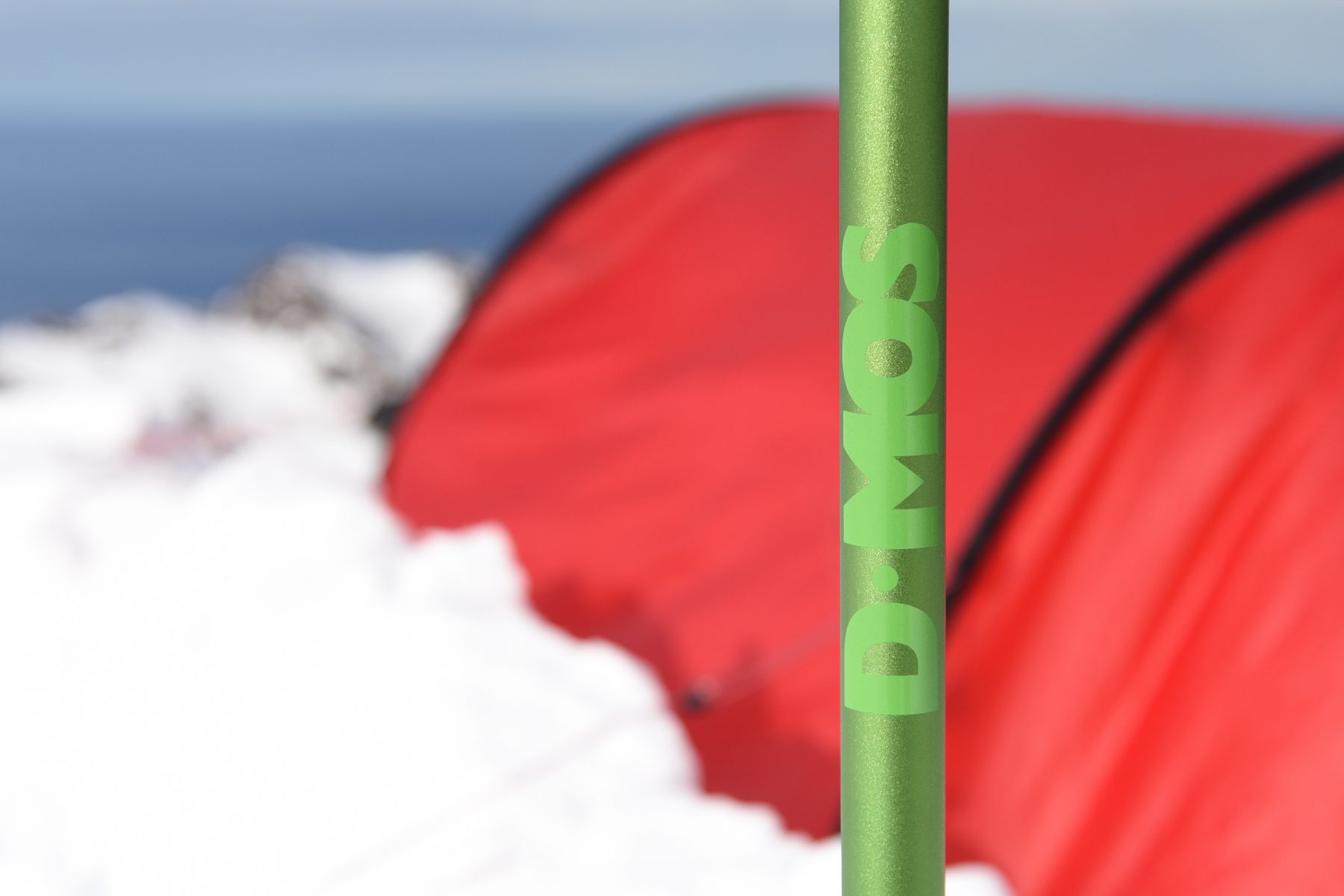 On its website, DMOS dismisses older shovels made out of “a couple millimeters of plastic.” But the DMOS Stealth does, in fact, use plastic parts in several structural areas. While I’m not concerned about the plastic handle, I’m less excited about about the plastic socket that connects the shaft to the blade. If you’re only using the shovel for snow and ice I wouldn’t be concerned (though most plastics do become brittle in cold temps), but DMOS promotes the Stealth as a dirt-digging tool, too. The plastic used in the Stealth appears to be very rugged but I doubt it will outlast the aluminum parts, especially since the plastic socket is located right at the edge of the blade where it could bear the force of a strike against a rock. 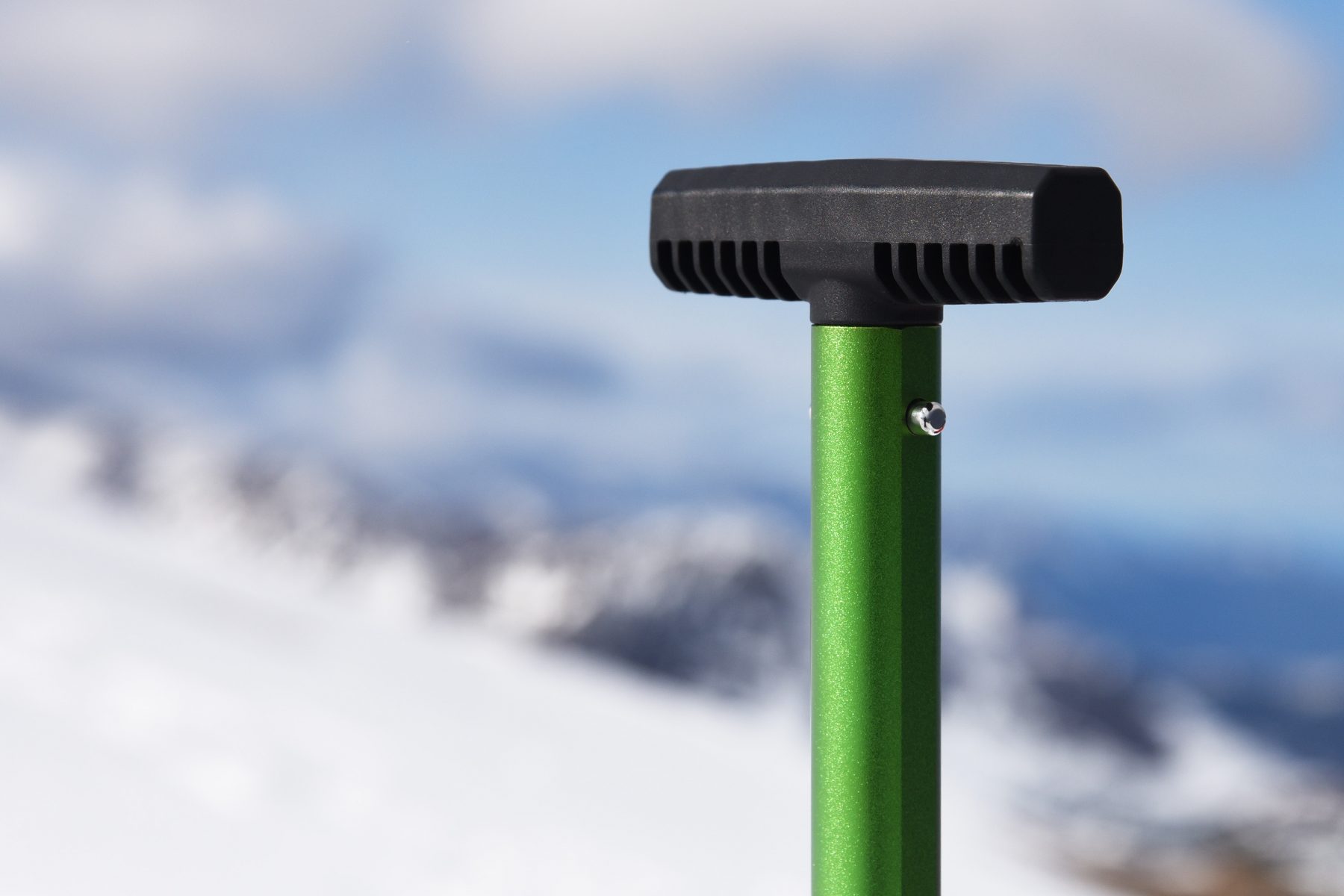 The black plastic handle on the Stealth Shovel is simple, sturdy and comfortable

Unpacking the shovel is a straightforward–if not especially elegant–process. Sliding the shaft out of the blade can have a slight “nails on the chalkboard” feeling because of friction between the matte-finished metal parts. And the stiff push-button spring clips have to be pushed in pretty far to clear the thick aluminum shaft segments. This can be tricky with gloves and cold without them.

There is some play between the otherwise strong shaft segments when they are connected, which can make the shovel feel simultaneously very solid and slightly wobbly. It’s no worse than any multi-segment avalanche shovel, however. 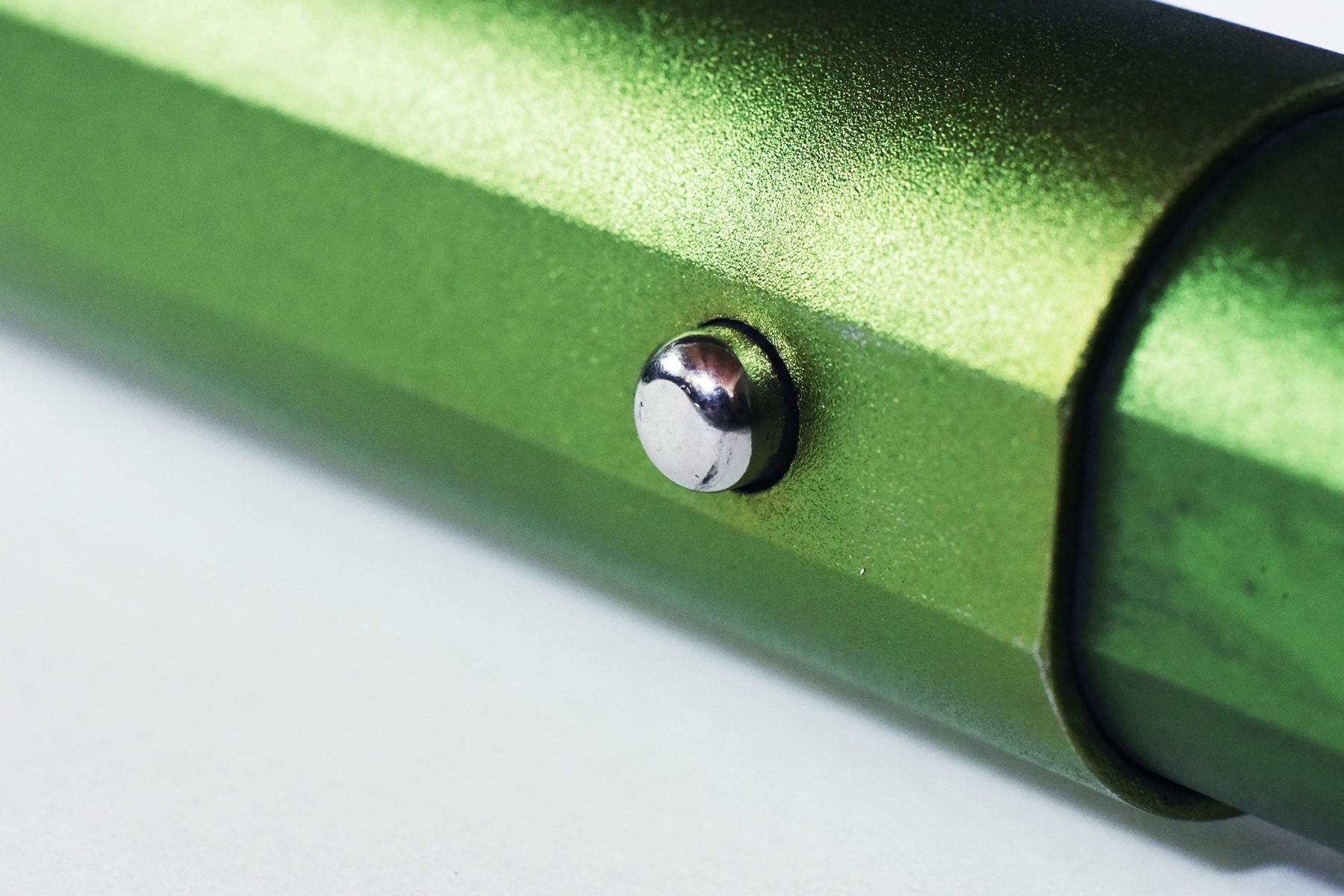 For those heading into the backcountry, the Stealth is much more enjoyable to use than a conventional avalanche shovel. The Stealth’s 56.5″ shaft is roughly twice the length of many avalanche shovels. This extra length gives you more leverage when cutting or moving snow, and has major ergonomic benefits. I actually enjoy digging out winter campsites with the Stealth (and winter snow-chairs, winter snow-tables, etc.). However, at 3.3 pounds, the Stealth is more than twice as heavy as a typical backcountry/avalanche shovel, and bulkier when packed. Despite the Stealth’s many advantages over smaller and lighter shovels, it does become less attractive the farther you have to carry it.

Structurally the Stealth has held up well to several winters of use. The aluminum blade really does feel impervious to breaking or warping, and you don’t feel like you have to go easy on it. However, it may be worth noting that aluminum is actually a pretty soft metal: 6061 aluminum ranks at about 95 on the Brinell hardness scale. Steel, by contrast, almost always exceeds 200. The aluminum blade on the Stealth does show signs of wear after moderate use, though it would take a very long time for this wear to become a functional issue if you only use the shovel on snow and ice. 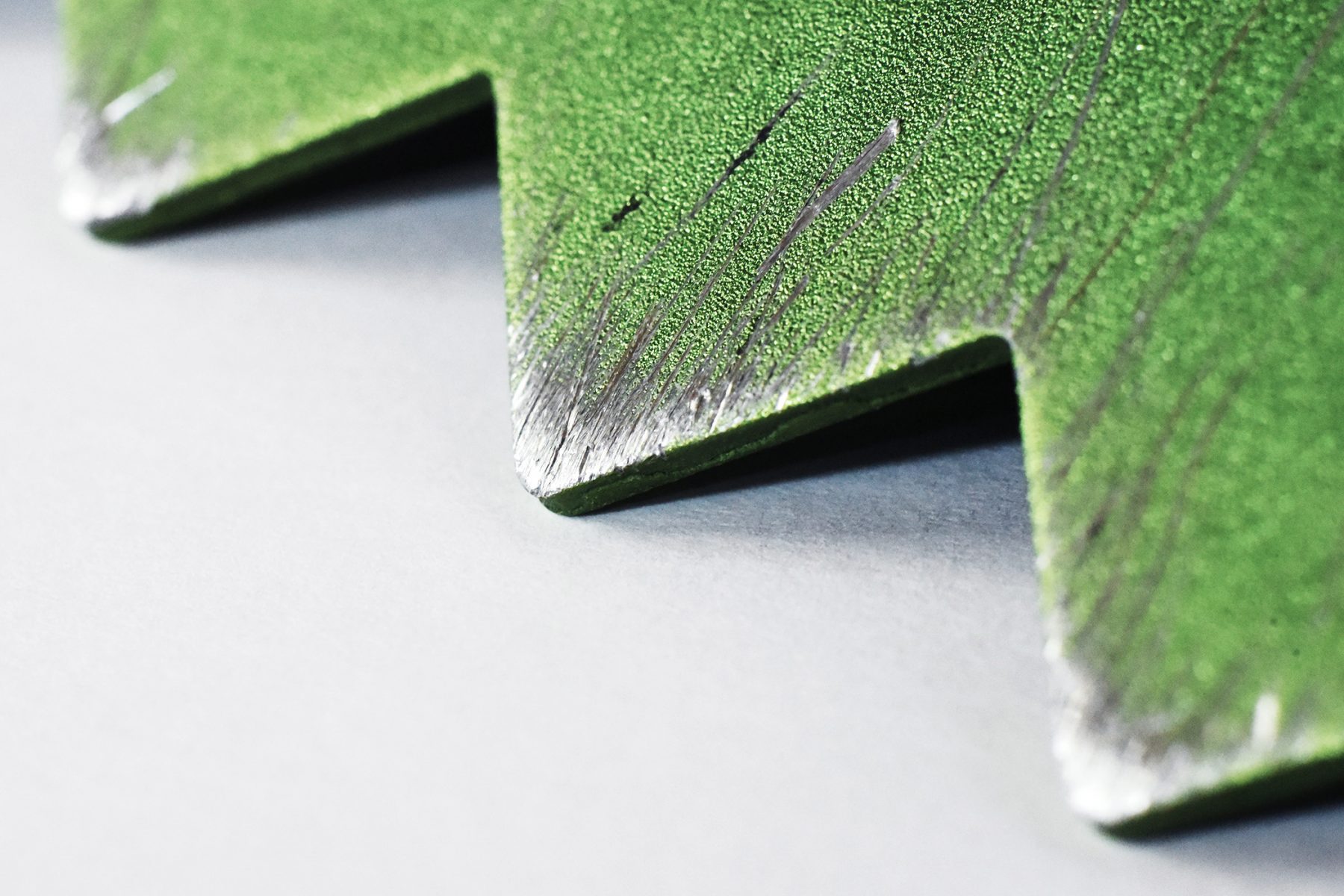 The blade of the Stealth after several uses. Note the scratches and “smear” of aluminum–there’s a reason that most shovels are made of steel.

Anodizing is arguably the most durable finish for aluminum, but due to the underlying metal’s softness the finish does get scratched off over time. This is not a point against DMOS’s finishing process so much as an inevitable consequence of putting an attractive finish on a soft metal product meant to be repeatedly jammed into the ground.

The Stealth’s stout construction and relatively small blade make sense with hard-packed snow and ice. But the Stealth is simply too small and heavy to make sense for loose, dry snow. In 2017 DMOS introduced an “Alpha” model shovel with a much larger blade that looks like a better choice for moving powder.

DMOS deserves praise for pioneering a new product segment and doing it in style. The Stealth works well, looks great, and is made in the USA by a USA-based company. The aluminum blade and shaft segments themselves feel bombproof (if not scratch-proof). The ergonomics of the Stealth are vastly better than those of a conventional, short-handled avalanche shovel.

The DMOS does stumble a little in the details: extending and collapsing the handle can be slightly frustrating and play between the handle segments make the shovel feel less solid than it probably is. The plastic hub at the cutting edge of the blade is a little surprising coming from a company that criticizes the durability of plastic.

DMOS initially pitched the Stealth as a specialized tool for building ski and snowboard kickers. They’ve even applied to register the trademark “kicker tool.” But on their website they have much broader aspirations for the Stealth: they compare it with backcountry avalanche shovels, and market it to snowmachiners, car owners, ice fishermen, RV owners, “Brooklyn brownstone dwellers”, and “gardeners.” There’s no doubt that the Stealth can handle abuse, but gardeners would be better-served by a less expensive one-piece steel-bladed shovel with a pointed tip for penetrating soil.

So where exactly is the Stealth the perfect tool for the job? The Stealth excels in situations were an avalanche shovel would be too small or fragile, but a larger one-piece shovel would be cumbersome or heavy. Think short winter camping trips, snowmachine expeditions, or packed inside a vehicle for winter shoveling. If the Stealth ends up sitting in your car unused, you’ll at least appreciate its sharp aesthetics. If you do use it, you might notice its minor flaws but you’ll still appreciate its solid ergonomics, durability, and clever design.