Many winter sleeping bags are given names that conjure up warmth, such as the “Inferno,” “Torch,” or “Furnace.” But that would be too conventional for Valandre, which named their bag after a late ’60s Dutch rock band whose hits include “Never Marry a Railroad Man” and “Blossom Lady.” Valandre’s “Marie Antionette collar” system, which cinches down on your neck, is named after the guillotined French monarch. 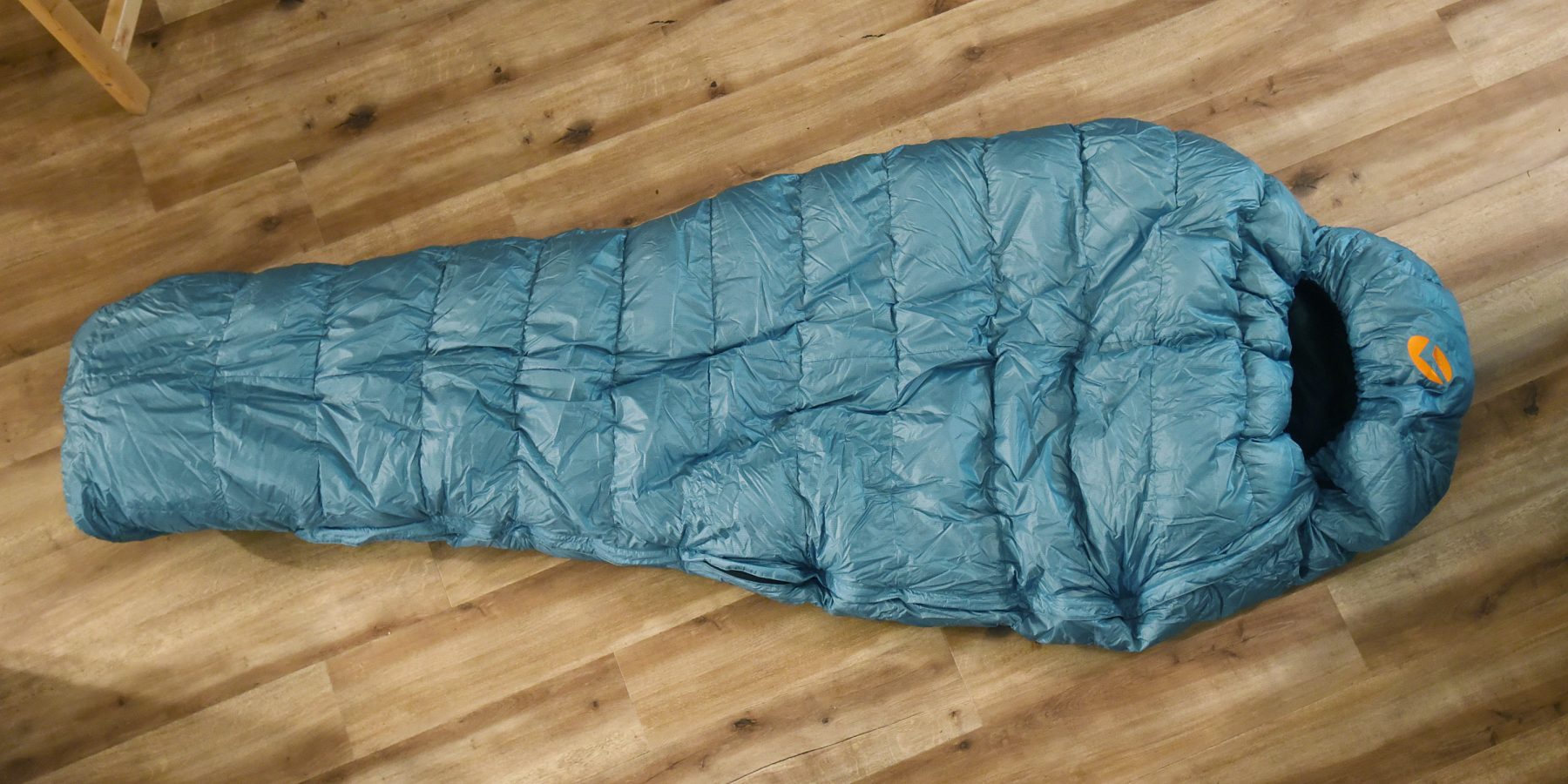 Names aside, perhaps the most curious aspect of the Shocking Blue is its temperature rating. Sleeping bags are typically referred to based on a standard that approximates the “lowest level of comfort.” A 20 degree bag, for example, should keep you comfortable down to 20 degrees. Outdoor Gear Lab lists the Shocking Blue at -10℉, CampSaver claims -25℉, and EMS puts it at an authoritatively demical-placed +10.4℉. On its own website, Valandre rates the Shocking Blue at +11℉ and -13℉ on the same page without explanation and the Shocking Blue Neo (which shares claimed dimensions, fill weight, and total weight with the Shocking Blue) at -3℉ and -4℉.

What is going on here?

According to Valandre, the Shocking Blue uses 1 pound 11 ounces of fill down from the “French fatty gray goose.” This weight of down is typically found in approximately 0-degree-rated bags by other manufacturers. Valandre states that down used in their products comes from geese that are allowed to roam outside, though in a 2009 post on Backpacking Light a user claiming to be the designer for Valandre does seem to state that the down comes from geese used in the fois gras industry. It may be worth noting that fois gras production is banned in many countries and in California on animal welfare grounds. In any case, the down used in the Shocking Blue is of excellent quality–soft, lofty, and evenly-dispersed in the sleeping bag’s baffles. Some sources describe the down as 850+, and some describe it as 800. 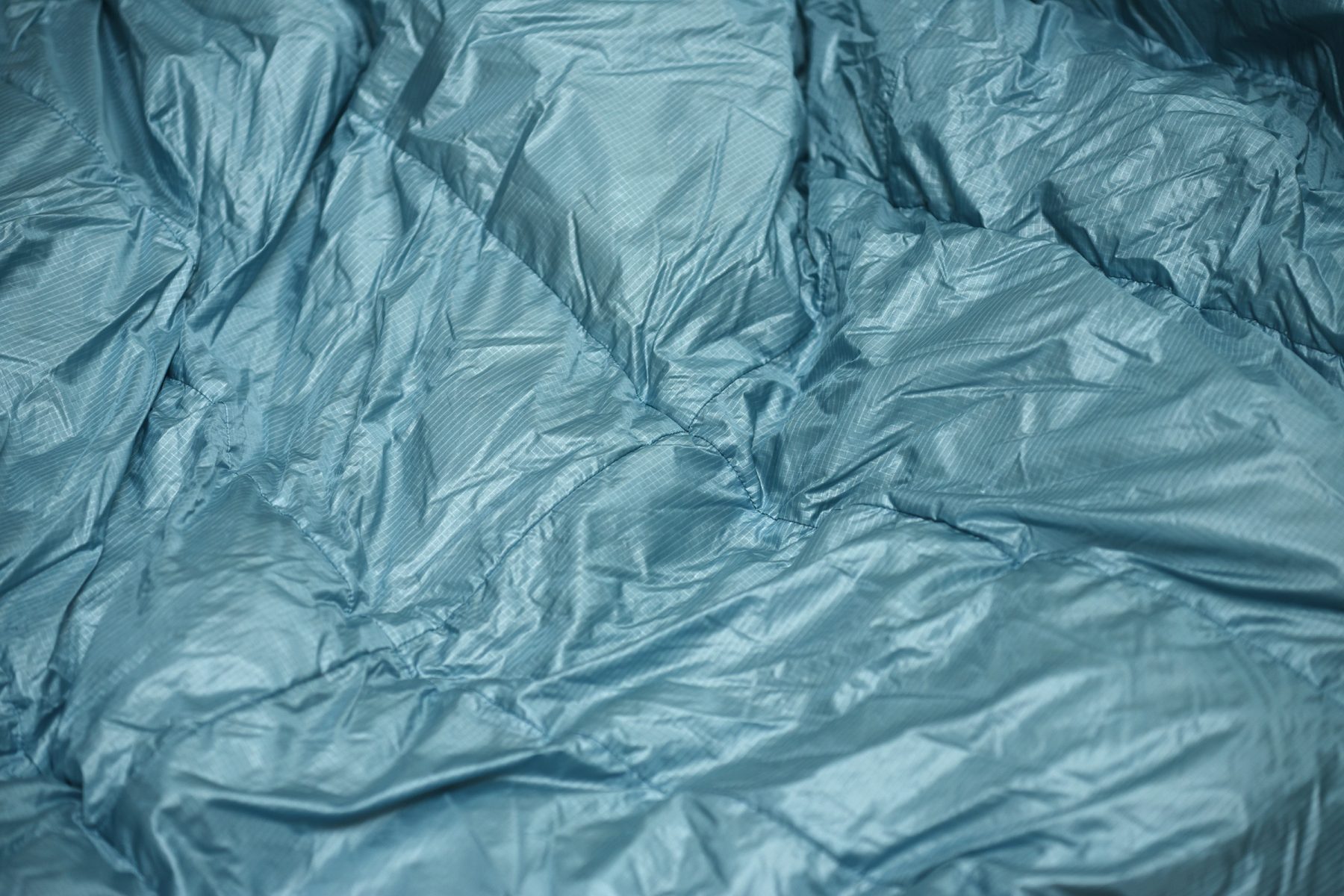 The Shocking Blue’s polyamid nylon Asahi-Kasei outer shell fabric. Some reviewers ding it for being wrinkly, but personally I love Valandre’s seeming indifference to showroom aesthetics.

The Shocking Blue’s 80 separate shell fabric panels are designed to naturally lift off a sleeper. Valandre alternately calls this a “tubular bell” and “3D-baffle” design.

Valandre seems to be bucking the industry by spec’ing a non-waterproof fabric for the Shocking Blue shell, but they may be on to something. Despite advances, waterproof-breathable fabrics still don’t breathe as well as non-waterproof fabrics. On other high-end sleeping bags with waterproof-breathable membranes, I’ve observed the down sticking lightly to the inside of the shell by the morning, indicating that water vapor from perspiration has cooled and become trapped on the inside of the membrane. I have never noticed this issue with the Shocking Blue. A waterproof-breathable fabric may be better at shedding water from the outside, but how often is liquid water sloshing around in below-freezing environments? The Valandre’s DWR shell fabric still does a good job blocking water, but does a great job handling the moisture on the inside of your bag.

The down-stuffed Marie Antoinette collar consists of a zipper, pull-cord, and velcro assembly. Once in place it is very comfortable and does an excellent job conforming to your neck without rubbing or feeling claustrophobic. However, it is a little fussy to assemble, especially with gloves on, and if you roll around in your sleep the velcro side can come apart. 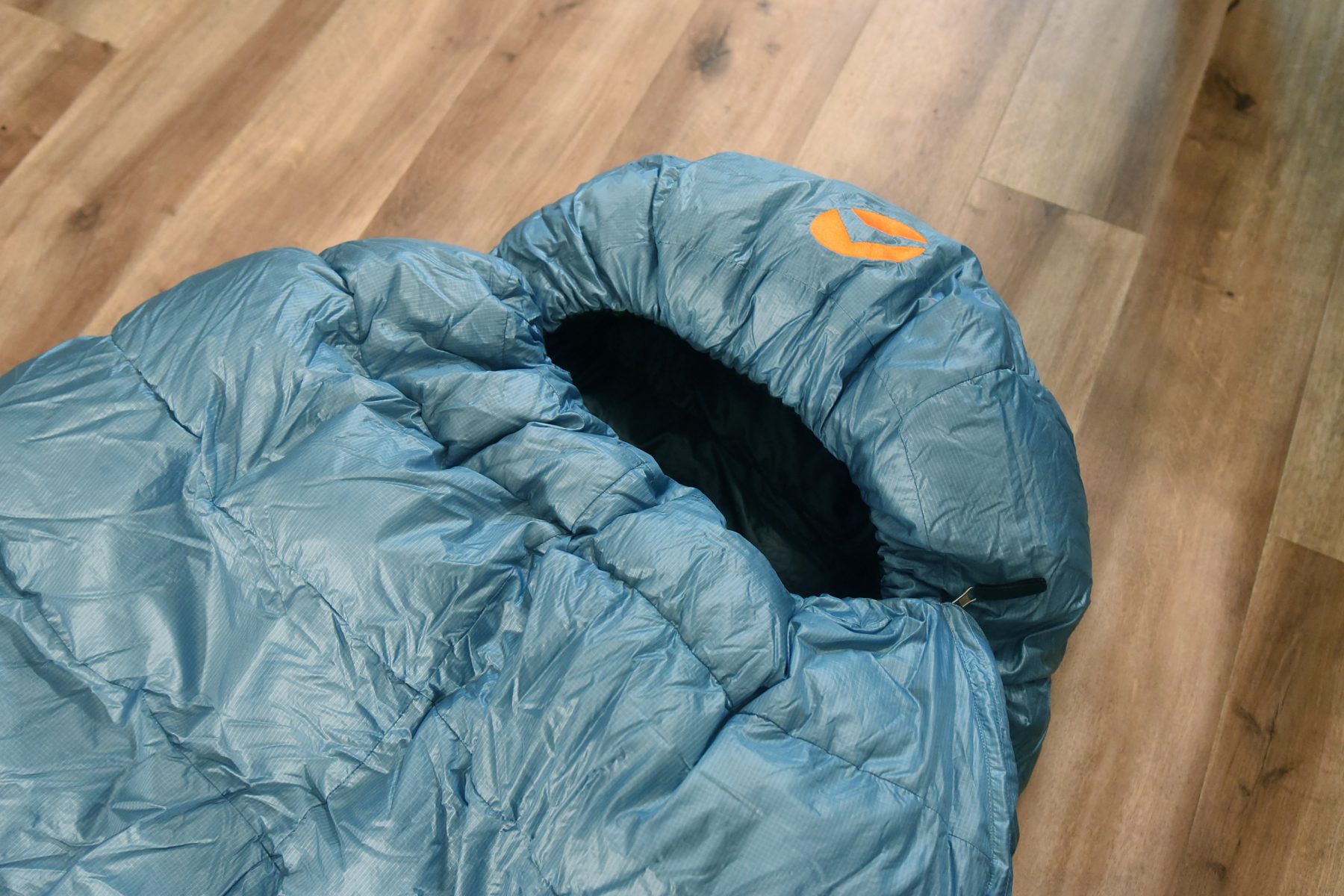 The plastic-toothed full-length YKK zipper does occasionally snag but isn’t hard to free. The zipper is loosely covered on the inside of the bag by a down-stuffed flap, and contact with the cold zipper has never woken me up at night. 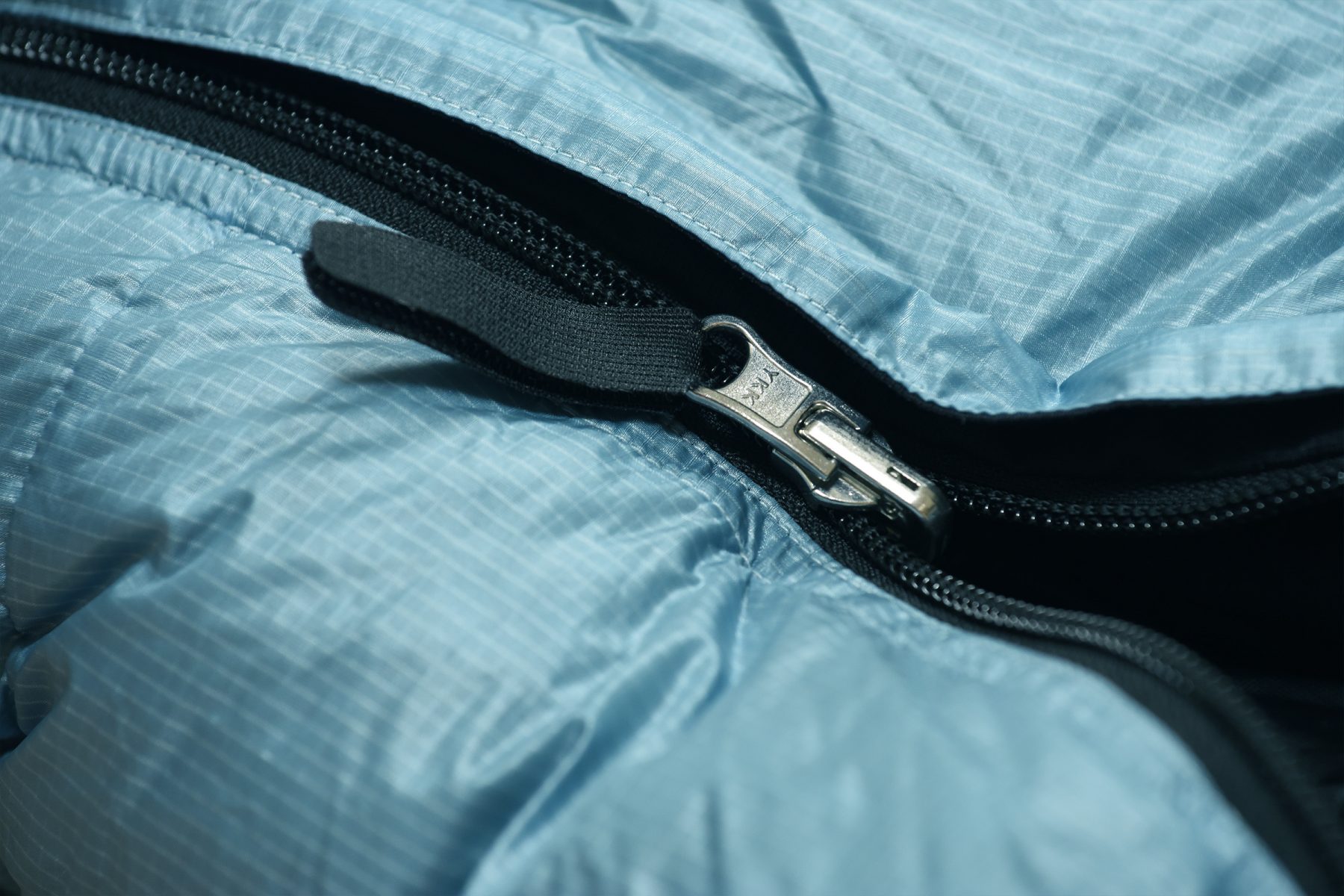 YKK zipper on the side of the Shocking Blue

The Shocking Blue really is big in the torso. Even while wearing a fleece and a super-puffy Arc’teryx Cerium SV belay jacket I still have space left to move. Valandre describes the Shocking Blue as “compatible” with its own down suits. As far as I can tell, this “compatibility” refers to the spacious interior dimensions of the Shocking Blue, which provide enough room for a mountaineering parka. Extra room in a sleeping bag can lead to thermal inefficiency because your body has to heat extra air, which can then circulate away from your body. It’s probably fair to say that you can use the Shocking Blue like a conventional sleeping bag, but it seems to be designed for use in conjunction with worn insulating layers.

So what about that temperature rating? Well, the bottom line here is that conventional temperature ratings are hard to apply to this bag because it’s not designed to be used like a conventional sleeping bag. Based on my personal experience, while wearing minimal clothing the comfort rating for this bag might be about +10℉, but again, that’s not what this bag is designed for. With my Cerium SV down jacket I have slept happily through the night at -10℉ in the Shocking Blue, and have no reason to doubt those reporting that they’ve been comfortable below -20℉. 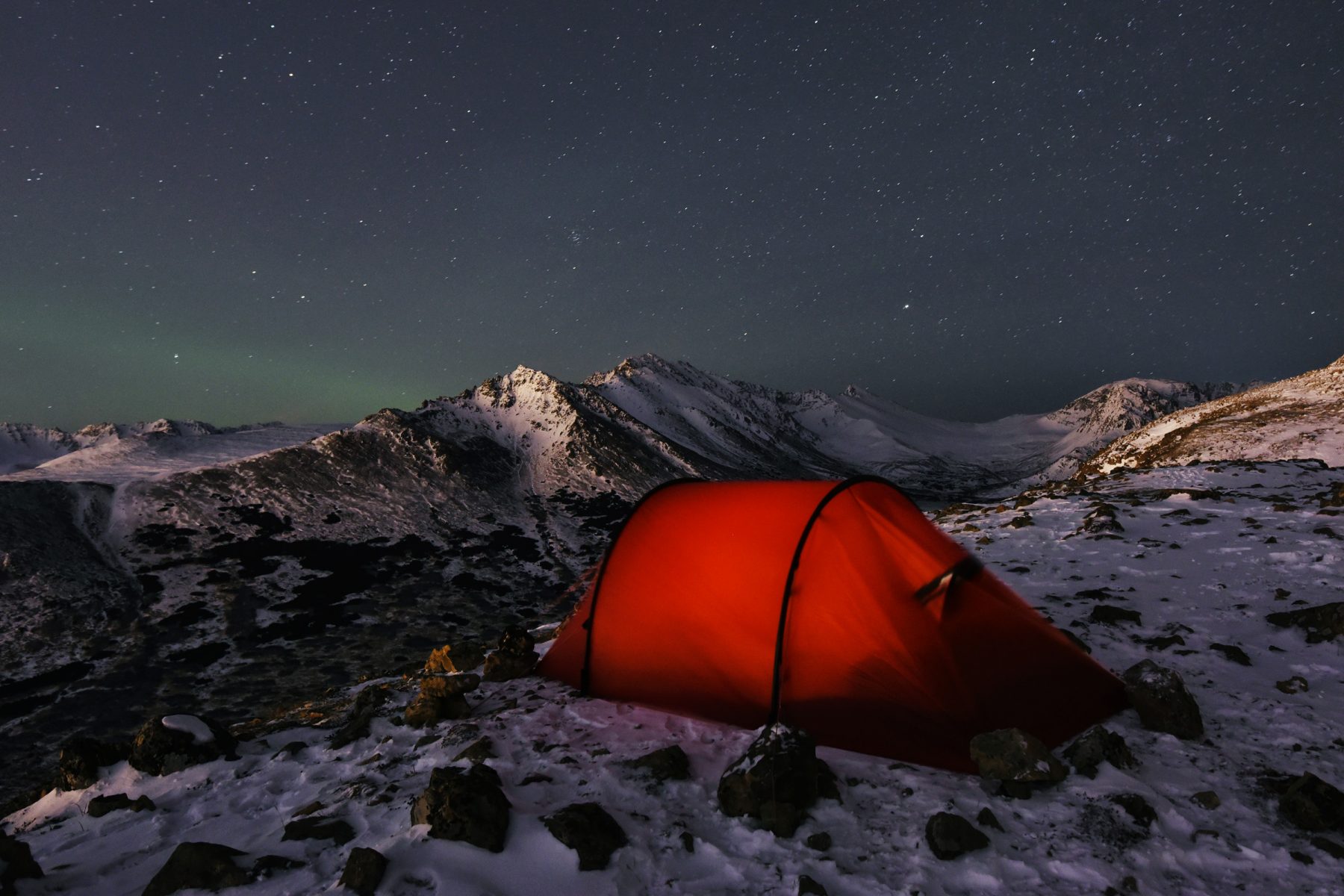 The Shocking Blue ships with two accessories, a compression sack and a larger mesh storage bag. Neither is especially flattering to the Shocking Blue. The non-waterproof compression sack is a bit crude and heavy, and the single line of widely-spaced stitches on the drawcord sleeve has already started to pull out on both sides of the drawcord. The larger mesh bag for long-term storage is about 50% too small and doesn’t allow the Shocking Blue to fully loft. I bought a cotton storage sack from another company.

On its website’s “About” page, Valandre has a bolded subheader for the topic “Philosophy.” The text reads:

“If you are looking for a philosophy in Valandre, you came to the wrong place. Valandre has no philosophy at all, and producing technical high altitude expedition is not a little dream world, where the designers float around in an idle dreaming… SPORT has never been a philosophy.”

Valandre’s swaggering, vaguely nihlistic ad copy certainly has personality, and naming a sleeping bag collar after a beheaded woman suggests an impressive commitment to dark humor in a consumer sales environment. But while Valandre might not have a “Philosophy” in some college-class sense, it nevertheless does have many ideas, and at least some of these are worth sharing. It may be worth noting that I’ve sent messages to Valandre twice with questions about their products, and neither time did I receive a response. At least some of the confusion over the Shocking Blue is simply a result of the company’s reluctance to communicate clearly with consumers.

The Valandre Shocking Blue is a obsessively thought-out and fastidiously built sleeping bag that probably isn’t for everyone. Those who want a conventionally-fitting bag and/or who don’t want to layer inside their bag should probably look elsewhere. But those willing to give Valandre’s concept a chance will find that they can push this bag well below where its weight (or listed comfort limit) suggests. Those with large torsos or who simply want a lot of room to move at night will also be thrilled by the Shocking Blue’s spacious design.

I have the Bloody Mary and the wider torso does give room to move around a good bit. The bag has top shelf sewing. The stuff bag is junk, get a Sea to Summit sill nylon model. The down quality is top quality as well. Liberty Mountain in Utah is the North American rep so give them a call with questions you may have. A somewhat similar bag would be the Western Mountaineering Badger Micro Fiber although just a bit narrower cut in the upper body. Close on temp rating in my estimation. I like the Bloody Mary a lot.… Read more »

I use two Feathered Friends sleeping bags and would say that Valandre and FF are in the same league in terms of build quality. The big difference is really in the design philosophy: Valandre’s bags seem to be sized for specific uses (wearing a down suit inside the Shocking Blue, for example) and seem to have more “features” like the anatomical footbox and relatively complicated Marie Antoinette collar. The Bloody Mary looks like a nice bag–similar design to the Shocking Blue but a little lighter and slightly smaller in the torso.

Thanks for sharing your experiences.
I don’t really understand your confusion…

EN13537 is the international recognised standard for measuring insulation capabilities for sleeping bags, used by Valandre as well.
All shared on their splendidly informative website:
http://www.valandre.com