One of my rules on Winterbear is that before reviewing a product, I’ll use it outside many times in a variety of conditions. However, occasionally a product is so flawed that I have to stop using it before this condition is met. Unfortunately, Patagonia’s R3 Fleece Hoody is one such product.

I am a huge fan of fleece. It’s light, comfortable against bare skin, and handles moisture far better than down. And it typically lasts forever–one midweight Polartec fleece I bought in the late 1990’s is still in my gear closet and gets regular use.

After retiring the burly R4, the R3 became Patagonia’s heaviest-weight technical fleece. But that’s not to say that it’s heavy per se: the R3’s main fabric is soft, stretchy, and surprisingly lightweight compared with Patagonia’s previous offerings. It includes both thoughtful design elements (such as dual chest pockets and snug elastic on the cuffs) and some that are a little questionable (including an unnecessary “reversible” design).

Unlike some of Patagonia’s boxier mens jackets the R3 has a trim, athletic fit that reminds me of offerings from OR or Arc’teryx. My limited impression of the R3 in use is that it’s warmer than its weight suggests, and breathes very well while cutting a light breeze. 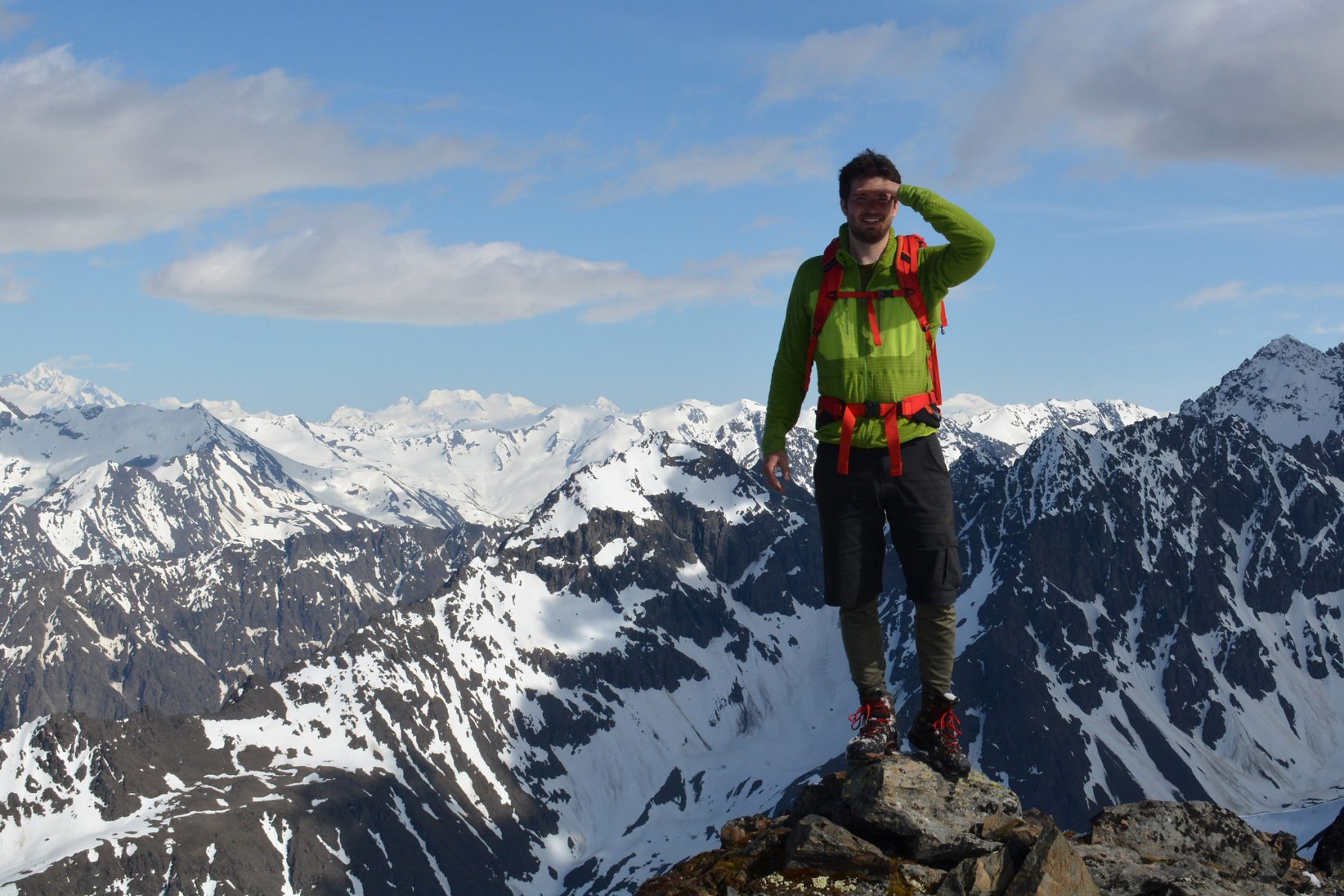 The R3 sheds like a neon green husky blowing its winter coat. The jacket left my backpack full of green microplastic fibers, and readily shed green fuzz onto my shorts and car seat. A very light pinch of the jacket’s fuzzier side was enough to dislodge a downy clump of green polyester.

The shedding did not slow down after several wears or after washing the jacket. When I found myself picking green plastic fibers out of my food, I decided to call it quits. 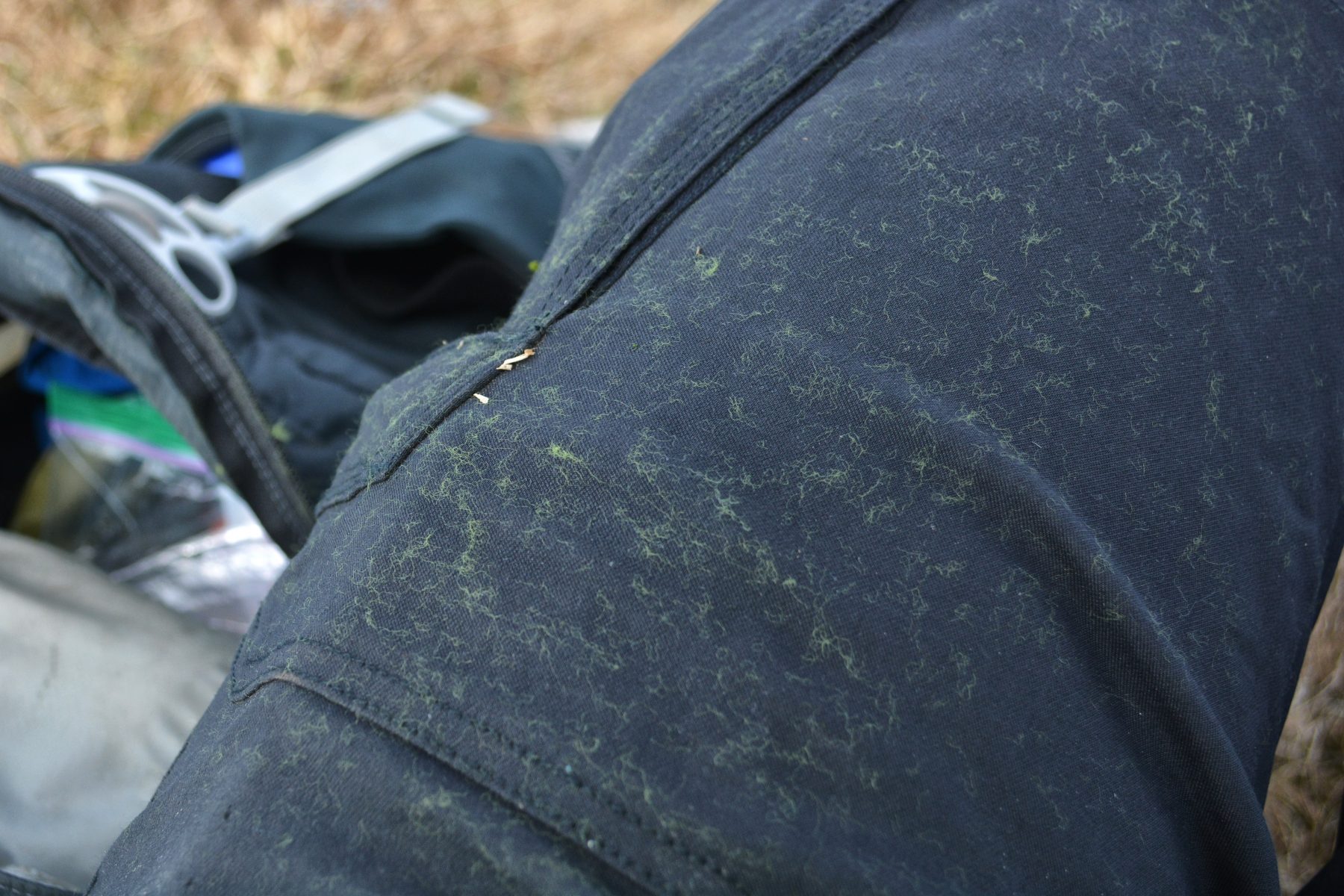 When I contacted Patagonia about the shedding, I was told in an e-mail “this isn’t something that happens with a lot of R3’s but we do hear about it from time to time.” Patagonia offered to replace the fleece at no cost. I dragged my heels on the return and didn’t end up receiving a replacement till August 2017, over a year later. I chose a different color, hoping that the shedding issue might have been limited to an older run of one color. Unfortunately the black replacement that I received shed just as badly.

Patagonia has received repeated complaints about shedding in the public product reviews on their website. Even four and five-star reviews cite shedding on their gear and car seats. As one user put it, “…I also wore it on the car ride home and the interior of my car looked like I’d murdered a muppet.” 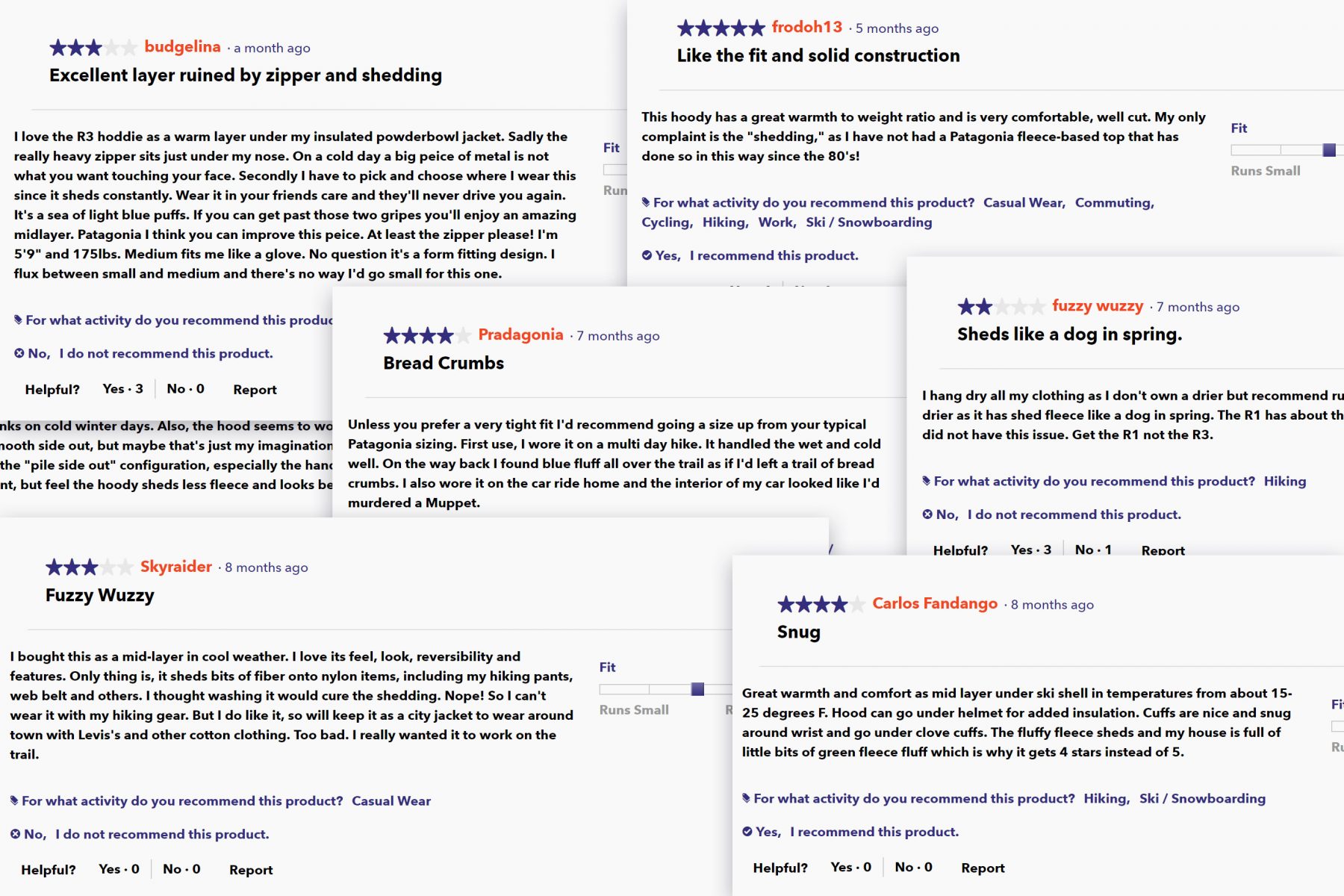 Product reviews on Patagonia’s website suggest that Patagonia was repeatedly informed about problems with shedding on the R3, but continued shipping the product

Just to make sure I wasn’t imagining things, I stopped by REI and tried lightly pinching about a dozen fleece coats from other manufacturers. None shed fibers like the R3. Patagonia’s lighter-weight R1, despite looking very similar to the R3, did not shed at all.

For many years in the 90s and early 2000s, Patagonia dominated the high-end performance fleece market. I admire Patagonia’s apparently genuine commitment to corporate responsibility and their return/repair policies are among the best in the business. Patagonia makes some excellent products–I’m a longtime fan of their Capilene base layers, for example. However, a product as obviously (and obnoxiously) flawed as the R3 hoody never should have made it through the most basic quality control. Even good companies make mistakes, but the fact that Patagonia continued shipping self-destructing R3’s suggests a carelessness that is not consistent with the company’s reputation.

Patagonia has put a lot of focus on the lifestyle/casual market: the “technical” fleece category on their website currently includes twelve products, while there are twenty-one in the “casual” category. Perhaps they’ve simply ceded some of the the high-end market to rivals. In any case, it is unfortunate that the best thing about the R3 is Patagonia’s gold-standard return policy.

I am curious, since the R3 is reversible; do both sides shed evenly, or is the jacket shedding more from one side vs the other?

I believe the shedding was from the longer, shaggier side but it’s hard to say for sure since it shed even when it was just balled up in my backpack.

I’ve had many mine (Black) since 2016 and wear it a lot. Mine has not shed any material whatsoever – it’s great.

Thanks for the feedback. It’s good to know that some of these jackets don’t have this problem, since otherwise it’s a great piece of gear.

Askaline
Reply to  Mark May

I have had mine (Royal blue) since 2014 and used it extensivly. It never shed anything and is still going strong. Have looked for month for a slighty less bulky replacement and found nothing as warm.