In August 2008, a friend and I set off a three-day backcountry traverse of Chugach State Park. Our kit included some older gear (how can my back ever forget that 10-pound dome tent?) but it also had a few shiny new toys, chief among them a new Snow Peak canister stove. Compared to our ancient Coleman double-burner this thing was tiny, sleek, and had the BTU rating of a miniature jet engine. So imagine our surprise when we put a pot of water on the stove and waited… and waited… and nothing. After erecting a wall of rocks and gear around the stove we learned an important lesson about conventional, non-integrated canister stoves: they may be small and powerful on paper, but their performance is butchered by the breeze. This is also somewhat true of integrated but non-windproof stoves like the JetBoil, which use a heat exchanger but don’t protect the burner or exchanger from the wind. Given that we frequently cook in exposed locations in Alaska, a stove that doesn’t work in the wind is often simply a stove that doesn’t work.

Enter the MSR Windburner. The Windburner is a direct descendant of the 2.5-liter MSR Reactor, a large, heavier snow-melting-oriented stove with high wind resistance. Compared with the Reactor, the 1-liter Windburner is lighter, smaller, less expensive, less powerful (7,000 BTU/hr vs. 9,000 BTU/hr), and allows for more heat control. Add in consumer-friendly amenities like a cozy and cup, and it becomes clear that the Windburner is designed to compete with personal stove systems such as the JetBoil. But the Windburner distinguishes itself with an incredibly bold claim: that it is almost totally immune to wind. 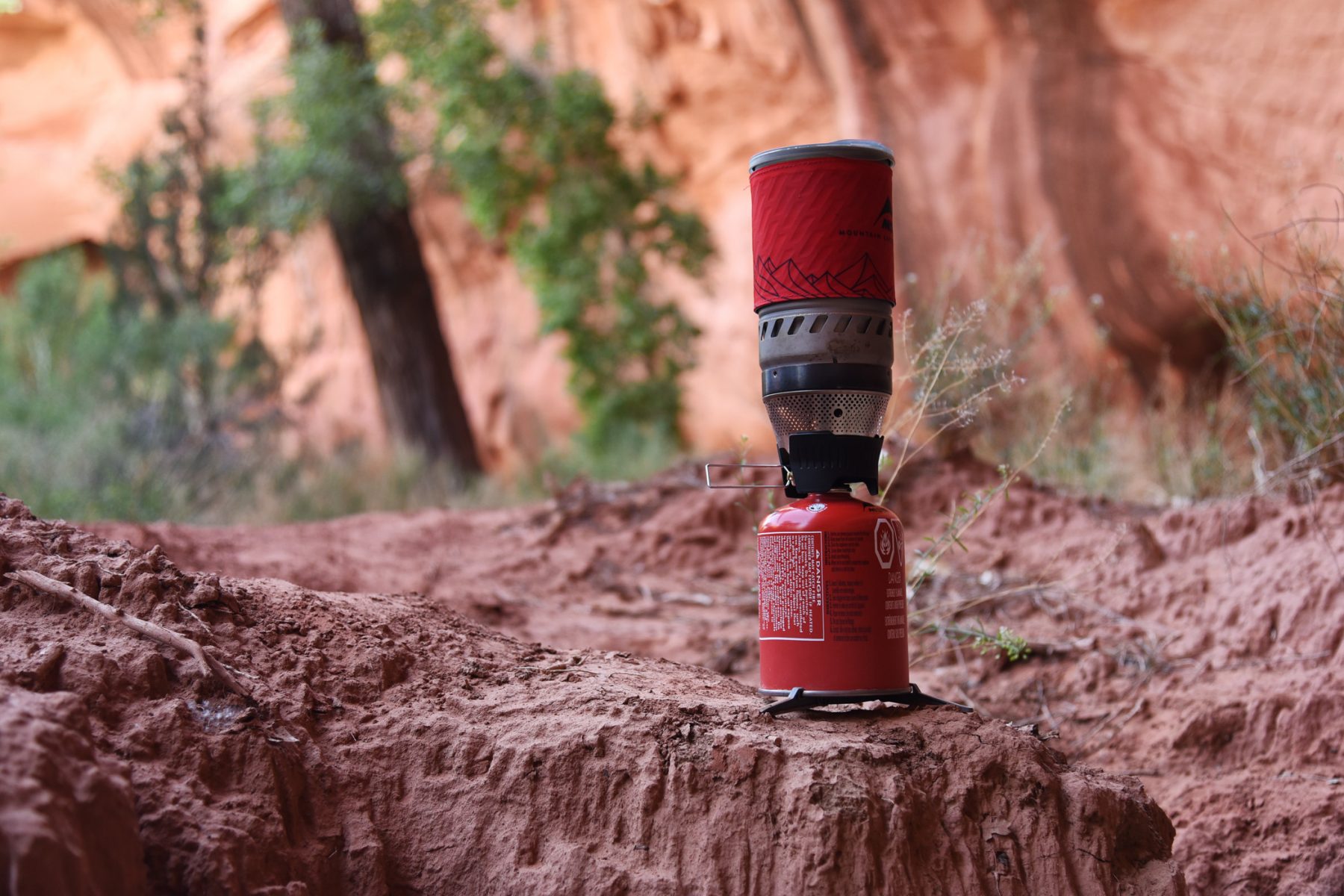 The MSR Windburner in Neon Canyon, during a 4-day packraft trip down the Escalante River.

To use the Windburner, attach a fuel canister, open the stove valve till you hear hissing gas, and light the stove with a match or lighter. The Windburner does not produce visible flames like non-integrated canister stoves but once lit it produces heat and the thin wire stretched across the burner will begin to glow. As soon as the stove is lit, quickly place the pot on the burner and rotate it a few degrees to lightly seat it in place. Ideally, fill the pot with water before placing it on the stove in order to prevent the metal from overheating. 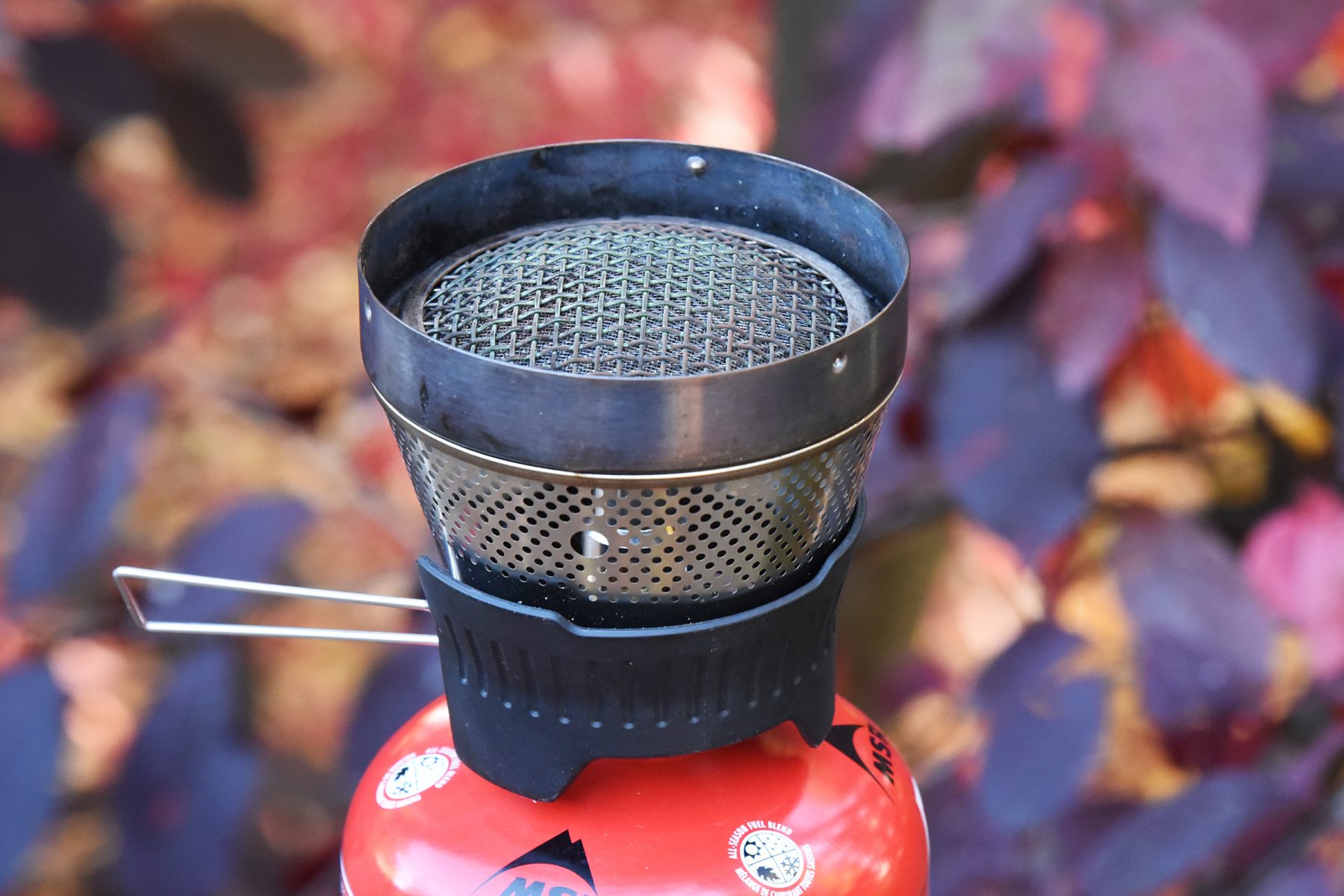 The burner on the MSR Windburner, showing a bit of green copper patina

The Windburner’s aluminum pot and heat exchanger are welded together. Once the pot is placed on the burner, the heating element is completely protected from the wind. Even at night, the stove produces very little visible light–a testament to its ability to conserve energy. The pot includes a tight-fitting plastic lid and attached plastic and fabric cozy to prevent heat loss. 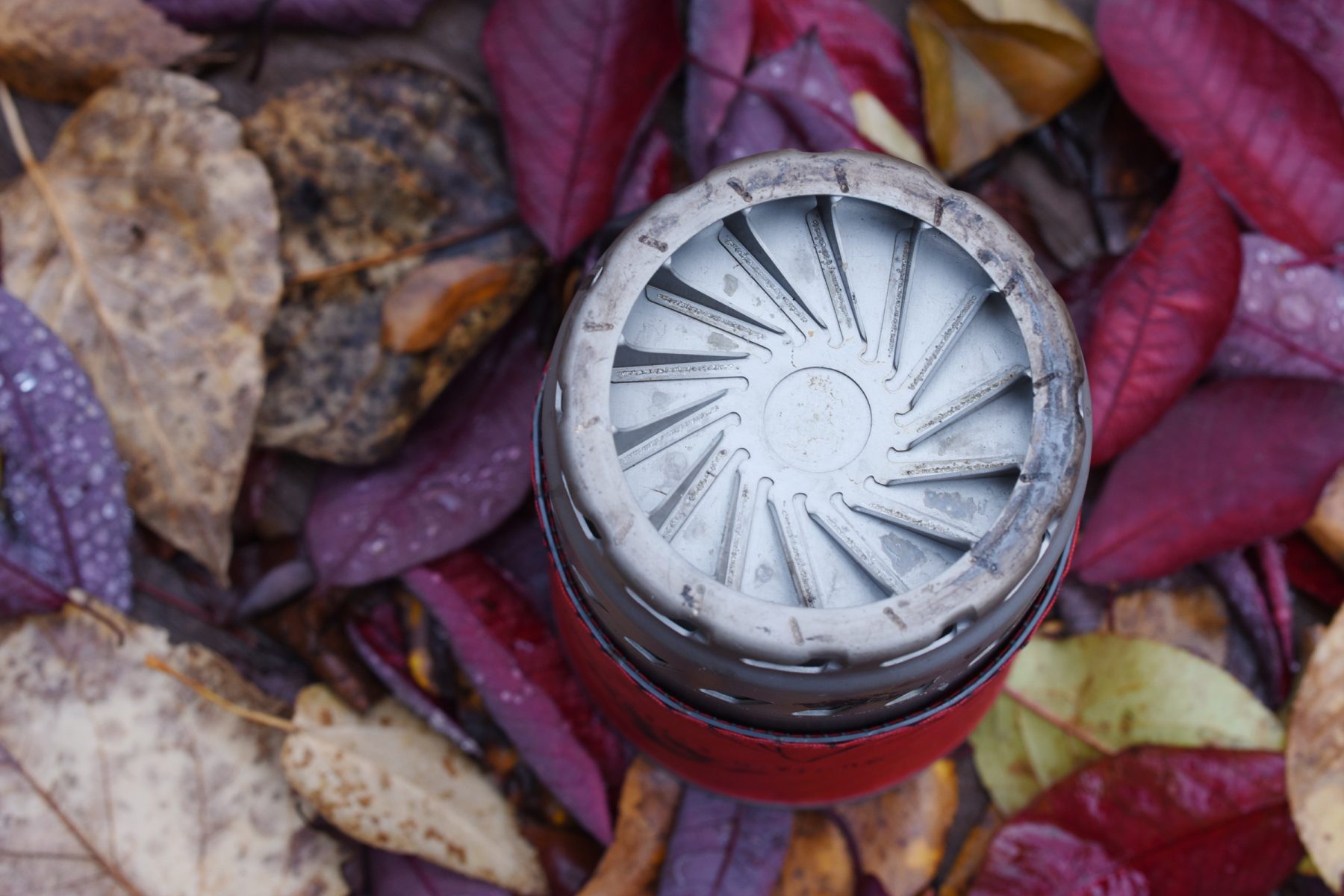 The Windburner includes a plastic tripod base that should be attached to the bottom of the fuel canister to increase stability. Optional accessories include a skillet that can be used instead of the pot, a hanging kit, larger 1.8-liter pot, and a French Press coffee kit for use with the standard pot.

Yes, it really works. I have used the Windburner year-round in Alaska, often in deliberately exposed campsites like the tops of peaks and crests of alpine ridges. The Windburner has never failed to rapidly bring water to a boil under any wind conditions. In the winter it quickly turns snow and ice to water, and water to boiling water.

At its highest setting, the Windburner brings water to a very rolling boil. It is best to fill the 1L container only about 2/3 of the way full to prevent boil-overs, especially if the lid is off.

The Windburner’s 1-liter pot is for boiling water and things very close to water (say, hot chocolate or miso soup). That’s it. Though the flame can be adjusted, it is still quite hot even on its lowest setting. Even foods with a high liquid content, such as soups or canned baked beans, require constant vigilance to cook without scorching. If you want to, say, cook up rosemary tenderloin while camped on a glacier you would be better-off with a non-integrated canister stove (and a heavy pan).

When the temperature drops below the boiling point of the liquefied gasses in the fuel canisters, canister stoves will no longer function. The exact temperature at which this occurs depends on the proportions of n-butane, isobutane, and propane in the canister. Though the Windburner can use canisters from any reputable company, MSR’s red “all-season” fuel canisters are considered among the best for winter camping because they contain a high proportion of propane, which has a very low boiling point (-44℉). I have used the Windburner with MSR’s all-season fuel at temperatures down to -8℉ without any apparent problems, though I would suggest that this is likely close to the fuel’s lower limit (without interventions like pre-warming the canisters or setting them in warm water). 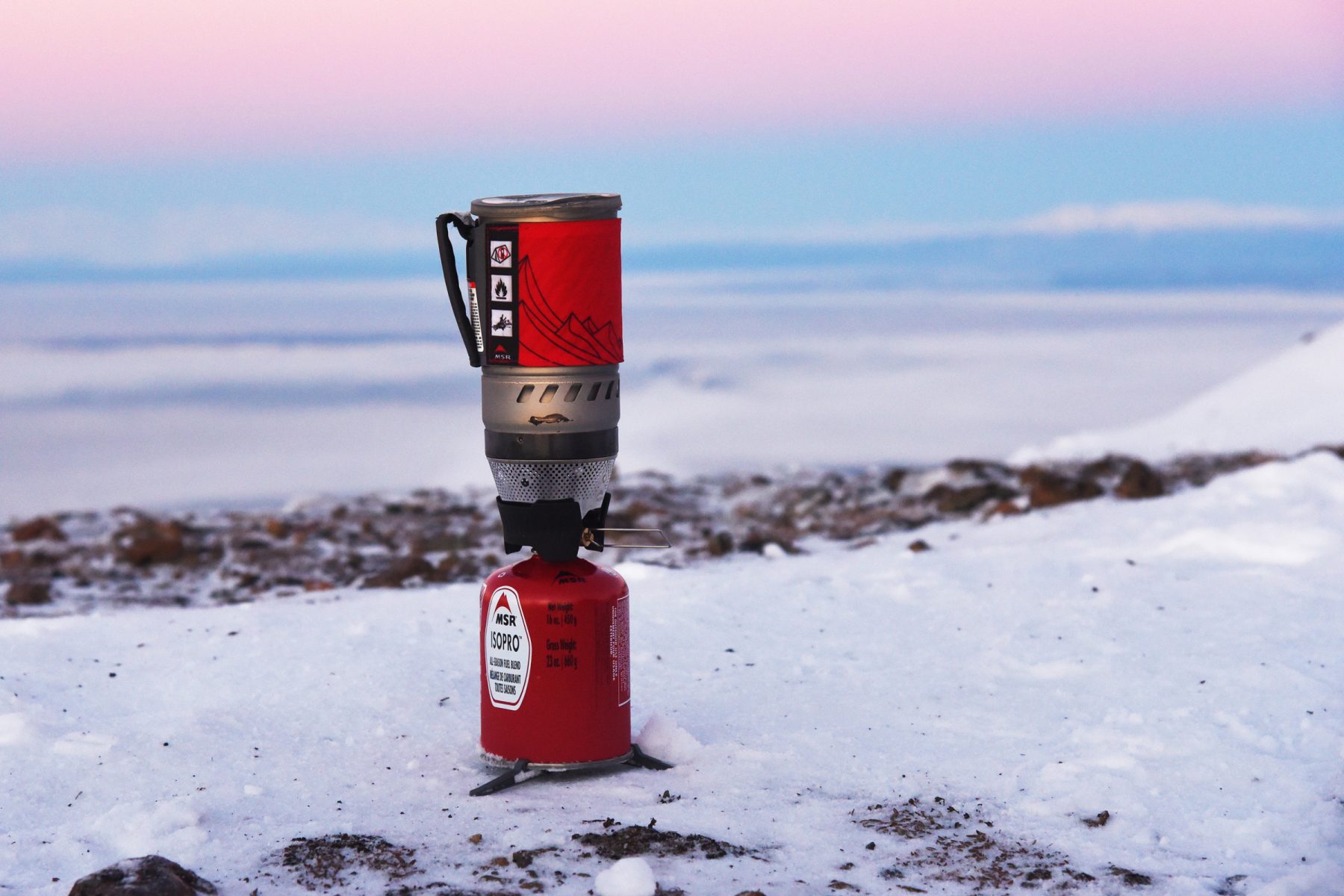 The Windburner includes a small three-legged canister stand, which greatly improves stability. Still, the Windburner is tall and top-heavy, and care must be taken to avoid bumping it and knocking it over. This downside is exacerbated somewhat in the 1.8-liter version, despite its larger tripod stand.

The light connection between the pot and burner will prevent the pot from tumbling off if it’s bumped lightly, but the whole assembly is not secure enough to allow the pot and burner to be lifted together. This is not a problem for those familiar with how to use the stove, but new users must be taught to un-seat the pot before lifting it.

The Windburner arguably represents an entirely new category of windproof backcountry stove, so perhaps the designers can be forgiven for not getting everything right. But it must be said that the stove does have its flaws. While I enjoyed using the plastic cup that fits onto the bottom of the stove and protects the heat exchanger while packed, it got jammed on so tightly that I had to cut it off with a pair of scissors to avoid risking damage to the pot. The plastic lid also deformed, and stopped fitting onto the top of the pot perfectly. 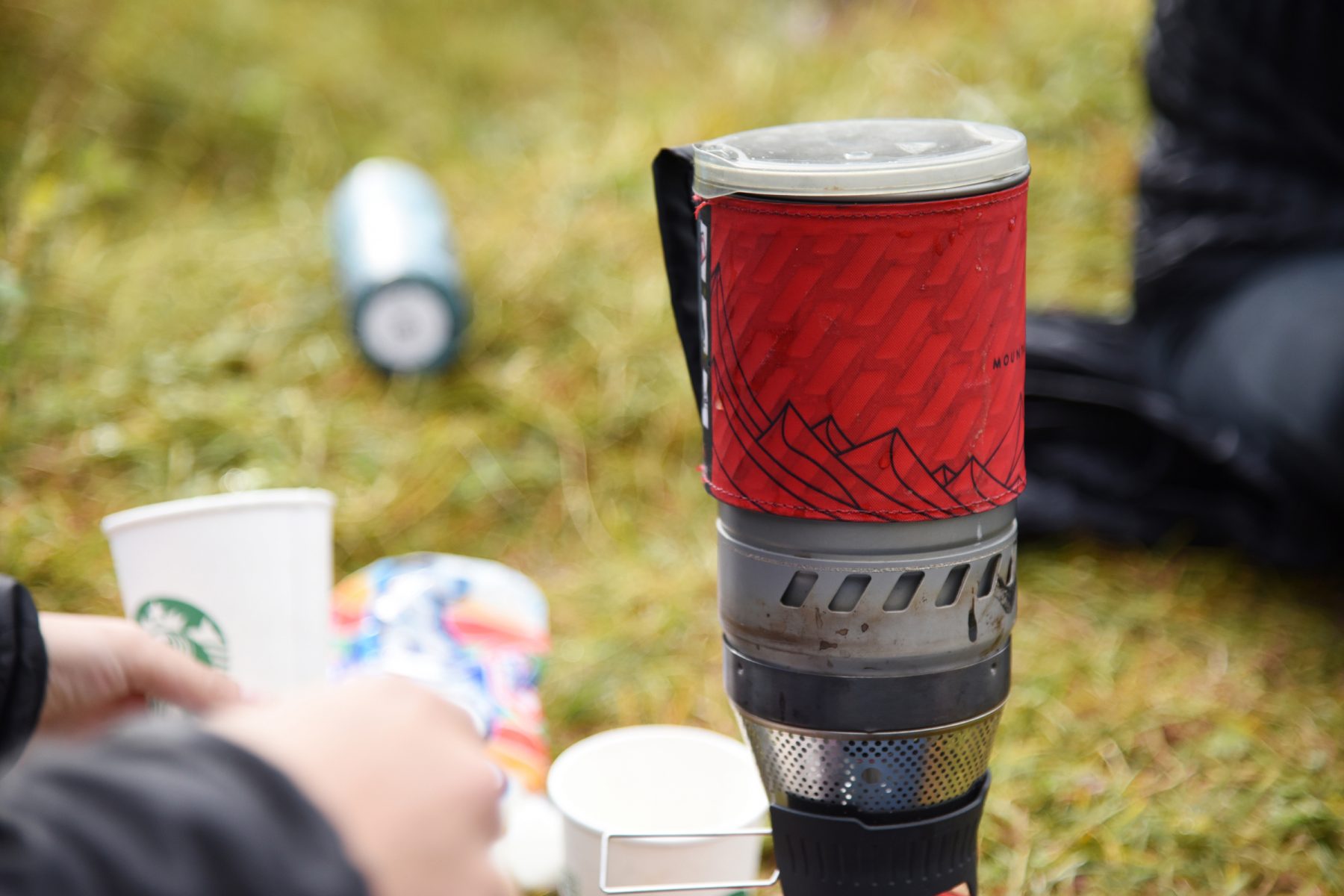 Cooking breakfast next to Gold Cord Lake, in Hatcher Pass. Note that the lid has deformed slightly and is not fully seated onto the pot. With the Windburner (or any pot with a lid, really) it is safest to ask people to set their cups or freeze-dried meals on the ground before pouring boiling water into them.

The cozy is attached to the pot with two light metal tabs. Unfortunately, over time one of these tabs on my stove weakened and then broke, leaving the cozy to slide off of the pot. 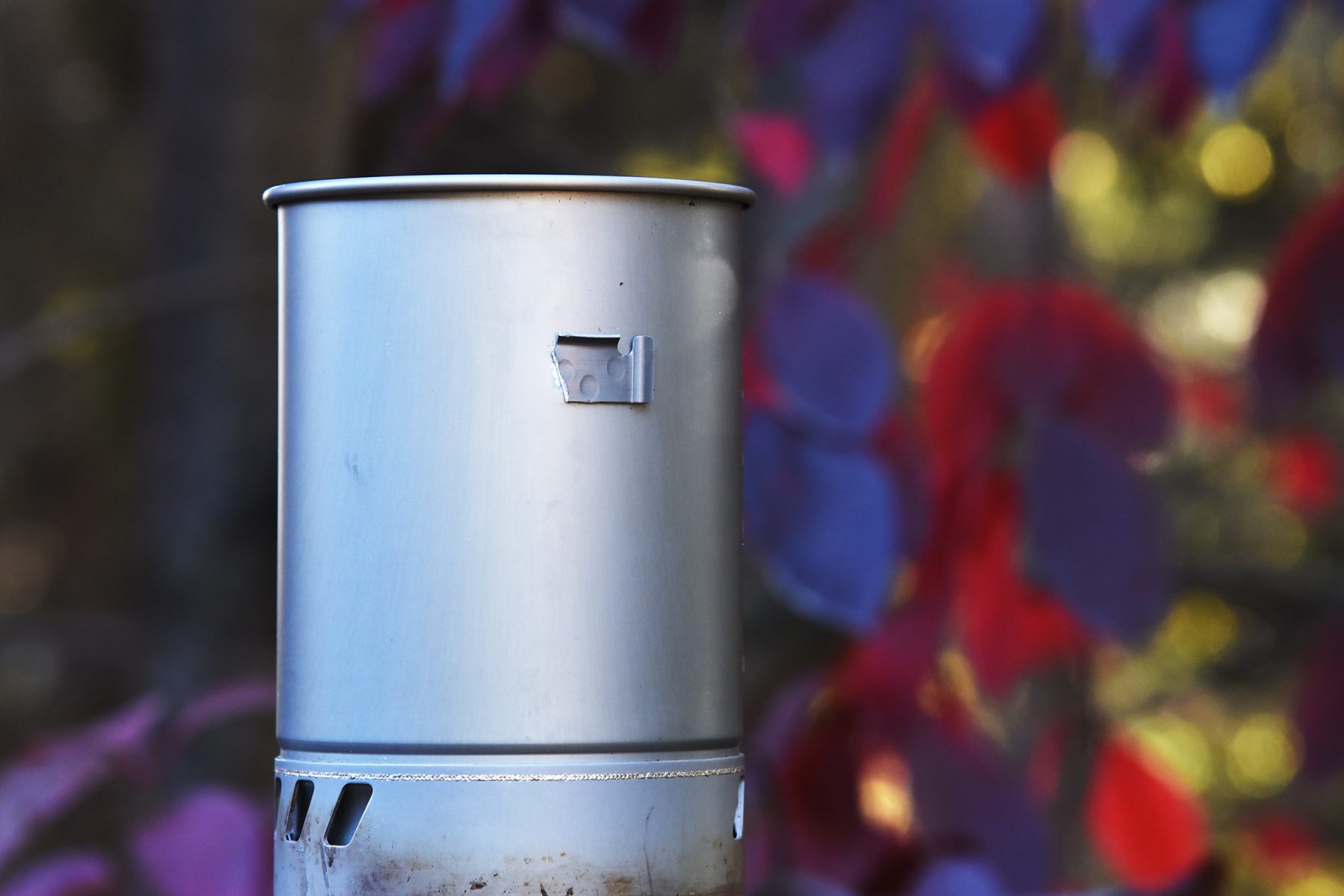 The side of the MSR Windburner pot, showing the broken cozy tab

When I called, MSR offered to replace or repair the pot, cozy, and cup at no charge, and replace the lid for a small fee. They didn’t even ask how long I’d owned the stove or whether I was the original purchaser (just under two years, and yes).

Credible sources report that the Windburner is among the most efficient stoves available today–even in calm, controlled “lab” conditions. In OutdoorGearLab’s stove test (which includes several models of JetBoils and non-integrated canister stoves), the Windburner came in first for efficiency. When you add wind into the equation, there’s no comparison: in the writeup of the Windburner on the obsessively thorough Adventures in Stoving blog, the author states “I did a variety of wind tests, and I have to say that the Windburner is head and shoulders above the competition in this regard. I couldn’t even get the Windburner to acknowledge that it was windy.”

The same general calculus also applies when comparing the Windburner to lighter integrated canister stoves like the JetBoil, which uses an efficient heat exchanger but which leaves its burner exposed to the wind.

The Windburner is widely available at both brick-and-mortar and online outdoor gear stores. The 1 liter version retails for $140, and according to pricing history on camelcamelcamel, can often be found for between $100 and $130.

At first glance, the name “Windburner” is a bit odd. Does the stove burn… wind? As it turns out, the stove was originally sold as the Windboiler before JetBoil flexed its legal muscle. Trademark issues aside, that original name really does dive right to the heart of this stove’s raison d’être: it boils water in the wind. And despite some design bugs, it delivers on this central promise just about perfectly.

For short camping trips in well-protected areas, or for “outdoor gourmet” cooking, a small, light non-integrated canister stove is great. In well-protected sites an integrated but non-windproof canister stove such as the JetBoil will provide excellent fuel efficiency. But for longer trips in exposed terrain the Windburner is king. It is fast, efficient, and reasonably light, and its ability to boil water in all wind conditions provides a degree of reliability and safety that is unmatched by its competitors.