The Bomber Traverse is an informal hut-to-hut wilderness backpacking route in the Talkeetna Mountains of Alaska. The purpose of the Bomber Traverse Map is to aid wilderness travel by indicating general backcountry routes and hut locations, by codifying locally-accepted names for peaks and other features, and by documenting rapid changes in glaciation. 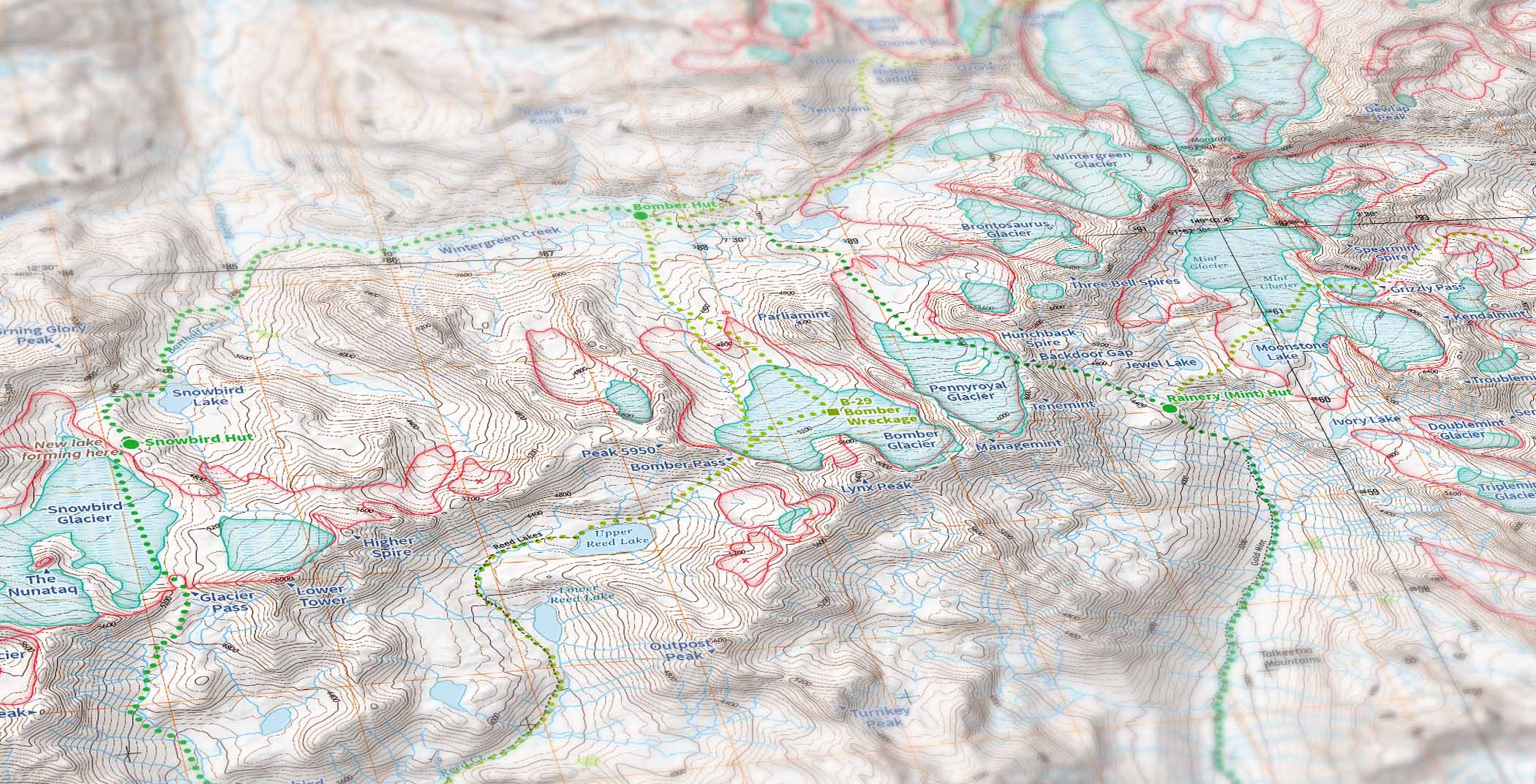 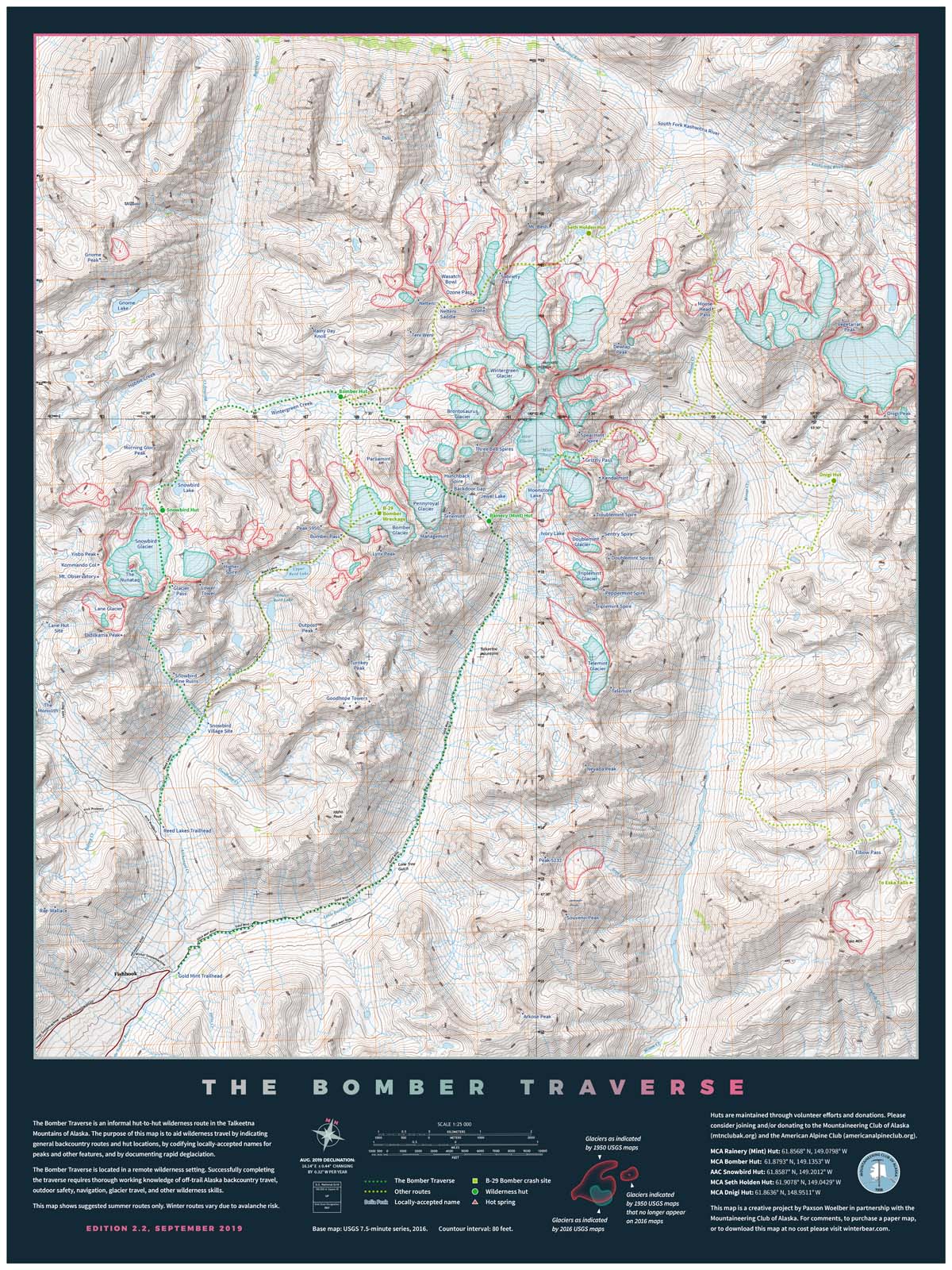 Get The Bomber Traverse Map

The Bomber Traverse Map will always be available for free under a Creative Commons CC BY-NC-ND 3.0 license. This means that you can copy, use and share the map at no cost, but cannot distribute alterations or sell it.

In August 2012, a group of four hikers–including myself–set out from the MCA Rainery (Mint) Hut to climb Backdoor Gap, cross Pennyroyal and Bomber Glaciers, and return to our cars via the Reed Lakes trail. We planned to cross a pass between the glaciers known as “Bomber in a Day Gap” because it allows a truncated version of the Bomber Traverse that shaves some time and distance from the full traverse. When we set out we expected a challenge: the Talkeetnas are riddled with loose rock, steep slopes and glacial ice. But we weren’t expecting our maps to lead us–literally–off a cliff.

We crossed Pennyroyal in a flurry of August snow, and scrambled to the top of the rocky pass leading to Bomber Glacier. On our USGS maps, this pass appeared to be a shallow ribbon of rock between the two sweeping masses of ice. But as we climbed down toward Bomber Glacier, the terrain rolled over more and more abruptly and we found ourselves threading steep, wet ledges of glacier-carved granite strewn with loose rock and slippery snow. 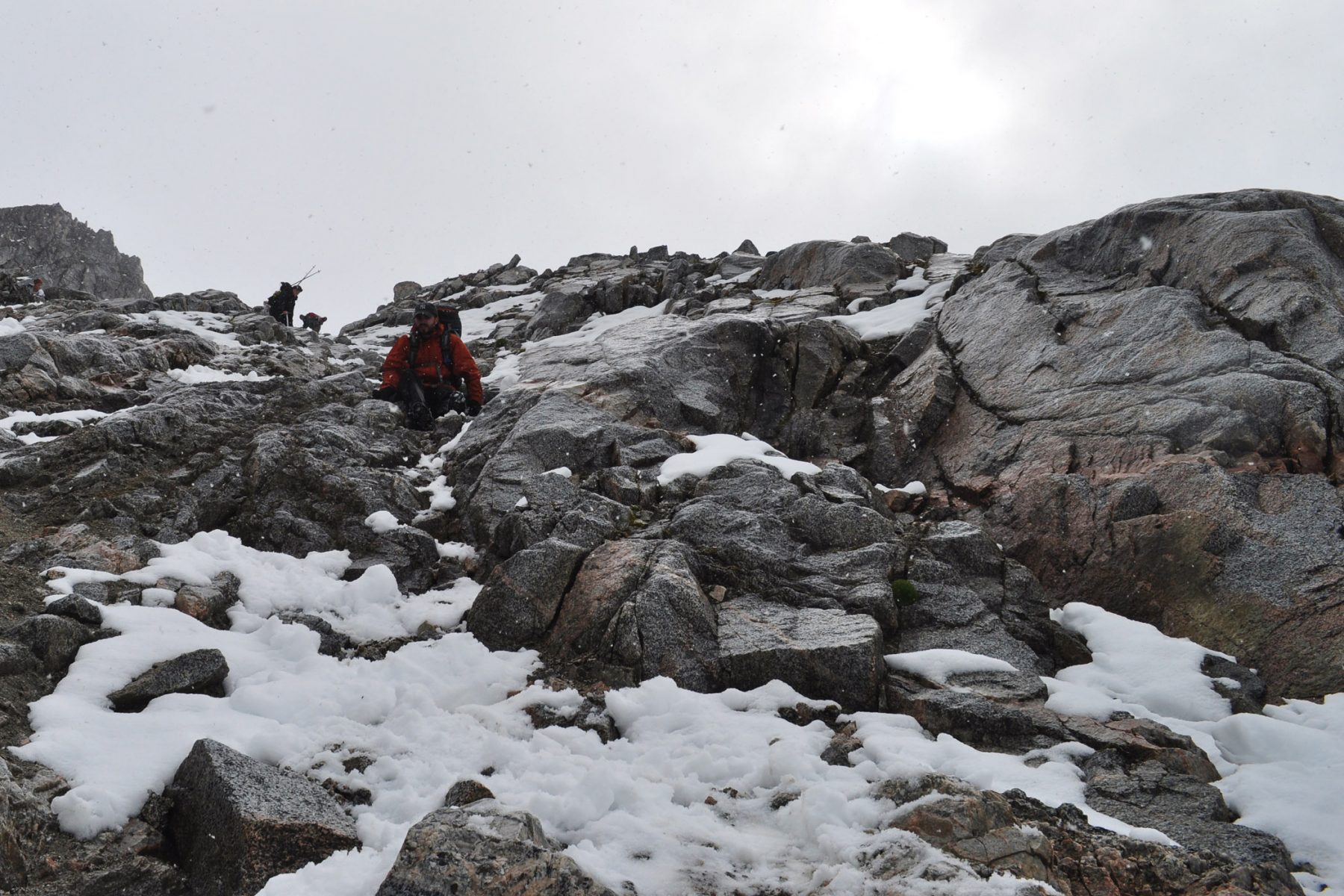 Just a few dozen feet above Bomber Glacier, one of our group slipped, tumbled down the rocky face, bounced over a deep randkluft (a crevasse-like feature formed when the top of a glacier melts away from the headwall behind it) and landed on the glacier. She was unhurt but shaken, and after we made sure everyone was safe we asked the unavoidable question:

Where the %&$#[email protected] did this cliff come from?

A look at the USGS maps and the surrounding terrain features quickly provided the answer: the glaciers had receded. A lot. The glacier we were standing on had lost about a third of its length since our maps were made, and at least a hundred feet of depth. The cliffs we had struggled down had always been there, but until recently they’d been hidden under glacial ice.

Glacial recession in the Talkeetna Mountains is more than a collection of abstract data points. Our experience in 2012 demonstrated that for Alaska outdoorspeople, deglaciation is a practical issue with major implications for safe travel.

The Bomber Traverse Map – The Basics

The current edition of the Bomber Traverse Map is made up of four merged quads of the 2016 USGS 7.5-minute maps, with hut locations, routes, place names, relief shading and glacial recession data overlaid onto them.

I used the 2016 USGS maps because their elevation data is generally more accurate than previous maps, and includes topographic changes caused by glacial recession. However, the 2016 maps provide their own challenges and frustrations: many lakes that had been included in older USGS maps are missing, as are many man-made landmarks such as old mine sites. And while the 2016 maps do contain more accurate representations of glaciers in their current states, they are already significantly outdated and some glaciers–such as the large, crevasse-riddled Wintergreen Glacier–are missing entirely.

The Bomber Traverse Map therefore attempts to improve upon the 2016 maps both by adding additional information and by correcting clear mistakes.

The topographic data (including glacier boundaries) compiled in the 1950s was used on USGS maps without apparent updates until at least 1994. Many online and device-based mapping apps continue to use this data as a base layer. The Bomber Traverse Map overlays the glacial boundaries recorded around 1950 onto the 2016 maps (and adds glaciers missing from the 2016 maps).

Example of glacial recession mapping. On the left is a 1950s USGS map, showing a 1.4-mile-long glacier between Triplemint Spire and Telemint. In the middle is the 2016 USGS map, indicating a much smaller glacier. On the right is Edition 2.1 of the Bomber Traverse Map. The Bomber Traverse Map overlays the glacier outline from the 1950s maps onto the 2016 map, emphasizes the boundary of the glacier on the 2016 map, and adds additional data.

Glaciers that appear on the 1950s maps but do not appear on the 2016 maps are marked with a red “X” to indicate that they have apparently disappeared.

Why not simply show the most accurate current glacial boundaries? Why indicate the historical extent of glaciers at all?

Understanding glacial change is helpful for backpackers much the way that knowing historical low-tide and high-tide water levels might be helpful for a boat captain. It allows backpackers to better avoid hazards, anticipate terrain, and navigate through a changing environment.

As we experienced on our hike over Bomber in a Day Gap in 2012, a glacier in recession is more likely to uncover challenging terrain that is not yet reflected on any maps. A cliff of only ten to twenty feet can create a significant hazard. Many glaciers in the Talkeetnas have lost at least ten times this much ice since the 1950s maps were published.

Recently glaciated terrain is often difficult to move through because it has not had time to settle and stabilize. This is true of moraines left at the retreating front edge of a glacier, but it is especially true of loose rock at a glacier’s headwall. In many glacial cirques in the Talkeetna Mountains, rock has fallen from mountainsides, piled up and fanned out onto the top of glaciers. Because the foundations for these rock piles are actively shrinking, they never have an opportunity to fully settle. One prominent example is the notoriously unstable rock fan on the northeast side of Bomber Pass, which rests on the top of Bomber Glacier.

Brett Frazer and Tim Treuer stand in the midst of a recently-glaciated valley below Montana Peak.

Receding glaciers have left behind many small lakes, moraines, and other features that may have implications for backcountry navigation. For example, no maps currently in use show the small lake forming off the nose of Snowbird Glacier, to the northwest of the Snowbird Hut. Knowing the rate of glacial recession gives a backpacker a better frame of reference when encountering unexpected terrain.

Last, and perhaps more importantly, considering deglaciation is an interesting and perhaps even obligatory exercise for people in the twenty-first century. I hope that the Bomber Traverse Map helps those both in and outside of the outdoor community conceptualize the effects of climate change and consider the power of our actions in the Anthropocene.

Only a few of the tallest peaks and drainages in the Talkeetna mountains carry “official” names recognized on USGS maps. But the mountains, lakes, and other land forms are too close to Alaska’s population centers and too heavily visited to remain nameless. Over the last several decades, local names for many land features have gained broad (if not totally unanimous) acceptance. Codifying place names aids logistics and improves safety for backcountry users.

To determine place names for the Bomber Traverse Map I referred to handwritten maps left at the Snowbird, Bomber and Rainey (Mint) Huts and to online and personal maps maintained by well-known Alaska outdoorspeople. When there was a conflict between maps, I reached out to map authors and consulted satellite imagery, USGS maps, and members of the outdoor community.

Some maps contained conflicting information that could not be reconciled. For example, the handwritten map at the Snowbird Hut put “Nevada Peak” north of Gnome Lake, where other maps put that name on another peak many miles away, just south of Telemint Glacier. The most common conflicts with names simply involve spelling. Take, for example, the prominent peak directly north of the Bomber Hut. Maps variously spelled the name of this peak “Neltura,” “Nalteni,” and “Nelteni.” According to several sources, this peak was named after the indigenous Dena’ina word for “Thunder”. I consulted a Dena’ina dictionary and found that “Nelteni” seems to be the correct spelling.

Determining place names requires judgment and discretion. Ultimately, the names we give places are arbitrary and imposed. Most peaks, valleys, and streams in the Talkeetna Mountains remain nameless, and in this vast and little-tracked wilderness area that seems appropriate. If you believe I have made an error or would like to make a suggestion for future editions of the Bomber Traverse Map, feel free to get in touch.

The Bomber Traverse is an informal, unofficial route through the Talkeetna Mountains wilderness. It is not a trail. The Traverse winds around cliff bands and over boulder fields, and crosses multiple glaciers with constantly-changing surface hazards. There is no single best way to complete the Traverse, and the optimal route changes with the conditions. Glacial recession will cause routes to change significantly over the coming decades.

The routes indicated on the Bomber Traverse Map are based on online research, personal experience, and GPS tracks from myself and others. I’ve tried to place the route on what I believe is the safest, easiest way through this wilderness area. However, users should always react to the conditions and rely on judgment in order to stay safe.

Note that the Bomber Traverse Map shows summer routes. Winter routes will be different, especially because they must consider avalanche risks. 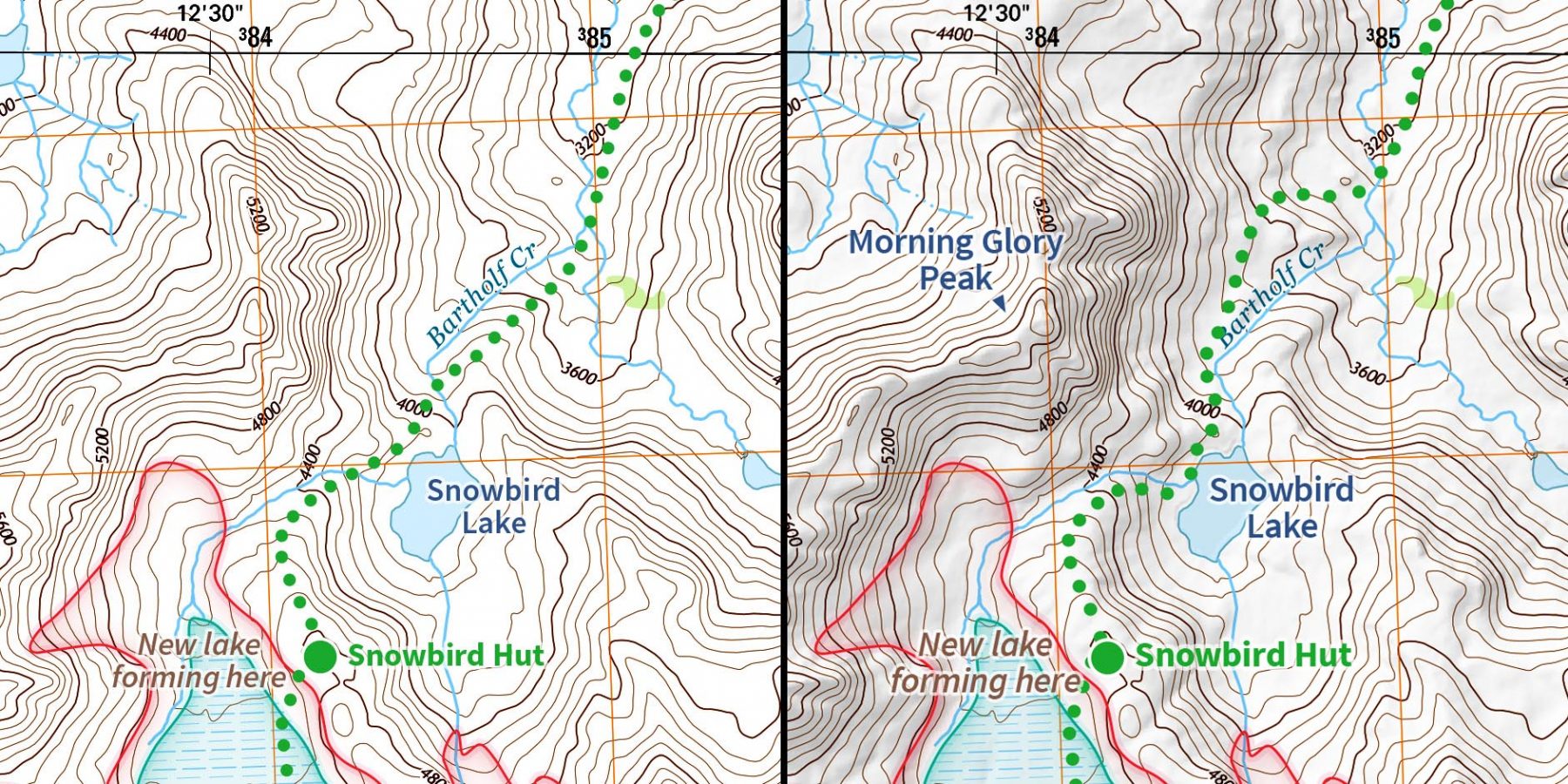 Route changes from the Bomber Traverse Map between editions 1.1 (left) and 2.1 (right). Starting with edition 1.2 I moved the route to avoid the steep, slippery cascade below Snowbird Glacier, and lead backpackers down the Bartholf Creek drainage on shallower terrain. These changes were made after a boots-on-the-ground trip in August 2017.

The Bomber Traverse Map includes markers and GPS coordinates for the Snowbird, Rainery (Mint), Bomber, Dnigi, and Seth Holden huts. Current information about the huts can be found on the American Alpine Club and Mountaineering Club of Alaska websites.

The Bomber Traverse huts are maintained entirely through volunteer efforts and donations. By law, all huts are open to the public. However, if you plan on using them, please donate or sign up for membership with the Mountaineering Club of Alaska and the American Alpine Club. Please treat the huts respectfully and clean them thoroughly when you leave so that they’re ready for the next group! 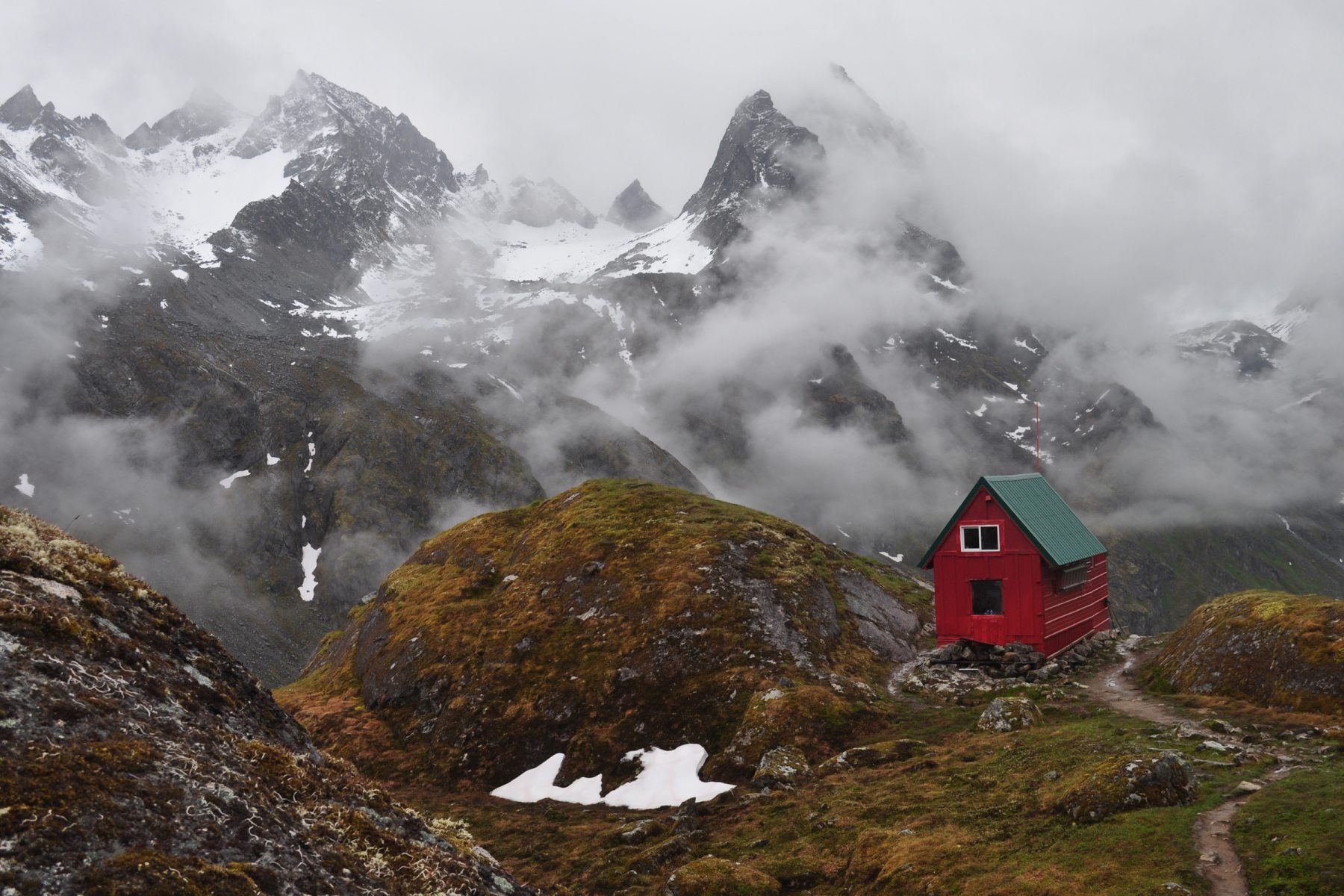 The Mint Hut, with Doublemint, Peppermint, and Triplemint Spires in the background. 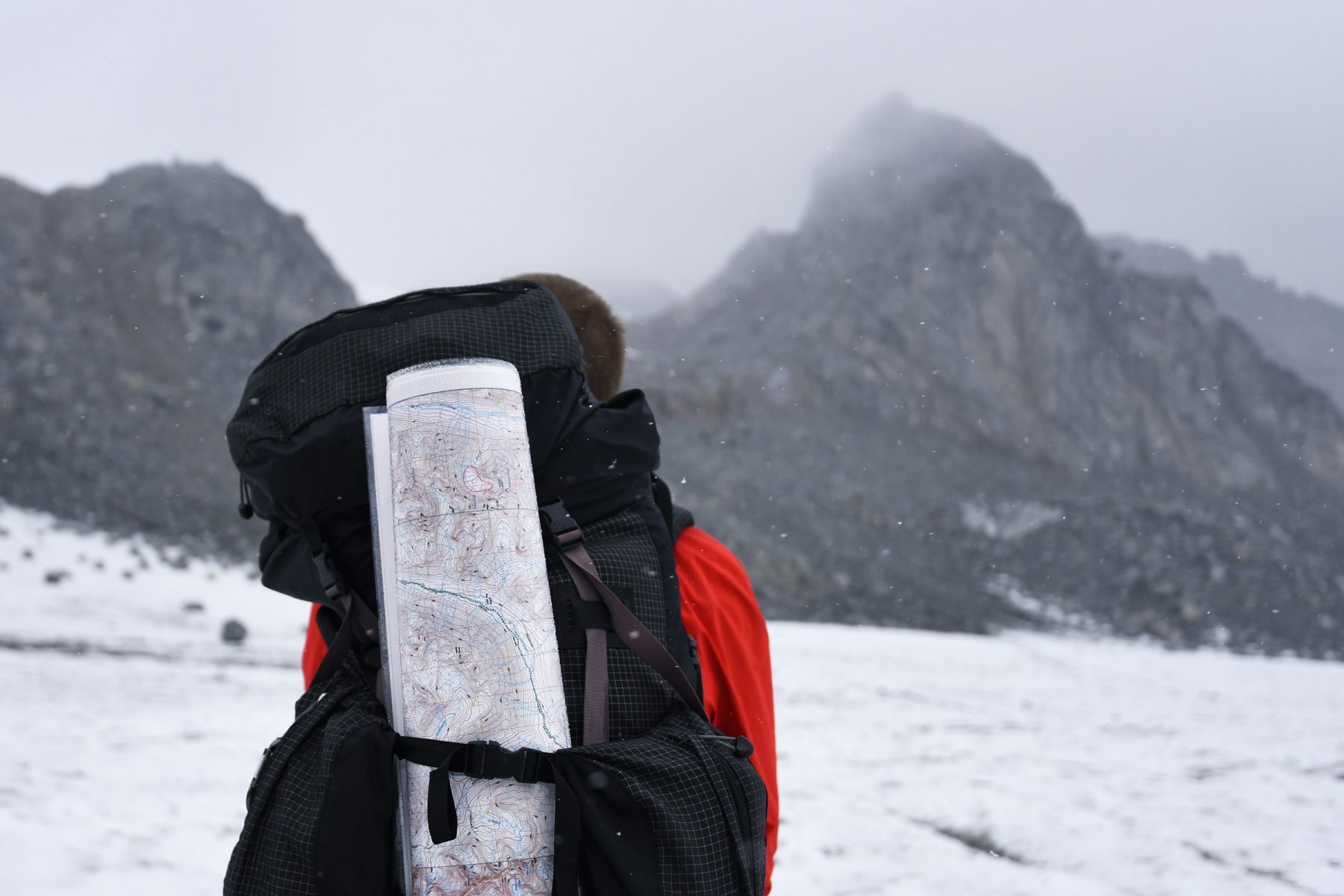 Notes on Mountain and Place Names