Gear can either be lashed on top of a packraft’s bow or stored inside the tubes. Internal storage lowers the boat’s center of gravity, improves sightlines over the bow, and keeps gear dry. However the airtight TiZip zippers currently used to access the internal storage chambers require careful maintenance and are failure-prone, and storing hard or heavy gear in the tubes increases the chance of a tube puncture. 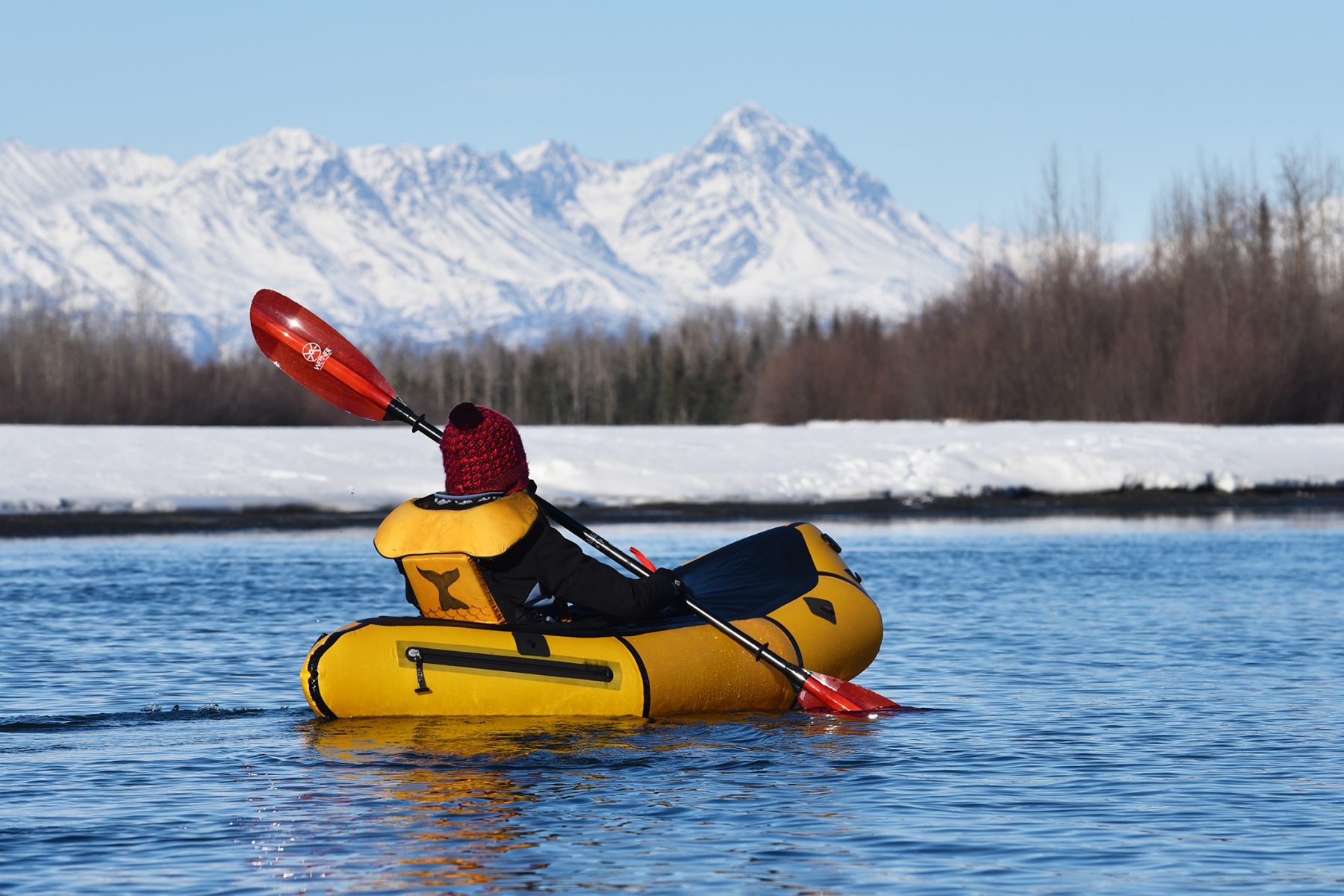 Paddling a Kokopelli Nirvana with internal gear storage. The black TiZip cargo zipper is visible on the rear tube.

Before the introduction of internal storage, packrafters almost always secured gear on top of the raft’s bow. This solution helps equalize weight distribution along a boat’s length, provides relatively easy access to gear, and allows for the transportation of large or strangely-sized gear such as bicycles or skis. Generally, gear is lashed to the bow with paracord run through the boat’s bow tiedowns, or with a simple proprietary system such as Alpacka’s “Packtach.” Gear that should not get wet must be protected with a rain cover, dry bag, or both.

While bow storage remains the only way to transport some large items, putting a significant amount of weight on a packraft’s bow does impact performance. The high center of gravity can cause bow twisting and instability on technical water, and gear piled on the bow diminishes a boater’s field of view. 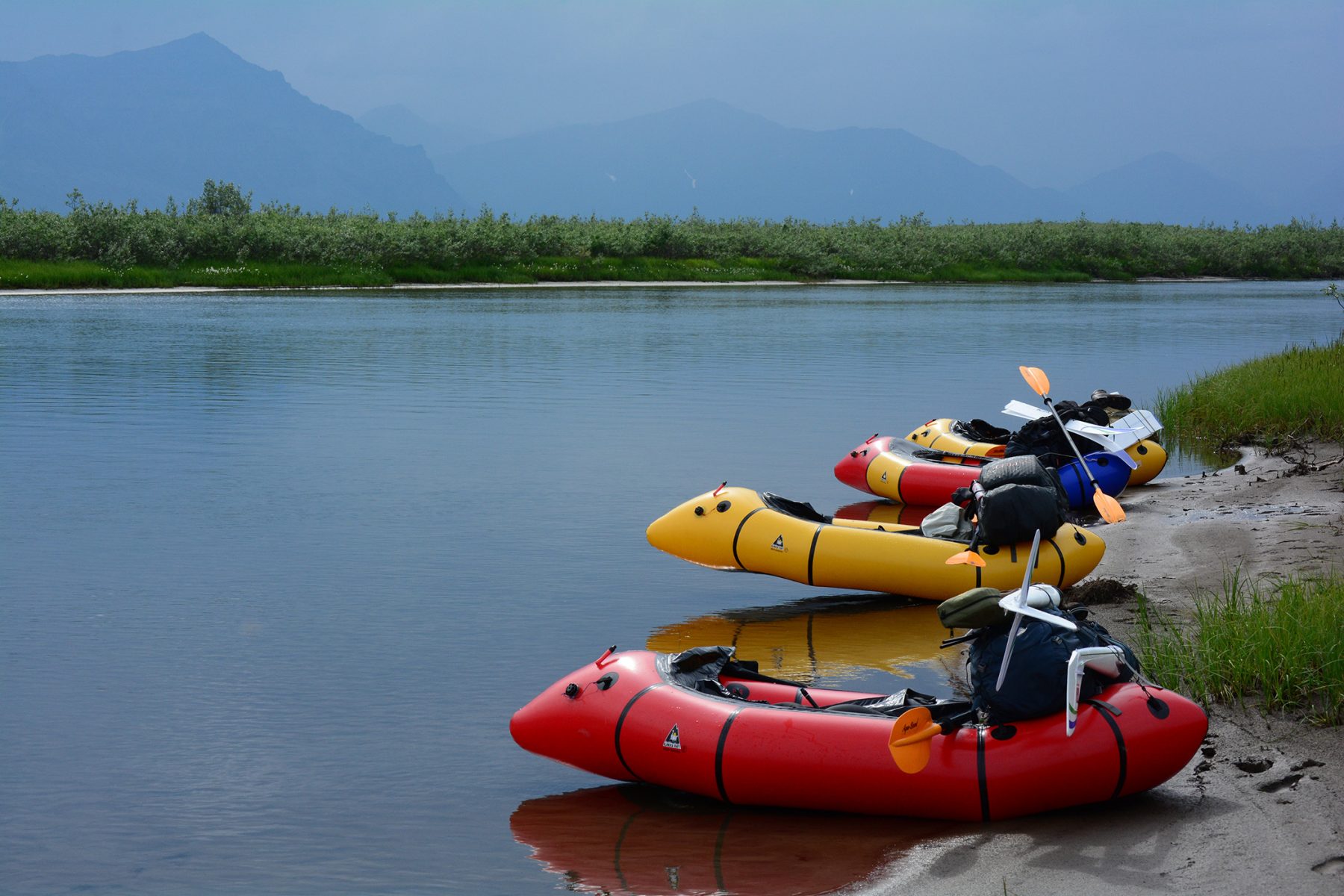 Packrafts with gear stored on their bows, on Alaska’s Anaktuvuk River

Around late 2012 Alpacka introduced an internal gear storage option for its packraft line. The basic concept that Alpacka pioneered has remained substantially the same since then, and has become widely adopted in the packraft industry.

To access the inside of the tubes, packrafts employ a single waterproof, airtight zipper, almost always located on the stern (the Kokopelli Renegade‘s bow zipper being a notable exception). Opening the zipper will cause the raft to rapidly deflate, and require that it be re-inflated once the boat is zipped up again.

As of this writing, all major packraft manufacturers use a TiZip zipper (a SuperSeal or some variant) from German manufacturer Titex. The TiZip zipper employs plastic teeth with sealing lips above and below the teeth. High pressure pushes the sealing lips together more tightly. Each zipper is factory-tested to maintain its seal at pressures far higher than those of an inflated packraft.

Some boats include ultralight internal dry bags, which are clipped to the inside of the tubes to keep them in place. Some boats simply include the zipper. While you could throw gear loose into any company’s packrafts, it is probably wise to always keep your gear inside an additional dry bag. Otherwise, a tube puncture could result in critical gear (sleeping bag, down jackets, etc.) becoming soaked.

The TiZip zipper adds a small amount of weight and bulk to the boat, and requires that it be folded up and stored more carefully in order to avoid excessively twisting the zipper.

TiZip zippers require fastidious care to seal properly. Silt, sand, and mud that makes its way between the teeth can keep them from connecting. Unfortunately the stiff zipper can act as a comb that brushes off and collects particles from dirty objects passed through it. Always pour some fresh water over the zipper before opening it, and try not to reach inside the tubes with dirty hands or arms. Make sure that any objects, especially bulky drybags, are brushed off (or even rinsed) before being put in the boat. TiZip recommends cleaning the zipper with soap and water if it becomes dirty. A soft toothbrush may be helpful to clear items stuck in the teeth. It may be helpful to soak the zipper and then forcefully blow the water out from the teeth. The zipper will need to be lubricated periodically in order to maintain the best seal.

TiZip zippers add several additional failure points to a boat. Air can leak from zippers in multiple locations, including between the teeth, through cracks in the zipper’s rubber housing, or out of the seam between the zipper housing and the packraft fabric. Zippers can fail catastrophically and for unclear reasons, in some cases requiring fairly dramatic field repairs. If a zipper fails catastrophically in the field, it may be necessary to glue the teeth shut, or patch over the entire length of the zipper. 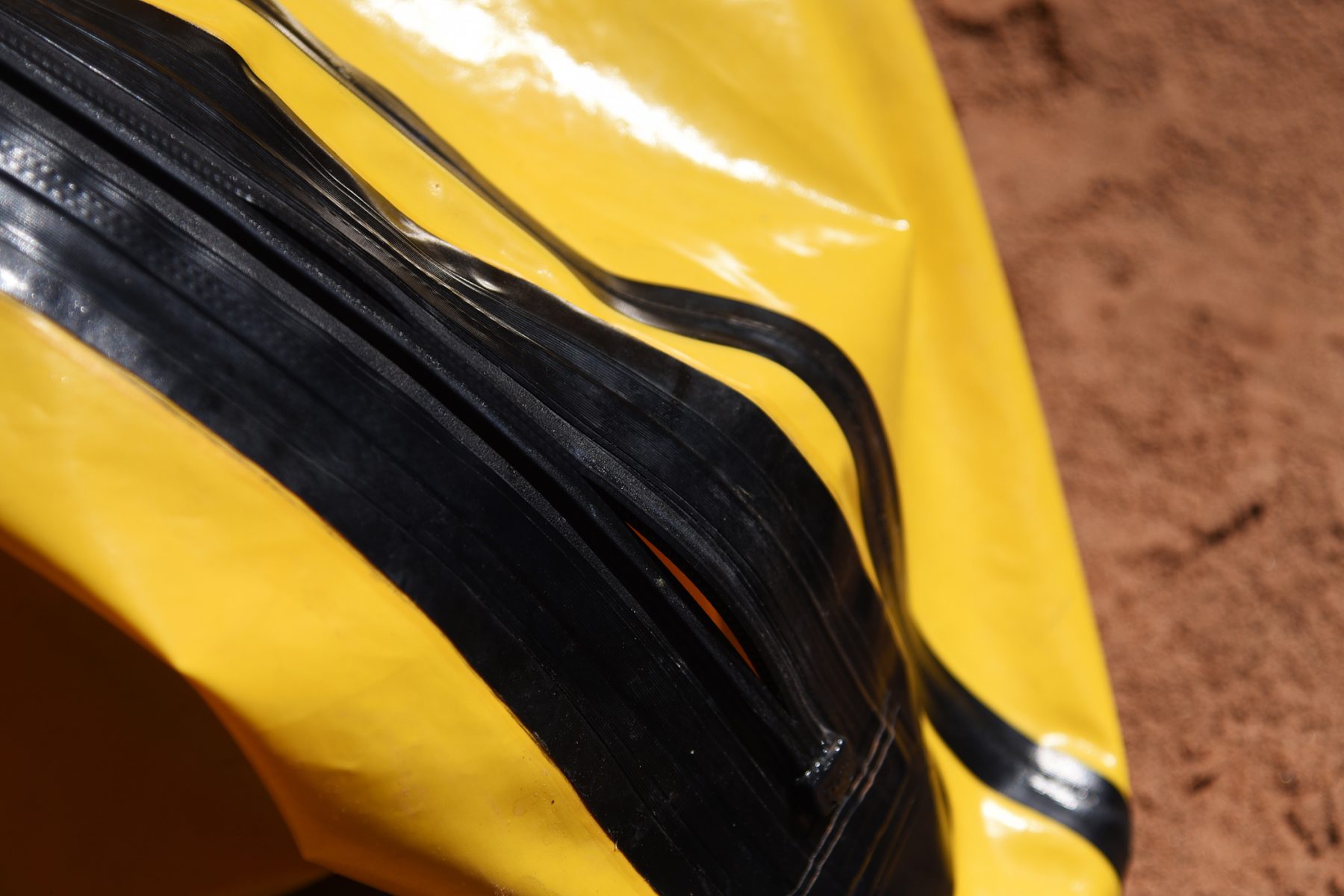 A new TiZip repeatedly failing to close during a trip on the sandy Escalante River. Zippers must be carefully maintained and cleaned in order to remain operable. Even then, they are frustratingly prone to failure.

Last, the truly dirty secret of internal gear storage: storing some types of gear in the tubes can significantly increase your chance of a puncture. When a packraft tube is empty, it can deform and “flow” around obstacles like submerged rocks and sticks. When hard or heavy objects are stored inside the tubes, the thin walls of a packraft can be pinched between objects on the inside and outside and tear. Prevent pinch punctures by putting soft and bulky objects (such as a sleeping bag, tent, and/or extra fleece) inside the tubes and hard, heavy objects (that bottle of 12-year Laphroaig, say) on your bow.

If you do put heavy items inside the tubes, wrap them inside soft, flexible items. Be especially careful when pulling an internally-loaded boat out of the water onto rocks or gravel. An internal storage system that holds stored items against the top and insides of the tubes, rather than the bottom, would probably prevent internal pinch punctures entirely, but to my knowledge no such system yet exists.

Best of Both Worlds

Most packrafters with an internal storage option will opt for a combination of bow and internal storage. Bulky but flexible items that probably won’t be used during the day, such as camping and sleeping gear, are perfect candidates for storing inside the tubes. Some inflexible items, such as overnight backpacks and bicycle parts, may be too large to fit through the zipper and will need to be lashed to the bow. Because opening the zipper releases the air in the tubes and requires the boat to be reinflated, it is often more convenient to store some day-use items like additional layers or snacks on the bow inside a dry bag. If you only need to store a few items on the bow, consider buying or making a bow bag.

Small items (such as camera or snack bags) can be carried loose on your lap, attached to webbing behind your seat (depending on boat fit), kept inside a bow bag, or lashed to a bow bag or bow straps. In general, avoid lashing small items in your packraft cockpit because they can inhibit your movement or cause an entanglement hazard if you capsize. 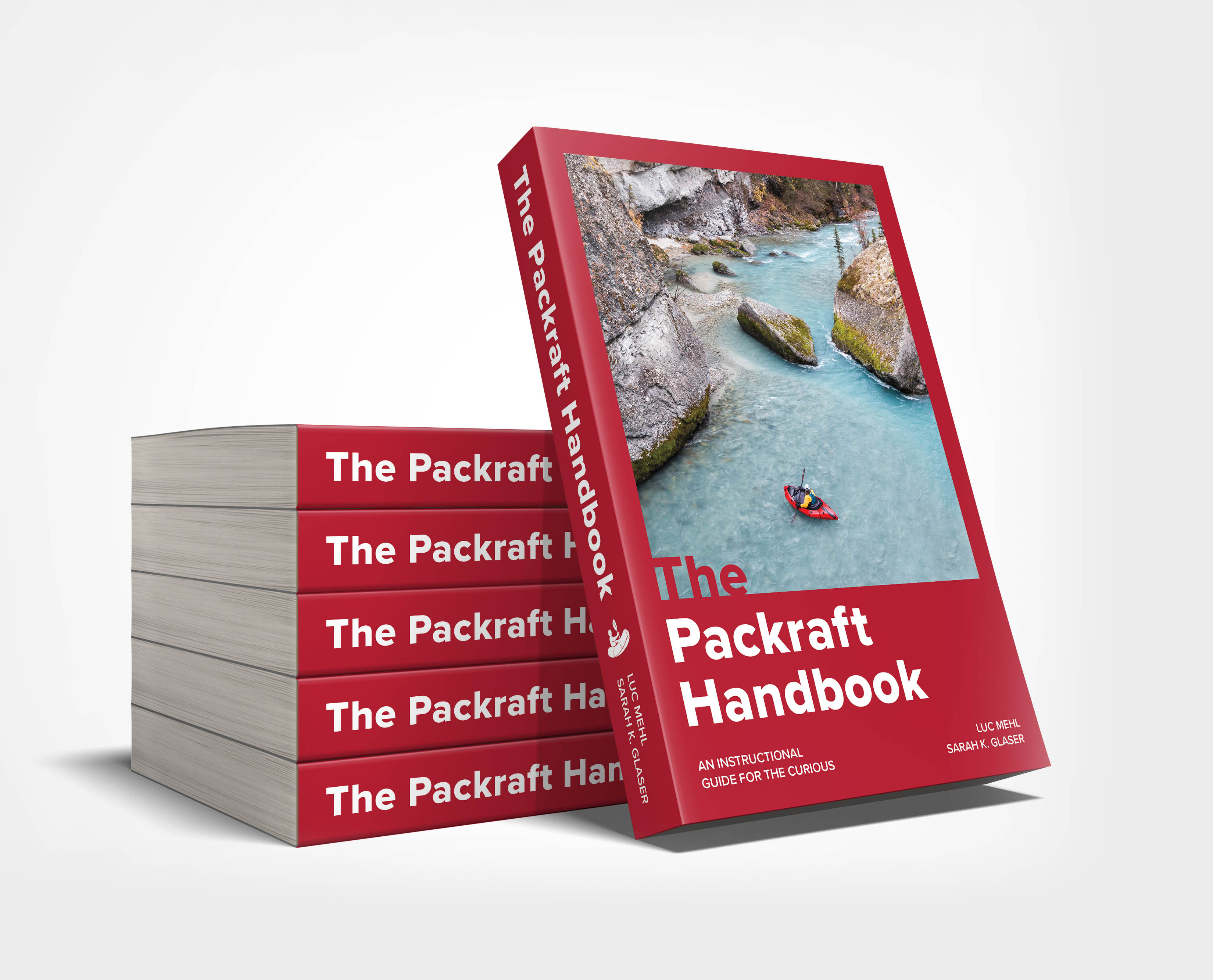