The Talkeetna Mountains of Alaska are a maze of lush alpine valleys, old mining roads, and black-stained granite walls enfolding the remnants of dying glaciers. Moose, bears, and herds of caribou wander the tundra through nearly-everpresent fog, clouds, and occasional flurries of summer snow that leave the craggy peaks with shining white crowns. Even the most irreverent outdoorspeople come out of the Talkeetnas murmuring about their time in “God’s country.”

Though these mountains offer incomparable wildness, they are also remarkably accessible and offer walking/hiking options for folks of all abilities. The Gold Cord Lake Trail begins close to the parking lot at Independence Mine State Historical Park, meanders across a tundra valley, and then switchbacks up to a jewel-blue tarn perched on the edge of a glacial cirque. At less than one mile each way, this well-developed trail is far easier than other popular Alaska alpine hikes like Flattop or the nearby Reed Lakes Trail. It is suitable for sure-footed hikers of nearly any age and ability level, including children. 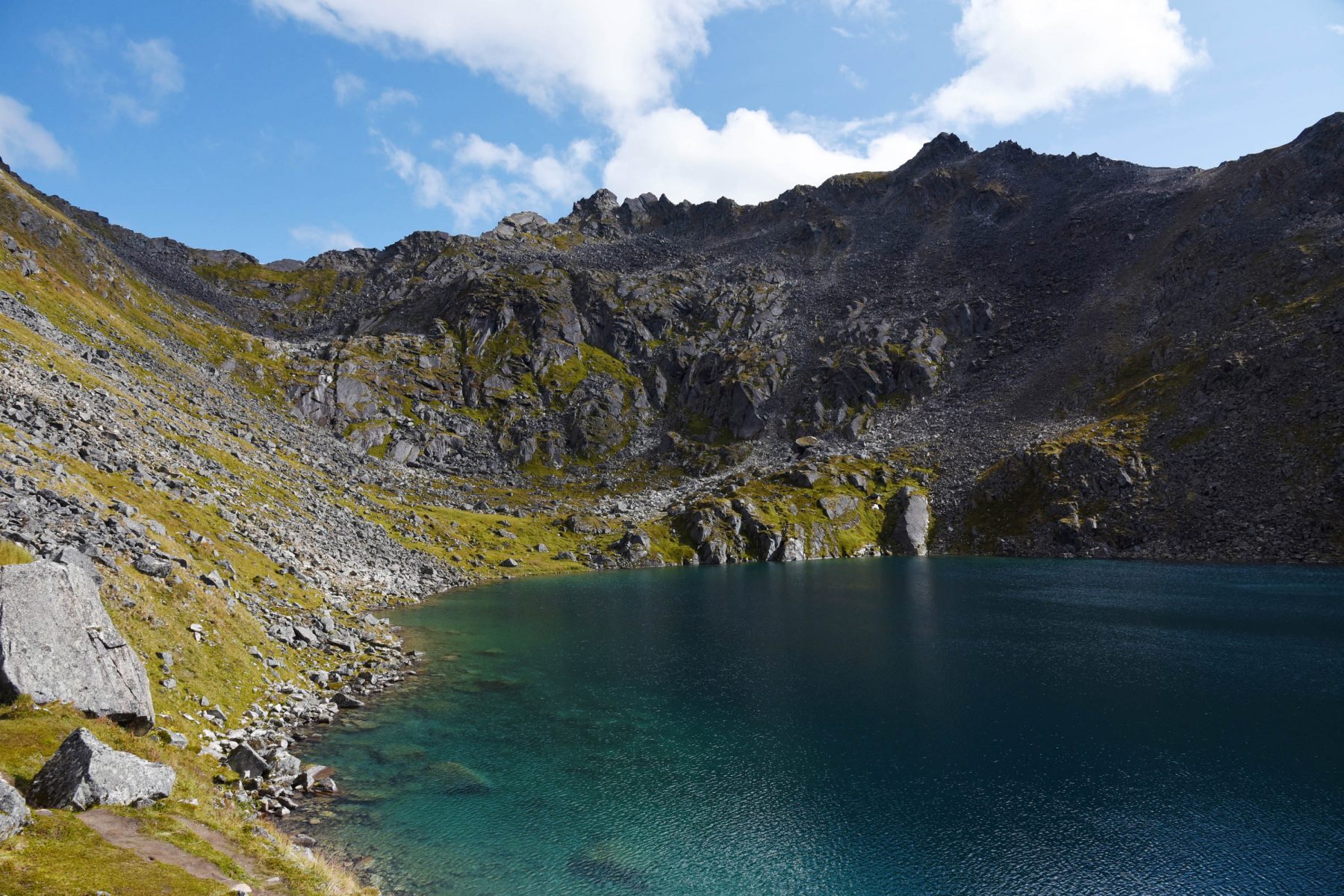 Gold Cord Lake, in the Talkeetna Mountains of Alaska

Note: Despite its popularity, there is a lot of misinformation about the Gold Cord Lake Trail online. Some websites list incorrect distances and elevation gain. The topographic maps on two popular websites show the wrong trail, leading to a different lake. The information here is complied from GPS tracks, State Parks sources, and my personal experiences on the trail. 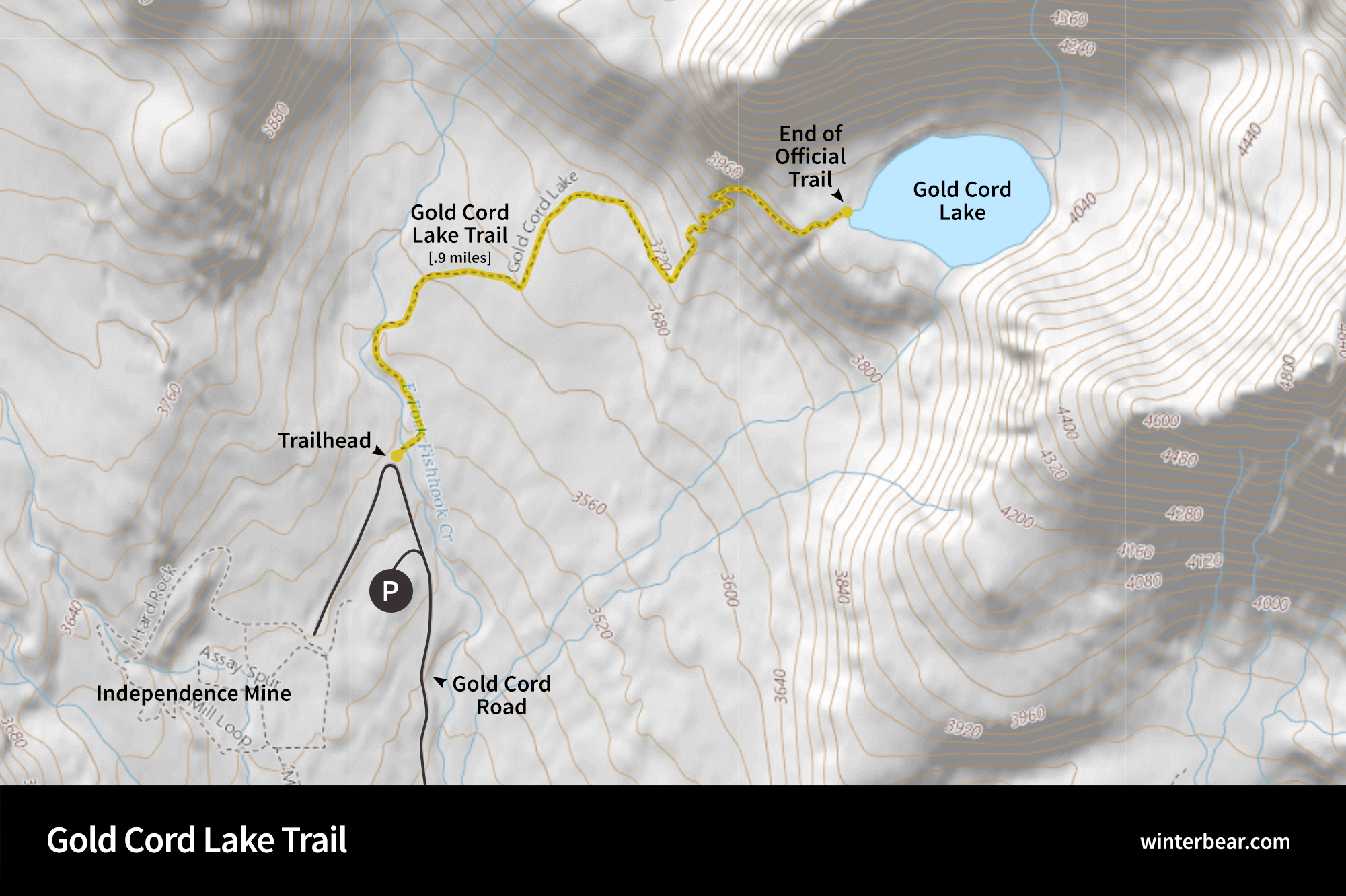 The Hatcher Pass area is one of the most popular destinations in the state for skiing and snowmachining, and just a couple drainages away from Independence Mine the valleys are topped with glaciers and year-round snowfields. A lot of snow falls here, and it can take a while to melt out in the spring. Good hiking conditions tend to occur between early June and the first significant winter snowfall, which generally occurs between late September and early November. Because the trail is almost entirely visible from the road, it is usually possible to assess conditions before you begin the hike. To gather information outside of Alaska, call the Alaska DNR’s Mat-Su office or the Independence Mine State Historical Park Visitor Center. Anyone working at the Visitor Center should be able to give you a trail report just by looking out the window.

Independence Mine State Historical Park sits on the edge of a vast wilderness area in which large four-legged mammals vastly outnumber people. That said, there is enough human activity around the Mine and busy Gold Cord trail to discourage many big mammals from making an appearance. Moose generally prefer lower elevations but may occasionally pass through. Make sure to give them a wide berth, especially if they seem agitated. Black and grizzly bears are a rare sight here but it would be good to familiarize yourself with bear safety basics and consider carrying bear spray, especially if hiking alone. Caribou sightings have been reported around Independence Mine, but the chance of seeing any from the Gold Cord Lake Trail is very low. Hikers are most likely to encounter many small mammals including ground squirrels and fat marmots (often called “whistle pigs” due to their shrill cry and chubby appearance). Hawks and eagles can often be spotted wheeling through thermals overhead. 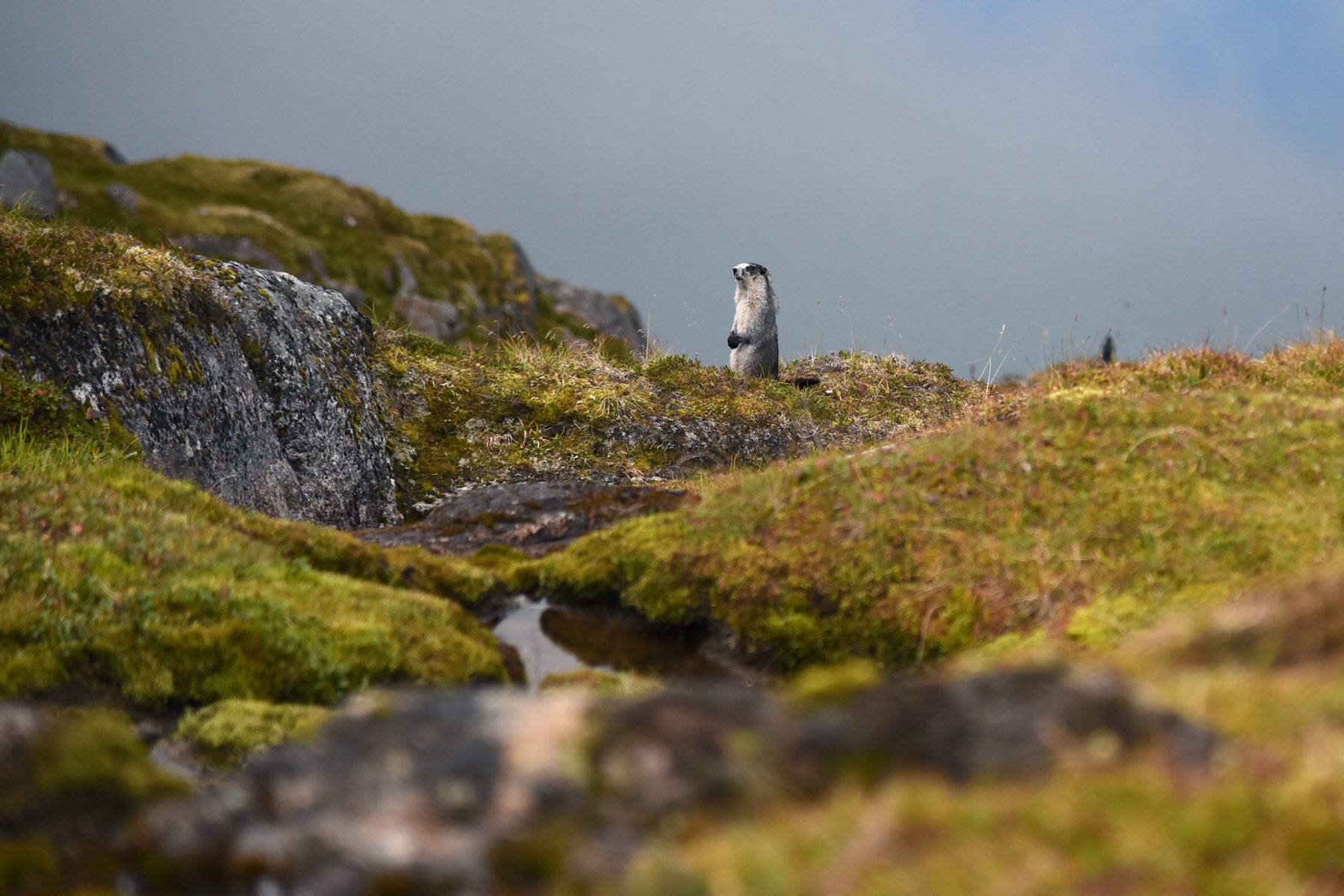 The trailhead for the Gold Cord Lake Trail is located in historic Independence Mine State Historical Park, a one hour and fifteen-minute drive from downtown Anchorage. The fastest route from Anchorage starts on the Glenn Highway, briefly jumps onto the Parks Highway, then follows Trunk Road to Fishhook-Willow Rd. A 5-minute-longer route (Parks Highway to Trunk Road to Fishook-Willow) runs through the small town of Palmer.

High in the mountains Fishhook-Willow Rd. forks near the Hatcher Pass Lodge; the seasonal portion of the Fishook-Willow Rd. continues west over the mountains and Gold Cord Rd. immediately enters Independence Mine State Historical Park. The park is only open during the day and only in the summer, and entry costs $5. Those who don’t want to pay the entrance fee or who plan on leaving after the gate closes should park at the large lot by the entrance and continue up the road on foot. The trailhead for the Gold Cord Lake Trail is located one mile up the park road, across the street and directly north of a large parking lot.

The first section of the Gold Cord Trail crosses a small bridge over gurgling East Fork Fishhook Creek and meanders across relatively flat tundra. The trail can be wet here due to rain or snowmelt, but otherwise it is excellent and all but impossible to lose. Stay on the trail: park staff are trying to restore trampled vegetation on side trails, and there is private property nearby.

The trail climbs slowly to a bench, on which is perched the historic Lynch Cabin. Roy Lynch built this wood, sod and metal structure circa 1930 to house himself and his family while working at Independence Mine.

Above the Lynch Cabin, the Gold Cord Lake Trail switchbacks steadily to the lake. Though footing may occasionally be iffy, the trail itself is clear and there are even stone stairs across some of the boulder fields. 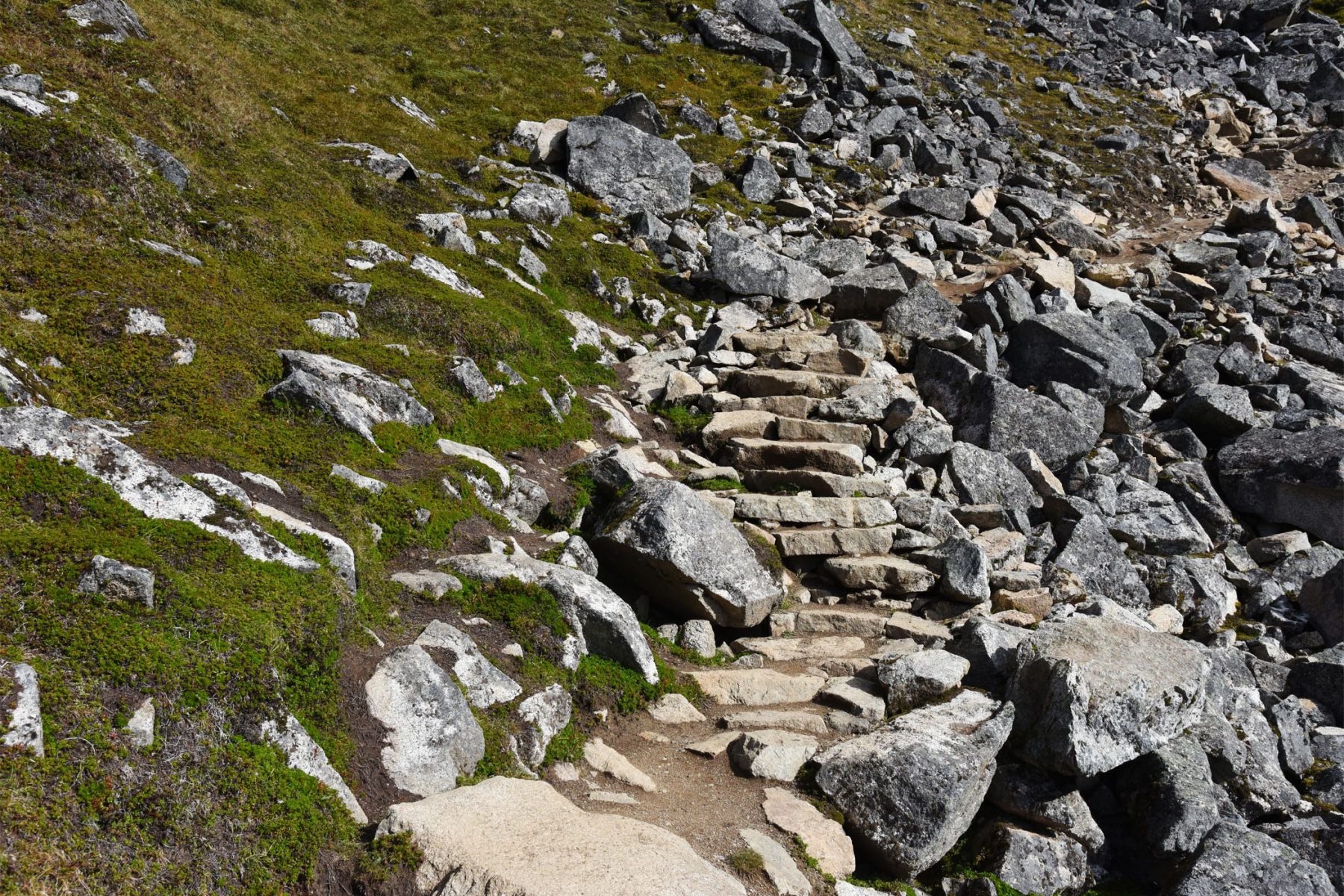 Stairs are a rare luxury on Alaska trails

Gold Cord Lake is located right on the lip of the glacial cirque above the Lynch Cabin. There are many boulders to climb and lie on, and perfect lunch spots abound. Many are tempted to dip a toe into the tropical-blue water of Gold Cord Lake, but be forewarned that this alpine tarn often has surface ice well into June and the water is rarely anything but ice-cold.

Just because the official trail stops at the southwest corner of the lake doesn’t mean you have to. If you’d like to stay low, follow the path about a half-mile long around the edge of the lake. It starts out very well-defined on the north side of the lake but quickly fades when it reaches the first boulders. Be prepared for a bit of routefinding and using your hands as you traverse the boulder fields. If you’d like to earn a view, consider the one-mile (round trip) hike around the north side of the lake and up boulder-strewn tundra benches to the 4,500-foot pass directly northeast of the lake. This off-trail route involves more scrambling and routefinding, but the panorama of craggy Talkeetnas mountains visible from the pass is much more dramatic than the view back toward Independence Mine. If you head off-trail, make sure you are prepared and that other people know your plans. In the early season (which sometimes means through June), be mindful of avalanche danger from the steep slopes on either side of the lake.

Thank you for your wonderful account of Gold Cord Trail at Hatchers Pass. We’re going tomorrow! You made it sound so wonderful! We are doing a “staycation” this year and enjoying our beautiful Alaska. You are a great writer! Happy trails!