From a technical standpoint Wolverine Peak may be the easiest summit in the front range of the Chugach. While even Flattop has a short section of light scrambling at the very top, the standard route up Wolverine is entirely Class 2 hiking. This relative ease doesn’t mean that Wolverine isn’t a worthwhile destination, though. Once above treeline, the trail has an unobstructed view of the entire Anchorage bowl and across the inlet to the Aleutian and Alaska ranges. The view off the back, toward the crags and cliffs of Mt. Eliot and Williwaw, is just as impressive. Though Wolverine is a perfect first peak for Chugach Mountain rookies, it also has plenty to offer for those looking to explore, including creative options for threading together various trails, ridges, and adjacent points to make side trips or scrambly backcountry loops. Depending on conditions, Wolverine can also be a good introduction to winter peak-bagging for experienced hikers. 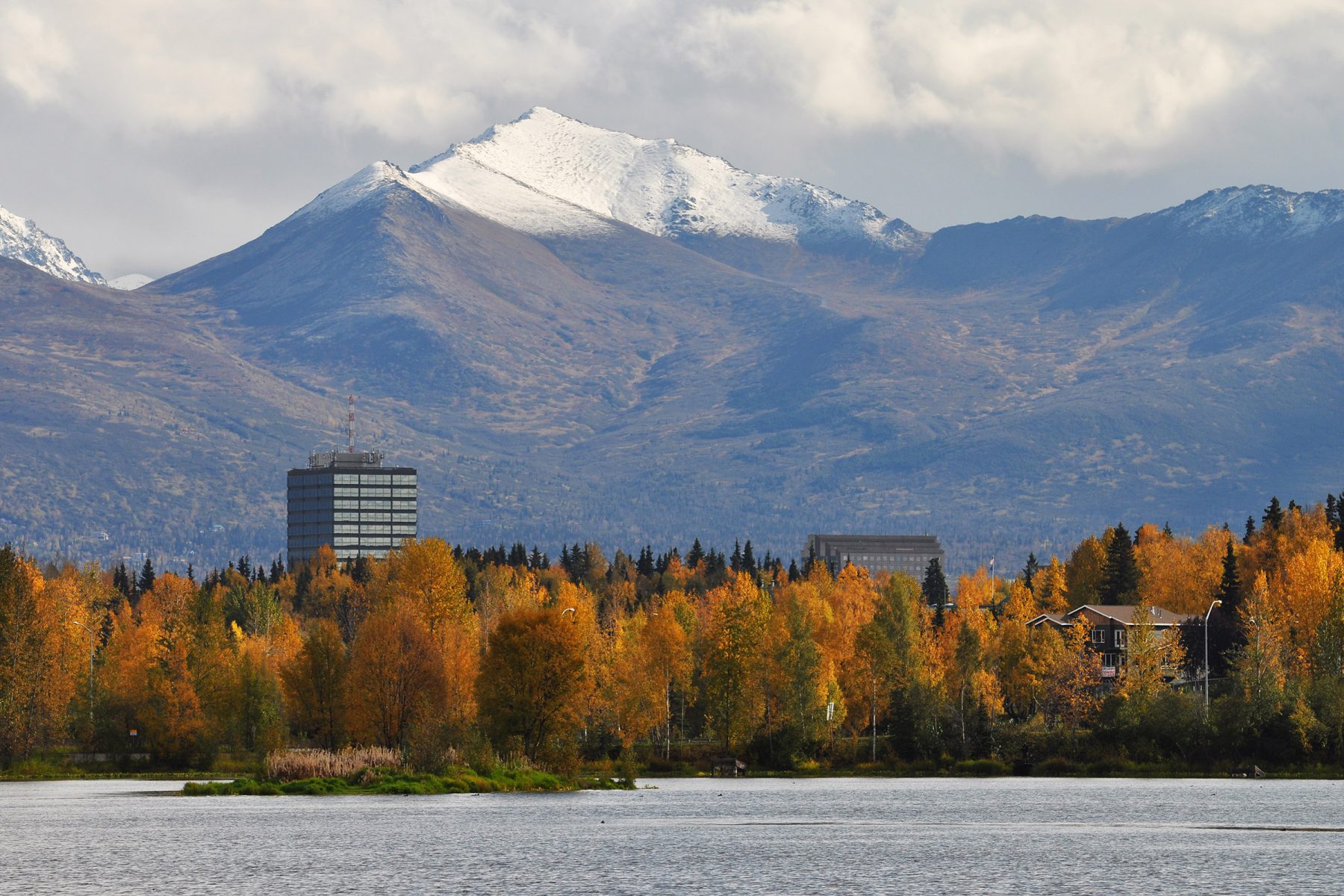 Most people take on Wolverine from the Prospect Heights trailhead. Parking in the large requires a $5 payment or an annual state parks pass. Follow the four-wheeler trail a couple hundred feet and turn left/north onto the backcountry boulevard known as the Powerline Trail. The Powerline Trail follows the power lines for a little while, turns away from the lines and drops down a hill (at which point it becomes the Wolverine Bowl Trail), crosses a bridge over Campbell Creek, and switchbacks up the other side of the drainage. At the prominent signpost indicating the Wolverine Peak Trail, you’ll turn right/east and begin to ascend the actual peak.

There’s an alternate, often-overlooked route to the base of the peak that begins at the Basher Trailhead. This route winds through a net of human and game trails spread over the lower Hillside, and offers a quieter, more “wild” alternative to the highway-like Powerline/Wolverine Bowl route from Prospect Heights. Park at the Basher trailhead and walk south along the 4-wheeler road, under the power lines, until it ends abruptly at the edge of Campbell Creek Canyon. At this point, take the small singletrack trail (sometimes labeled the “Lost Cabin Trail”) heading east along the edge of the canyon. This trail will eventually cross a bridge in a small meadow and fork. Both trails will connect with the Powerline trail, but the more direct route to the base of Wolverine heads northeast. There are some unsigned small trails and cutoffs–if in doubt about your route, just keep heading toward the mountains. The trail meanders up a series of low forested hills and moose-inhabited meadows, and eventually sets you onto the Wolverine Bowl trail right at the cutoff for Wolverine Peak.

Once you turn onto the Wolverine Peak Trail, your’re heading up. And up. And… up. Though Wolverine is a straightforward hike, it is nonetheless pretty relentless. The total elevation gain to the summit, at approximately 3,500 feet, is more than two and a half times that of climbing Flattop from Glen Alps.

The first section of trail climbs about 1,200 feet up the side of an old glacial moraine, into the middle of the Wolverine Bowl. The trail quickly tightens down to singletrack, and squiggles up a few groves of wind-stunted spruce as it breaks out into open tundra. The first panoramic views of Anchorage open up here, and there are a few choice rocks to plop onto to rest or take photos.

A large cairn marks the crest of the moraine. This point is almost exactly halfway (both vertically and horizontally) between the Wolverine Bowl Trail and the summit ridge. Most articles online suggest stopping here if you’re too tired to continue, and doubtless many people will accept that advice. If the sun is out and wind is down, this is a perfect place to plop down and enjoy the views.

The next stage of the climb heads another 1,200 vertical feet directly up the shallow spine of the moraine, toward the summit ridge. This part of the hike can feel a little like a slog, since it’s longer than it looks and topographically it’s not very interesting. But the hiking remains easy and the views do–gradually–get better. On this part of the hike, “slow and steady wins the race” might be a good mantra.

Hitting the summit ridge is always rewarding. The views open up to the north, while below you the steep crags and cliffs on Wolverine’s northern face can make it feel, suddenly, like a more serious mountain. The trail stays right on the tundra ridge, though, and unless you go scrambling down the crags to pose for photos, the route is just as non-technical here as anywhere else. The summit ridge is about a half-mile long and only climbs about 200 vertical feet. Unless the weather is truly abysmal, the summit views off of Wolverine are a treat. I’m not giving them away, though, so if you’d like to find out what it’s like up there (sans Google), you’ll have to head up there yourself. Most people will want to return to the trailhead following the same route down.

Much of the terrain on Wolverine is low-angle open tundra, and there are trails up several adjacent valleys and peaks. This makes it a good place for relatively easy off-trail backcountry loops. To the north is the Near Point/Long Lake Trail, which can be reached by hiking off the northwest ridge of Wolverine. Wolverine’s west ridge leads to Rusty Point, above the Williwaw Lakes and Middle Fork Loop trails. If you’re up for a longer day, the Class 2/3 east ridge off of Wolverine leads 2.5 miles into the heart of the Chugach toward Mt. Eliot, at which point you can drop off of Eliot and head back to town via the Long Lake or Williwaw Lakes trails.

I would generally avoid hiking north right off the summit of Wolverine, since the terrain is craggy and steep. There are some cliffs and loose rock around Rusty Point. If you hike off of Rusty Point, be prepared for thick brush before you reach the Williwaw Lakes or Middle Fork trail. 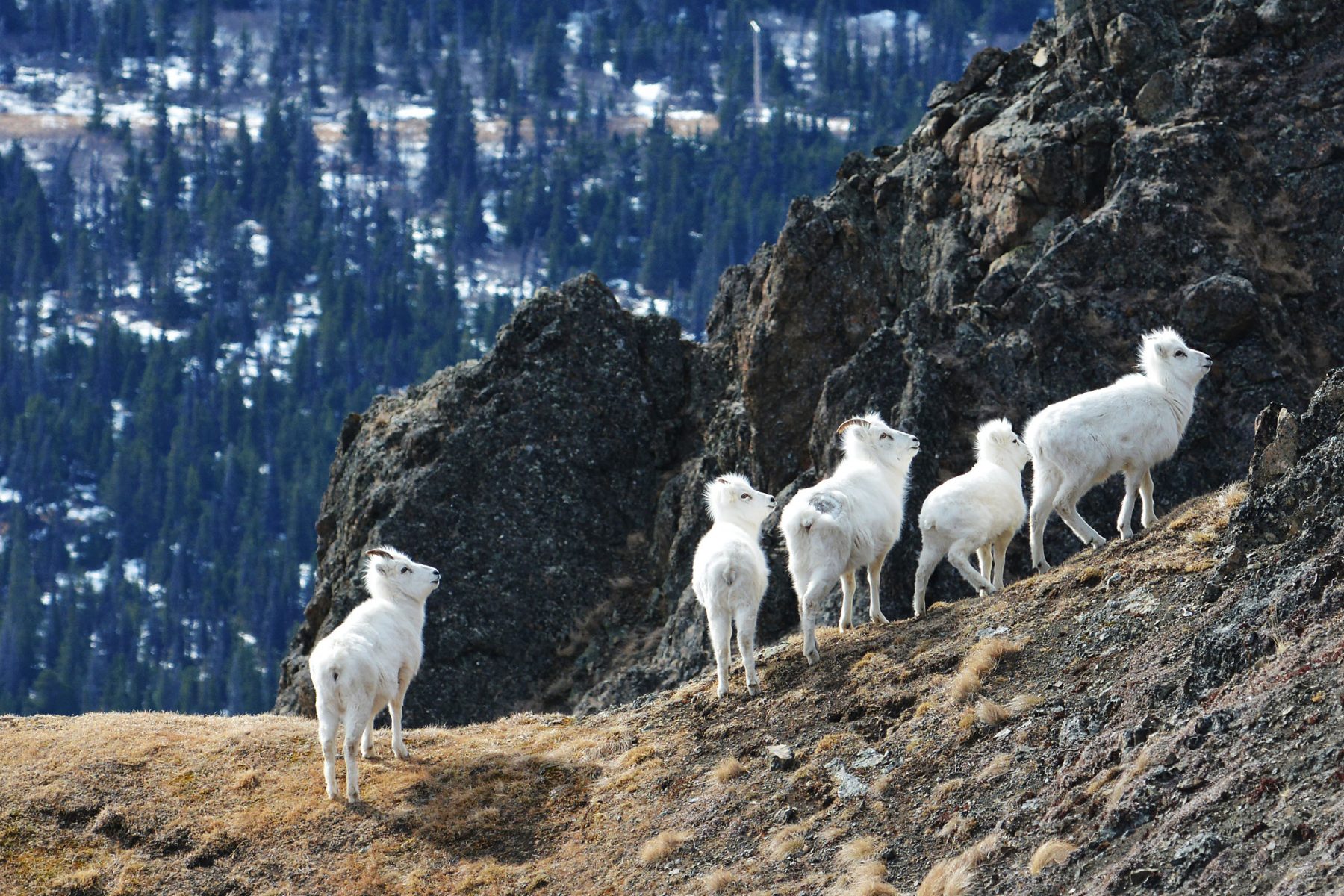 Wary dall sheep climbing around the crags on Rusty Point

The Wolverine Peak trail sees plenty of use during the winter months, too. The lower-elevation trails are often packed out by runners, snow shoers, fattire bikers, and skiers. Above treeline, high winds scouring the face of the front range usually prevent much snow from building up on the main route. The climb up the moraine to the center of the of the bowl can include lots of slick hard-packed snow and ice, for which crampons/Yak-Traks would be helpful. Cornices may form on the final summit ridge, and there is–at least in theory–potential for avalanche danger in the two gullies adjacent to the trail and on some of the steeper faces in the bowl–though not, typically, on or above the trail itself. The route up Wolverine can be scouted from just about anywhere in Anchorage. 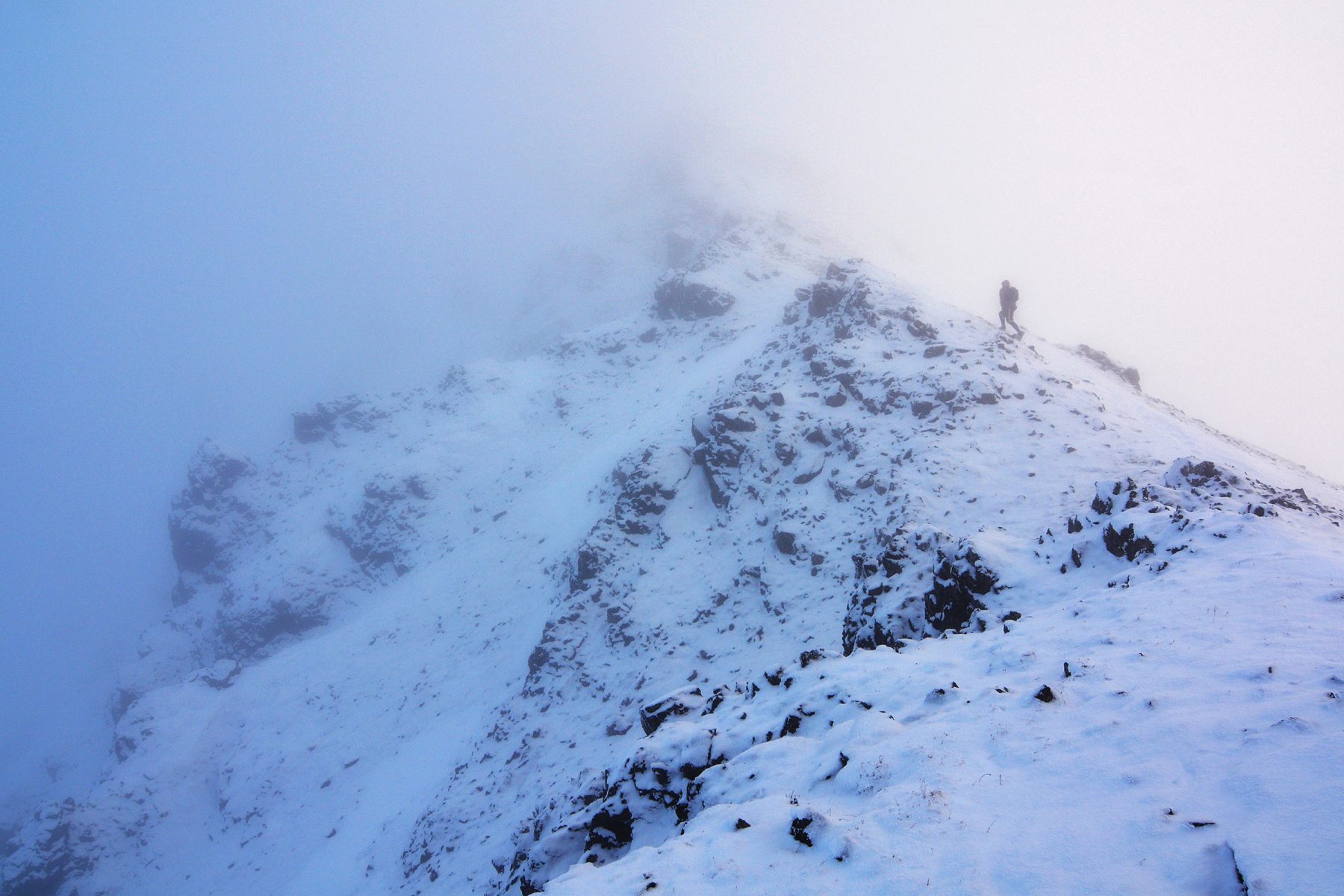 Cale Green heading up the final stretch to the summit of Wolverine Peak. Because of its low grade and the relative lack of snow on the standard route, Wolverine can be an accessible winter hike under low-to-normal snow conditions.