The Wedge isn’t exactly an unknown peak: it’s visible from most of Anchorage and is easily accessed from Glen Alps. But it is often strangely overlooked. Guidebooks tend to lump it in with the Ramp, even though the two peaks aren’t especially close and in fact sit on opposite sides of Ship Lake Pass.

But the Wedge has a lot to offer, both to beginner hikers and Chugach veterans. Hikers can enjoy either a hands-free, walk-up ascent with inspiring views into the wild heart of Chugach State Park, or tackle a more challenging route through scree, steep tundra, and alpine boulder gardens. 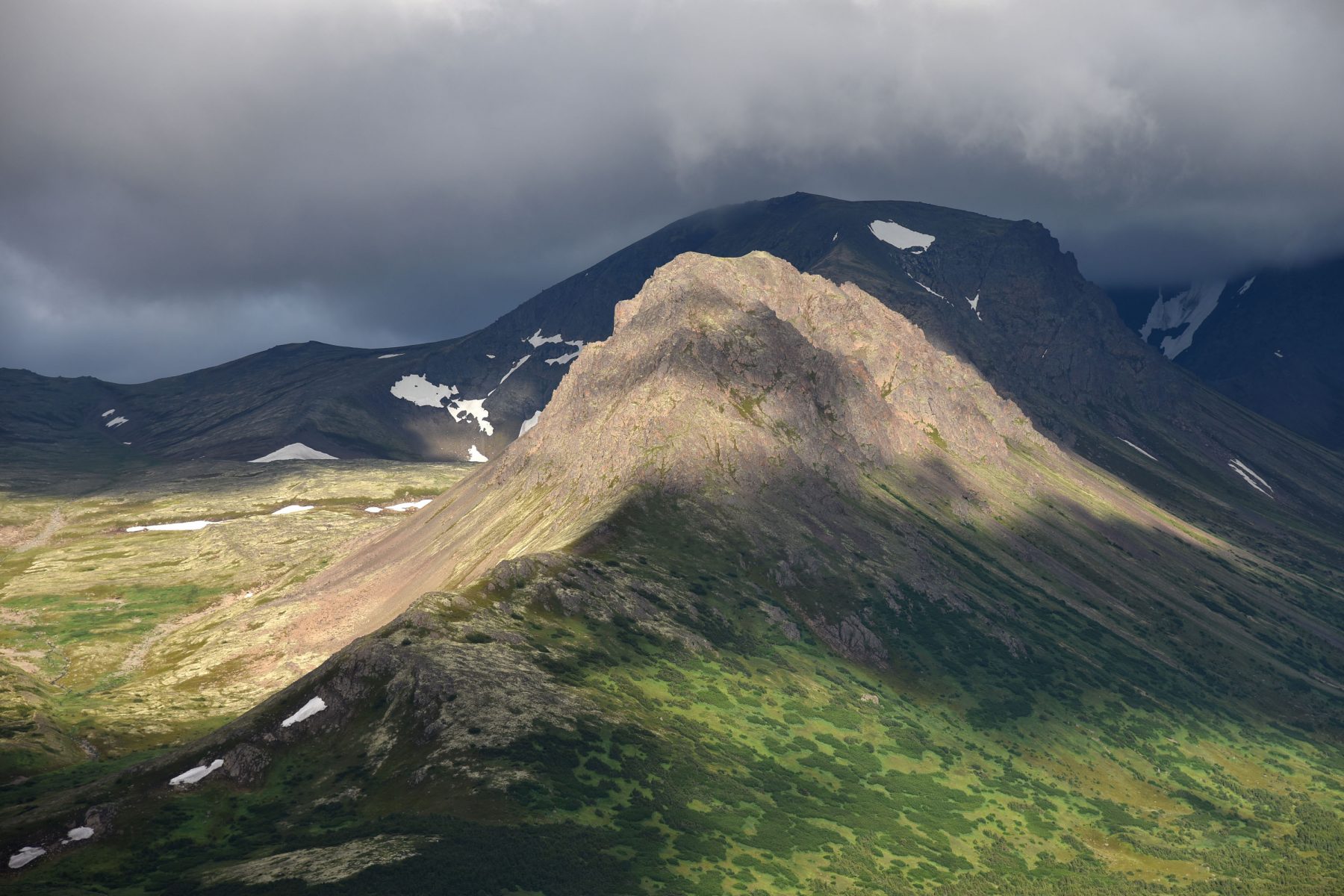 The Wedge, as seen from Flattop. The “tip” of the Wedge is in sunlight and the summit sits behind in shadow.

The Wedge is easily accessed via the popular Glen Alps trailhead. There are three obvious routes up the Wedge: a walk-up ascent from Ship Lake Pass, an adventurous scramble up the northwest ridge, and a backcountry stroll through the south bowl and up the peak’s the southeast ridge. It is also possible to scramble up the Wedge from various points on its south aspects. The mountain’s northern faces are riddled with steep cliffs that may interest rock climbers, but hikers are better-served by other approaches. 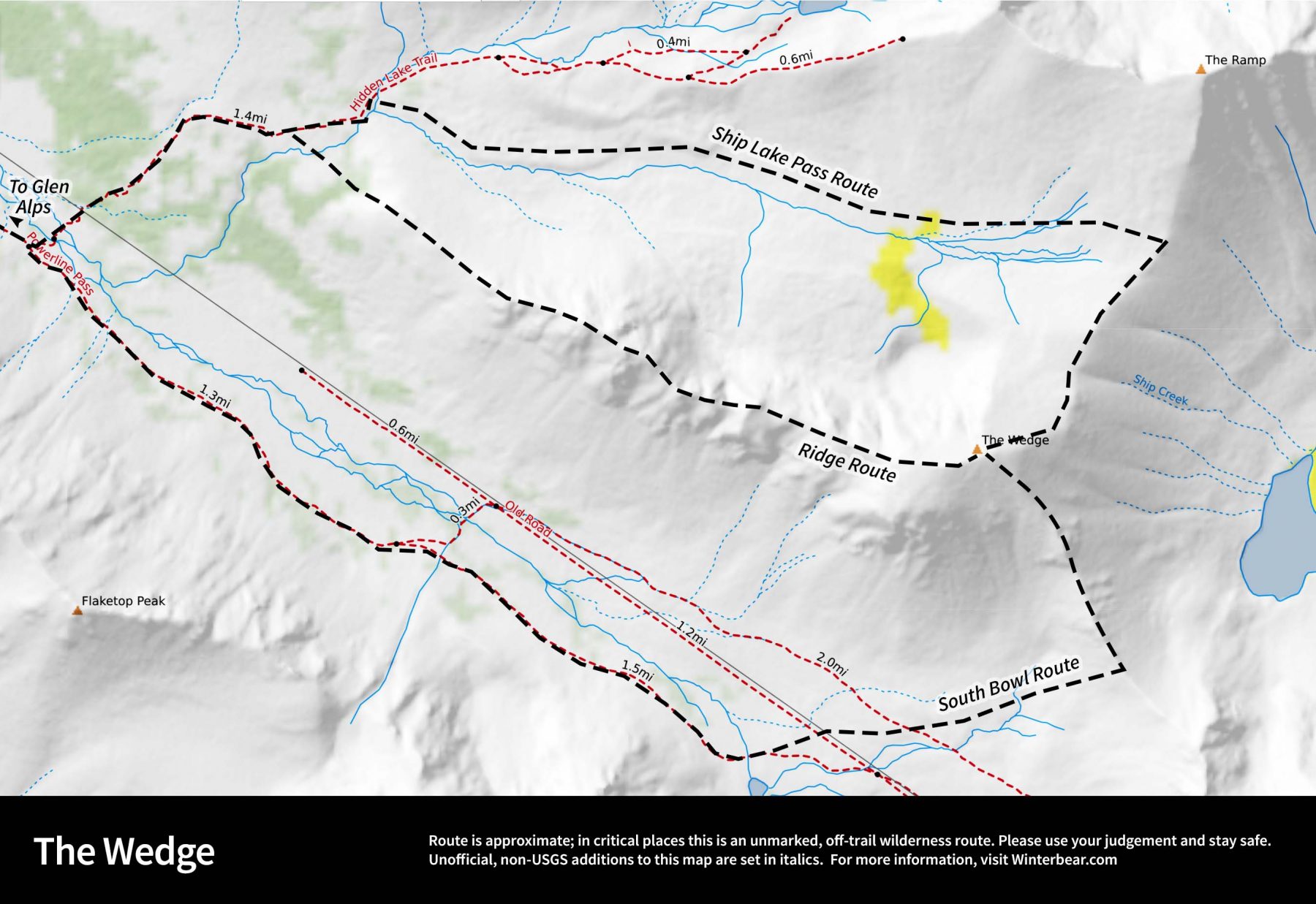 Map of the Wedge, with main routes shown.

Park at Glen Alps and follow the Powerline Trail southeast until it intersects with the cutoff for the Hidden Lake/Ship Lake Pass Trail. Biking the Powerline Trail saves time and there is a metal bike rack at the intersection. Continue up the Hidden Lake/Ship Lake Pass Trail on foot, crossing the bridge and then winding up through stands of dwarf trees.

As the trail breaks into open tundra it unravels into a series of smaller unsigned trails. There are many possible routes through this area and the open tundra permits easy corrections if you find yourself off-track. Just stay oriented east-southeast toward Ship Lake Pass, the broad u-shaped low point between the Ramp and the Wedge.

The tundra ramps up steeply just before the pass, and a hard-packed snow chute may persist here until midsummer. Traverse around it and switchback as necessary to gain the pass.

To reach the summit, turn right/south from Ship Lake Pass and follow the faint trail to the top of the peak. The last several hundred feet may require ascending loose rock interspersed with tundra, but the angle is relatively low and those who have successfully climbed Wolverine or Flattop should have few problems. 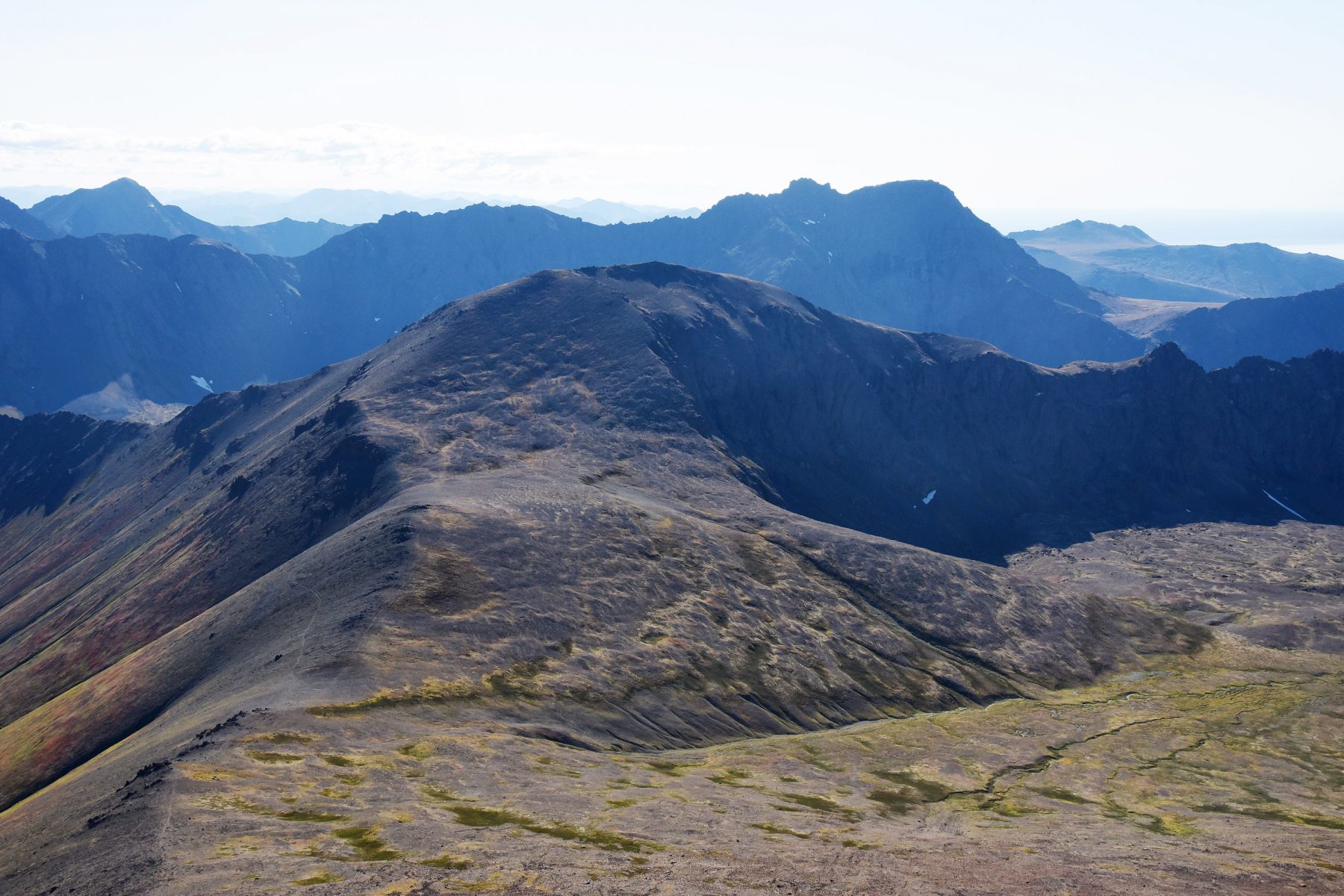 The summit of the Wedge, as seen from the Ramp. Ship Lake Pass is in the lower left corner.

The views between Ship Lake Pass and the summit of the Wedge are a treat. Hikers may admire the deep turquoise color of Ship Lake, the elegant U-shaped tundra valleys or the craggy summits of dozens of Chugach peaks. 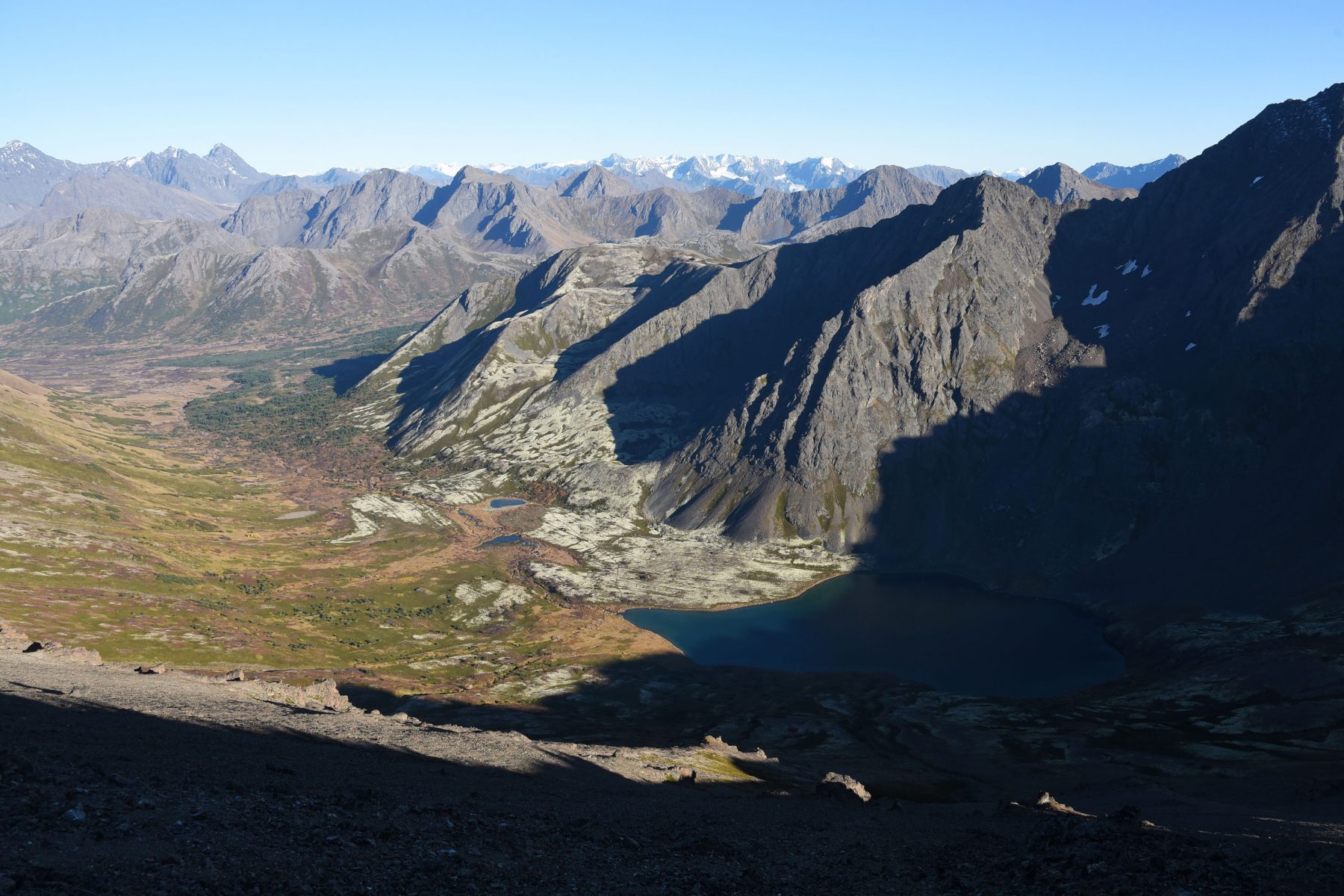 Looking northeast from the Wedge, down the glacier-scoured valley between Avalanche Peak and the Ramp.

The ridge route begins with the same approach as the Ship Lake Pass route, but veers off of the Ship Lake Pass trail as it approaches the tip of the Wedge. Bushwack through knee-high grasses and wind-stunded trees, hop the small creek, and climb up into the tundra toward the crest of the ridge. This route stays on the crest all the way to the summit, only deviating where needed to avoid exposure.

The ridge begins with an intimidating-looking gully. Dont’t worry–it’s easier than it looks. 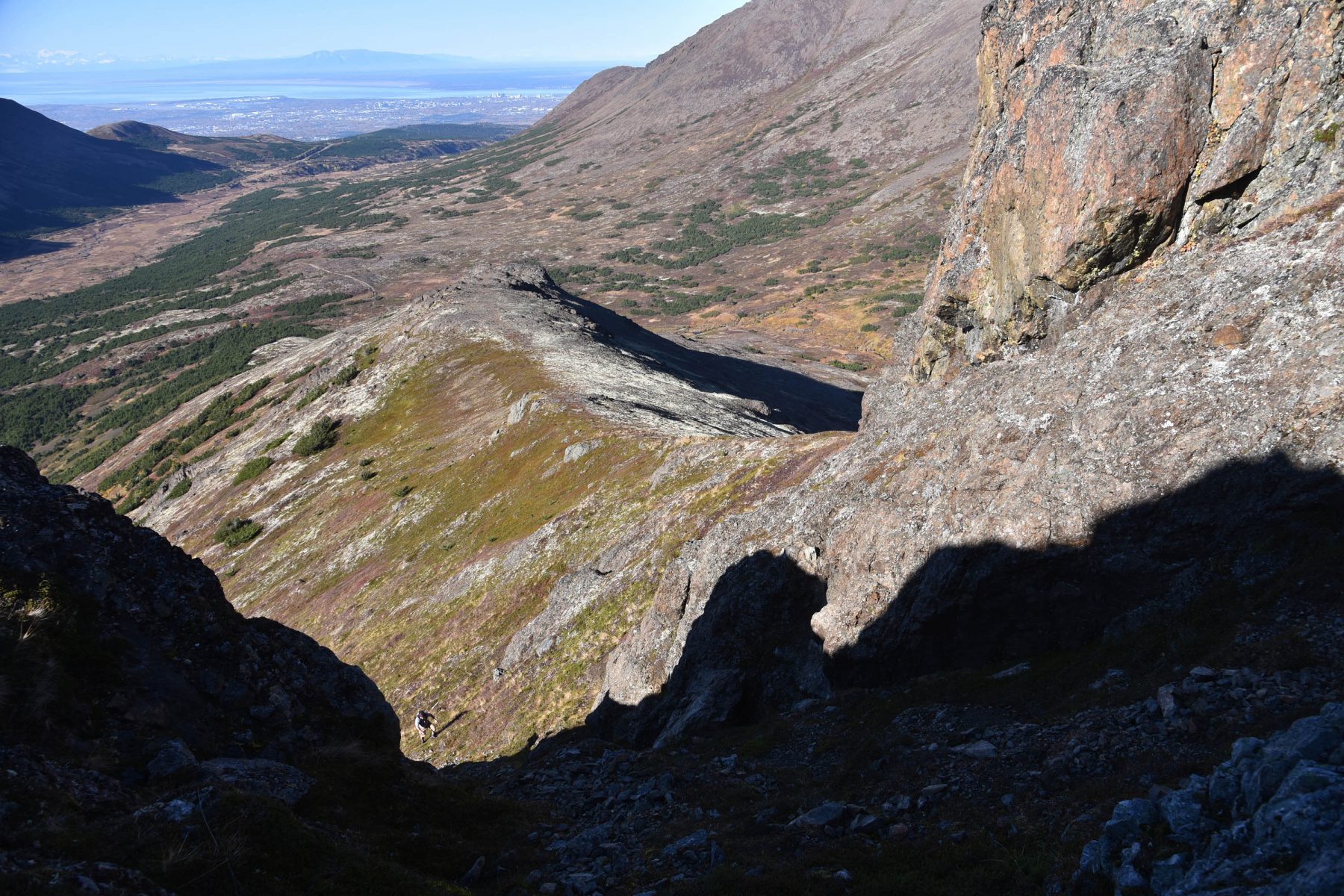 Climbing the first gully onto the crest of the Wedge.

Beyond the gully, follow the ridge to the top of Point 4160. This portion of the hike falls somewhere between Class 2 and simple Class 3, and there shouldn’t be a need to deviate more than a couple dozen feet from the ridge crest. 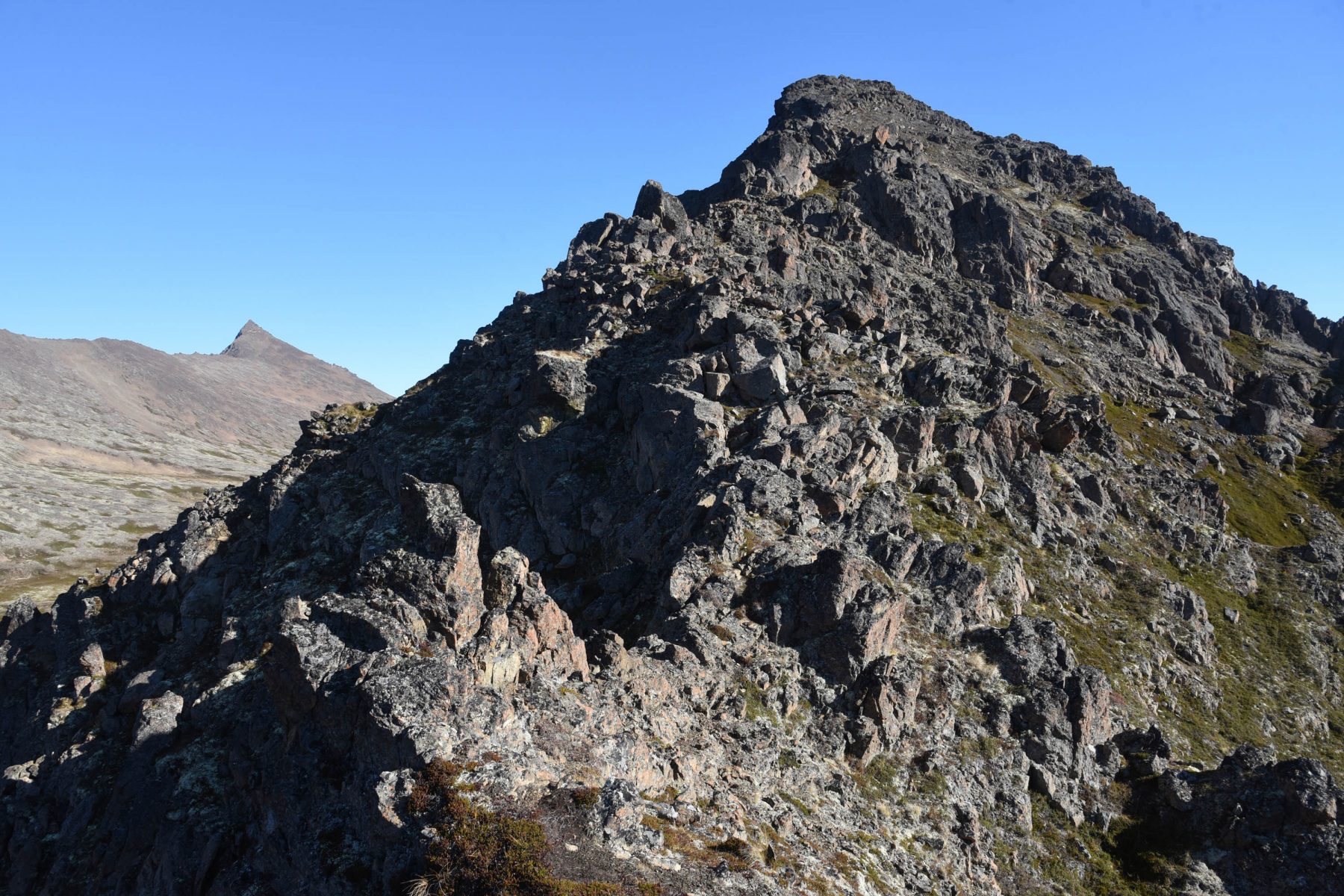 Tundra and rock interspersed on the northwest ridge of the Wedge.

For about a quarter-mile past Point 4160, several cliff bands intersect and make travel more challenging. It may be necessary to move more onto the sides of the ridge to avoid exposure. 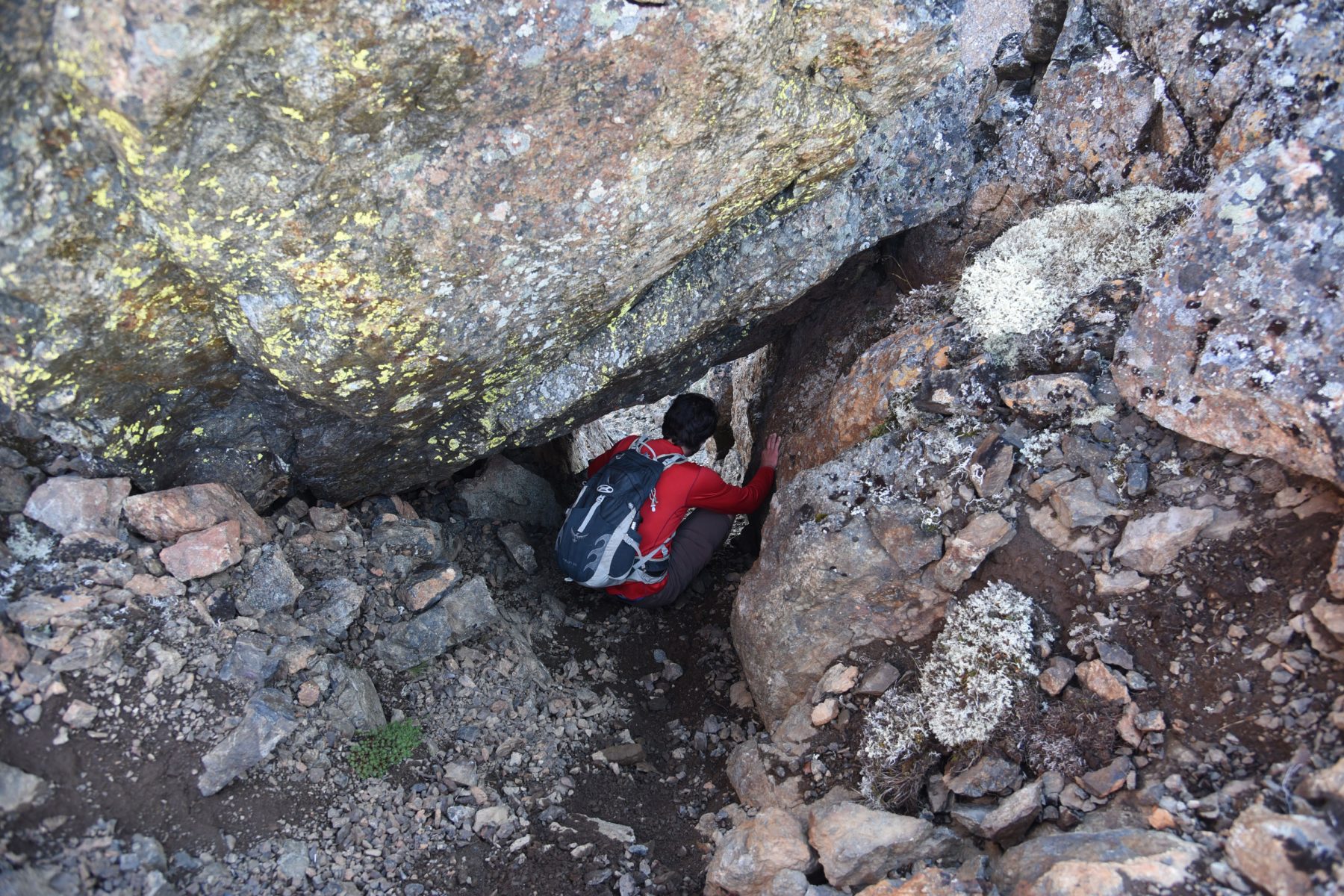 One of many “unique” approaches on the ridge route.

The last half-mile to the summit is an easy, enjoyable Class 2 walk-up over open tundra.

Near the summit of the Wedge looking back toward Point 4160, with Flattop and Anchorage in the background.

The south bowl route crosses an expansive tundra bowl between Avalanche Peak and the Wedge, gains the pass between the two peaks, and then climbs the Wedge’s southeast ridge to the summit. While it is longer than the Ship Lake Pass route it is barely more difficult, and it sports some of the finest open tundra walking in Chugach State Park. 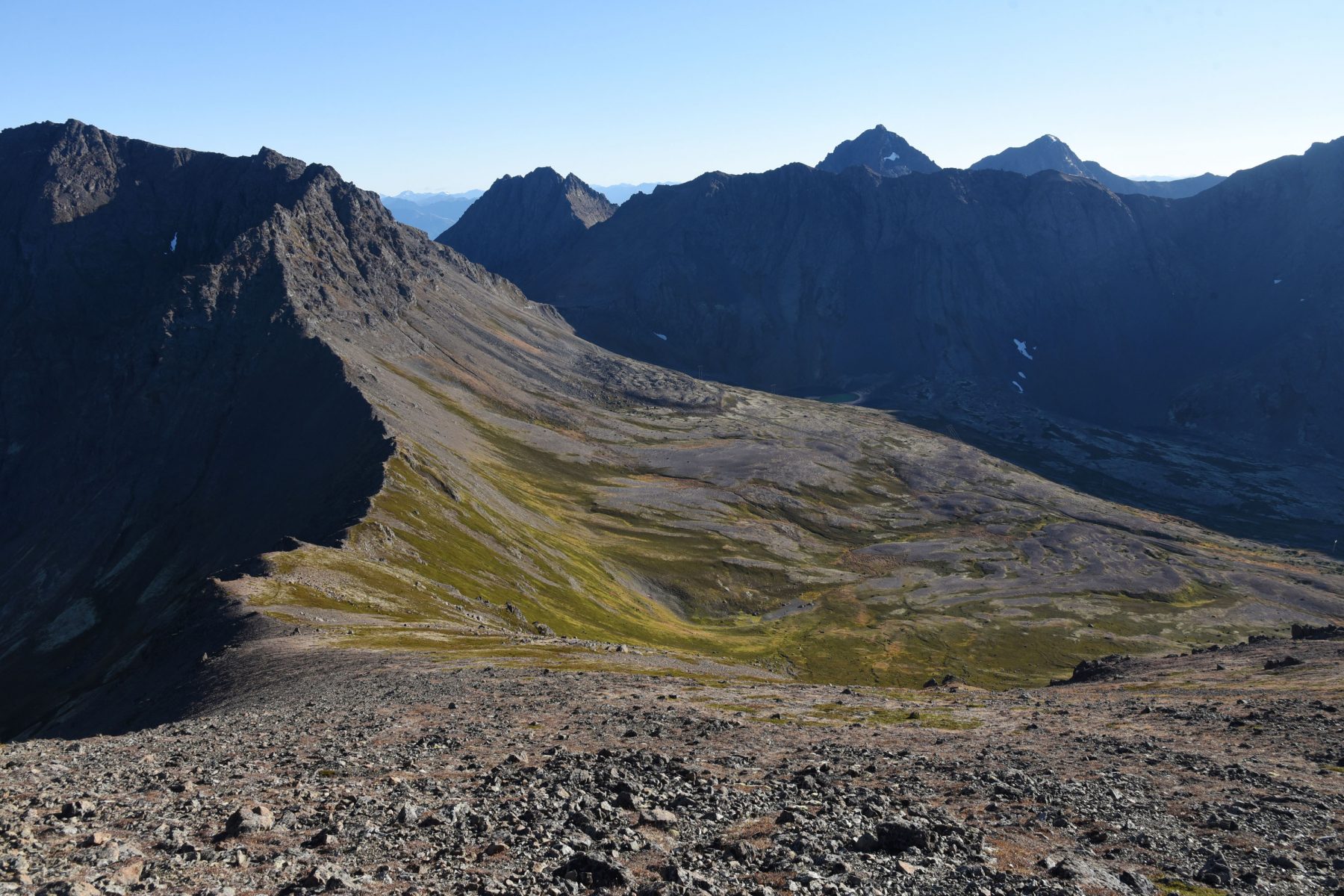 The south bowl, as seen from the Wedge’s southeast ridge. This beautiful bowl is barely visible from Glen Alps, and you are almost certain to have it to yourself.

To approach the southeast ridge, head toward Powerline Pass on the Powerline Trail and peel off of the trail whenever the tundra opens up. You will have to ford the small creek regardless of when you leave the trail. Amble across the tundra, aiming for the pass between the Wedge and the Ramp. The tundra does angle up abruptly as it nears the pass, and may be slippery in the rain. Once at the pass turn left/northwest and hike the ridgeline to the summit. There are a couple easily-avoided rocky outcroppings with exposure, but otherwise it is a simple walk-up ascent.

One excellent variation of this route skips the summit of the Wedge altogether, and instead traverses the back (eastern face) of the Wedge on a well-defined sheep trail between the Wedge/Avalanche pass and Ship Lake Pass. The endpoints of the sheep trail are a bit higher than the lowest point on either pass, and it is generally easy to find.