I often think of Rainbow Peak as a kind of “Flattop for locals.” Both peaks are easily accessible from Anchorage, take a half day or less to climb, and are almost the same height (3,543′ for Rainbow and 3,510′ for Flattop). Both sit on the edge of Chugach State Park and punch above their weight in terms of views. But Rainbow is without a doubt a longer, more difficult (and arguably, more rewarding) venture. The route starts at sea level, so making the summit requires two and a half times the elevation gain of its rival to the north. And once you leave the Turnagain Arm trail and begin climbing the peak itself, there’s no official trail at all. The route requires some routefinding on sheep trails and scrambling up scree. Once at the top, though, you’ll have one of the best views in the Chugach up and down Turnagain Arm, and unlike at Flattop, you’ll likely have this beautiful and often-overlooked summit to yourself. 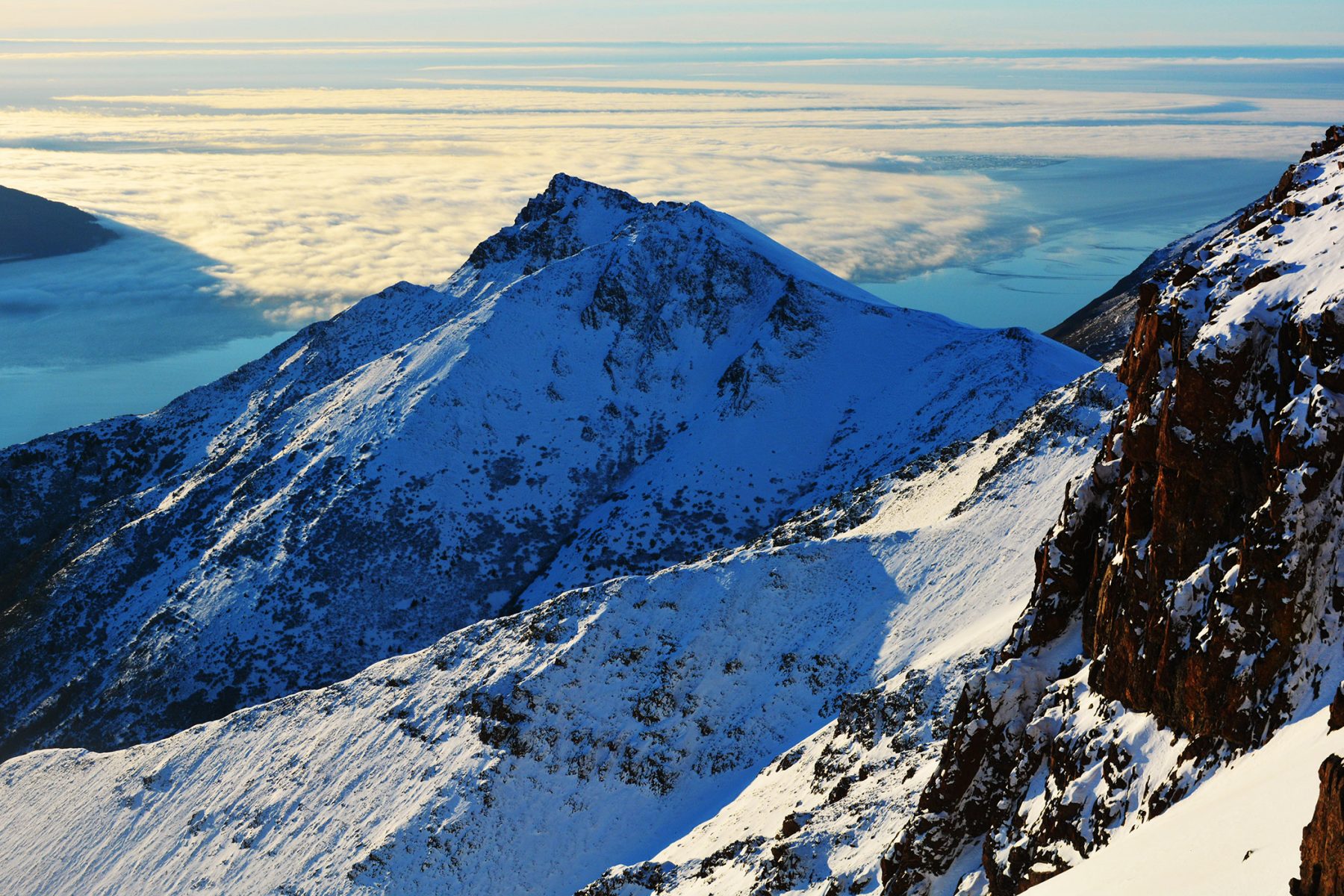 Rainbow Peak, as seen from the ridge between Rainbow Peak and South Suicide Peak

The standard south ridge route on Rainbow Peak climbs a steep south-facing shoulder that leans into Turnagain Arm. This shoulder is exposed to the full force of wind rushing down the arm and any direct sunlight, both of which prevent snow accumulation. Rainbow Peak is one of the last peaks in the Chugach to “close” for the winter and first to “open” in the spring. Even in winters with normal snowfall and deep snow on adjacent peaks, Rainbow can look oddly naked in comparison. Oftentimes, the only part of the route where snow collects during winter is between Point 2,900 and the summit, when the trail traverses the southeast face before climbing to the ridgeline. While nontechnical winter ascents are often possible, normal 3-season hiking conditions on Rainbow tend to be found from early May to late October.

Rainbow Peak is situated between the popular McHugh trailhead and the Rainbow trailhead, and at the end of a long ridgeline connecting it with South Suicide Peak. There are several interesting routes to the top of Rainbow, including most notably the long, fun, sheep-trail-riddled Class 2-3 ridge between South Suicide and Rainbow. But the fastest and most direct route up Rainbow Peak starts at the official Chugach State Park Rainbow parking lot. It zigzags through the trees on the well-worn Turnagain Arm Trail, veers straight up the unofficial trail up the south ridge of Rainbow Peak to Point 2,900, briefly traverses a sheep trail on the southern face, ascends a short scree slope, then follows the ridge a couple hundred feet to the summit. This route is a solid introduction to off-trail hiking in the Chugach and remains on the easier side of Class 3 (Summitpost calls it a Class 2). 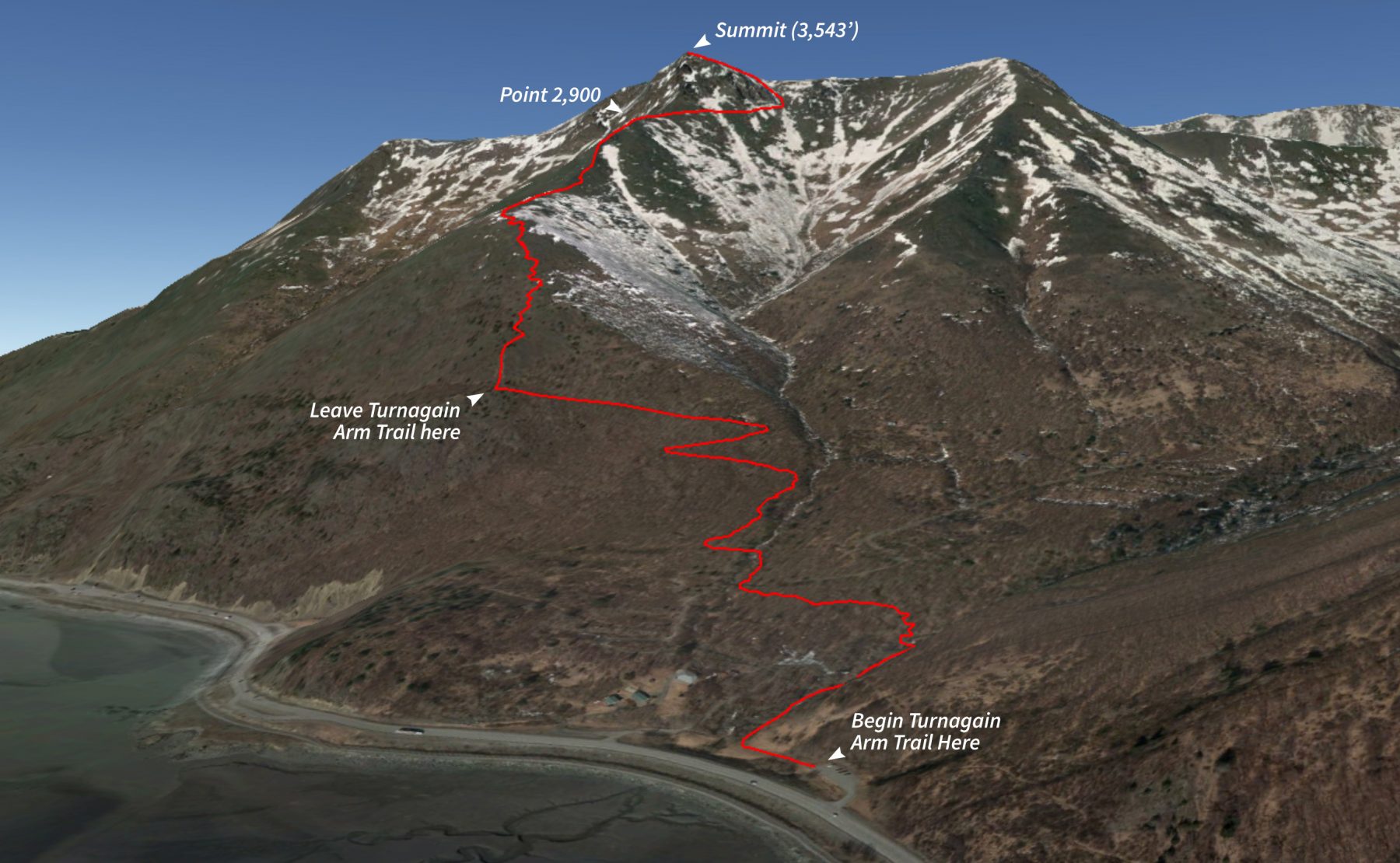 A screenshot of the approximate route up the peak, from Google Earth

The Rainbow trailhead is just off the Seward Highway, between the more popular McHugh Creek and Falls Creek trailheads. There is no parking fee, and there is almost always plenty of room to park.

There isn’t adequate signage at the Rainbow parking lot, and an easy mistake to make here is simply starting off in the wrong direction. The Turnagain Arm trail goes both east and west from this parking lot. The eastward trail starts at the far corner of the parking lot from the road. It immediately starts climbing northeast, up the hill directly behind the lot. To climb Rainbow, you’ll want to head on the Turnagain Arm trail to the west. Walk straight between the wooden posts at the far side of the lot onto what looks like an old, overgrown roadbed. Follow the light trail here a few hundred feet on the roadbed, at which point you will come to a creek. The trail will turn right/north 90 degrees and head up the near side of the creek.

The Turnagain Arm Trail is well-established and easy to follow. It crosses the creek, then hops across a road and zig-zags up out of the Rainbow drainage through a series of wooded glades. This area is notorious for bear sightings, so be alert and prepared. At about 1.2 miles from the parking lot, the trail passes a somewhat prominent viewpoint on the left, looking out over Turnagain Arm. Directly across from this lookout point, on the uphill side of the trail, you should be able to find several steep, loose trails coming down the shoulder of Rainbow and intersecting with the Turnagain Arm Trail.

At this point, you’ll break away from the Turnagain Arm Trail and head straight up the shoulder of Rainbow Peak. The first hundred feet of the route is loose, and a good test of your footing (and tolerance for frustration). Brace yourself (or pull yourself up) by using the small trees as needed.

Soon, the several trails dropping onto the Turnagain Arm Trail more or less converge, and you’ll find yourself climbing a steep, rocky, but generally tolerable Class 2+ trail up the shoulder. Except under extraordinary conditions, routefinding should not be difficult. Just stay on the crest of the shoulder and follow the trail(s). Hiking (or jogging) back down this part of the trail can be pretty thrilling, as with every step it looks like the trail is about to eject you into open air, and onto the tops of the trees far below. But the gradient is very consistent and if you’re reasonably careful, this part of the trail should provide few problems beyond the occasional slip.

As the shoulder begins to roll over, the angle decreases but the terrain becomes rockier. You can take sheep/hiker trails around some of the craggy humps but be careful not to follow them too far, and regain the ridge as soon as possible. It’s probably just as easy to scramble right on the crest of the ridge.

Pausing on the shoulder of Rainbow Peak, just below Point 2,900

At about 2.2 miles from the parking lot (1 mile from the Turnagain Arm Trail), you’ll come to the prominent Point 2,900. Above 2,900 is a small saddle, after which the ridgeline immediately turns cliffy. This is a great spot to stop and decide whether conditions are acceptable to climb to the summit, especially in shoulder seasons or in winter. People will inevitably think that photos taken here are from more well-traveled Bird Ridge, farther up the arm. 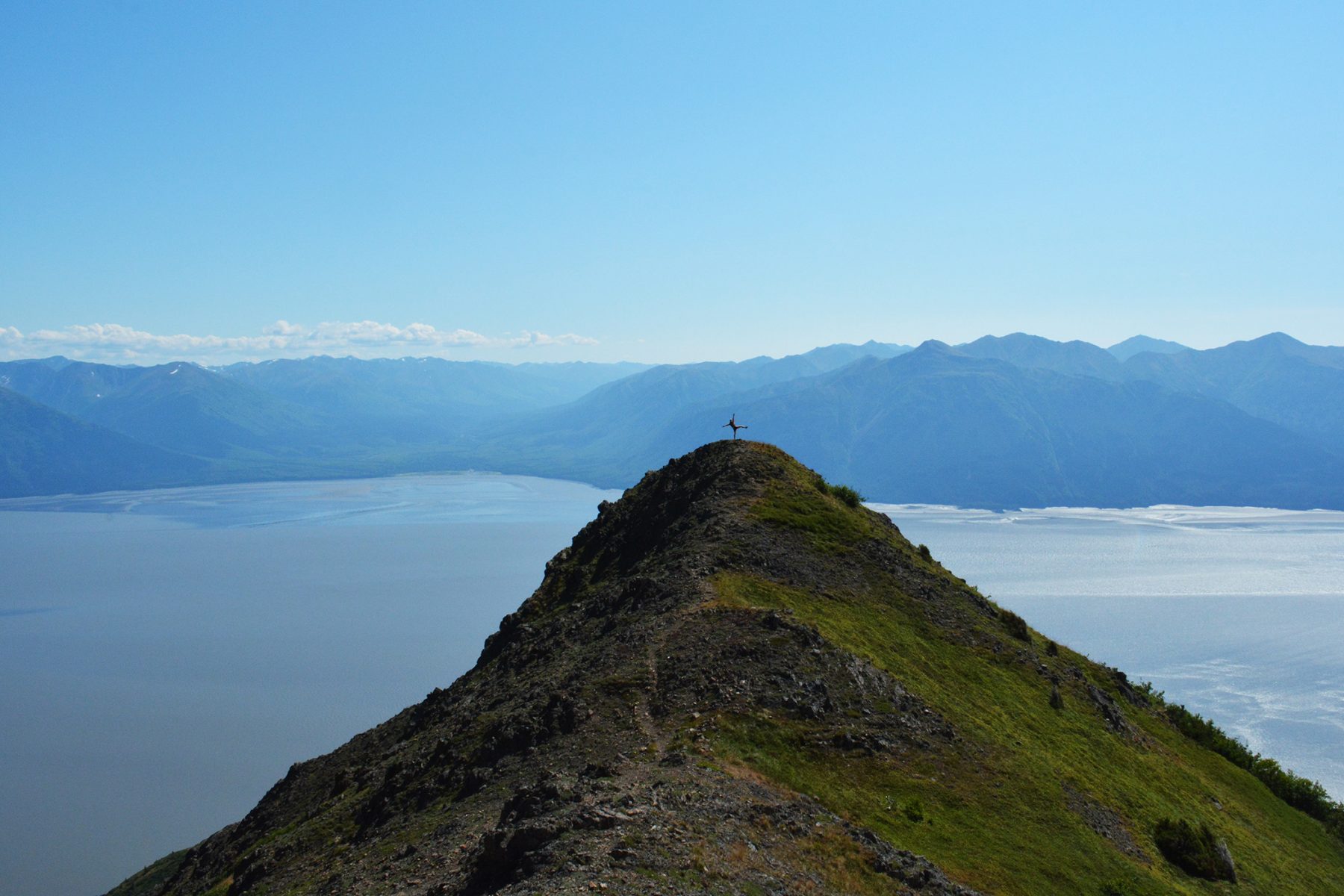 Devin Kelly on Point 2,900, not far below the summit

Above Point 2,900, the ridge becomes a maze of overhanging cliffs and ledges. There’s at least one Class 3 route that threads between these cliffs, but the whole thing is easily bypassed. From Point 2,900, drop into the small saddle and take the very prominent sheep/hiker trail leading directly across the southeast face of Rainbow Peak. This trail will wind around a few rocky points, and there are several good options for cutting up toward the summit. At most, you’ll sidehill on this trail for about a fifth of a mile (1000 feet) until you’re directly below a steep but consistently-graded tundra-and-rock slope leading to the ridgeline. There is some loose rock here and you’ll likely use your hands from time to time.

Wherever you manage to gain the ridgeline, turn southwest and follow the ridgeline a tenth of a mile (500 feet) or less to the summit of Rainbow. 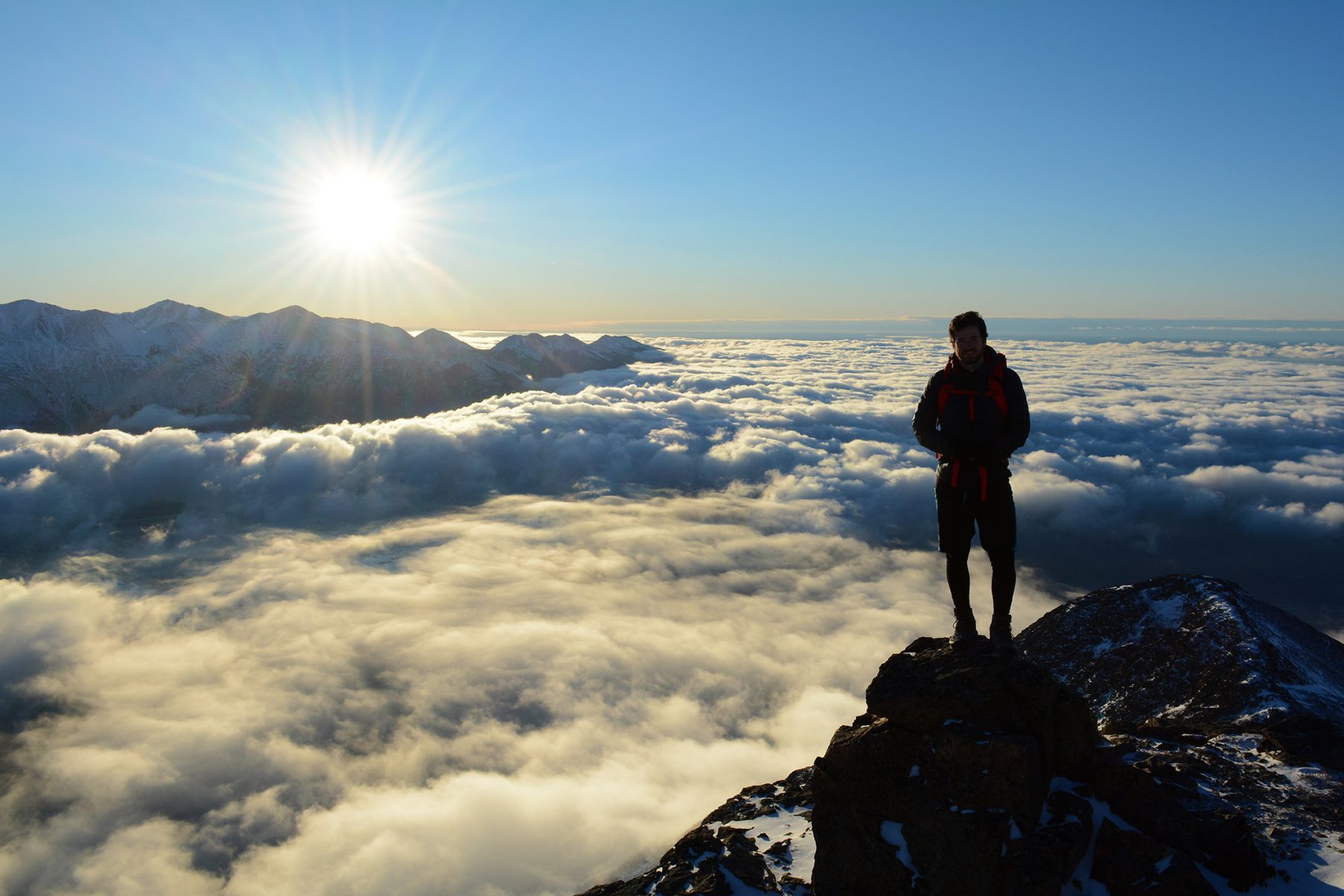