Summiting Ptarmigan Peak is a rite of passage for aspiring Chugach ’schwackers and scramblers. At 4,911 feet, it is the highest point in a roller-coaster ridge of tundra and crags that begins with Flattop (the most-climbed mountain in the Chugach) some three miles to the northeast. Flattop may be many people’s first Chugach peak, but Ptarmigan is likely to be their first challenge. Climbing it requires routefinding as soon as you leave the Powerline Pass or Rabbit Lake trails, and its summit is perched atop a series of rocky fins and gullies.

Though the approach is short and it’s a relatively fast climb, in terms of terrain difficulty alone Ptarmigan is probably on par with the tallest Chugach front range peaks, including Williwaw, Tikishla, and North Suicide. If Ptarmigan Peak pushes you toward your limits, that’s OK. But for those who reach the summit in good shape and wanting more, hundreds of miles of Chugach wilderness is now calling. 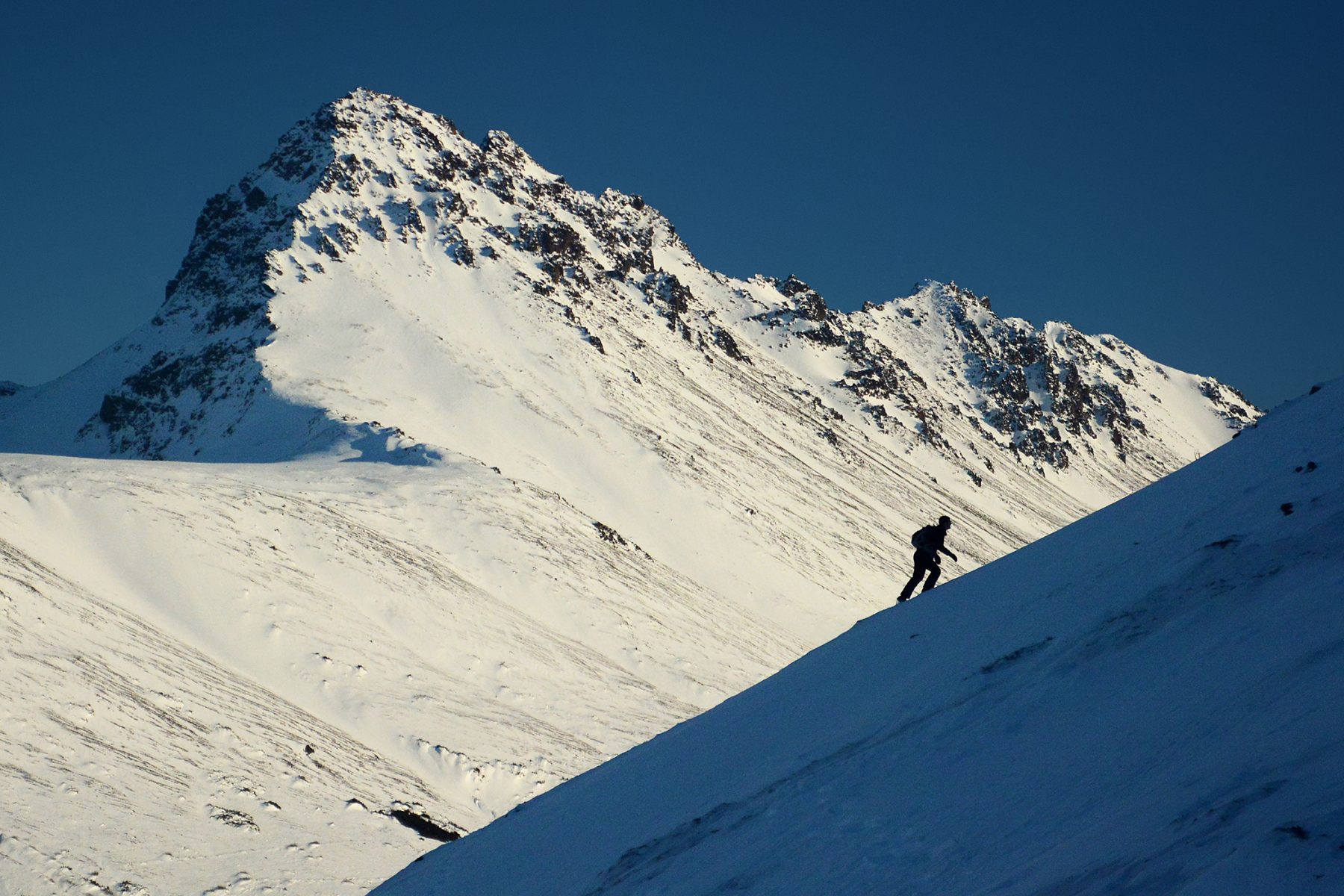 Snow often collects and forms cornices on the main route, even though it receives plenty of sun exposure and wind. The gullies that provide access to the summit on the southwest face are steep and avalanche-prone. Even during low-snow years, nontechnical winter ascents probably aren’t safe. The best time of year for nontechnical summer climbs typically ranges between early June to late October. 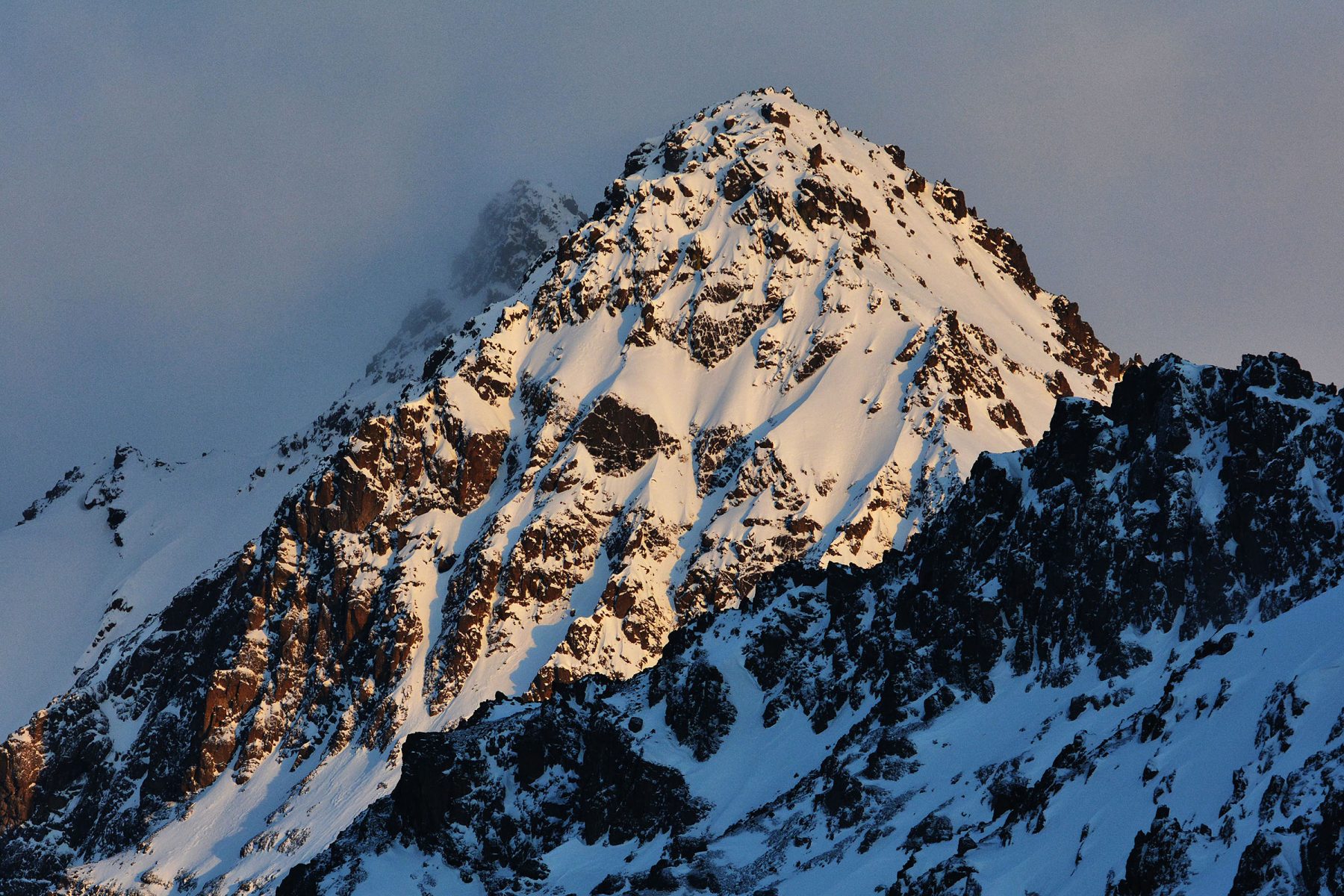 The top of the west ridge and northwest face, shot from the top of Peak 3 in early April

There are many possible nontechnical routes up Ptarmigan’s broad southeast face. The standard, Class 3 summer route begins at Ptarmigan Pass, a broad bench of tundra immediately to the northeast of the peak. There are two approaches: the Glen Alps parking lot and Powerline Pass Trail, or the Rabbit Creek Trailhead and Rabbit Lake Trail. I prefer the Rabbit Lake Trail approach because it’s a little shorter, and the climb to Ptarmigan Pass entails a bit less elevation gain. 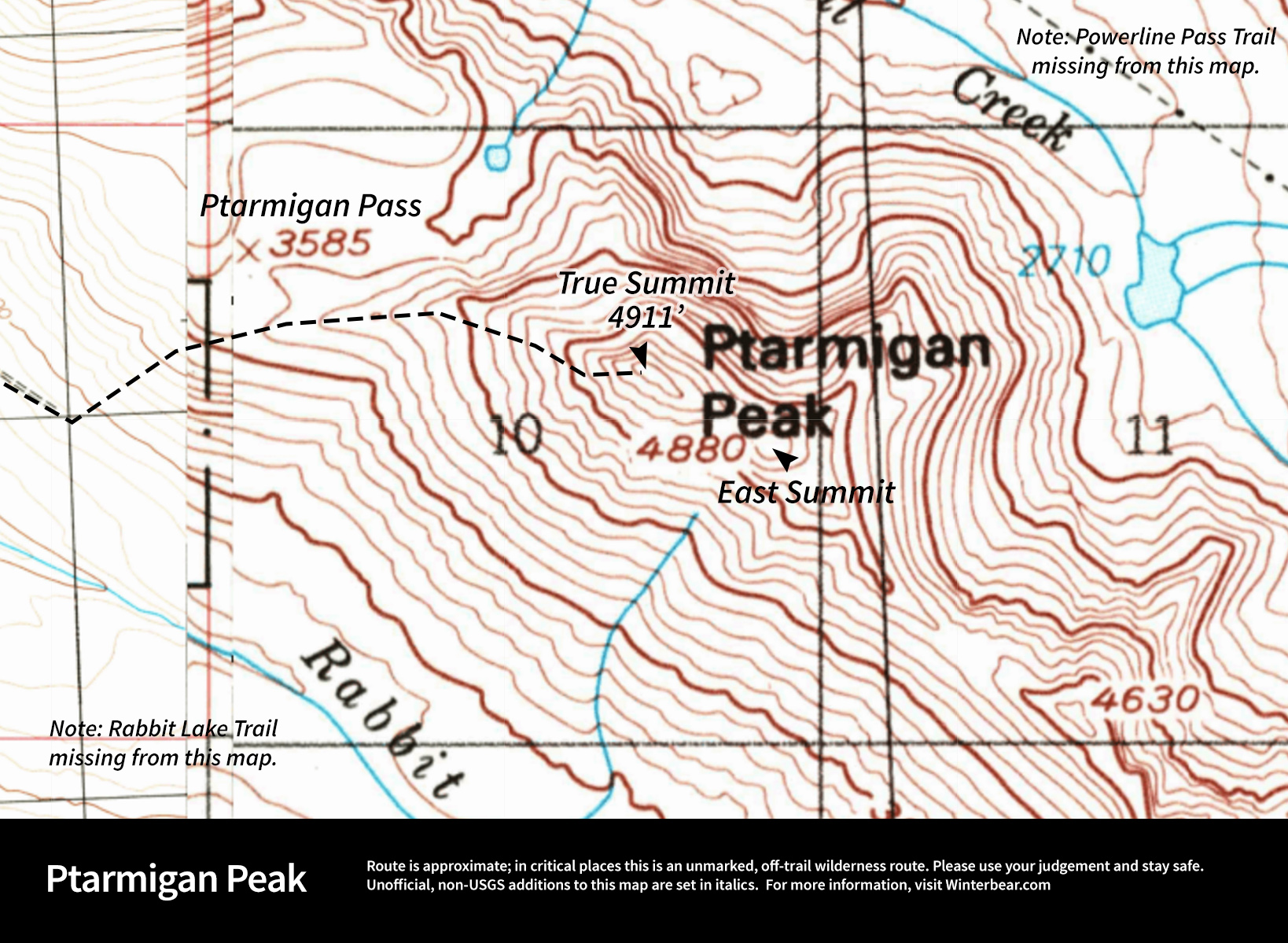 Map of the Ptarmigan Peak west ridge route. Note that this USGS base map does not include the Powerline Pass or Rabbit Lake trails, which run through the valleys north and south of the peak, respectively

Park at the Rabbit Creek Trailhead and walk past the gate up the wide, well-worn Rabbit Lake Trail. The trail is easy to follow provided you stay pointed up-valley and don’t detour onto one of the old road cuts up the mountainside. Follow the trail about 2.4 miles through the alder and across a few avalanche runouts until you break out into open tundra below Ptarmigan Pass. There are many small paths cutting up from the Rabbit Lake Trail toward the pass. Choose any one of them or strike out onto the open tundra your own way. This part of the hike is a bit sloggy, but the footing is generally good and if you embrace the thigh burn, you’ll be up it in no time.

The main route follows Ptarmigan’s west ridge, gradually moving over onto the southewest face when the ridgeline begins to cliff out. Begin by following the tundra-lined crest of the ridge, which steepens steadily and becomes progressively rockier. There is enough traffic consolidated here to make a faint trail.

About half way up the ridgeline, the faint trail runs into cliff banding and begins to disperse onto the southwest face. Move back and forth across the face as needed. There are many options here, and all of the chutes and gullies will eventually lead to the summit. All routes contain steep terrain and loose rock, but should not necessitate anything like true “rock climbing.” Don’t be afraid to backtrack and explore. Just be careful not to cross the west ridge and swing onto the northwest face of the peak, which is very cliffy. 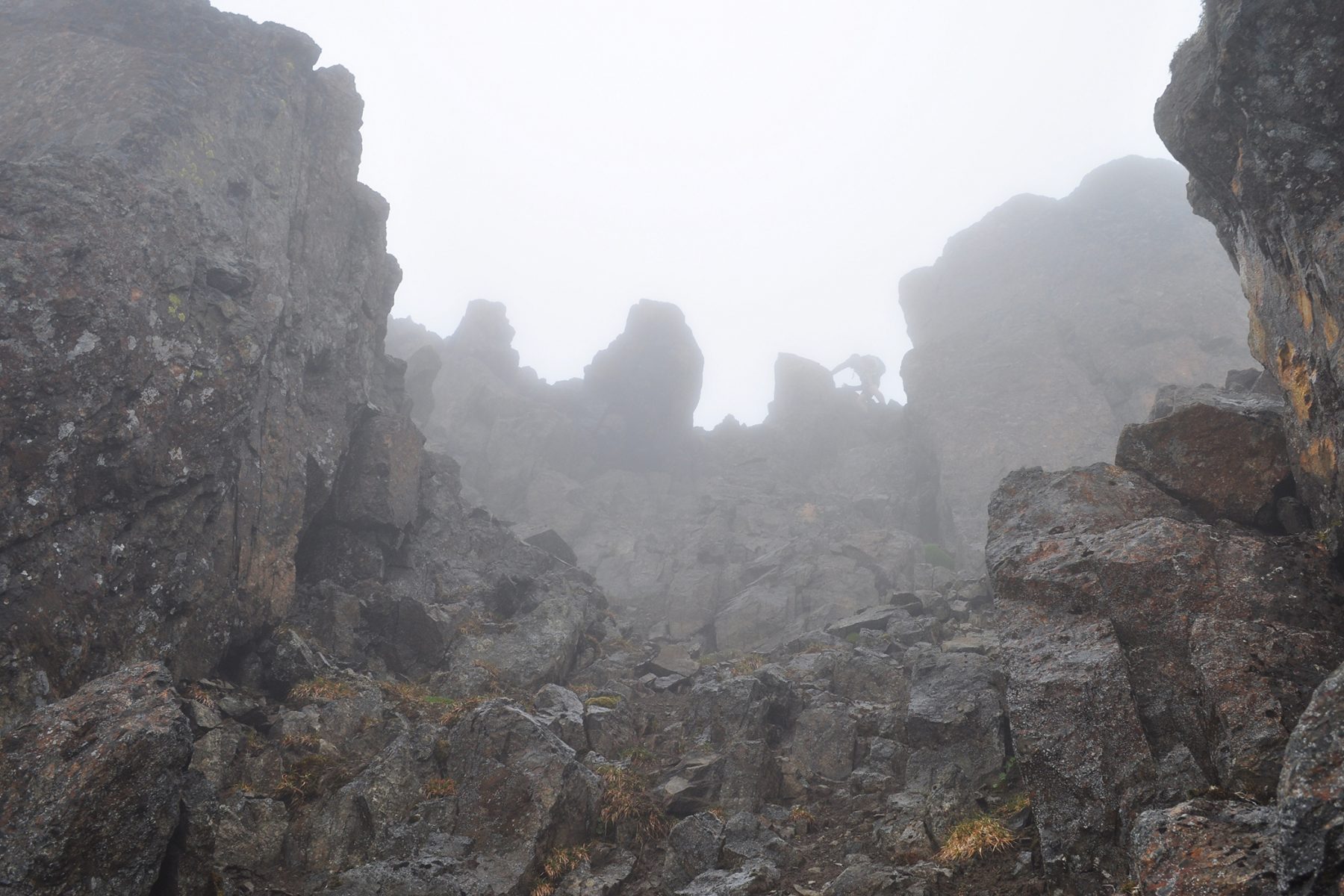 Before you know it, you’ll scramble up a pile of large broken rocks and find yourself at the top. Directly to the southeast you’ll see a steep crag of rock that might look taller, but this 4,880-foot point (often mislabeled as the true summit in online writeups) is actually 30 feet lower than the true (west) summit.

Enjoy the expansive views of other nearby Chugach Peaks, including North and South Suicide, Avalanche, the Ramp, and Williwaw–and maybe start thinking about your next Chugach adventure. 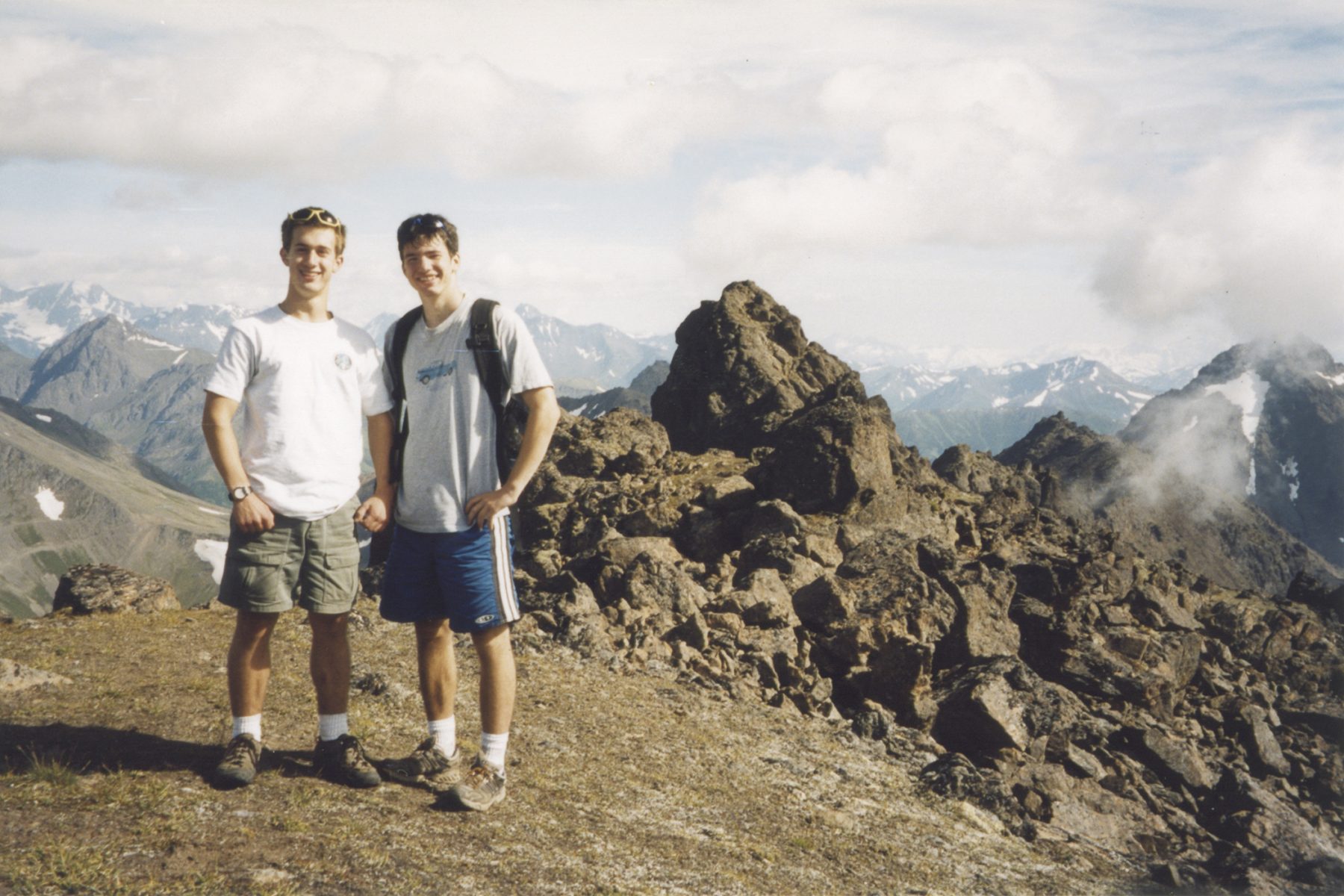 The author (right) and Dylan Watts (left) on the summit of Ptarmigan, in August 2001. Ptarmigan was my first “real” Chugach summmit and the start of many backcountry adventures.

Considering how accessible the peak is from Anchorage, it’s surprising that there isn’t more information online. One high-ranked trip report suggests that it’s easier to climb the peak in the winter. Unless you have technical winter mountaineering experience, this advice is probably best avoided.

This is a great write up! Thank you for the info.