Driving the Seward Highway between Anchorage and Girdwood, you can’t help but notice the long ridge between Bird and Girdwood. From the highway the top of the ridgeline looks remarkably even, almost flat. Do a little research and you’ll find that there are well-established trails that lead to the crest of the ridge at both the Bird and Girdwood sides. At this point the ridge is looking pretty tempting as a long day hike. It promises a fantastic view up Turnagain Arm, bragging rights from Alyeska, and it doesn’t even look that bad! Maybe even easy. Perhaps you’ve even heard that Roman Dial has called this traverse “the best hike in Chugach State Park.” At this point, you’re probably lacing up your boots.

Slow down, at least for a minute. The ridge looks fairly flat from the highway because it is deceptively steep and tall, rising more than 4,000 feet straight from the sea level, and this causes a foreshortening effect at the top of the ridge. A careful look at a topo map will show that there is a startling amount of elevation gain and loss tucked up there. The entire ridge between Gentoo and Penguin includes between 8,000 and 9,000 feet of elevation gain. In terms of elevation alone, this is equivalent to climbing Flattop from Glen Alps six or seven times in a day. Mike Records describes Penguin Ridge as a “stair machine on steroids.”

Roman is right, though. If you’re up for it, Penguin Ridge is a sublime (if borderline masochistic) Chugach mini-epic. The views are spectacular and the ridge rewards you with a fresh perspective on familiar Alaska sights like Turnagain Arm, Alyeska, and the Seward Highway. On a sunny day, it’s hard to argue that there’d be any nicer place to be. 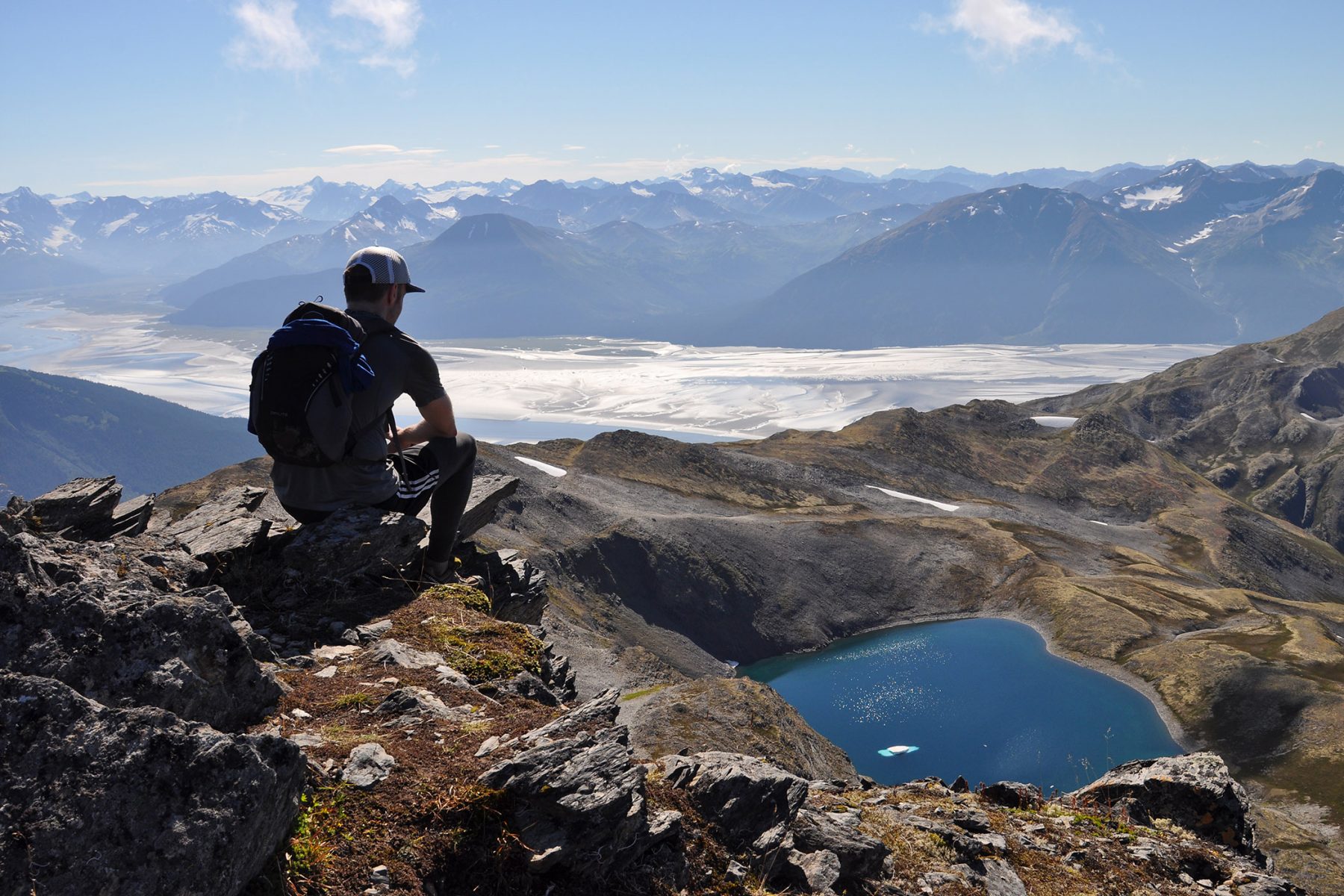 Matt Bergt sitting on the summit of Gentoo Peak, which marks the Girdwood end of Penguin Ridge. The small tarn below Gentoo Peak is the only obvious and easily-accessible year-round source of water on the ridge. Later in the summer, bring lots of water or be prepared to hike off the north side of the ridge in search of small ponds and streams.

The Penguin Ridge route simply follows the crest of the ridgeline between Penguin and Gentoo Peaks, and would be difficult to lose unless you get badly disoriented in heavy fog. The route can be tackled either from the Penguin Peak end at Bird, or the Gentoo Peak end in Girdwood. Every trip report out there suggests starting from the Bird side, since you’ll finish the hardest part of the ridge first and you’ll be facing away from the sun. I’d generally agree. Nevertheless, many of the photos on this page were taken on a trip in which I did the reverse direction, so please keep that in mind. I’ll describe the route starting from the Penguin side here.

Both the trail up/down Penguin and the route up/down Gentoo are dead center in large avalanche gullies. Keep in mind that Alyeska, just a few miles from Gentoo, is one of the only downhill ski resorts in the world that starts at sea level, and often receives more annual snowfall than any other ski area in the United States. There is a lot of snow back here, and it takes a while to melt out in spring. Do not attempt this route if there is any avalanche danger. Late June to late September is probably an optimal window here. 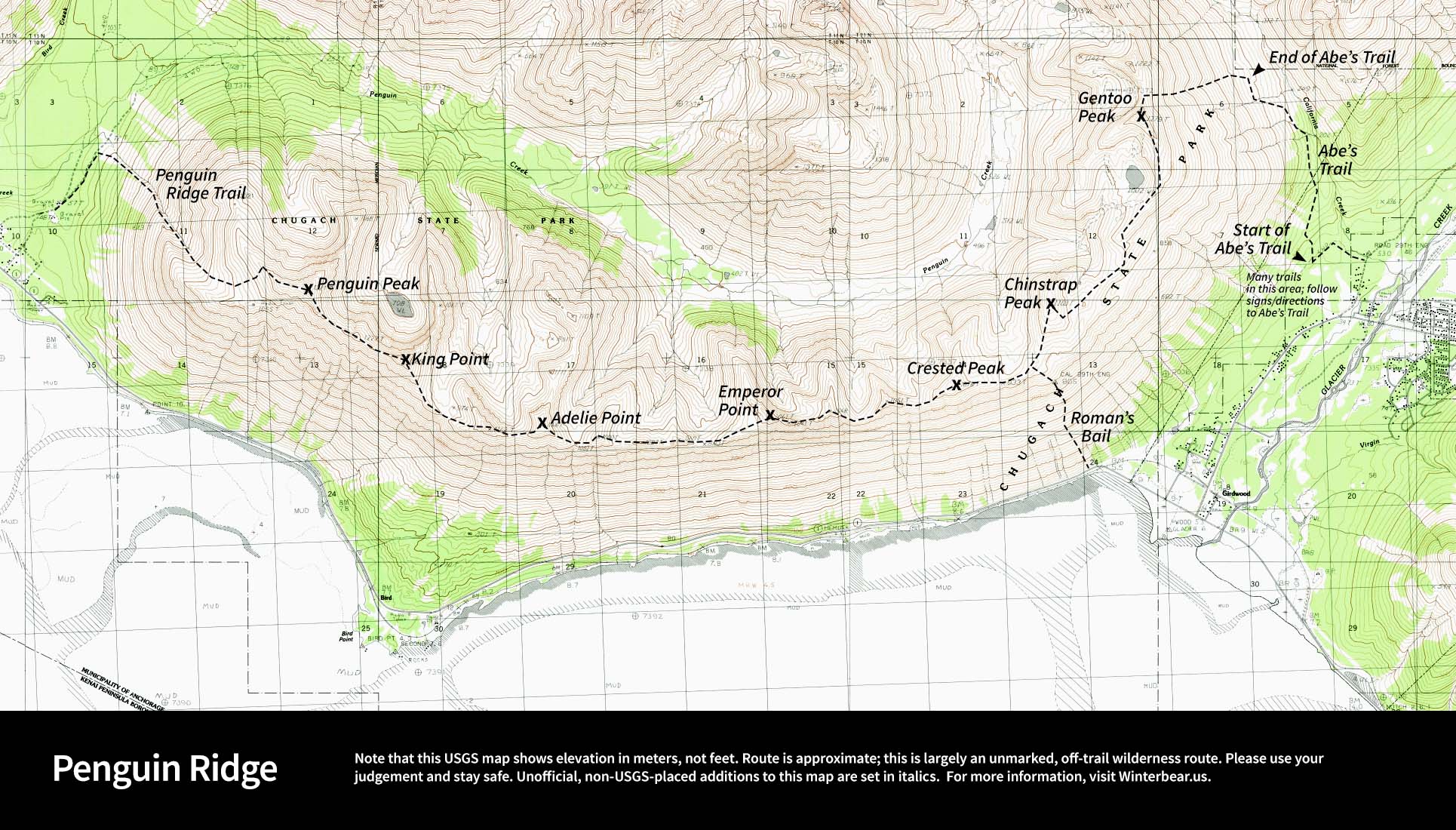 Map of the Penguin Ridge Route.

Ideally, run a two-car shuttle and leave one vehicle at the small, quasi-official trailhead where Crow Creek Road crosses California Creek. Then drive back down the Seward Highway and park at the large Bird Creek Valley Trailhead in Chugach State Park. Hike about one half mile up the flat four-wheeler trail, staying to the right at any major intersections/forks. The Penguin Peak Trail is signed; it intersects with the road/trail and climbs straight up the middle of the large avalanche gully. Some small human/game trails meander off of the Penguin Peak trail–just stay close to the middle of the gully and you’ll be fine. This trail is steep, brushy, and usually slippery. At about 2,000 vertical feet, the trail reaches the tundra and gives up. At this point, take whatever route you’d like over the open tundra toward the false summit at the top of the bowl, and then on to the 4,331-foot summit of Penguin itself. 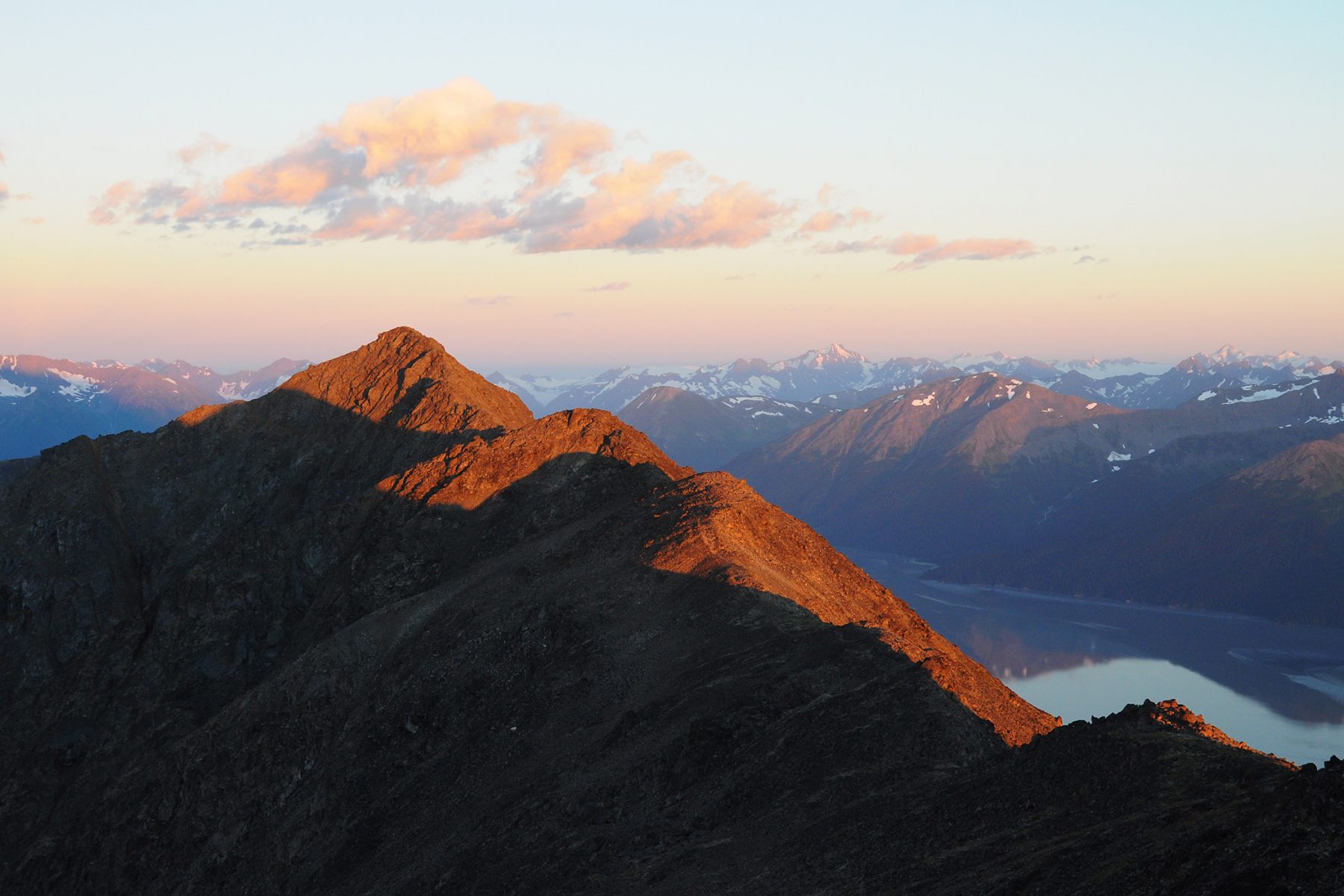 King Point, as seen from near the top of Penguin Peak on a warm September evening.

From here, you’ll have your first view of Penguin Ridge, though looking at it dead-on, it suddenly looks less like a ridge than like a jumbled collection of small tundra peaks. Any remaining illusion that this ridge is “pretty flat” will be discarded here. The section of the ridge between Penguin Peak and King Point is the hardest on the ridge, at least from a technical perspective. It includes some breif Class 3 scrambling, meaning that you’ll be using your hands but it shouldn’t feel like rock climbing. Even Chugach veterans might raise an eyebrow at the quality of rock in here–it’s notably papery, fin-like, and loose. But with a little care and patience, anyone comfortable with scrambling should be fine moving through this section. 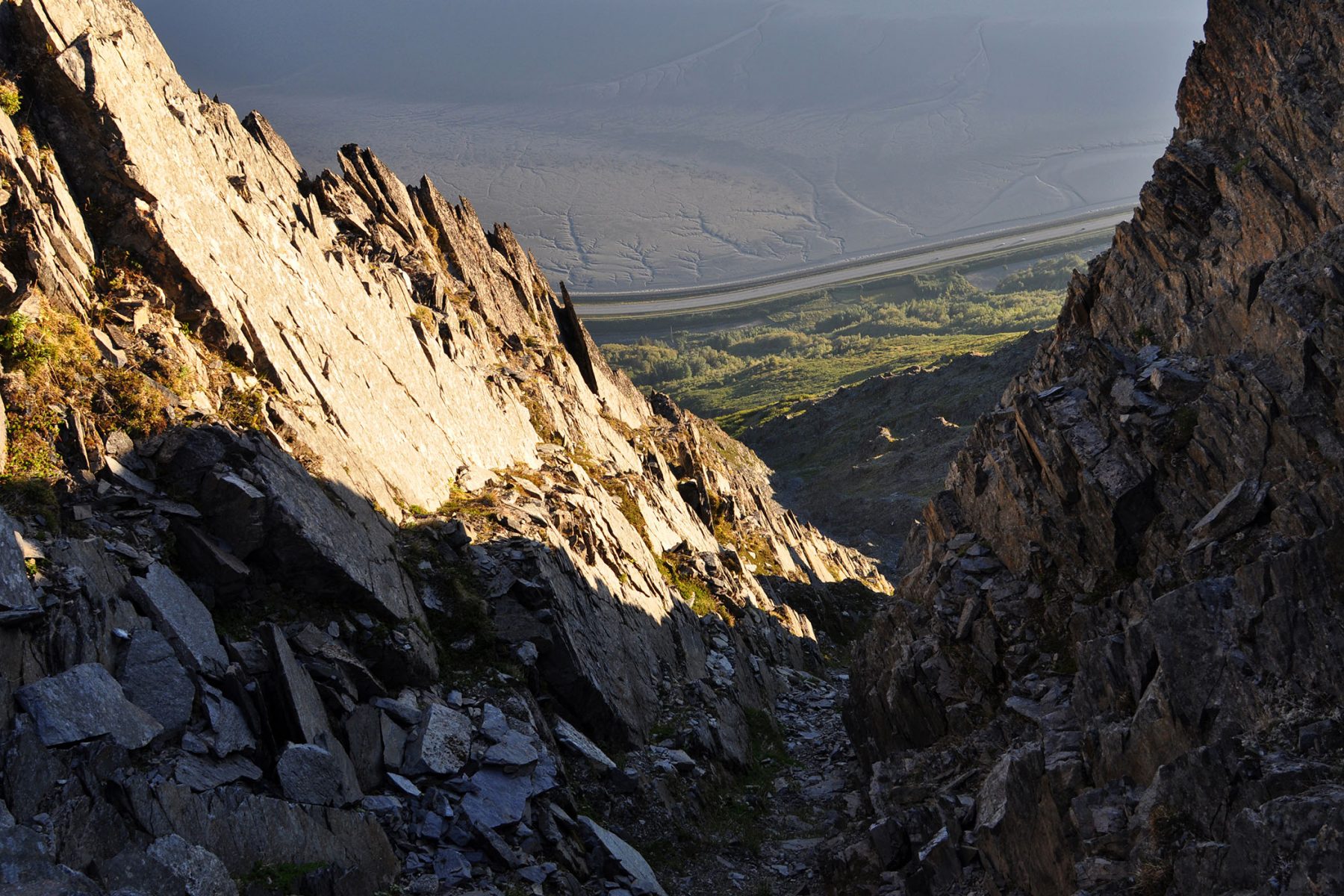 Looking down on fins of loose rock between Penguin Peak and King Point. From the spot where this photo was taken, it is nearly 4,000 vertical feet down to the Seward Highway.

The ridgeline from King Point all the way to Gentoo ranges between Class 1 and Class 2, with only a few moments of Class 3 depending on your route. There are many game trails following the passes and traversing around rocky points and peaks. In tundra passes, these game trails tend to coalesce into paths so distinct that they almost look maintained, but they will inevitably unwind and vanish over the next rocky rise. 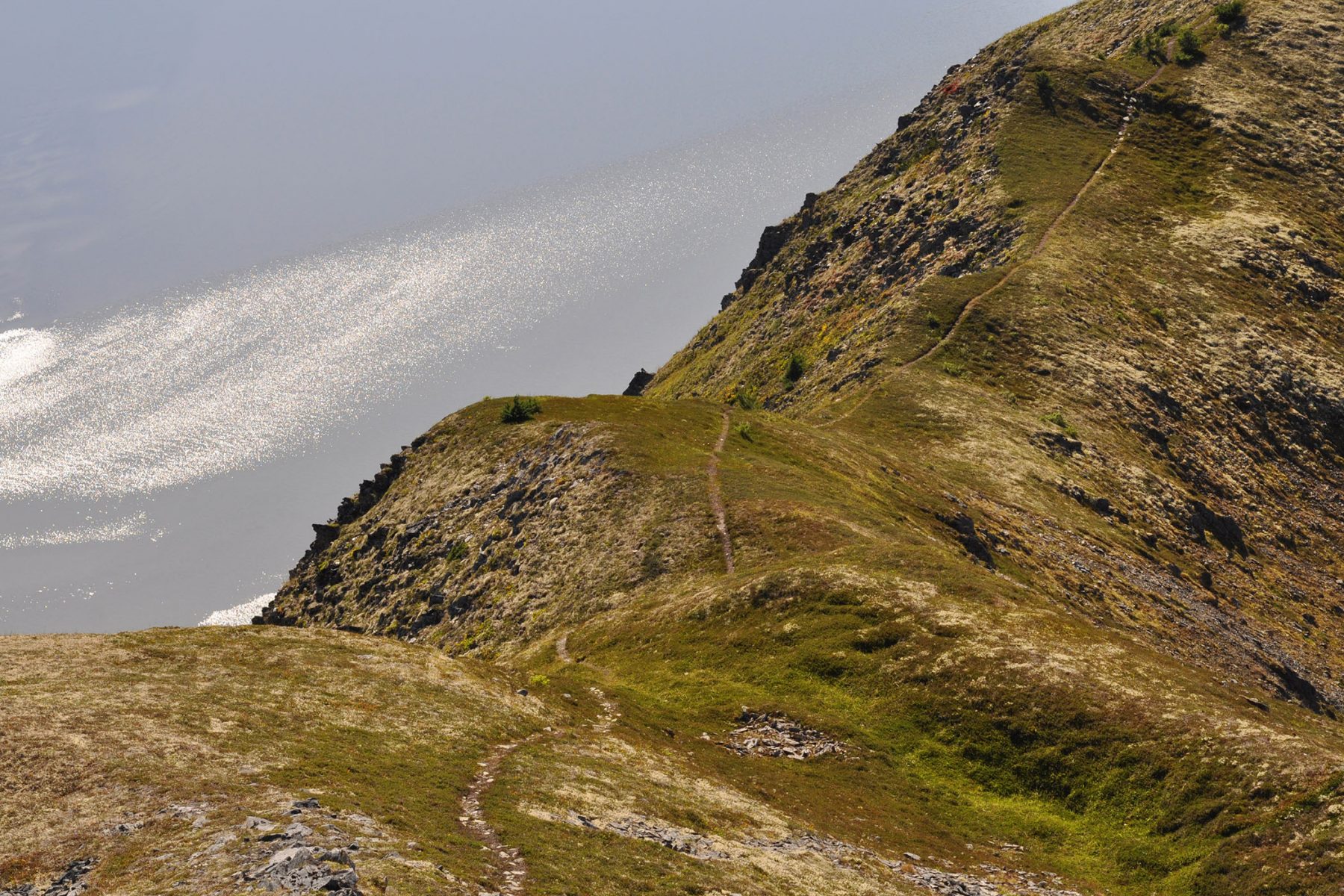 One of the more picturesque sections of winding trail on the crest of the ridge. This may look like a maintained path but the trail crews here walk on four legs. Their trails tend to be pretty short and sometimes dead-end.

Even though you’re tantalizingly close to the Seward Highway the entire way, bailing off of the ridge to the road would require about 4,000 feet of steep, very thick bushwacking or navigating steep, wet chutes. The foreshortening effect that makes Penguin ridge look flat from the bottom also makes it appear much shorter than it really is from the top. Even if you’re getting tired, it would generally be better to press on (or turn around) and leave the ridge via one of the trails on either end. A few trip reports describe descents down a steep, grassy chute and “meadow” above the Seward Highway where it swings away from the ridge near Girdwood. This is the route that Roman Dial describes in his original blog post on Penguin Ridge, and I’ve labeled the route “Roman’s Bail” on my map. Be forewarned though, that even Roman describes this route as “very steep,” and that’s saying something. Over at his writeup, Mike Records describes a harrowing 3.5-hour descent and says, in red text, “The descent is steep, filled with cliffs, and slippery. DON’T ATTEMPT UNLESS IT IS DRY.” It’s possible that Roman pioneered this route before the Abe’s Trail route off the back of Gentoo was established. Use at your own risk. 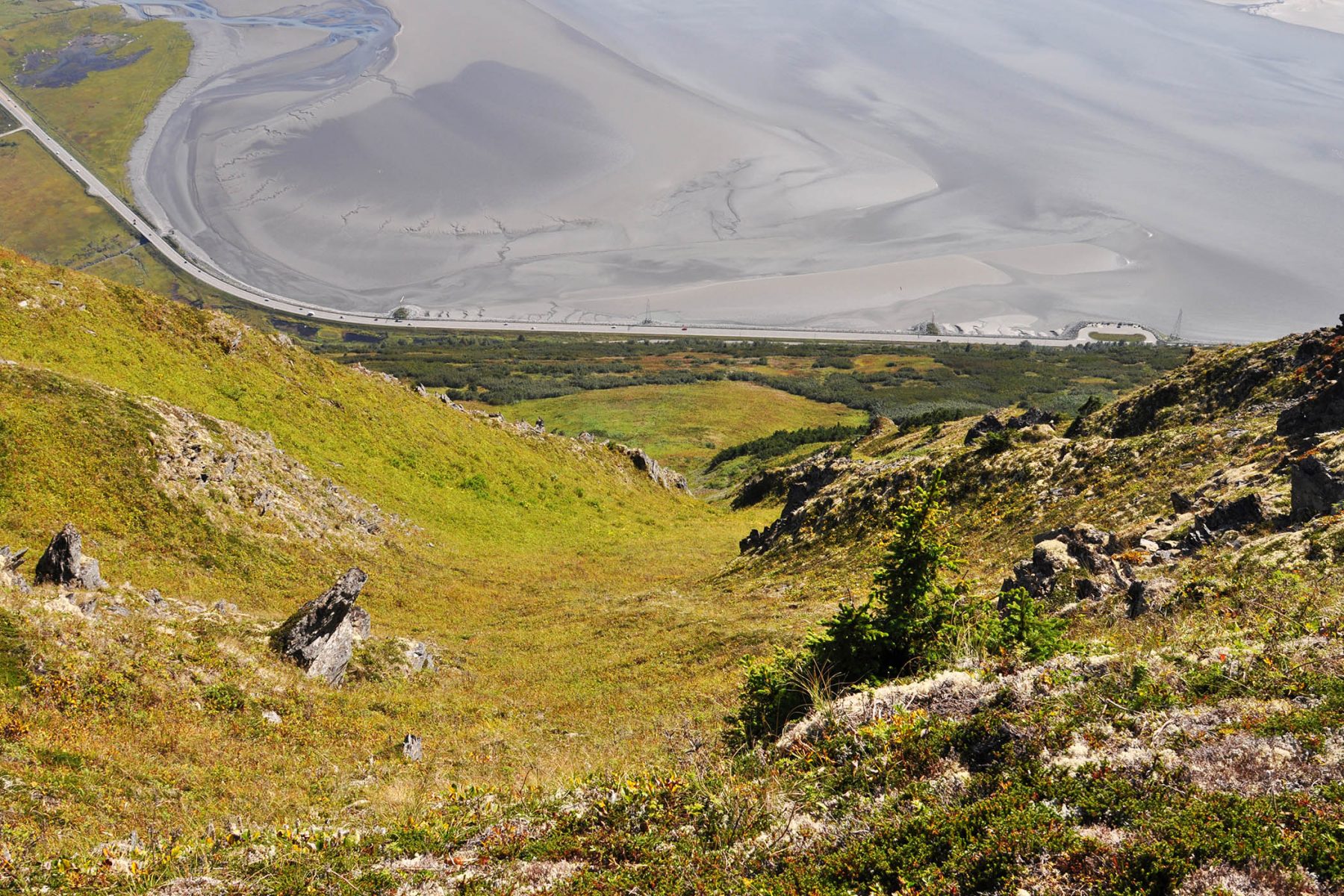 Looking down at what I believe is Roman Dial’s route off of Penguin Ridge. Though it’s located at a convenient point on the ridge, several sources emphasize that it is steep and difficult to navigate. Mike Records says “If this descent was wet it would be certain death, even dry it was slow and stressful. The dirt jammed deep under all my fingernails as I clawed my way down is a testament to this.”

By the time you reach the base of Gentoo Peak you’ll be tired, and you may be tempted to drop off the ridge early and bushwack to Abe’s Trail, somewhere down in the woods below you. Don’t do it. The brush around Girdwood is notoriously thick and after an hour or two of squeezing yourself through it, you’ll probably miss burning your thighs on the ridge. Gentoo isn’t as tall as it looks–push on over it, sign the summit register, and then head down into the col off the north side. Below the col, a steep avalanche gully will lead you all the way down to Abe’s Trail, which picks up right at brush line. As of this writing in 2016, Abe’s Trail seems to be something of a work in progress. It is faint but still distinct enough to find unless it’s covered in snow, and it becomes better and better-established as you head into the thick, mossy Girdwood forest. 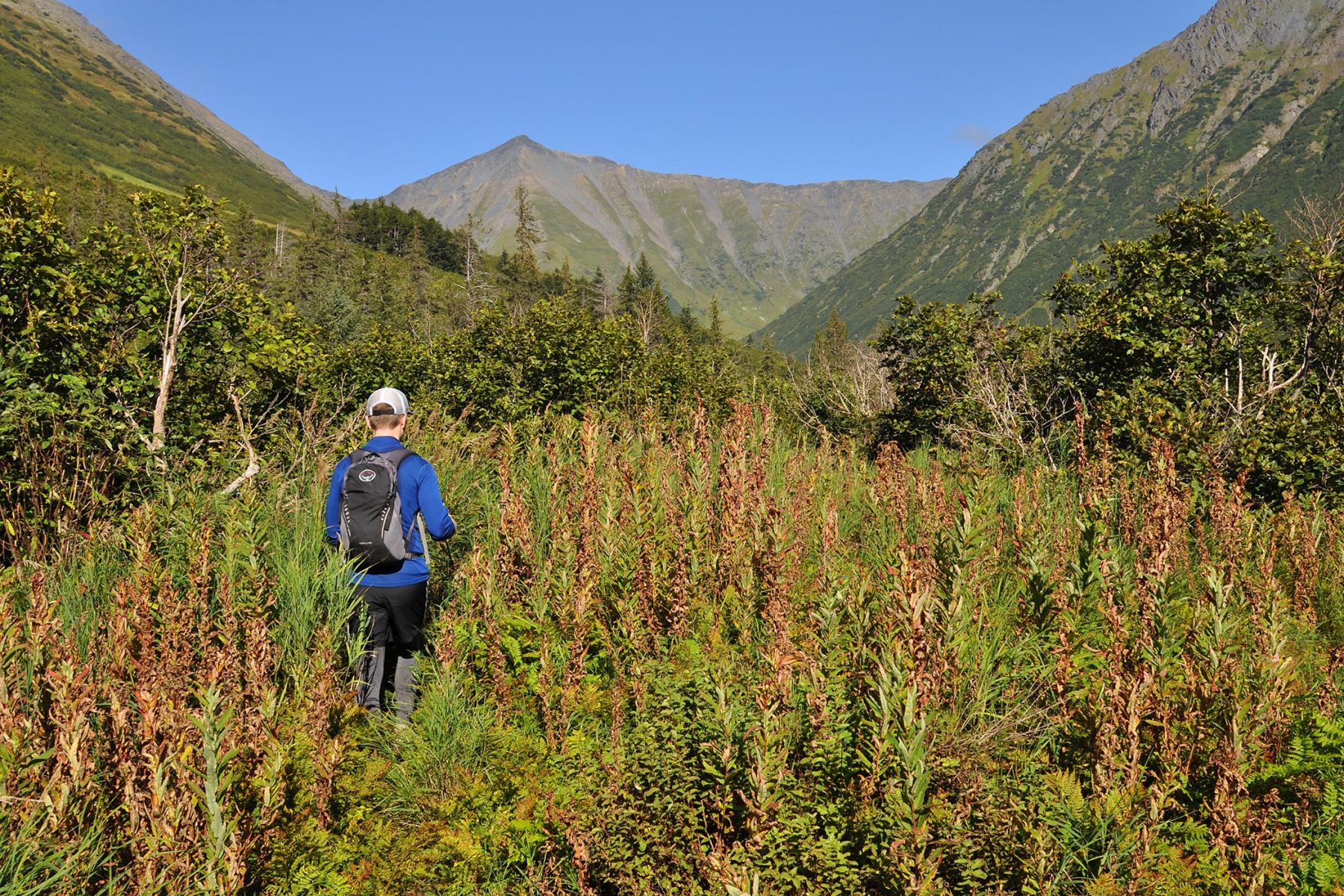 Abe’s Trail, looking up the valley toward a point informally named “Fishs Breath.”

You’ll end the trip at your car in Girdwood, exhausted but hopefully proud to have completed this classic Chugach traverse. If it’s not too late, grab a beer at the Sitz. You have definitely, definitely earned it.

There are a number of good trip reports and other resources online about Penguin Ridge.

How much water did you bring on the trip?

Good question Antonio. That depends on your hiking speed, personal needs, etc., but the biggest factor is the weather. On a hot midsummer day it wouldn’t be a bad idea to have 3 or 4 liters of capacity, and on a cool/cold shoulder-season day 2 liters might be fine. I would recommend carrying a small purifier like the Sawyer Mini so you can refill along the way.

Thanks for your trip report Paxson. A friend and I recently hiked Penguin Ridge and your comments were useful. I’d like to share our experience. My hiking buddy and I are in our 60’s, avid hikers in good condition. The traverse took us 16.5 hours. We moved at a steady pace stopping on peaks and other high points for snacks, water and short rest breaks. We badly underestimated how long the traverse would take us, so we were on top of Gentoo Peak as it was getting dark. Fortunately the weather was good and we both had headlamps so we… Read more »

Thanks for sharing your experience Mark. I’ve heard of several groups bivvying on the ridge because they ran out of daylight. It’s a long hike even for fit and experienced hikers. Glad you made it down OK! I’ve done Penguin Ridge twice in mediocre weather, once in fog and another time in fog with high wind and rain, which turned into snowfall as we crested Penguin Peak in the dark. I totally agree with you that this is a hike best saved for a sunny (or at least sunny-ish) day.

wow that’s an awesome write up, thanks so much for taking the time to capture and share all that!

No problem, glad it was helpful!

anyone attempted or completed the traverse in winter? cheers