If you asked people what the largest cities in the US are, few would guess Anchorage. But there it is at #4–at least, if you’re going by land area alone. By the same token, nobody would ever claim that McHugh Peak, which borders south Anchorage at the southwest corner of Chugach State Park, is the “largest” peak in the Chugach. It’s nowhere near the tallest or most difficult, but by land area it’s a sprawling giant. Its southeast ridge steps steeply into Turnagain Arm, its north ridge reaches toward the south face of Flattop, and its eastern ridge winds all the way to Rabbit Lake below the Suicide Peaks. Its western flanks enfold several of South Anchorage’s hillside neighborhoods and don’t flatten out until they reach the New Seward Highway. This expansiveness and proximity to Anchorage make McHugh an excellent choice for easy day trips, afternoon berry-picking jaunts, long ridge walks, and rocky scrambles. In the winter, experienced outdoorspeople hike its wind-blown ridges and ski on its mellow north and west-facing bowls. 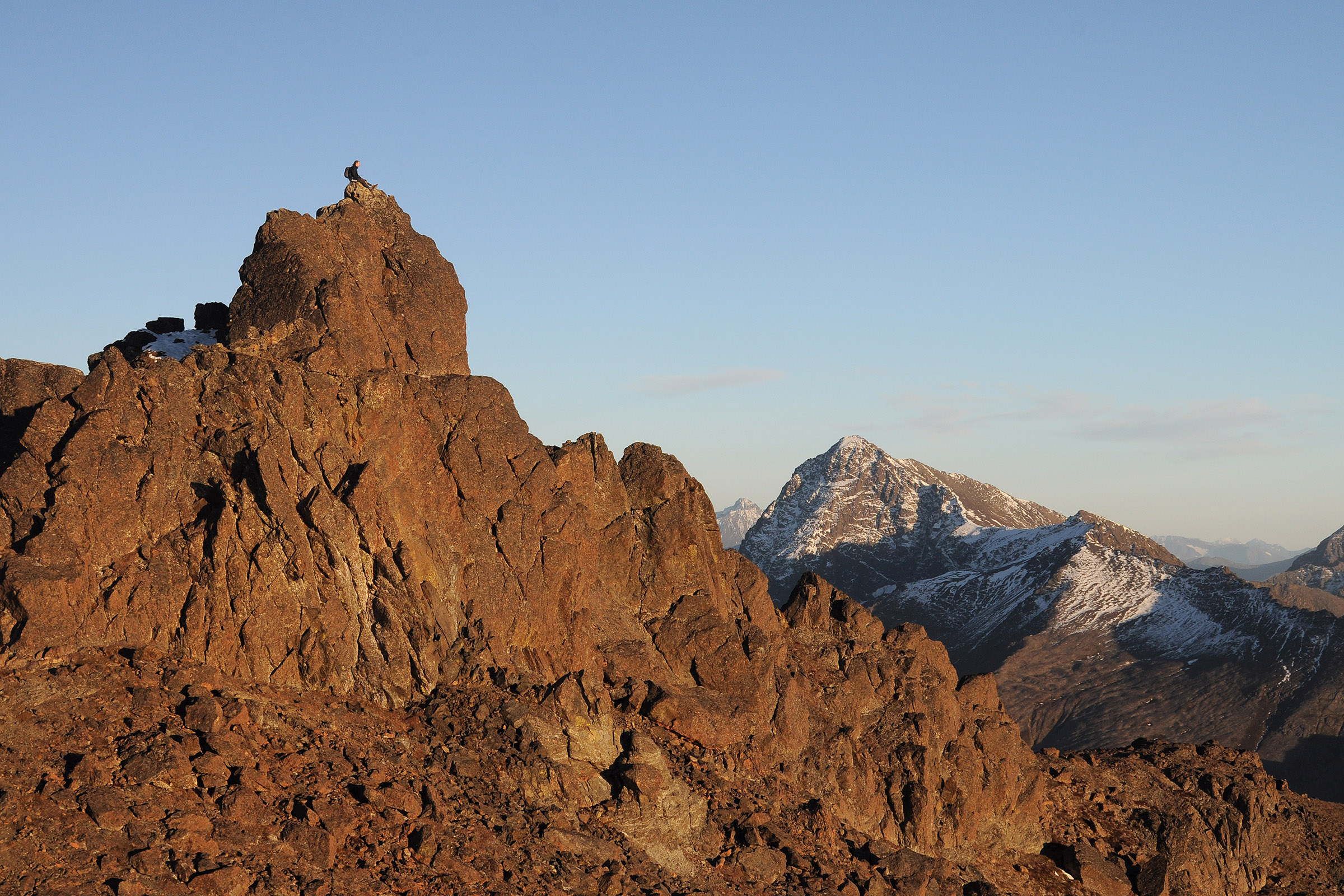 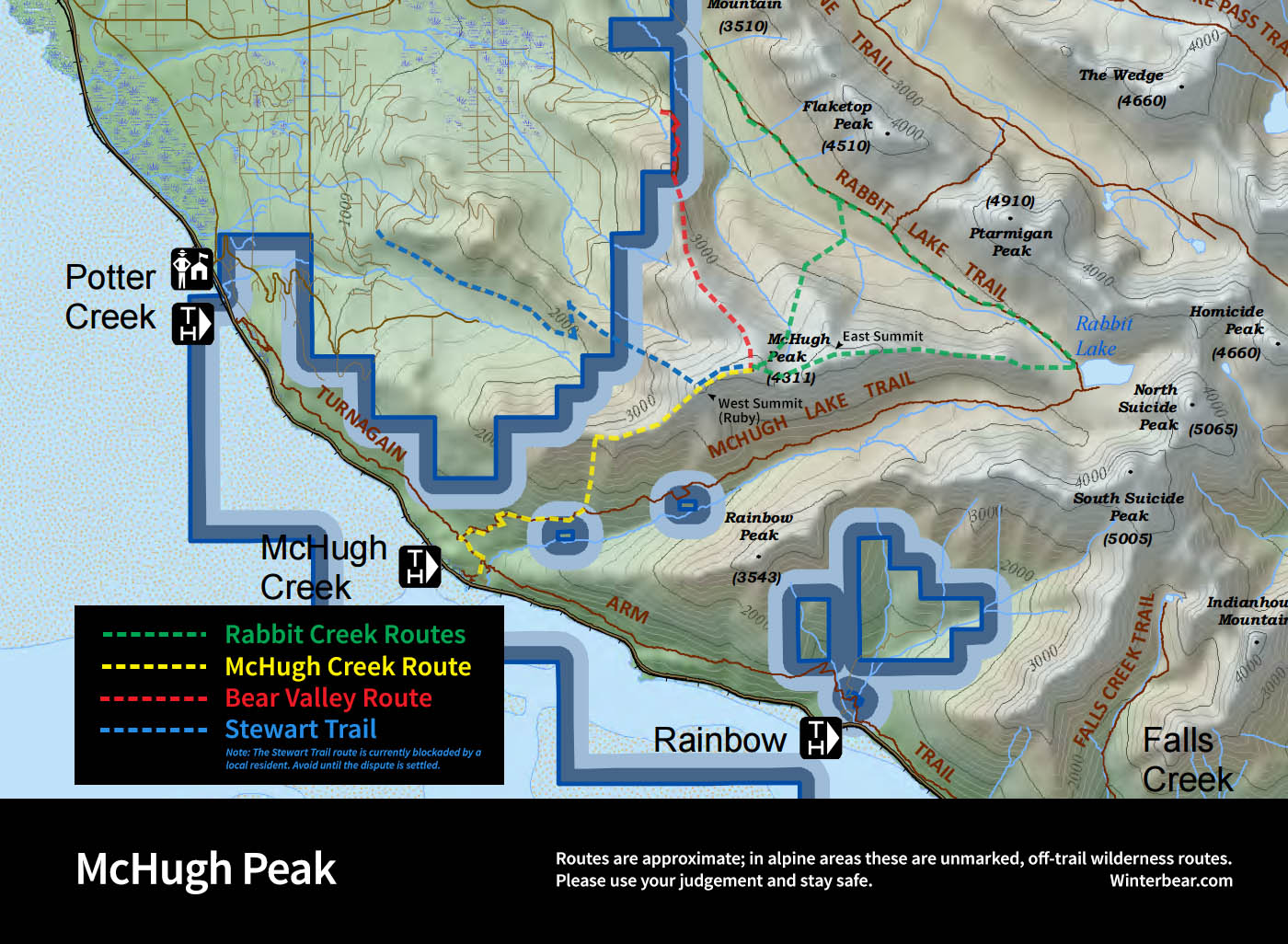 Map of McHugh Peak, with the three most well-known routes marked.

Starting in the late 1950s McHugh was typically accessed from the Stewart Homestead Road (also called the Stewart Trail), which leads to the peak’s northwest ridge. However, in 2015 residents Frank and Oksana Pugh erected a large metal gate topped with barbed wire to block public use of the trail. The City of Anchorage considers the Stewart Trail a public right-of-way and has repeatedly demanded that the Pughs remove the gate, without success. Groups are currently working to restore public access to this route. Until access issues there are resolved, use the signed public trailheads to avoid problems. If you do decide to bypass the gate and are confronted on the Stewart Trail, do not feel pressured to sign any documents or agree to any demands. You are under no obligation to speak with anyone on a public easement, and use of a public easement is not trespass. The Anchorage Police Department does not consider use of the Stewart Trail to constitute criminal trespass and does not issue citations for use of the trail. 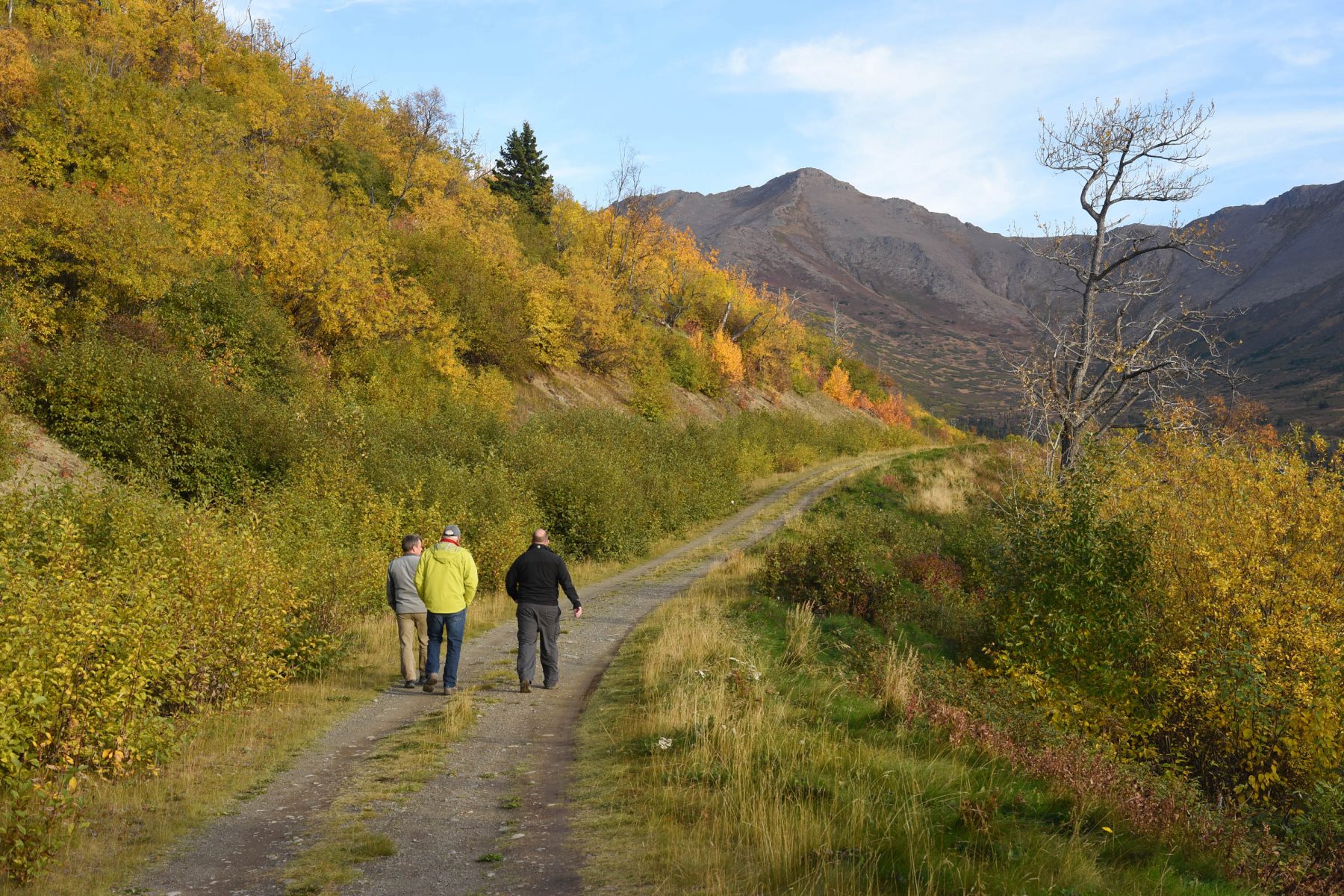 The North Ridge Route, starting at the Honey Bear Trailhead at the top of Honey Bear Lane in Bear Valley, is a fun Class 2 ridge walk with 2,300 feet of elevation gain and excellent views over Anchorage and across the inlet. Unfortunately, the most difficult thing about this route is parking: due to questionable city planning the cul-de-sac trailhead only has spots for five cars, parked tightly between two signs. Those who park on nearby streets risk tickets from APD, though enforcement is uneven and the legality of the “No Parking” signs and tickets has been questioned. There is also overflow parking on Honey Bear Lane on a widened stretch of road about two thirds of a mile below the trailhead. But if you’re hoping to score a prime parking spot, this trailhead is best tackled on weekdays or in the off-season.

From the trailhead, the clearly-signed trail begins at the parking lot and switchbacks through dense alder toward the broad shoulder of McHugh’s north ridge. After a third of a mile from the parking lot, the trail enters open tundra. Follow the trail or strike out and find your own way up to Point 3,200. This is the only part of the hike that can feel tedious, though the slogging is tempered by fantastic views up the Rabbit Creek drainage toward Ptarmigan and the Suicides. 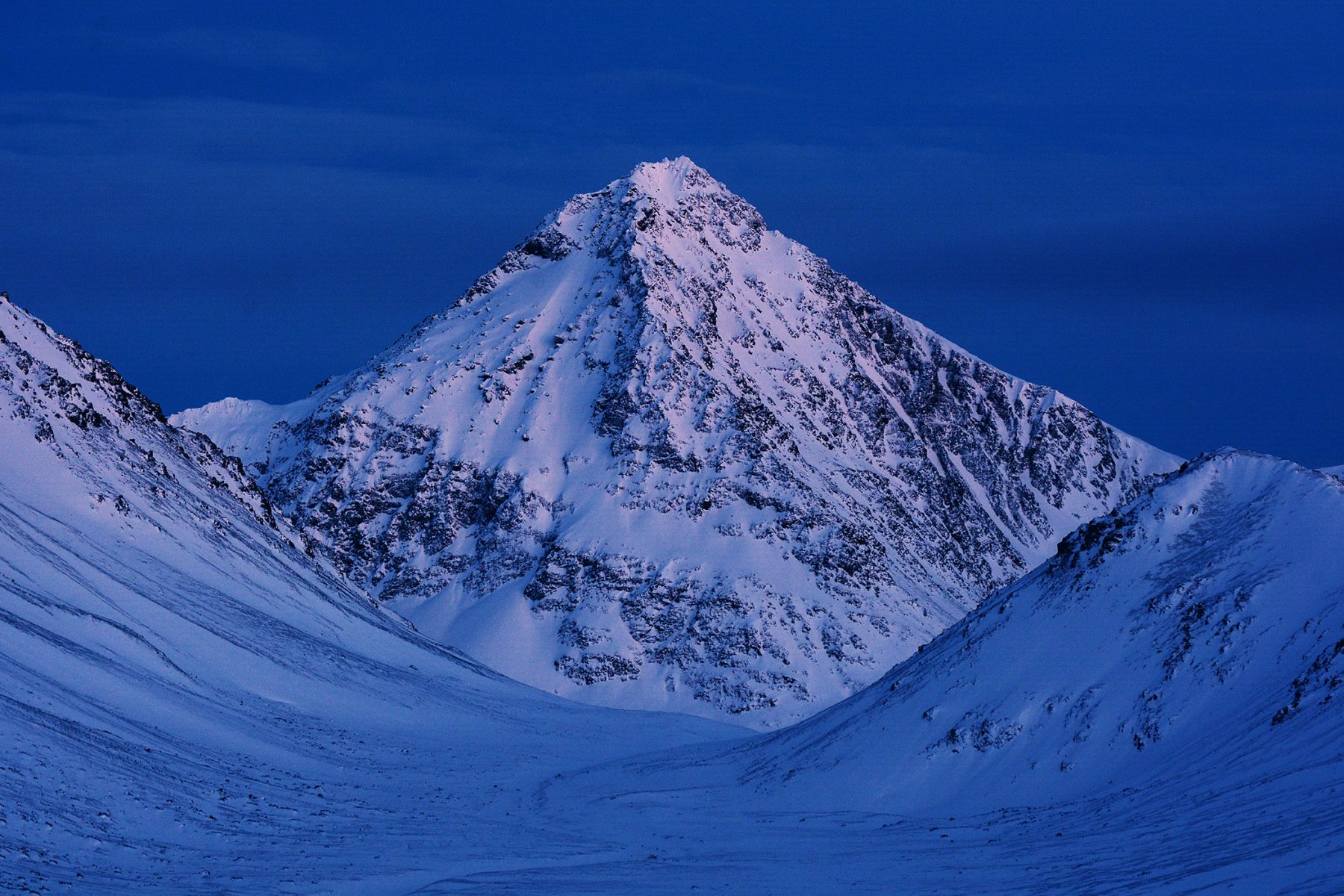 Midwinter view from the north ridge of McHugh Peak, up the Rabbit Lake drainage toward North Suicide Peak

From the top of Point 3,200, follow the crest of the ridge 1.9 miles to the summit of McHugh. The wind-swept tundra and rocky ridgeline is easy to follow and runs at a relatively shallow angle, though there are two prominent notches during which you’ll lose (and regain) about 150 feet of elevation each time. This ridge is well-traveled and there is an informal trail running along it most of the way. At the last rocky point before the summit, the trail disperses onto a broad face that sweeps up toward McHugh’s craggy crown. 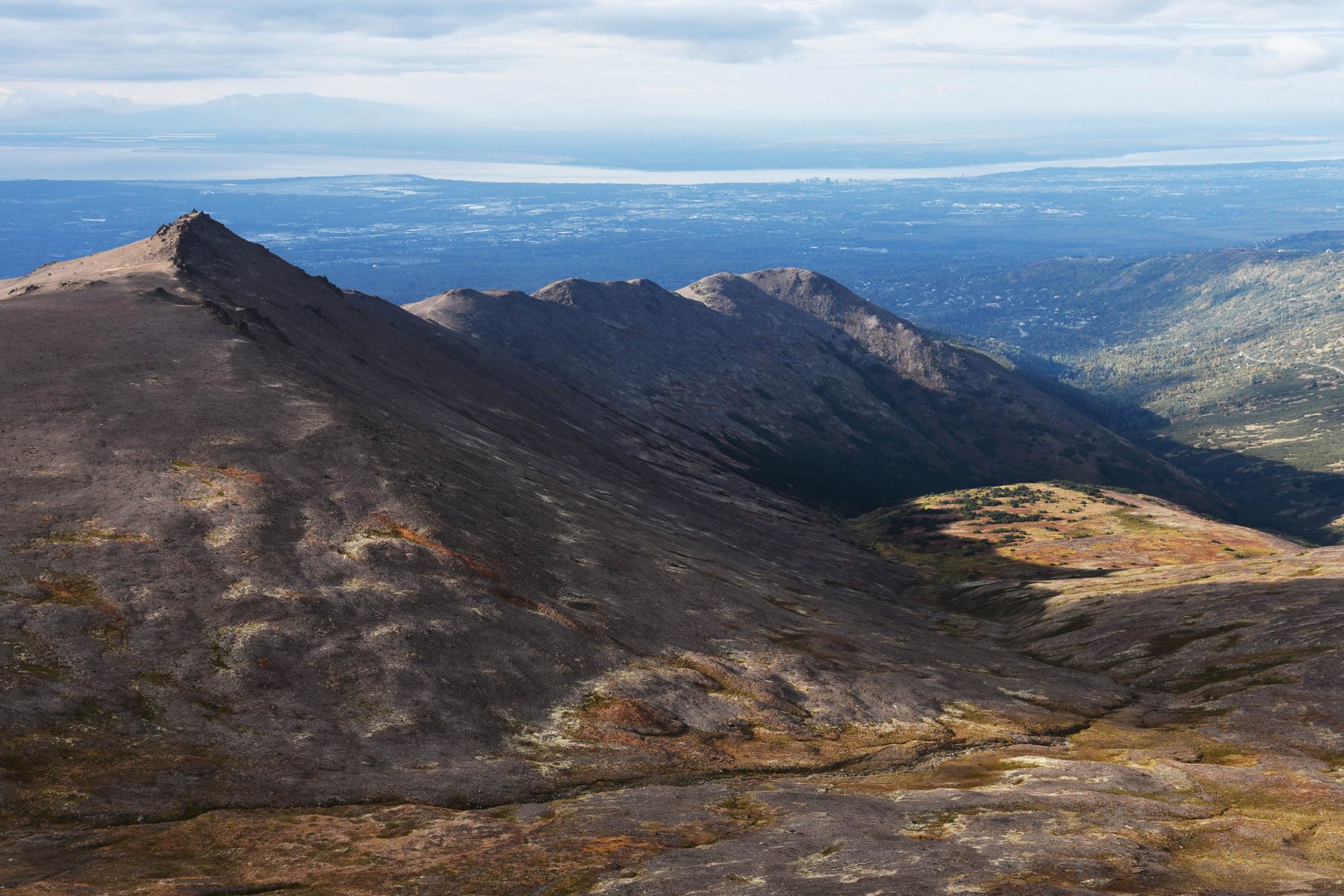 The north ridge of McHugh Peak. The summit is out of view to the left.

While the Bear Valley route up McHugh is just an adventurous Class 2, the final few feet to the true summit qualify as Class 4 (light rock climbing). The crag is climbed from the north side via an obvious, well-worn route that ascends a steep grassy gully, traverses a few feet to the east and then requires a climb of about 8 feet up the final summit rock. Those with experience at a rock gym might wonder what all the fuss is about, but caution would still be wise. There is certainly exposure, and a fall from the summit rock could be severely injurious or fatal. 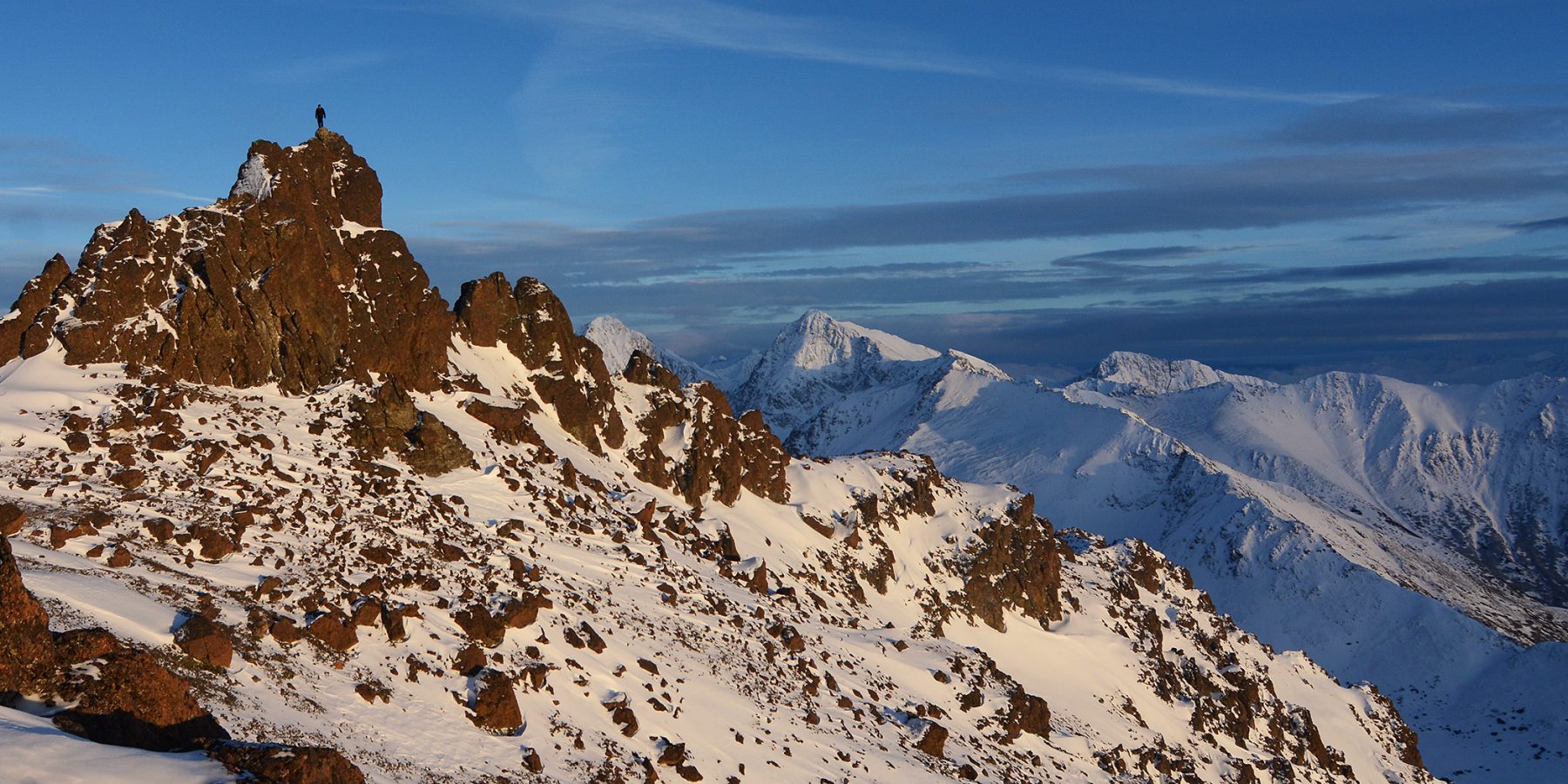 The summit of McHugh Peak in mid-February, with North and South Suicide Peak in the background. Though McHugh peak is mostly an alpine walkup, negotiating the bundle of rocks on its summit can be tricky and feels more like rock climbing than hiking.

The Rabbit Creek route combines a fast approach, breezy backcountry travel on open tundra and–perhaps best of all–adequate and uncontroversial parking at the Rabbit Lake trailhead. It requires only a bit more elevation gain than the north ridge route (2550 ft. vs. 2320) and far less than the McHugh Creek route (4,300 ft). For the most part the Rabbit Creek route is truly a route and not a trail, so it is most appropriate for those with basic routefinding skills and at least a mild sense of adventure.

Brett Woelber on the summit of Ptarmigan Peak, with the west ridge of McHugh Peak rising out of the clouds in the background.

To access the Rabbit Creek route, park at the Rabbit Creek Trailhead at the end of Canyon (Upper Hiland) Road. This trailhead lacks the signage and trappings of most Chugach State Park trailheads (including the parking fee!), but it is an official parking area. If your car doesn’t have good clearance or if the road is in poor condition, park at the lower parking lot and walk the last few hundred feet to the gate.

The Rabbit Lake Trail is about as exciting as hiking on a road, which is exactly what it used to be. From the trailhead it beelines up the valley, staying a few hundred feet below brush line and only wobbling slightly as it crosses avalanche runouts. Though it is possible to bushwack across the valley toward McHugh at any point, the brush thins substantially in the upper valley and the Rabbit Creek ravine becomes shallower. At roughly the 2.5 mile mark, the Rabbit Lake trail reaches a high point below Ptarmigan Peak and then begins to descend slightly into the upper valley. Around this point the brush gives way to open tundra and cross-country walking becomes simple. The Rabbit Lake trail uncoils a little into multiple paths, though it remains easy to follow. 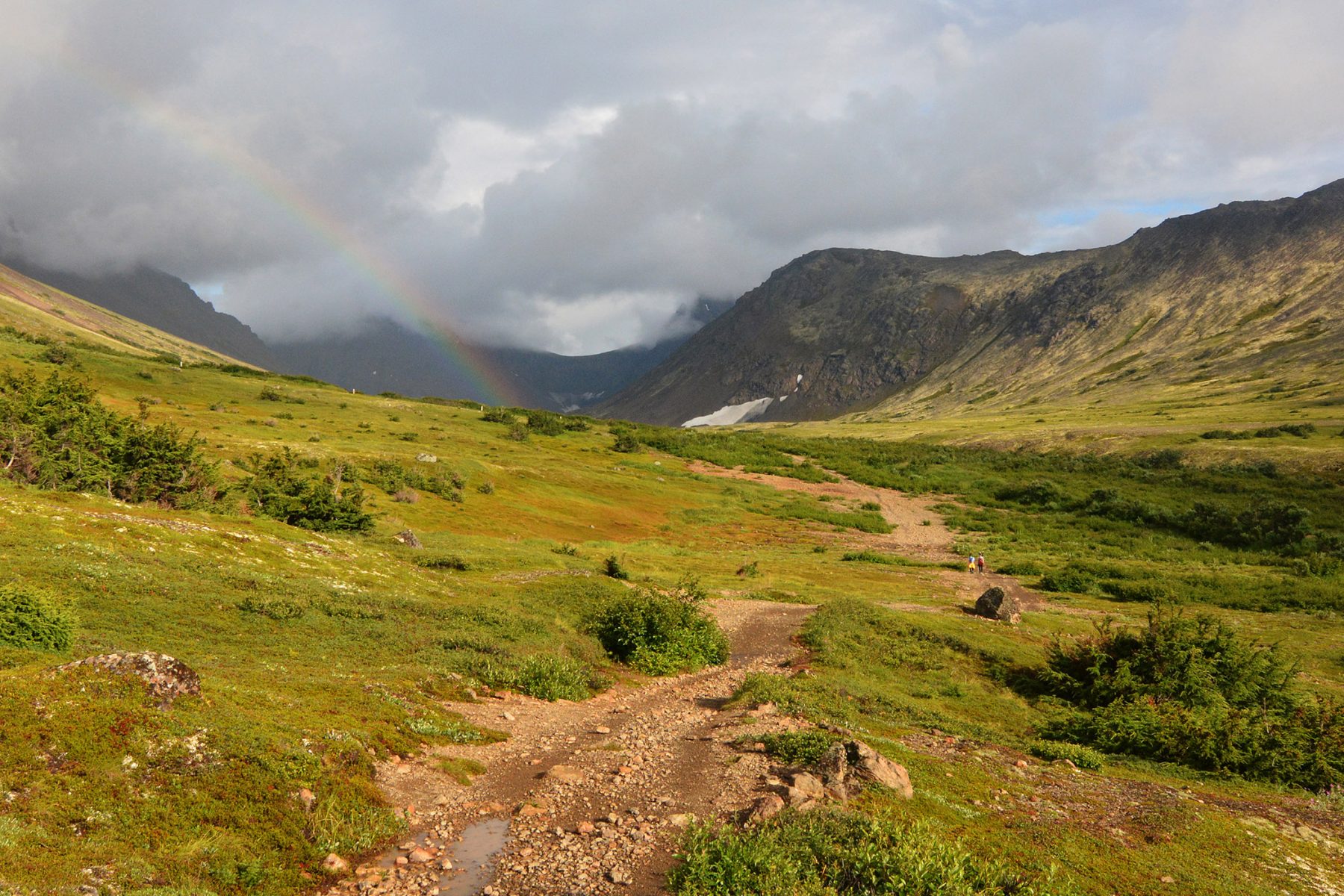 The Rabbit Lake Trail under Ptarmigan Peak. Note the line of old fenceposts visible right below the rainbow–these are a good landmark for when you might consider crossing the valley and heading up McHugh.

As soon as the tundra permits easy walking, cut south from the Rabbit Lake Trail, descend into the creek ravine and cross Rabbit Creek. The creek is generally low and easy to cross. On the other side, strike out across the open tundra and climb any of the slopes arcing upward toward McHugh Peak. The northeasatern bowls and ridges of McHugh Peak are wide and there are countless ways to move through them. 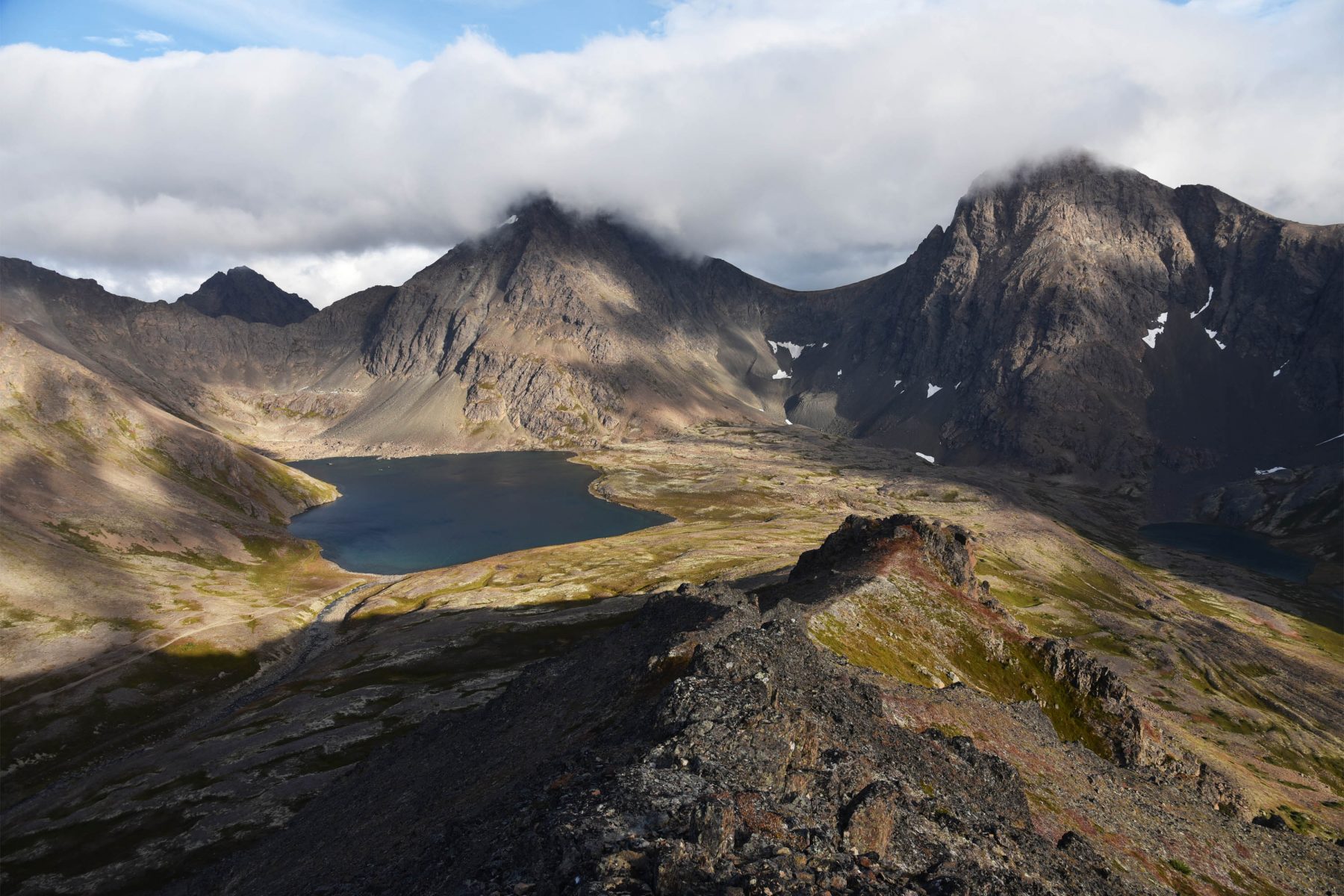 Looking down the east ridge of McHugh Peak toward Rabbit Lake and the Suicide Peaks.

The routes marked on my map are really just suggestions, and it’s up to you to find your way through this collection of shallow ridges, rocky outcrops, and tundra slopes.

Whichever route you take, you’ll end up on McHugh’s east ridge. It has a few outcrops that you may not want or need to climb over, but it’s generally easy to follow and fairly low-angle. Just follow the ridge west to the summit of McHugh. My notes on the summit pinnacle itself are in the Bear Valley route description above.

The McHugh Creek Route up the west ridge starts nearly at sea level and requires just over 4,300 feet of elevation gain to reach the summit–far more than any other route. But while this route adds some thigh-burning it also features more variety than the other routes: it starts in groves of huge cottonwood trees, winds through the brilliantly-colored site of the 2016 McHugh Creek wildfire, and traces the wind-blasted crest of McHugh’s west ridge to the summit of McHugh Peak.

Because it is south-facing in a high-wind area next to the ocean, this route is often fully snow-free as soon as early May. In fact, it is arguably the most reliable early-season hike in the Chugach, and is often snow-free long before traditional early-season hikes like Bird Ridge or Wolverine.

Drive the Seward Highway to the McHugh Creek parking area. There is ample parking here year round for $5 (or an annual State Parks Pass), and the trailhead is located at the end of the uppermost parking lot.

Follow the large-well-maintained trail about 400 feet until it intersects with the Turnagain Arm Trail. Turn left (northwest) onto the Turnagain Arm Trail and follow it about a third of a mile to the signed cutoff for the McHugh Lake Trail. There are many unofficial trails, game trails, and old inholding trails in this area. While they are fun to explore, unless you know the area well it would probably be fastest to stay on the main trail.

Partly because it becomes snow-free so early in the season, the McHugh Creek drainage is notorious for bear sightings and encounters. Make noise, carry bear spray, and follow other best practices for traveling in bear country.

At the signed intersection, cut right/northeast/uphill onto the McHugh Lake Trail. This smaller trail switchbacks uphill until it gets above the V-shaped cut bank of McHugh Creek and then parallels the creek all the way back to McHugh and Rabbit Lakes, beneath the Suicide Peaks. In 2016, a large wildfire tore through
portions of the McHugh Creek drainage, leaving a striking landscape of brilliantly-colored orange and green mosses between the charred, fire-sculpted trunks of burned trees. 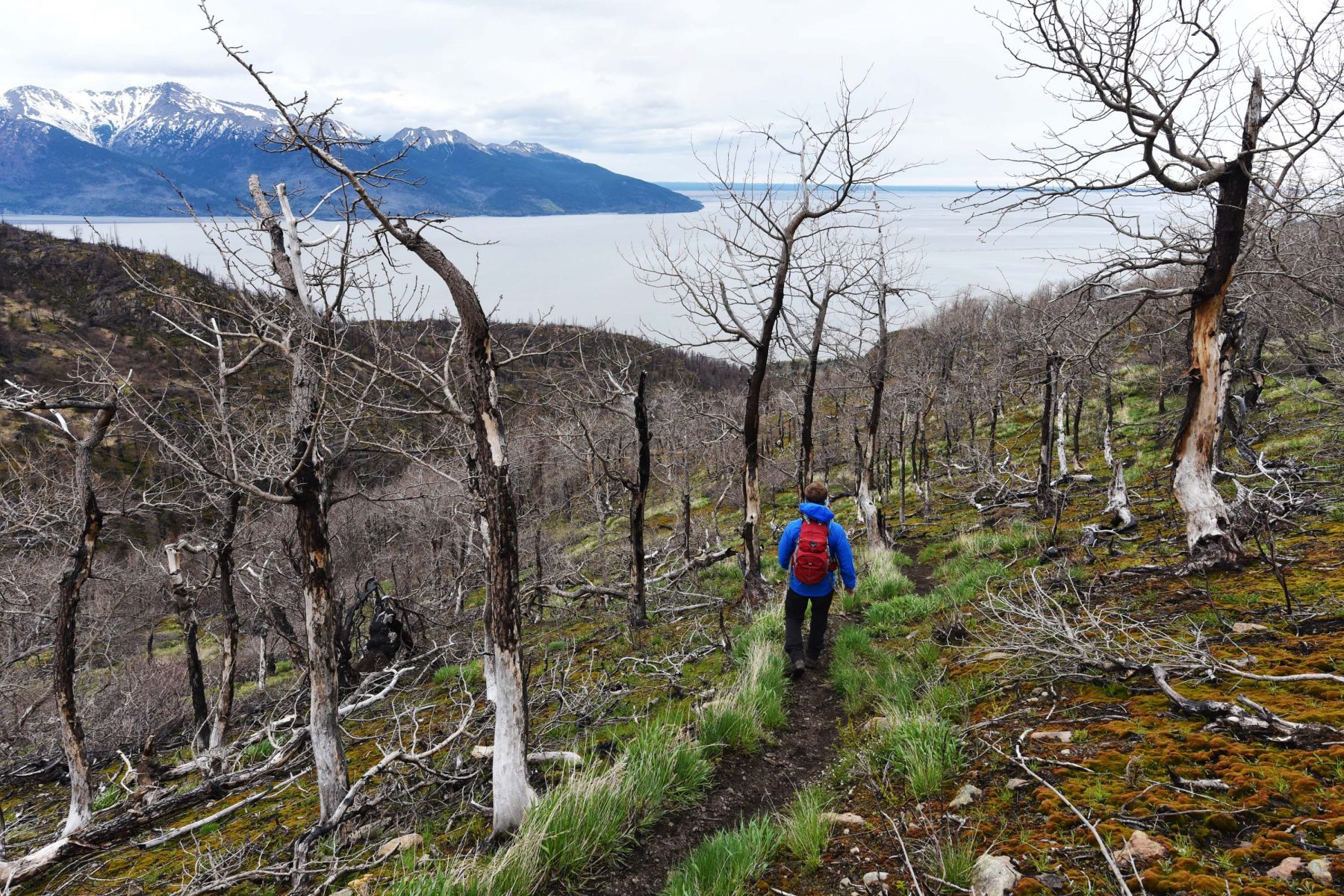 Brett Frazer hiking back down the McHugh Lake Trail toward the McHugh Creek Trailhead.

After about a mile and a half, the McHugh Lake Trail passes the base of a prominent rock and tundra gully with a small trail leading up it. This trail is not marked on official maps, but it is nearly as well-defined as the rest of the McHugh Lake Trail itself. Follow the trail .7 miles straight uphill to the ridgeline. Go off-trail as necessary or desired, but don’t get sidetracked by the many sheep trails cutting horizontally across the mountainside. Toward the crest of the ridgeline the trail gradually disperses and disappears into loose rock.

From the summit either retrace your steps or drop off the ridge to the south for a cross-country downhill to the McHugh Lake Trail. The brush on the south side of McHugh is not at all bad by Chugach standards, though the tundra and grasses can be steep and slippery.