Cantata is one of the most recognizable big peaks in the Chugach, rising to 6,390 feet at the head of the well-traveled South Fork Eagle River valley. If you do a lot of hiking in the Chugach, it’s one of those mountains that you see so much of that you eventually have to wonder is there a way up that thing? 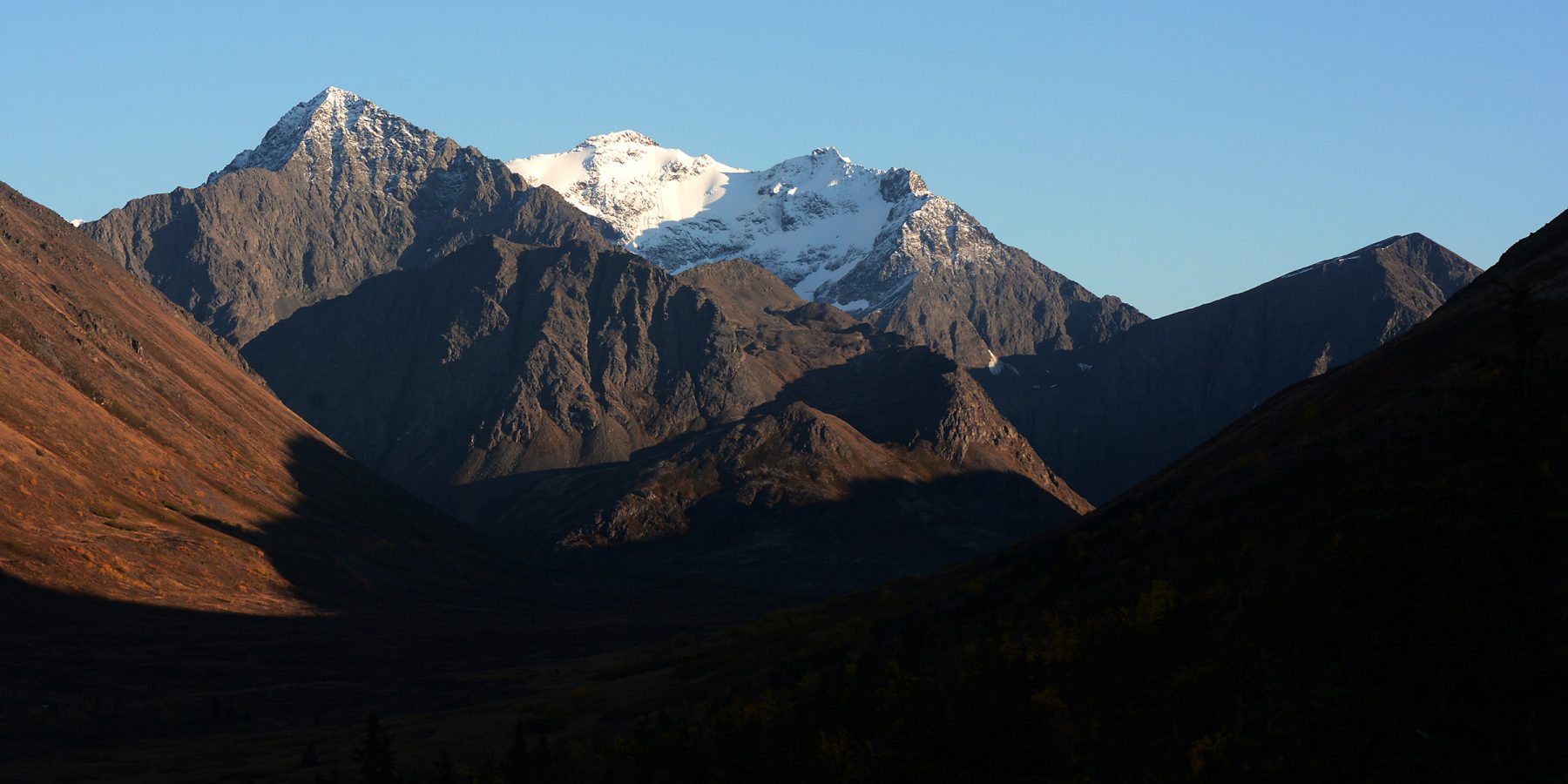 From left to right: Cantata, Calliope, and Triangle Peaks, at the head of South Fork Eagle River valley

The preferred route up Cantata has shifted over the years. The first ascent was a technical Class 4 climb up the southeast ridge. In 50 Hikes in Chugach State Park, Shane Shepherd and Owen Wozniak recommend threading through cliff bands on the SE face, above Mirror Lake. The west ridge route that is almost always recommended today is also, suspiciously, the most direct and therefore the one that should have been discovered first. So what took so long?

It’s easy to see why the obvious west ridge route was the last to become accepted: it looks nasty. Hiking toward the peak, the west ridge resembles a line of craggy battlements atop the immense wall of cliffs on Cantata’s north face. And the view never gets more reassuring: the very first step to tackling the ridge is a slightly unnerving sidehill around a set of 4th or 5th class crags. On a trip September 2016 trip up Cantata, as we crested the ridge to Point 4755 and Cantata’s west ridge came into view, one of our group was a little startled: “Are you sure this is the way?” 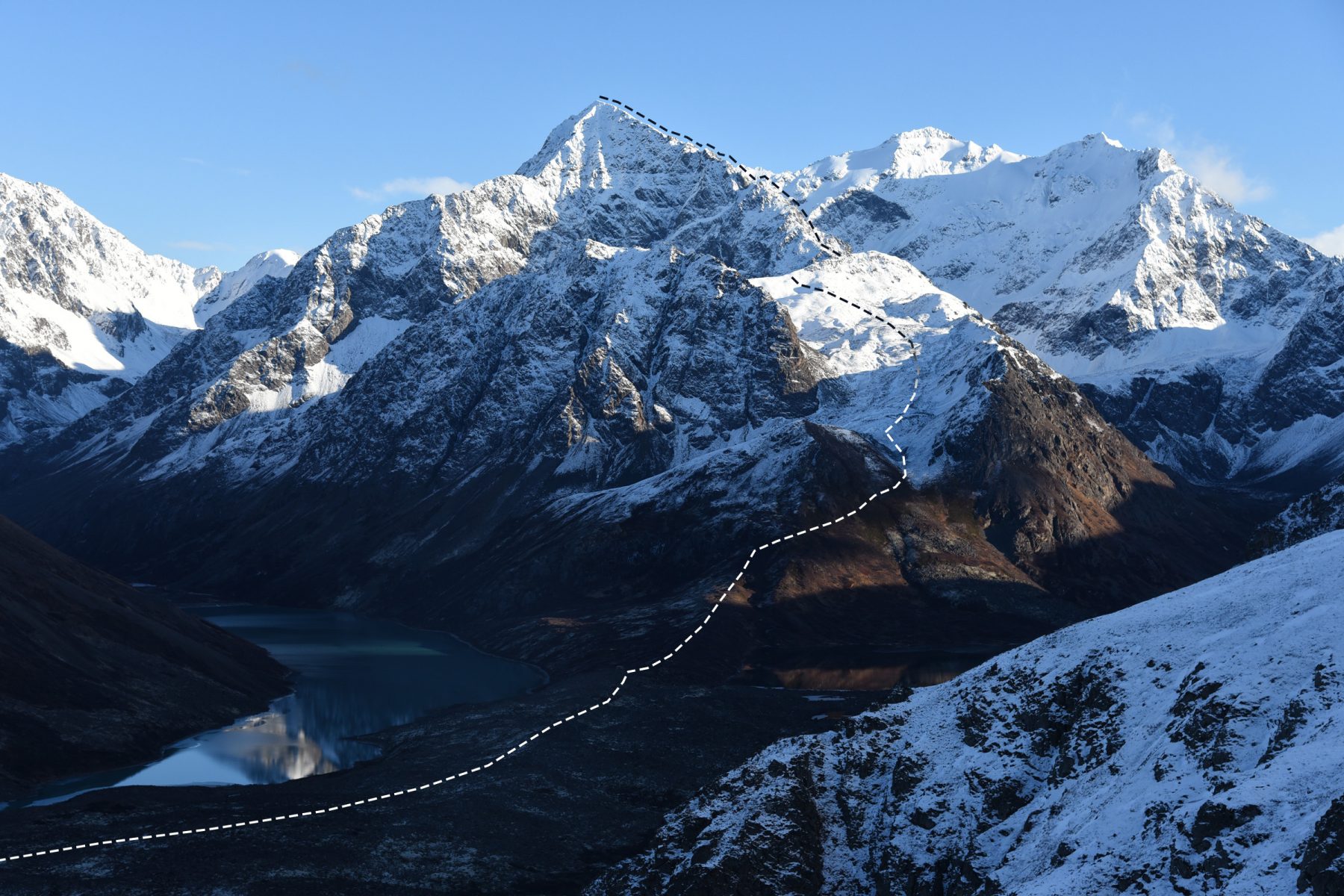 The approximate route up Cantata Peak, as seen from nearby Rendezvous Ridge. Note that the route is drawn above the skyline so you can see the topography on the ridge.

Honestly, yes. The route works, and if you do it right you will remain entirely in Class 3 (scrambling, but never rock climbing) territory. SummitPost’s official writeup of Cantata goes so far as to call the peak an “an easily attainable summit,” though I think that statement requires a lot of qualifications. There is plenty of tricky scrambling and some routefinding on the west ridge route, and getting off-route will immediately put you in Class 4 or 5 territory. While no single section of the route is too far beyond what someone might encounter on, say, the west ridge of Ptarmigan or North Suicide, Cantata’s general steepness, routefinding challenges, height, and remoteness demand an additional level of commitment. It is probably comparable in difficulty with nearby Eagle Peak, and overall significantly harder than Bold (minus the climb out of Stiver’s Gully). I would not recommend climbing the peak for the first time in fog/clouds (and never in the rain), and would leave at least a few hours of extra daylight at the end of your trip. I would also recommend wearing a helmet, especially if traveling with others.

The approach to the base of the peak is as straightforward as any in the Chugach. Park at the South Fork Eagle River trailhead and walk the excellent trail up the valley until it reaches the small bridge over Eagle Creek, at the outflow of Eagle Lake. 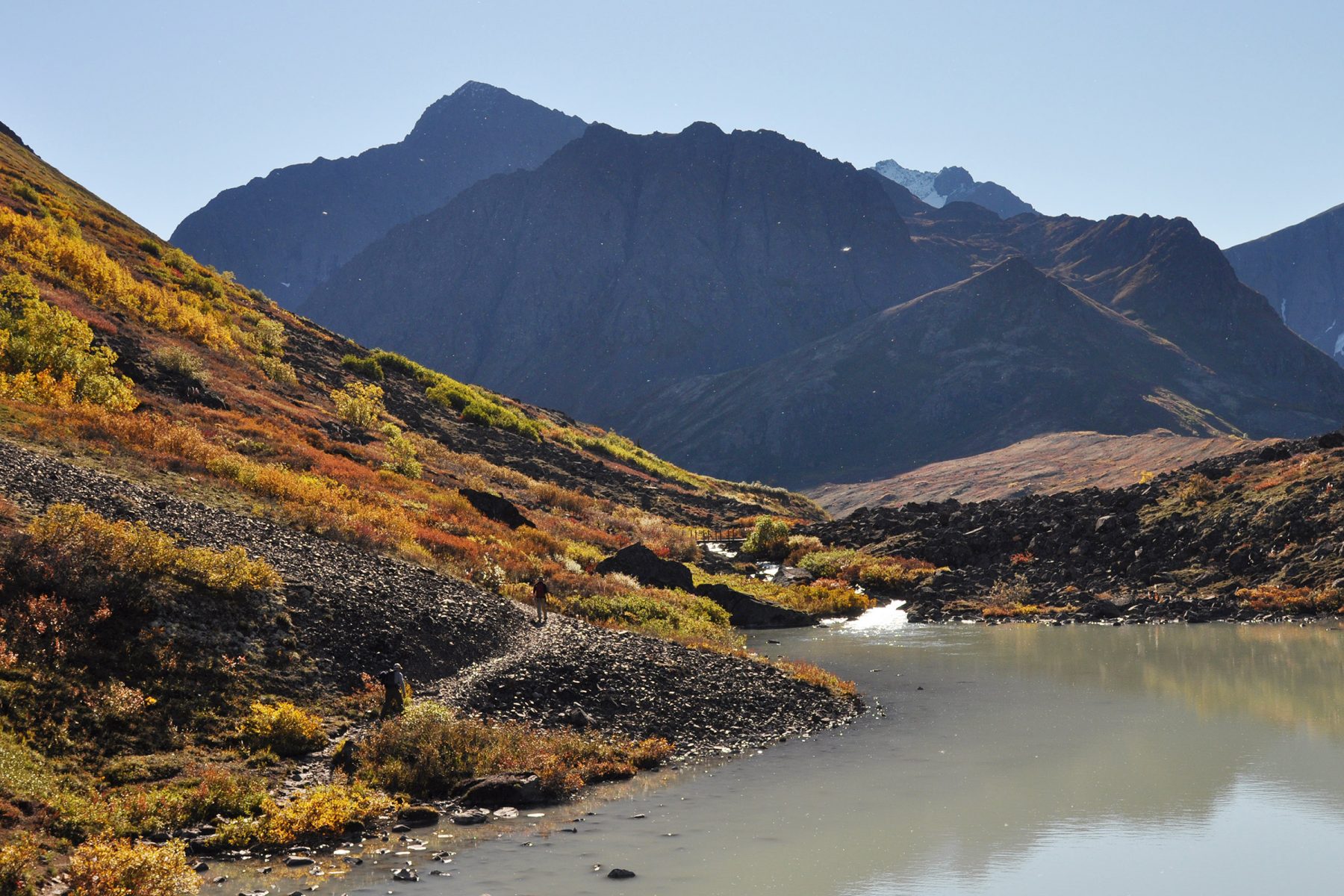 Reaching the bridge across the Eagle Lake outflow, on a fall day with fireweed fuzz filling the air. Cantata is in the background.

From here follow the light web of trails and cairns over the boulder field. A picturesque, winding trail picks up on the far side of the boulder field and ascends the crest of a tundra-covered moraine between Eagle and Symphony lakes toward Point 3800.

The moraine between Eagle and Symphony Lakes. It’s often said that these lakes are different colors because “Eagle Lake is fed by glaciers and Symphony isn’t.” As you’ll see when you climb Cantata, Symphony Lake is partially glacier-fed too; the small tarn between Cantata and Calliope, which feeds into Symphony Lake, is a brilliant opaque turquoise.

This informal trail splits toward the top of Point 3800, with one branch sidehilling to a small drainage to the west and another heading straight up to the point. It doesn’t matter which path you choose, and once you’re over Point 3800, the trails disperse and disappear anyway. Head up the gently rolling hillocks, tundra slopes, boulders, and snow patches toward Point 4755.

There is usually a small seep on the north side of this tundra ramp, and this will be your last opportunity to fill up on water. By late summer, however, even this water source may have dried up. If it has, you may have to descend all the way to Mirror Lake from the col between Point 4755 and Cantata. This would be a long way to go for water though (about 700 vertical feet), so I’d recommend potentially bringing a few liters all the way up to the top of Point 4755 if you have doubts. You can always stash the extra water to grab when you return.

Sidehill around the east face of Point 4755 on a well-defined hiker/sheep path, and walk the rocky ridge to the final col between Point 4755 and Cantata. 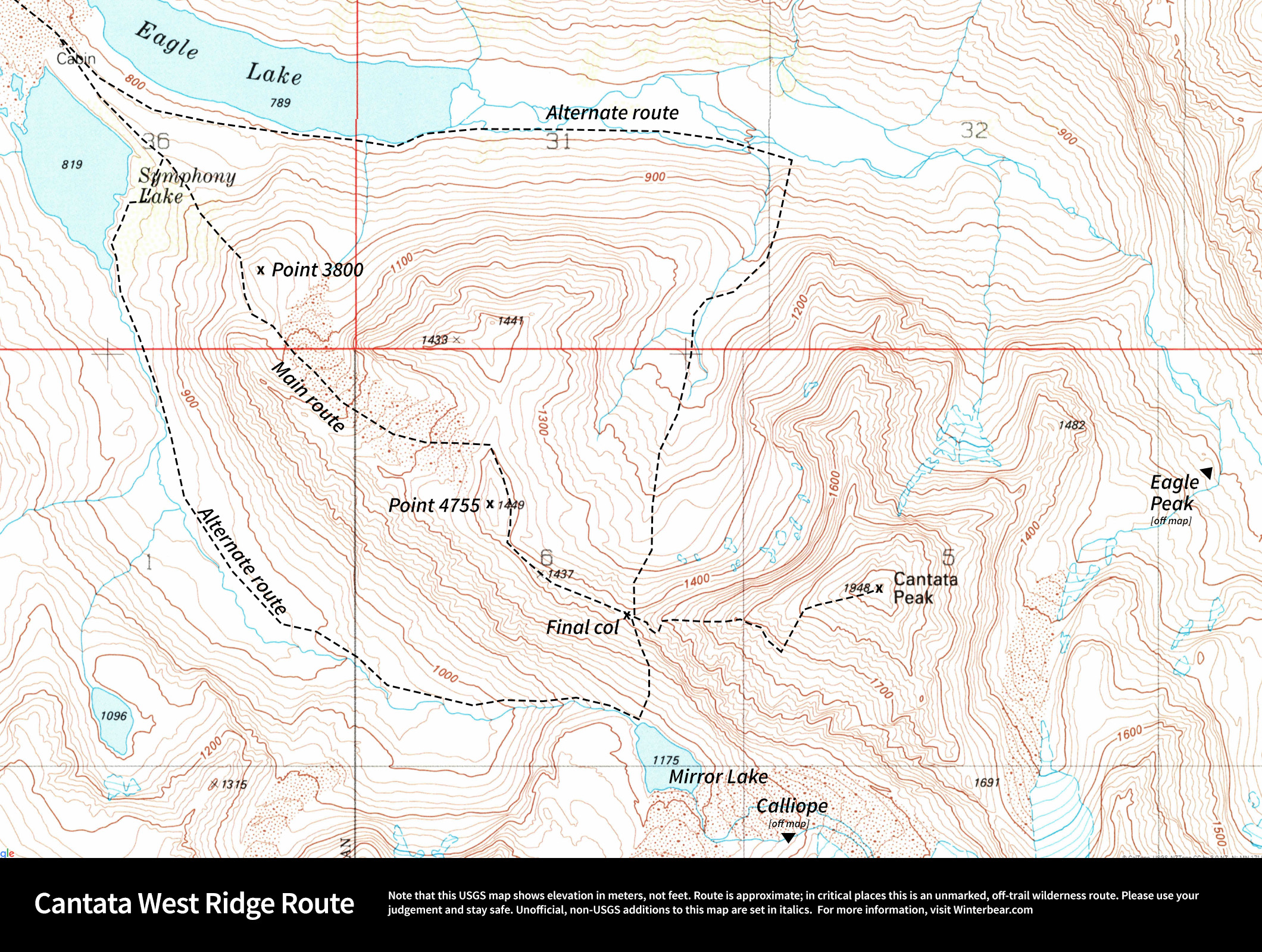 Annotated USGS map of the west ridge route up Cantata, showing both the main route and two approach alternate route. Note that the USGS map displays elevation in meters, though my annotations (for example, “Point 4755”) are in feet.

This is where the hike really begins. The gist of the west ridge route is that you’ll want to stay on the ridge as much as possible, cutting over onto the southern face only when you confront notches and cliffs. In some places there are footprints, though nothing that really rises to the level of being a trail. Cairns sometimes mark the way, though they are erratically placed and tend to disappear with winter storms and avalanches. Don’t ever traverse onto or above the extremely steep north face. 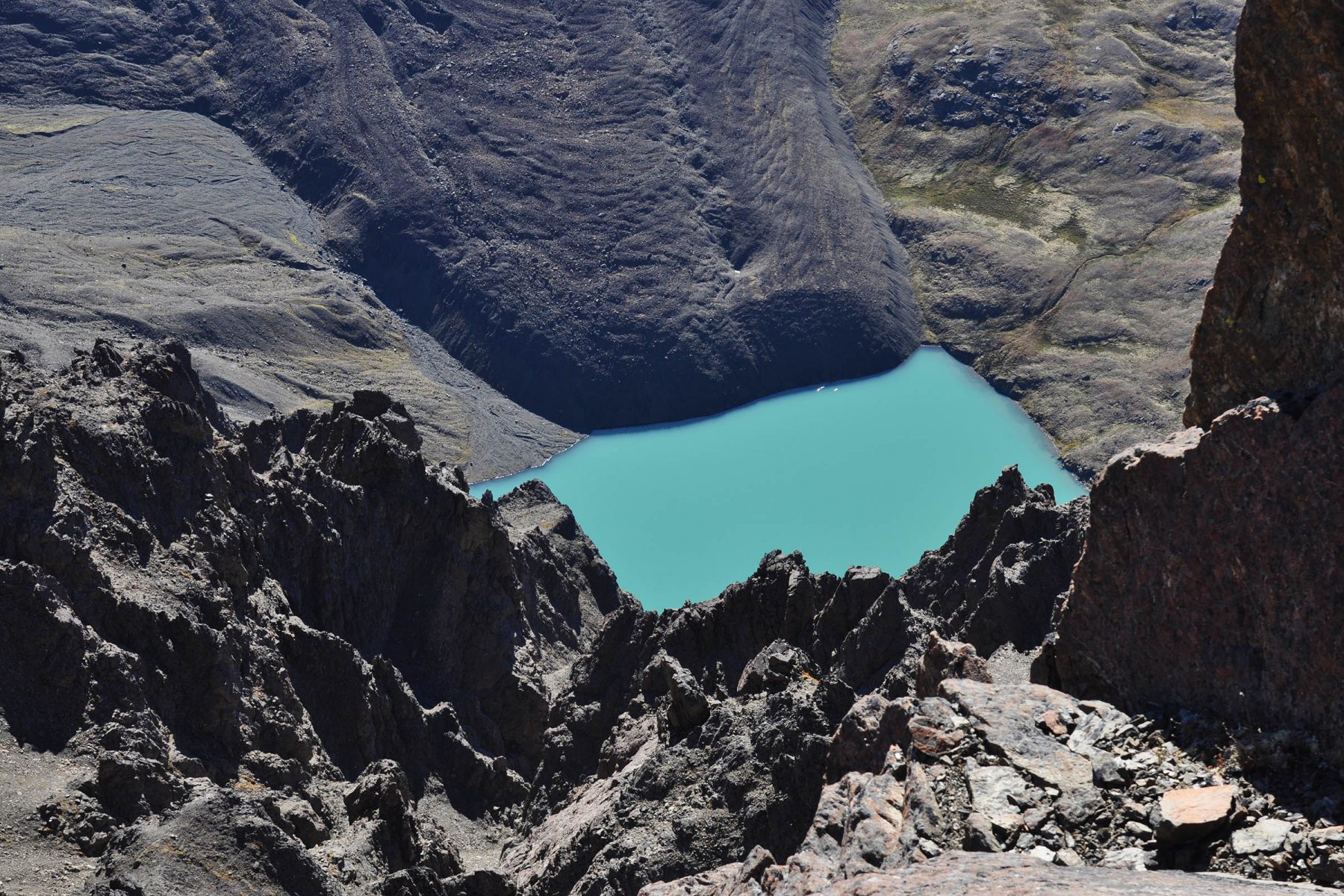 Looking down Cantata’s craggy south face onto Mirror Lake and the rock glacier.

The first impassable obstacle is encountered just a few dozen feet above the col. Move onto the southern face, following a light path that sidehills around a set of steep, rocky gullies. You won’t go too far–angle up the first prominent climbable gully, continue sidehilling briefly, and then climb up the first scree field back onto the ridge. This first set of maneuvers is a good test for the rest of the climb. If you don’t feel comfortable here, don’t continue. As a mountain runner on his way down the peak said to us “it doesn’t get harder but it doesn’t really get easier.”

Once you’ve regained the ridge, the terrain mellows slightly into steep Class 2+. You’ll switchback a bit on light paths as you gain a great deal of elevation. To anyone watching you from the col, it’ll look like you’re somehow walking up a cliff. This part of the climb ends at the top of a small false summit, after which you’ll lose sight of the col below Cantata. 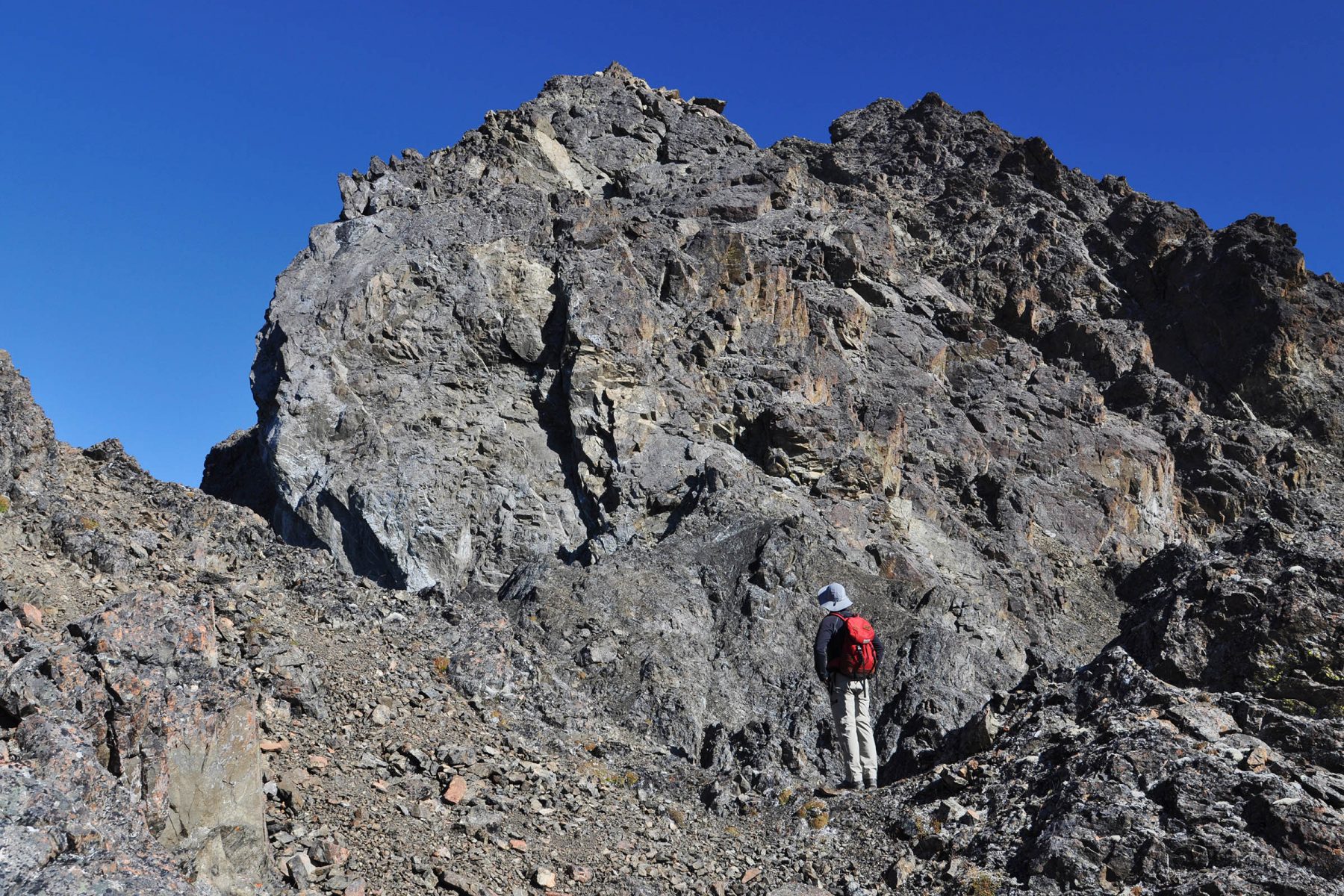 Michael Dickerson at one of several major obstacles on the west ridge route. Whenever you run into something like this, traverse around it on the south face until you can regain the ridge.

Above this small false summit, scramble down into a short, strange col of unmistakably flaky, fine, black rock. Stay to the south side of the mini-col–the north side drops down in an ominously smooth, steep face and then disappears. On the other side of this col is another set of crags that must by bypassed. At this point, you’re above the most serious cliffs on Cantata’s lower reaches and can move more liberally onto the southern face. To keep the route in Class 3, traverse one tenth of a mile onto the southern face of the peak, losing a few dozen feet of elevation as you cross the tops of scree fans. As soon as you find a gulley that takes you back to the skyline, scramble back up onto the west ridge. Don’t traverse too far onto the southern face, or you’ll find yourself doing excessive sidehilling and scree-scrambling. From the black col it’s also possible to traverse only a few dozen feet and then immediately regain the ridge. However, this part of the ridge pushes into Class 4 with increased exposure. 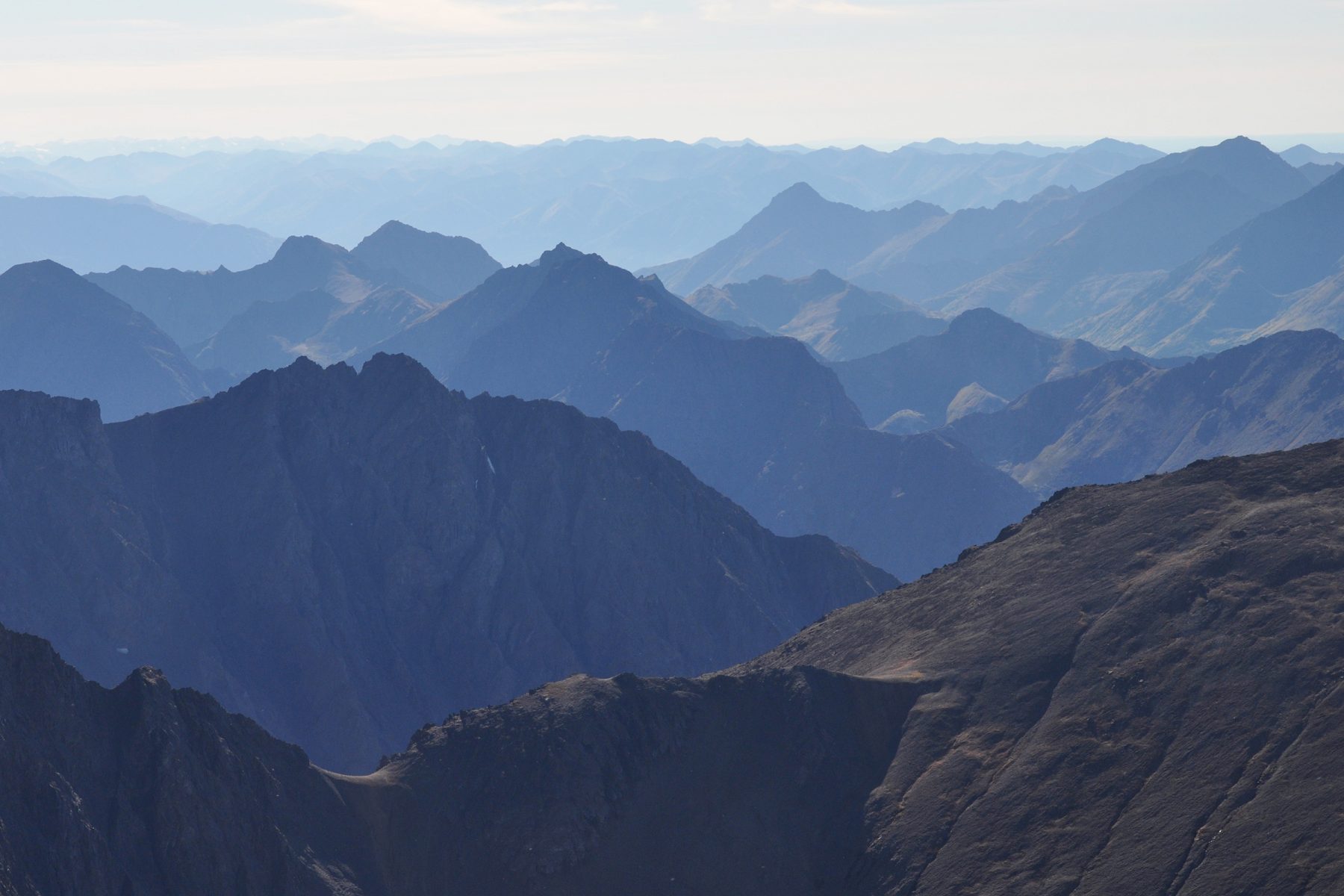 One of the the exciting parts of climbing Cantata is watching the lower peaks of the Chugach drop away as the view opens up. From the summit of Cantata you can see the inlet and far back into the Kenai Peninsula mountains, the entire spread of the Aleutian and Alaska ranges, and far into the glaciated heart of the Chugach Mountains.

The final quarter-mile of the summit ridge is relatively pleasant Class 2+ walking and there is a light trail directly on the ridgeline. The summit is a well-defined shallow point, with one of the finest views in the Chugach. There is a register tucked into a cairn on the summit. Unlike some registers in the Chugach, this one is opened by twisting the block on the top end, rather than the whole end piece. 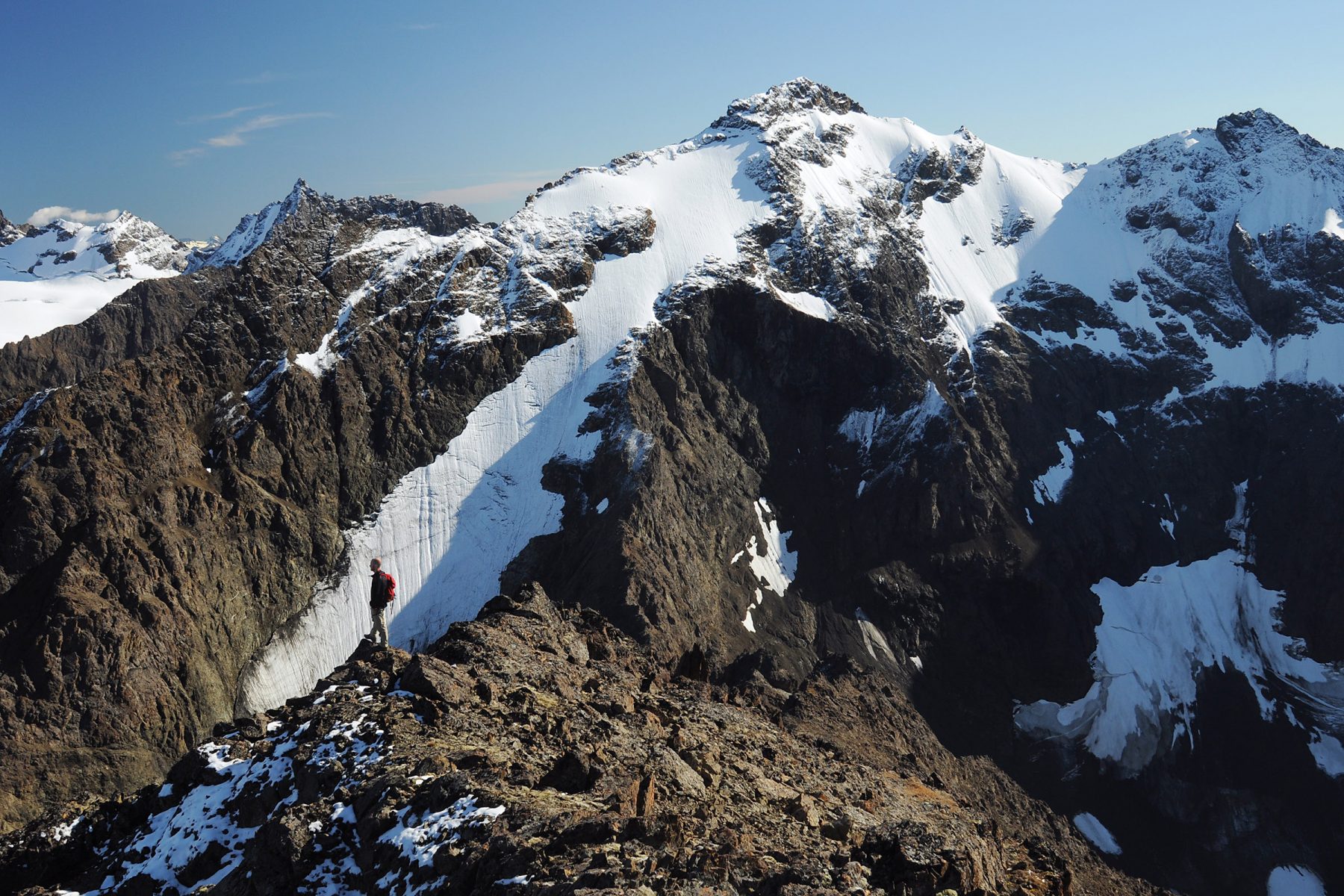 Michael Dickerson standing on the SE ridge of Cantata, just a few feet below the summit. The enormous north face of Calliope (the summit of which is only about 400 feet taller than Cantata) is in the background.

If Cantata is your first South Fork peak, this is an excellent opportunity to scope out the main nontechnical routes up Hurdygurdy, Eagle, and Calliope, all of which are visible from the summit.

Panorama from the summit of Cantata Peak. 6,390 feet of elevation buys you a lot of perspective in the Chugach.

Descend to the col between Cantata and Point 4755 exactly the way you came. If you have extra daylight left, consider taking one of the the “alternate routes” marked on my map. The northern alternate route provides an excellent opportunity to appreciate Cantata’s intimidating north face and scout the approach to neighboring Eagle Peak. The southern alternate route descends a chossy scree field to the beautiful lake tucked between Cantata and Calliope, and then follows game trails through light brush back to Symphony Lake.

Other resources and trip reports