Bold Peak’s cliff-laced summit towers over the southeast end of Eklutna Lake, and to a casual observer the prospect of climbing it unroped might seem somewhere between bold and insane. But due to development around the lake and topographic quirks, the peak is both easier to access and simpler to climb than it appears. The approach only requires a quick bike ride ride around Eklutna Lake, and the popular Stivers’ Gully route sneaks around the back of the peak and bypasses almost all of the cliffs (note: almost). For experienced and fit scramblers, Bold Peak is a adventurous non-technical day climb that offers more elevation and views per calorie than any other big peak in the Chugach. 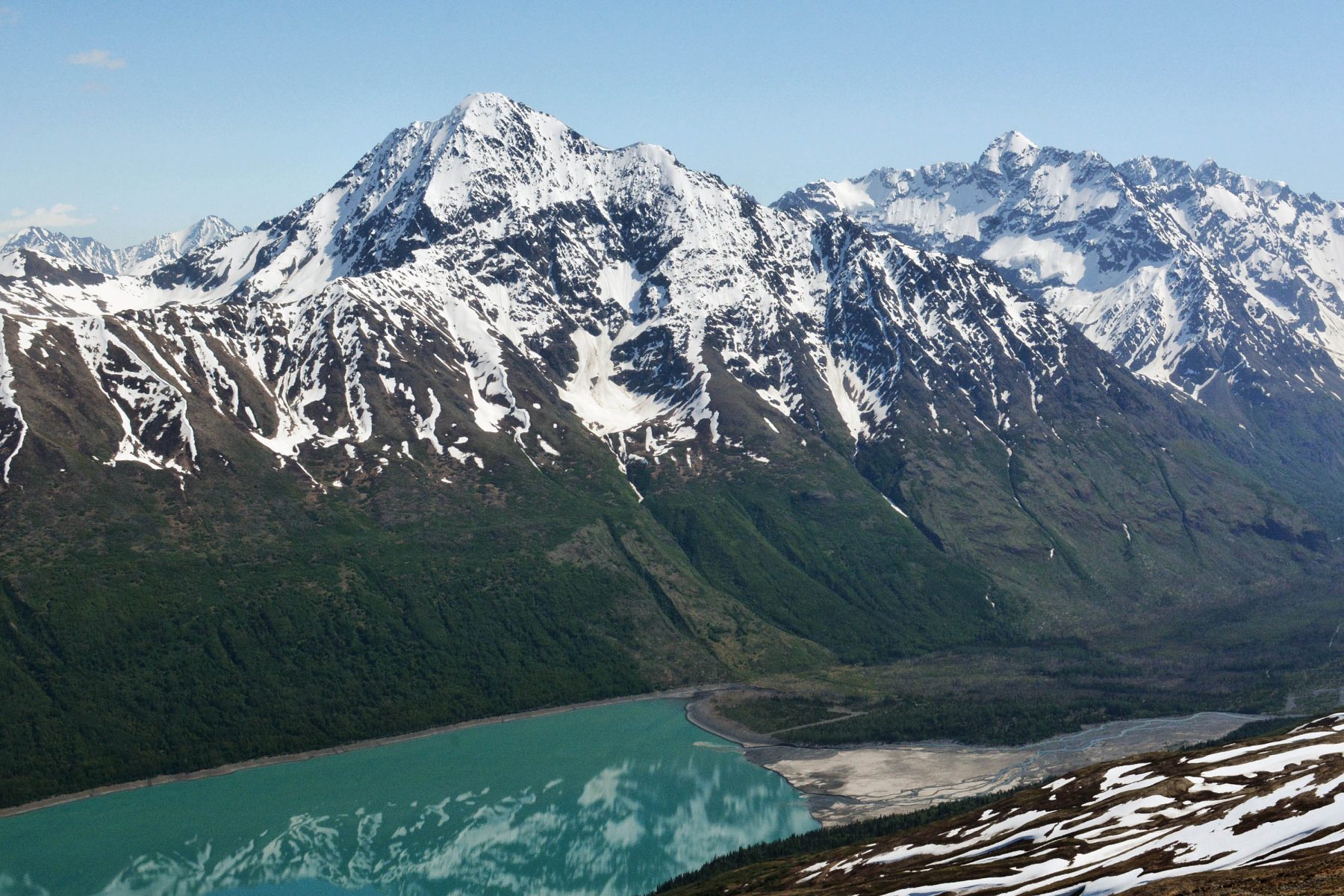 The popular, south-facing Stivers’ Gully route is prone to avalanches during the winter but melts out relatively quickly in summer. The peak is often climbed between early June and the first significant snowfall, which typically occurs in September or early October. Spring climbers should have thorough working knowledge of avalanches (especially cornice drops) and exercise caution, particularly if the crux out of Stivers’ and the steep meadows above are covered in snow or ice. By late June or July the critical parts of the route are typically snow-free, though patches of snow may linger on the southeast face till fall or never melt at all.

Though there are several possible nontechnical routes on Bold, the overwhelming favorite is up Stivers’ Gully. This route was pioneered by local climber and former Mountaineering Club of Alaska President Bill Stivers, and combines a fast approach with interesting terrain and overall low technical demands. 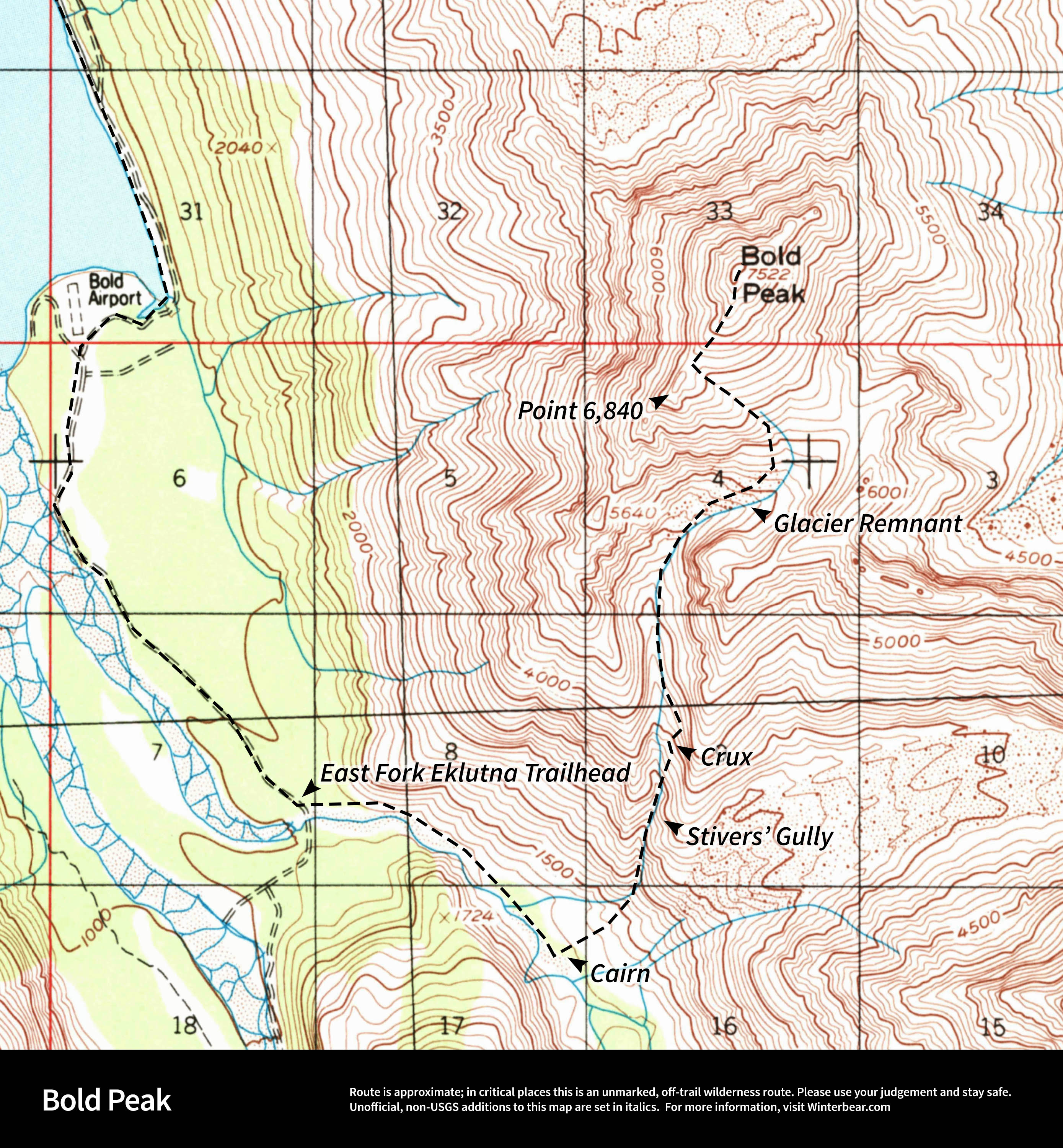 Map of the Stivers’ Gully route up Bold Peak. Note that the East Fork Eklutna Trail is not marked on this map.

To approach the Stivers’ Gully route on Bold Peak, park at Chugach State Park’s Eklutna trailhead (annual parking pass or $5 one-day fee required) and ride 10.5 miles down the well-marked bike path around the northeast side of the lake. The bike path generally hugs the edge of the lake, repeatedly merging into and diverging from a dirt road. At the end of the lake, the bike path and road merge for good. The riding is easy and relatively flat. The road may or may not be open to authorized vehicles and 4-wheeler traffic. Consider making noise to warn bears. 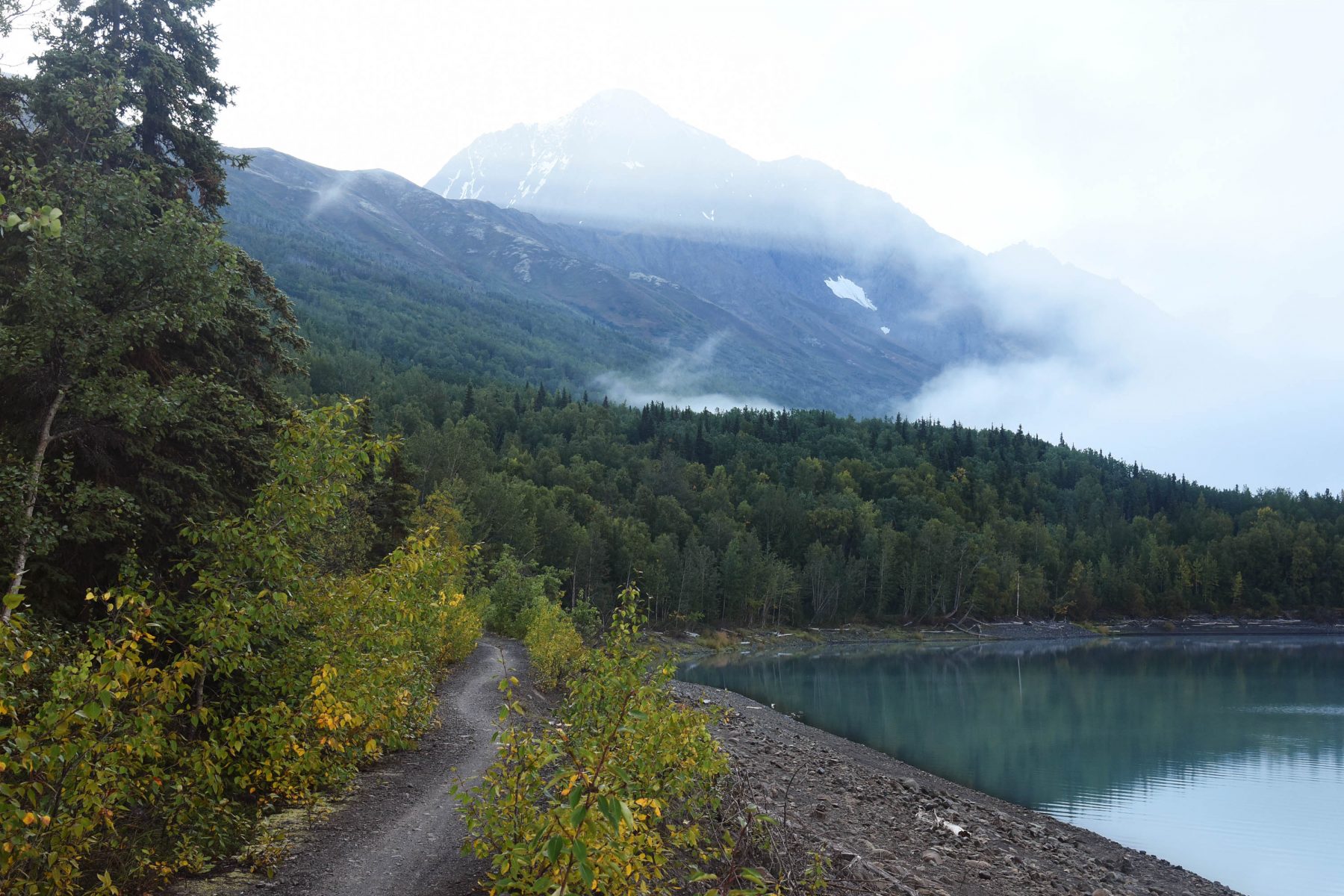 Bike path around Eklutna Lake, with Bold Peak in the background

There is some dispersed development at the end of the lake, including several camping areas, an airstrip, and the Serenity Falls Hut. Continue riding the road upvalley until you come to the signed East Fork Eklutna Trail. Stash bikes in the woods and continue 1.2 miles up the East Fork Trail on foot to the base of Stivers’ Gully.

The East Fork Eklutna Trail crosses an overgrown stream bed directly below Stivers’ Gully. In spring there may be running water here, but by early summer it is usually dry. Look for a cairn on the far (east) side of the stream bed, which marks the beginning of a faint quarter-mile-long trail to the mouth of the gully. The trail winds back and forth over the dry stream bed and is generally easy to follow, though the consequences of losing it are low. At an elevation of about 1,500 feet, the trail reaches the mouth of Stivers’ Gully and disperses onto the scree.

Stivers’ Gully is often maligned for loose rock, but in reality the scree scrambling here–especially toward the bottom of the gully–is excellent by Chugach standards. Stay on the largest rocks, which are generally stable. Avoid “trails” up loose fans of pebbles during the ascent: these are for scree surfing on the way back down. 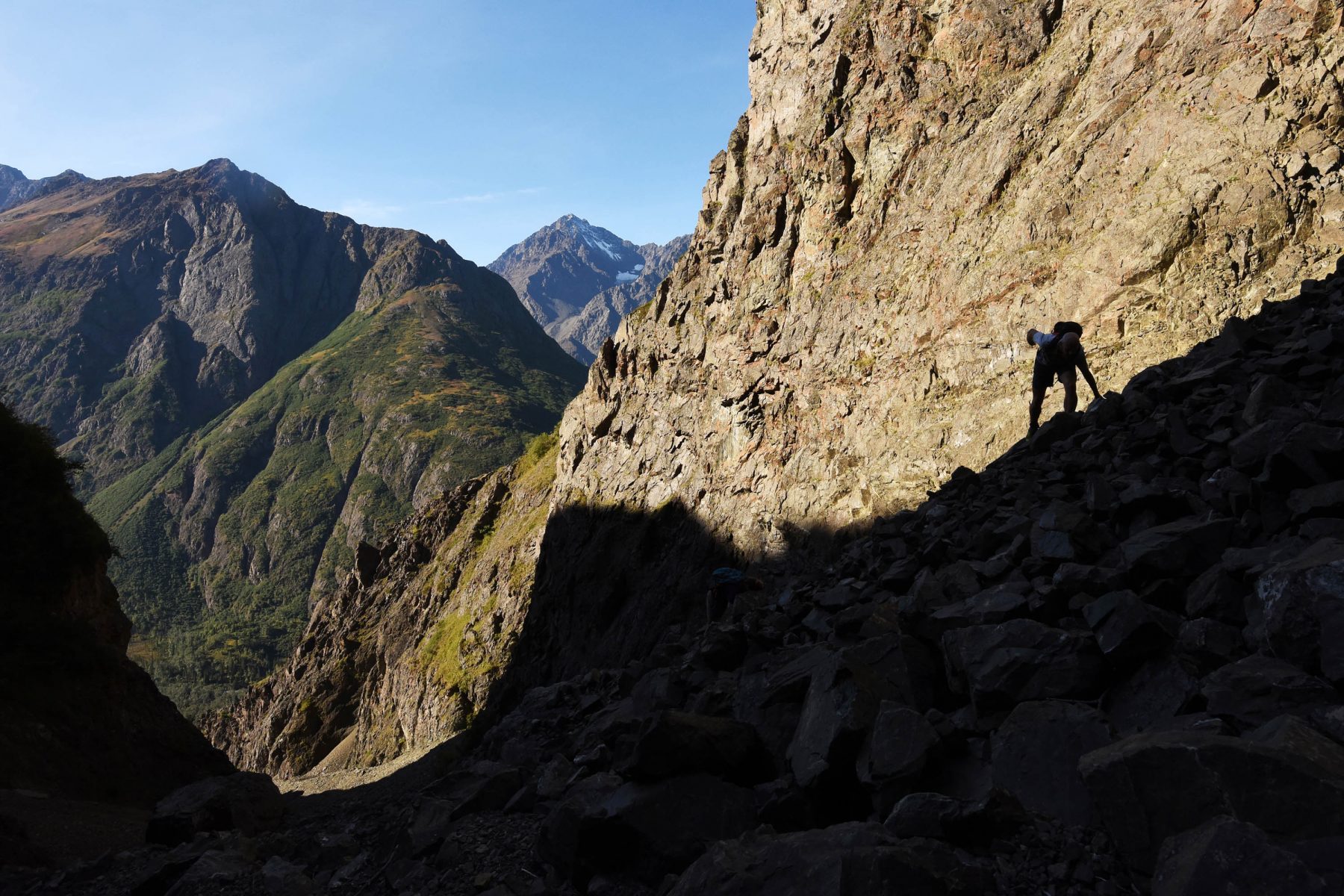 At about 2,800 vertical feet Stivers’ Gully relaxes into a mossy oasis with a small gurgling stream, and then splits into three forks. Do not follow the stream up the central fork. Instead, follow the prominent scree trail up the right-hand (easternmost) fork. This fork rapidly steepens as it climbs toward a rocky rib. You may spot one or more fixed ropes on top of the rib dangling down onto the trail. 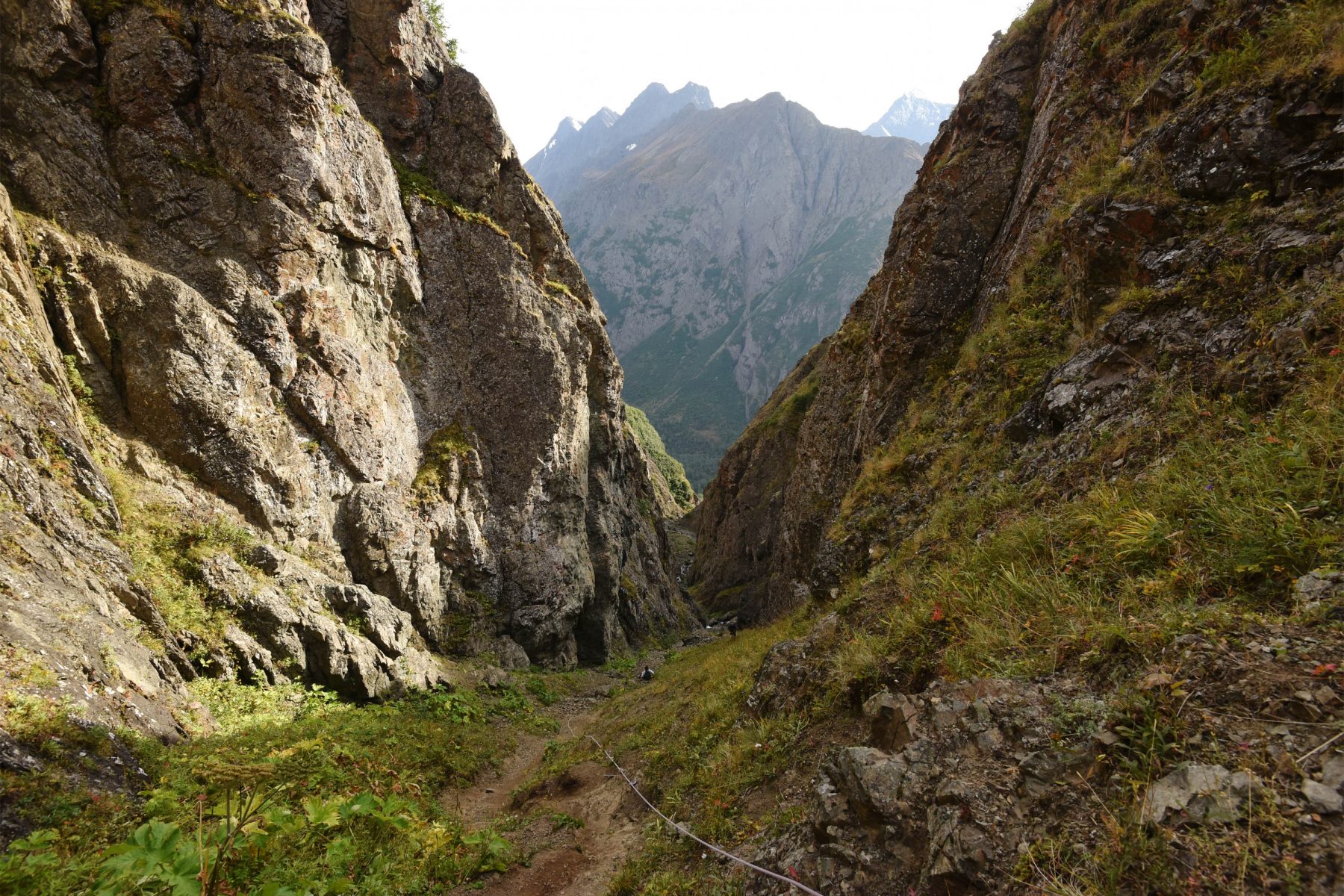 Ropes dangling from the rocky rib out of Stivers’ Gully

The climb out of Stivers’ Gully onto the steep meadows above is the crux (most difficult part) of the Stivers’ Gully route. While the rest of the route falls between Class 2+ and 3 territory (hiking and scrambling), this short section qualifies as Class 4 (light climbing) because it requires deliberate hand and foot placement to avoid exposure. In general, experienced and careful Chugach veterans will find it unnerving but do-able, while anyone with technical mountaineering or outdoor climbing experience will probably breeze past. This section is not appropriate for inexperienced outdoorspeople or those with debilitating fear of heights. The climb requires serious caution in fog or rain, and if this section is covered in snow or ice it may require technical tools to complete safely. 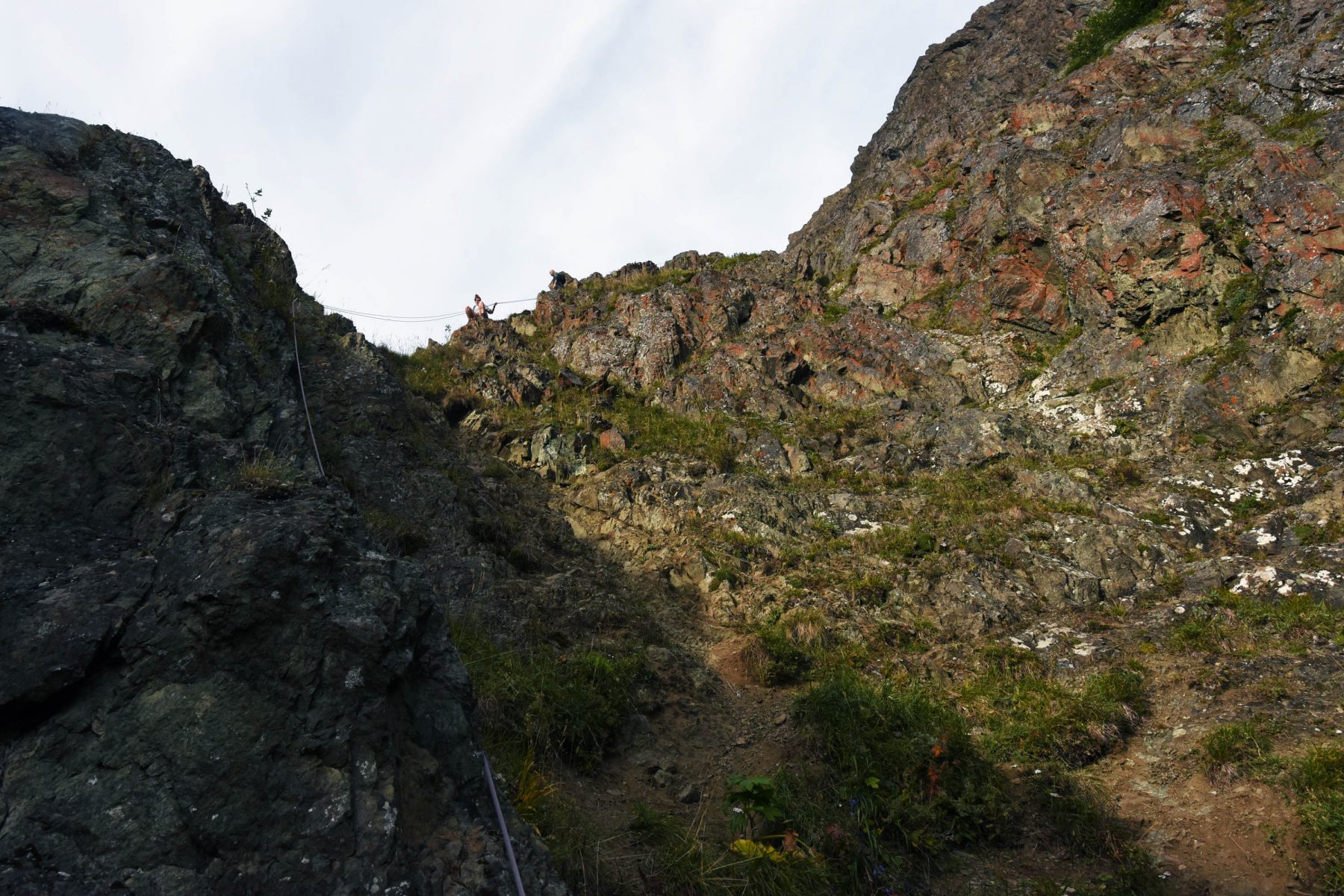 Chelsea Covalcsik and Greg Martin on the crux

Climb to the top of the gully and to the crest of the rocky rib, using the fixed ropes for balance as necessary. In general one should never trust unknown ropes, but the same could be said of most Chugach rocks. It is probably best to see the ropes as one of several ways to stay balanced but they should not relied on exclusively. Note that using the ropes can shake scree off of the rocky rib and onto people in the top of the gully below. 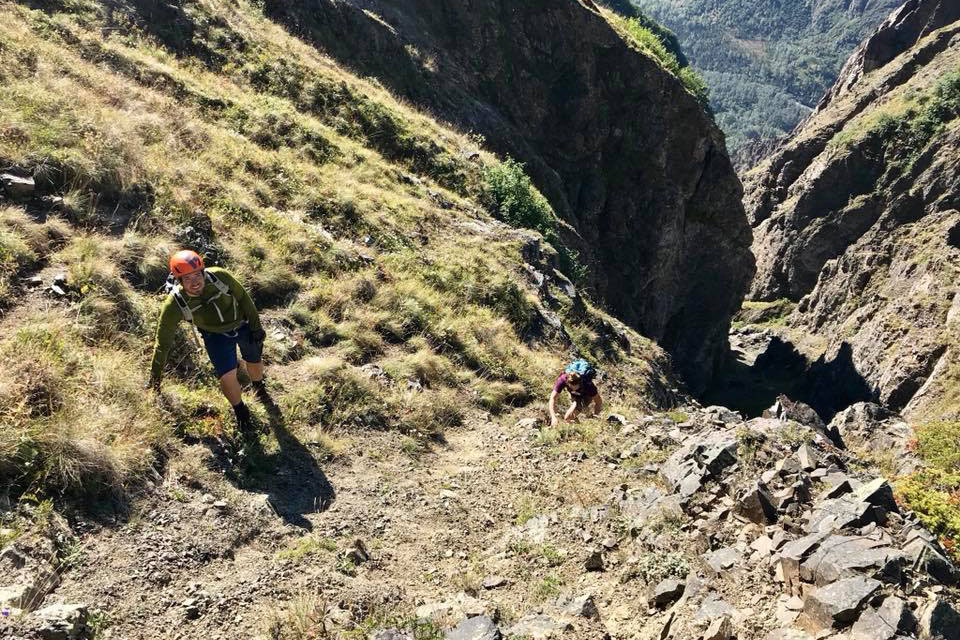 The author and Chelsea Kovalcsik climbing onto the steep meadows above the Stivers’ Gully crux. Photo: Greg Martin

On the way back down the peak, remember that the sheep trail does not lead to the descent back into Stivers’. Turn around and memorize the exact spot at which you should leave the sheep trail and descend back to the rocky rib. Personally, I find that this whole portion of the route looks worse from above than from below, which is why it is important to familiarize yourself with it on the ascent. 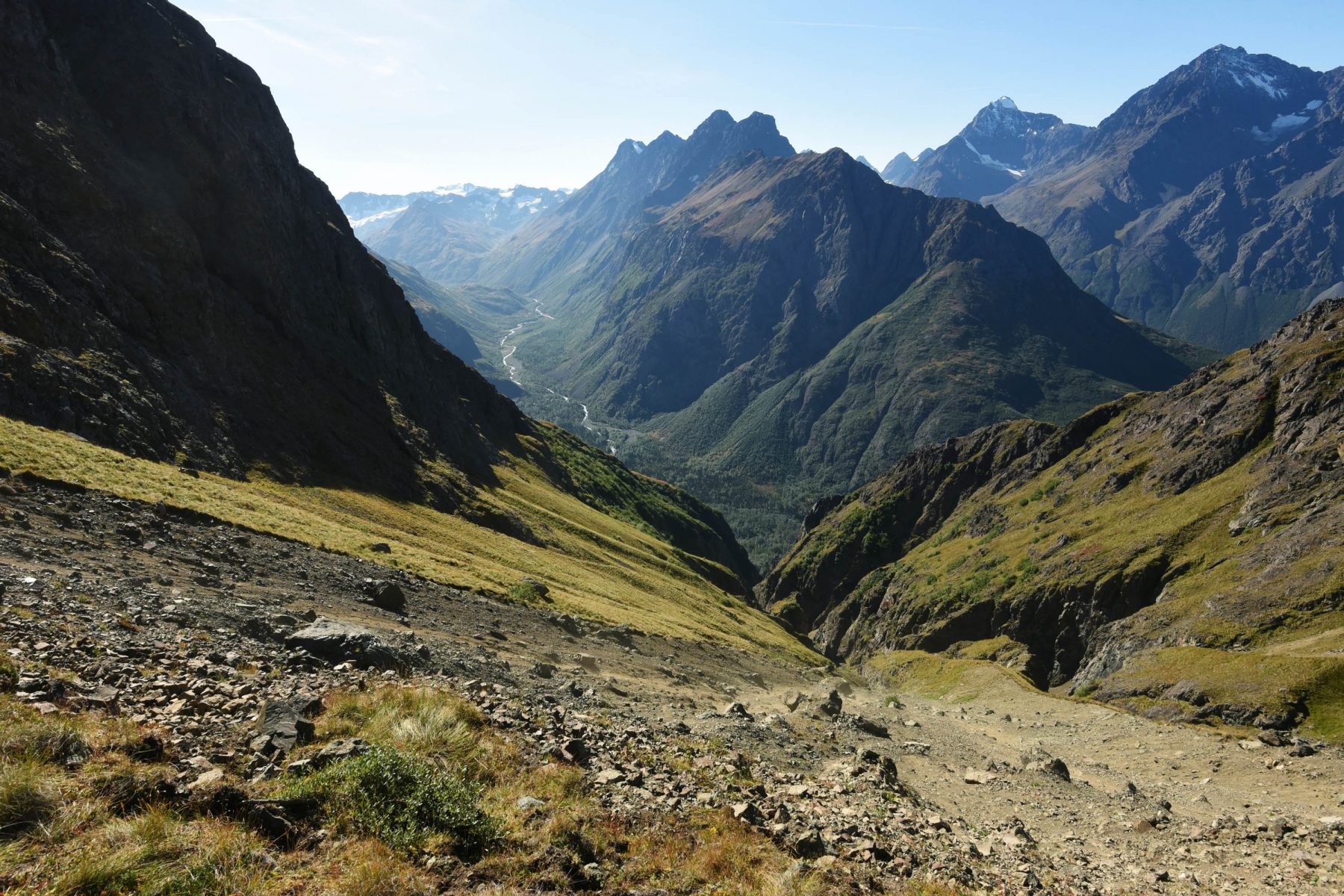 The steep meadows above Stivers’ Gully

Follow the sheep trail for about 200 feet and then cut directly uphill until you reach another sheep/hiker trail at the base of the cliffs. Follow this trail for another 600 feet around the top of the steep meadows until you reach the middle of the valley. The route from here on is much easier, though there is still plenty of elevation left!

Continue up the trough of the choss-filled valley for about 1.2 miles, following faint trails where possible. The angle of the slope here is significantly lower than that of Stivers’ Gully, and permits fast walking. 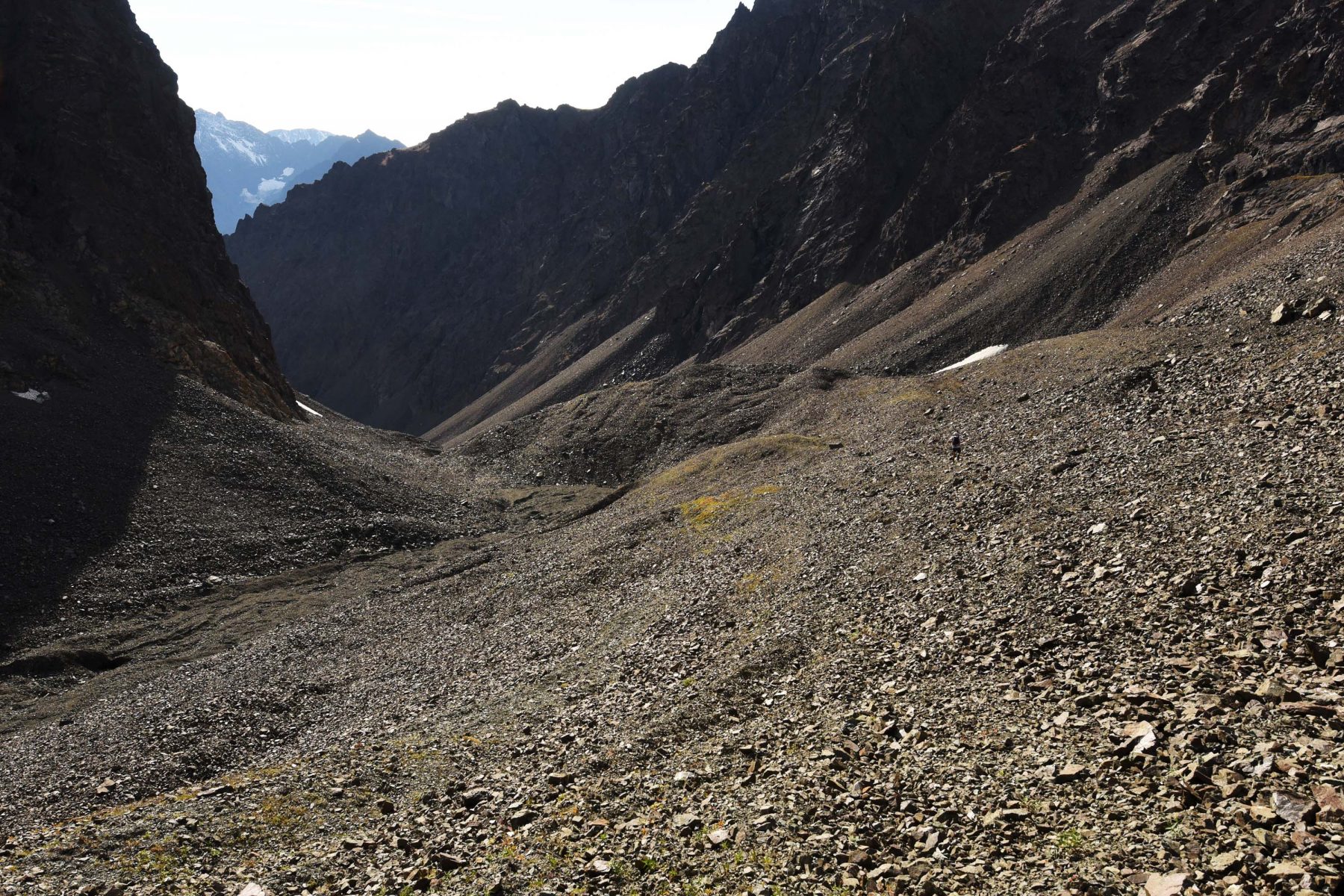 Some routes through this valley are more stable than others, but be prepared for loose rock everywhere. Gaiters can help keep pebbles out of boots and shoes.

At the head of the valley is a small, half-buried remnant of the cirque glacier that carved this route thousands of years ago. Scramble past the dying glacier and onto the sweeping, chossy southeast face of Bold Peak.

From this point, there are many workable routes to the summit. Some hikers continue to the pass southeast of the summit and then ascend, but better footing can be found by turning northwest, hugging the rocky ridge between the cliffs and scree fields, and aiming for the col between Point 6,840 and the summit. 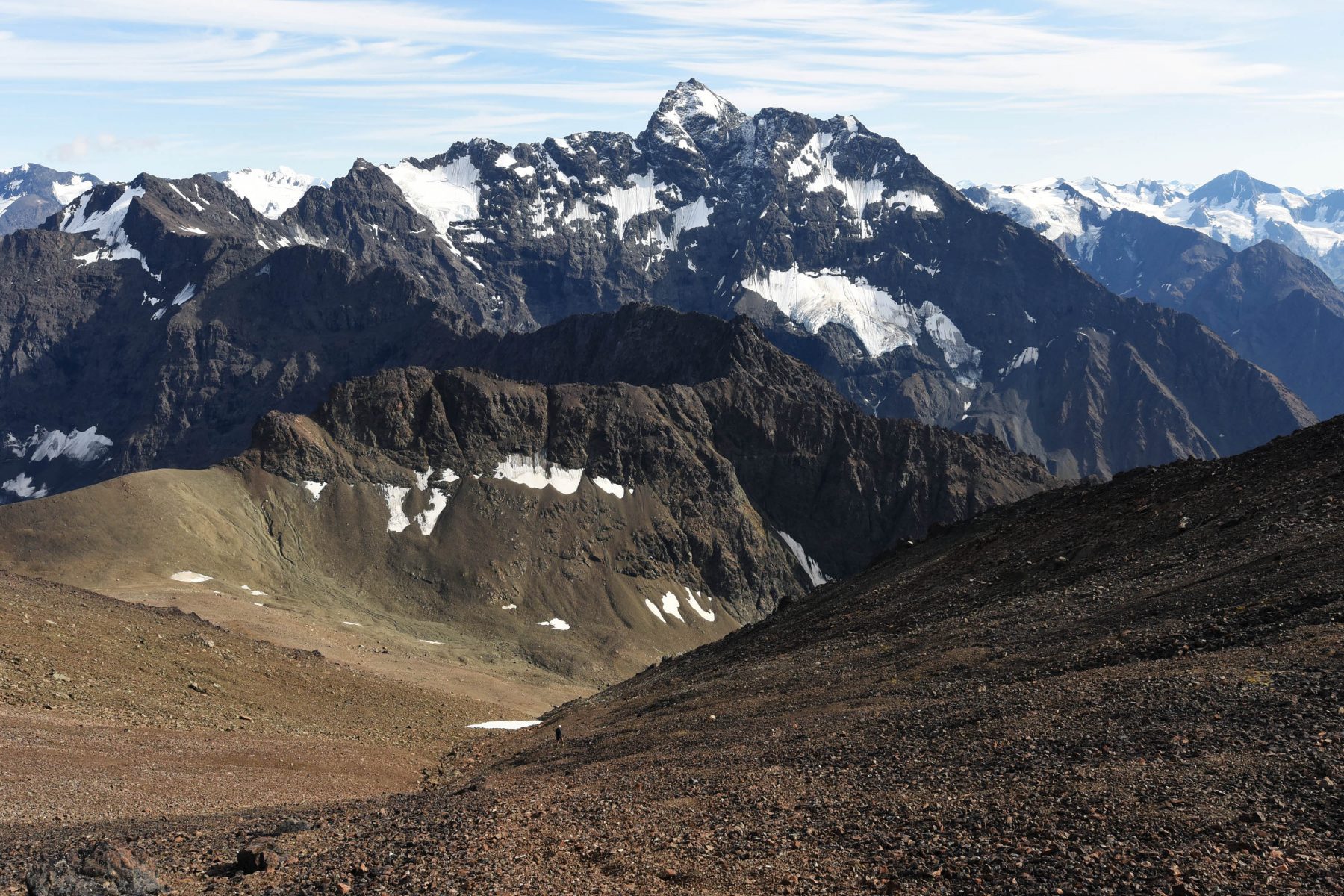 The chossy southeast face of Bold Peak, with Bashful Peak in the background

From the col, follow the faint trail on the summit ridge four tenths of a mile to the top. Older USGS maps put the summit at 7,522 feet, while newer data suggests an elevation over 7,600 feet. Regardless of its exact height, the summit views here are indisputably breathtaking. The entire Talkeetna Range is visible unobstructed to the north, stretching off into the blue distance and merging with the Alaska Range, which in turn arcs across the horizon and merges with the Aleutians to the southwest. To the southeast is the immense and almost stupifying ocean of rock and ice of the Central Chugach Mountains. Plenty of folks have seen these glaciers from the decks of cruise ships. From the summit of Bold, you look down into their blue crevasses. 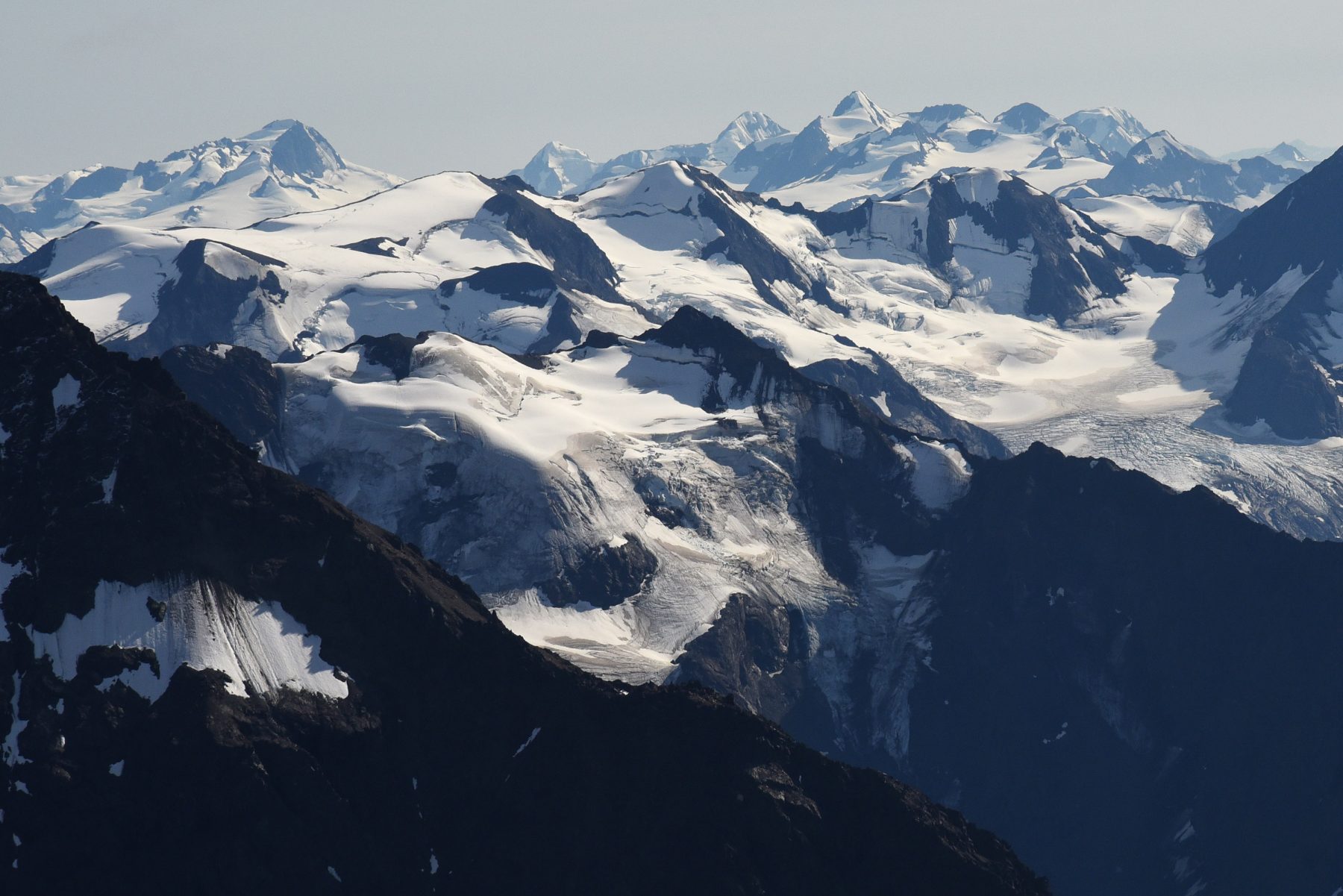 A small fraction of the seemingly endless mountains, glaciers, valleys, rivers and lakes visible from the summit of Bold Peak

Enjoy the views as long as you can, but watch the weather and remember: it’s a long way down.

the coolest thing about Bold is the distant potential of Bellicose

I wanted to update your position of the start of Stivers Gully in case anyone used GPS. I was just there last Saturday and this is the map location.